The mother of a woman whose unidentified body was found at the base of a building in Washington DC arrived in the city to bring her daughter home – not knowing she had plunged to her death just hours earlier.

Meghan Godfrey was a long way from home, in Yungaburra, Queensland, when she was reportedly robbed of her wallet and ID on the streets of the US capital.

The 27-year-old, who family described as ‘charming, trusting, personable and full of adventure’ wound up living on the streets in the months before her death.

Meghan’s mother Janelle Moncrieff arrived in the city on the 17th of July to search for her, not knowing at the time that her daughter’s body was sitting in a morgue waiting to be identified.

But Meghan is believed to have fallen from an office building at George Washington University on July 16th. Her body was yet to be formally identified.

Ms Moncrieff told Daily Mail Australia it has been ‘a trying time’ for her family.

She spent the morning arranging for Meghan’s remains to be transported back to Australia – a devastating and costly task in itself. 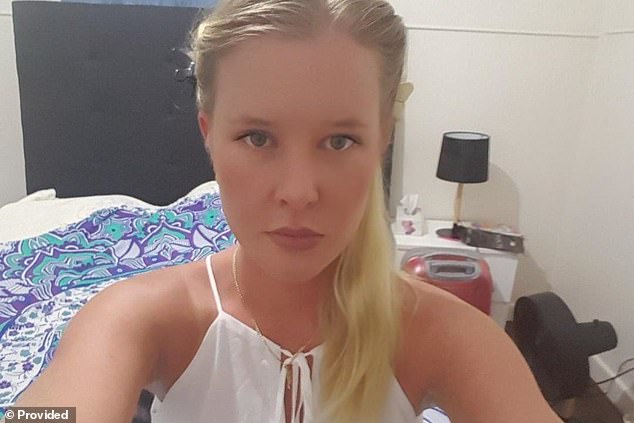 Meghan Godfrey was a long way from home, in Yungaburra, Queensland, when she was reportedly robbed of her wallet and ID on the streets of the US capital 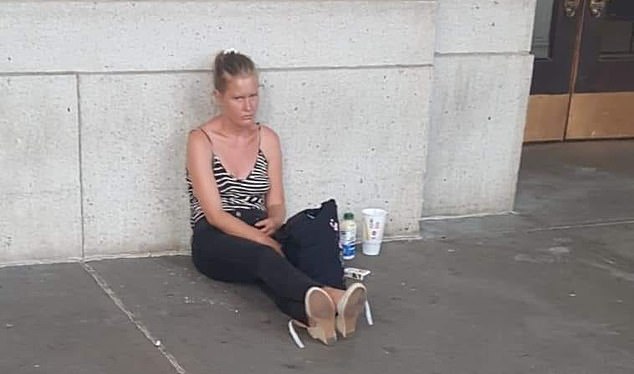 The Australian woman wound up homeless after she was robbed of her ID and wallet. Photos showed her sitting on the street outside of a building in the same top featured in the composite image

‘They have been humbled and blown away with all the support that has come forth,’ she said.

Witness Ansley Bolick said she was working in the building at the time.

‘My understanding is that she was alone… There is no reason to be on that floor of the building other than working there, it is all office spaces,’ she said.

Just a week before her death, Meghan was spotted in the DC region wearing black jeans and a black and white zebra-striped top.

She appeared dishevelled and was sitting on the street outside of a building with a tote bag, cigarettes and a fast food takeaway cup. 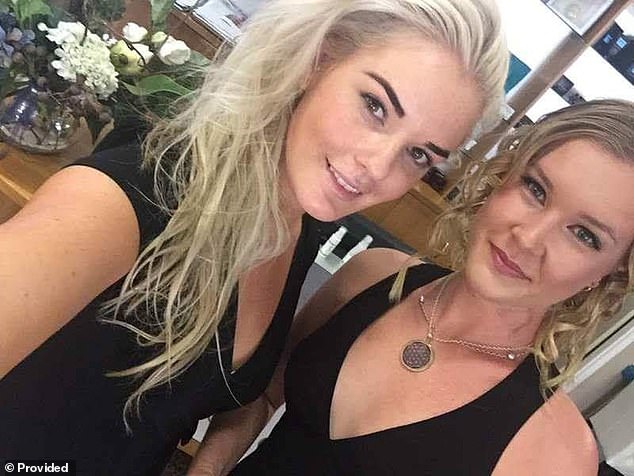 Meghan (pictured right) is believed to have fallen from an office building at George Washington University on July 16th. Her body was yet to be formally identified

That image, as well as several others, was shared by women’s outreach organisation HER Resiliency Centre – which specialise in helping women who are experiencing homelessness or victims of human trafficking.

They said Meghan had been living on the streets and was ‘extremely vulnerable’ and that she had recently contacted her mother back in Australia to help bring her home.

Simultaneously, true crime groups across the same region were being notified of the death of a woman at George Washington University.

The then-unidentified body was found at the base of a building on campus.

Based on the information they could gather, the National Missing and Unidentified Person’s System released a composite image they created that they believed would resemble the woman in her life. 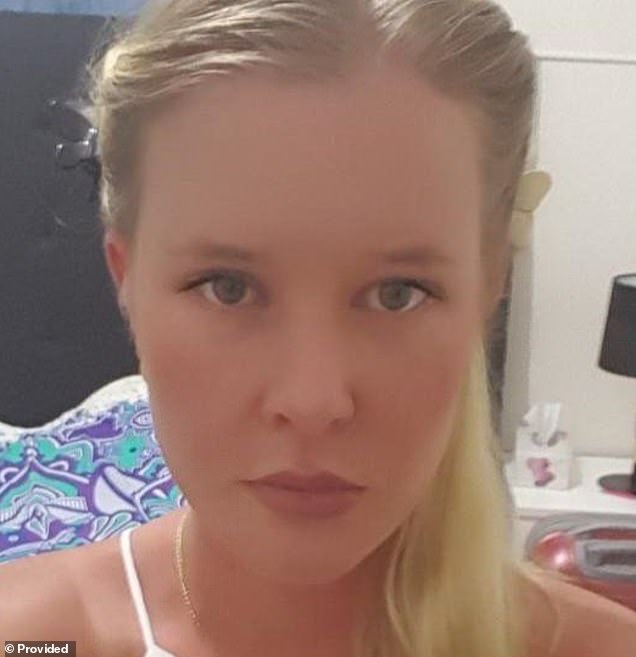 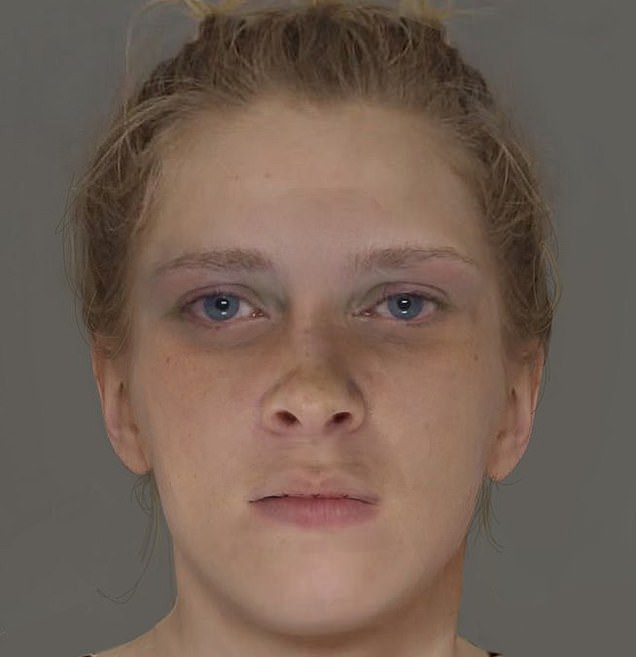 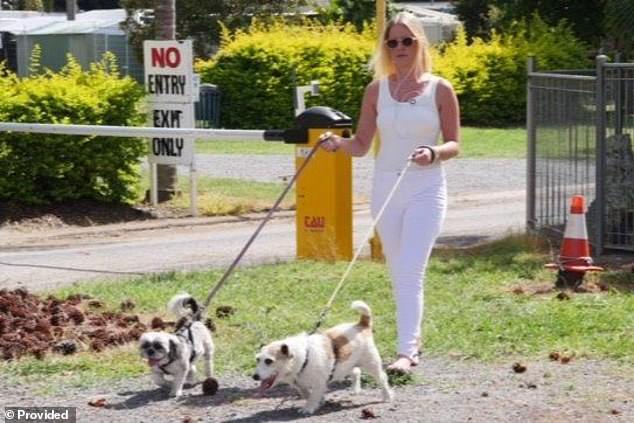 They were near perfect in their construction – and it is that composite image that meant Meghan’s family were reunited with her – albeit not the way they hoped.

One of the first people to realise Meghan and the woman in the composite image were one and the same said her ‘heart sank’ when she recognised the similarities.

‘After seeing the post I went back to an original story I read about this woman because she looked so familiar,’ she said.

‘My heart sank when I looked through her profile.’

Another said: ‘I have seen tons of unsolved cases on here and read them and looked for possibilities on other cases but never felt so drawn to “help” until last night.’

‘Imagine if her mom went back to Australia after she couldn’t find her. And the unknown deceased in DC never made the news it could have been a old Jane Doe unsolved mystery in 20 years.’

‘I think you ladies just solved the case,’ a fellow true crime buff wrote. ‘The similarity is uncanny.’ 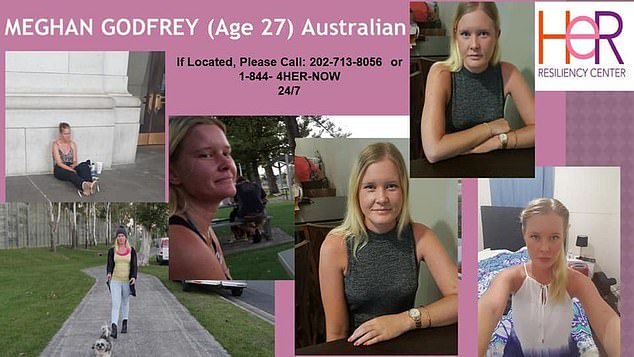 Women’s outreach organisation, HER Resiliency Center released photos on social media on Sunday in hopes of tracking down Meghan who was last seen at Washington’s Union Station on Friday and described to be in a ‘vulnerable state’ 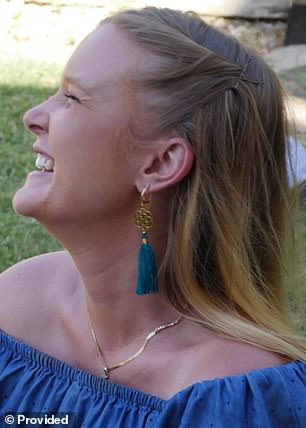 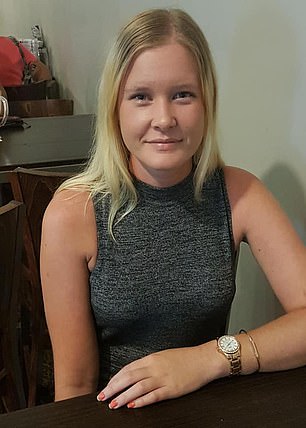 The 27-year-old, who family described as ‘charming, trusting, personable and full of adventure’ wound up living on the streets

When the composite image surfaced on true crime pages, members of the community were quick to point out a startling resemblance to a missing, homeless Australian woman they had seen on flyers.

Photos of Meghan came pouring in.

As did links to her profiles, and the initial post by the outreach centre hoping to find her alive and well.

The zinger, members of the groups said, was that the composite image featured a small portion of a zebra striped singlet top – the same one Meghan was wearing in the last known photo of her.

A short while later, one of the members of the group made an official tip to the authorities, who were able to finger print the body and confirm it matched prints of a Ms Meghan Godfrey.

Her mother, still hopeful she was on a rescue mission to bring her daughter home to Australia, received the distressing news. 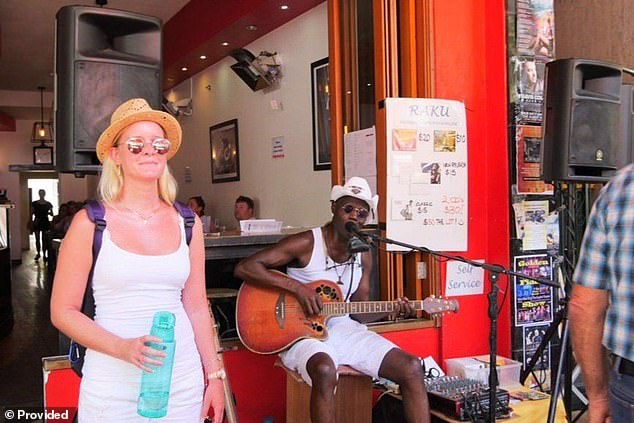 Pictured: Meghan while holidaying before her life was changed forever after she was reportedly robbed

Ms Moncrieff is shocked and distraught at the outcome, believing she was travelling to America to bring her daughter home with her (pictured together)

A corpse believed to be Meghan’s was found, and they wanted her to identify the body, police told her.

Ms Angell, who is now fielding questions on behalf of the family, previously appealed for assistance in locating Meghan.

The centre she works with revealed Meghan had emailed her mum two weeks earlier asking her to take her home saying she was ‘ready to go back.’

‘At the beginning of this week our outreach team met with a woman who travelled here from Australia in search of her missing daughter (Meghan Godfrey), who was recently sighted in Washington D.C.,’ she said.

‘The daughter is in a vulnerable state, had her wallet/ID stolen, and is currently living on the streets. We have been unable to locate her since Friday. Pictures of her are below in the hopes that perhaps one of you might have seen her more recently.’ 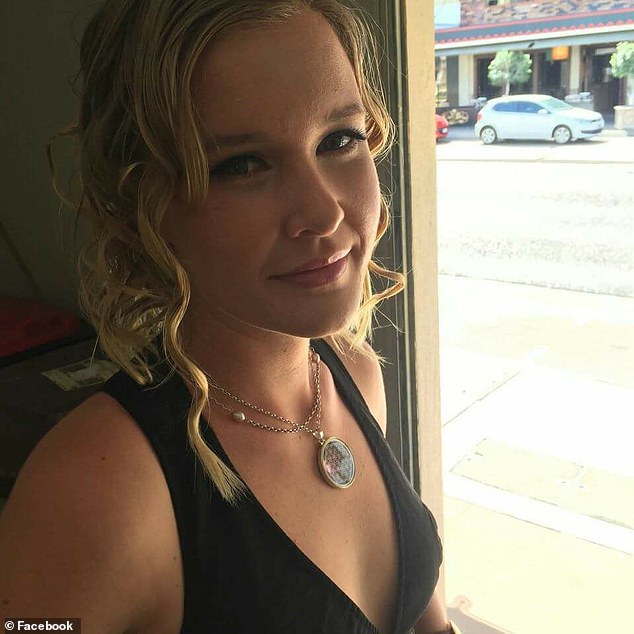 Meghan Godfrey, 27, from Yungaburra, Queensland, was found dead at the base of a building of George Washington University

‘The daughter did send her mother an email two weeks ago asking her to come take her home…that she is “ready to go back.” That is why her mother is here.

‘She is not going to leave until her daughter is found,’ the post read.

‘We are saddened that earlier this evening we learned Meghan is no longer with us. We hope she is in peace and pray for her family,’ Natasha Guynes, another representative, said sometime after.

Administrators for the group where the connection was first picked up have also since confirmed the ID’s are a match.

‘Following the tips, the police have matched the fingerprints of the deceased woman to Meghan’s prints and they are in the process of formally identifying her,’ a statement read.

Ms Godfrey’s mother formally identified the body and is now in the process of bringing he daughter home to Australia.

She said she would be grateful for any contribution made to assist with costs or raising awareness of the GoFundMe appeal.