Mother of quintuplets, 30, reveals what it’s really like raising a family of TEN

A young mother who gave birth to quintuplets has revealed what it’s really like to raise eight children – and the top tricks she’s learned after several years on the job.

Kim Tucci, 30, from Perth, had three children four years ago and thought she would be ‘four and done’, when she became a one in 55 million statistic and gave birth to Australia’s first ever naturally conceived quintuplets.

Four years later, Kim’s quins are about to start kindergarten next Monday, giving their exhausted mother a small amount of respite in her busy schedule of toilet training, feeding, washing and cleaning.

Now, Kim has shared her top parenting tricks exclusively with FEMAIL – including the foolproof method she uses to remove stains from tiny clothes. 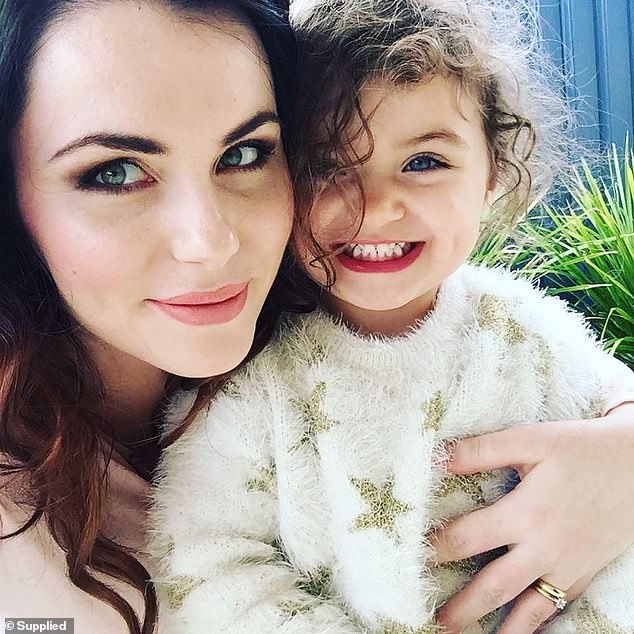 What are Kim’s top parenting tricks?

What are Kim’s top parenting tricks?

* Remove the toilet brush from the bathroom while toilet training.

* Keep talcum powder in your car to get rid of excess sand after a trip to the beach.

* Keep nappies everywhere so you’re never caught without – from the car to the garage and the house.

When it comes to parenting, Kim said she’s learned a few things over the 12 years she has been a mum.

‘It’s so chaotic and overwhelming in our household,’ she told Daily Mail Australia.

‘Every day is a marathon and so I need to have a few methods in place to help to keep me sane.’

Kim said that last year was a particularly ‘difficult’ year as she was toilet training all of the quins – and going through as many as ’30 pairs of undies each day’.

‘The best thing I’ve learned with the toilet training is that you need to remove the toilet brush for the duration of the training,’ she said.

‘Otherwise, they’ll all just be playing with it and trying to put it in their mouths without realising it’s not to be eaten.

‘You should also keep nappies absolutely everywhere – including the car and the garage.

‘There are times when I haven’t had enough on me and there has been a poo explosion.’ 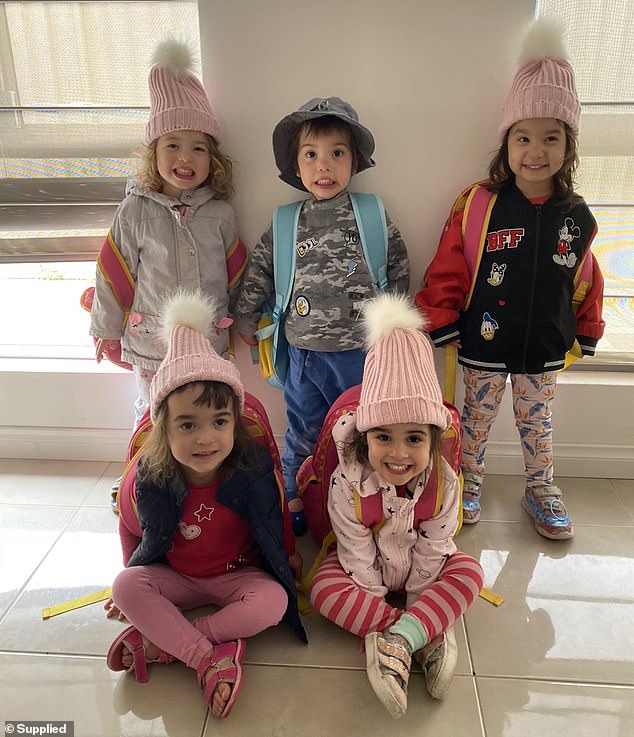 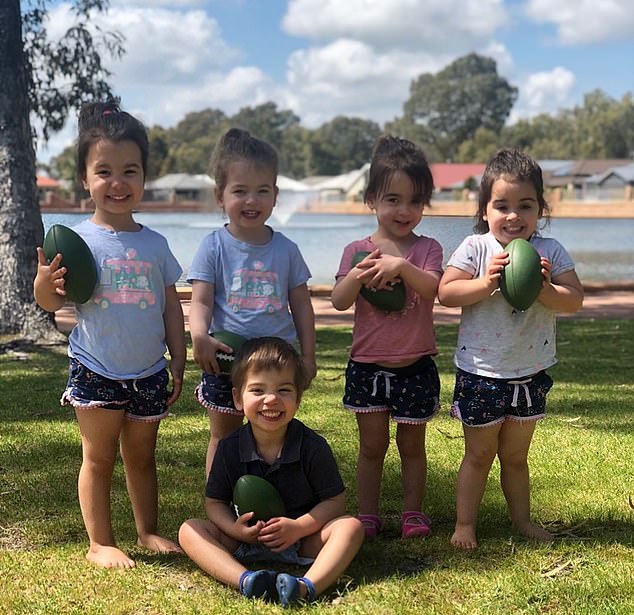 It’s not just toilet training where Kim has a few tricks up her sleeve.

She also swears by soaking her kids’ clothing in boiling water for several hours to get rid of berry stains.

‘One of the best things I’ve picked up is keeping some talc in the car for after a day at the beach,’ Kim said.

‘You just rub it on their sandy bodies and they won’t carry it into the car with them.’ 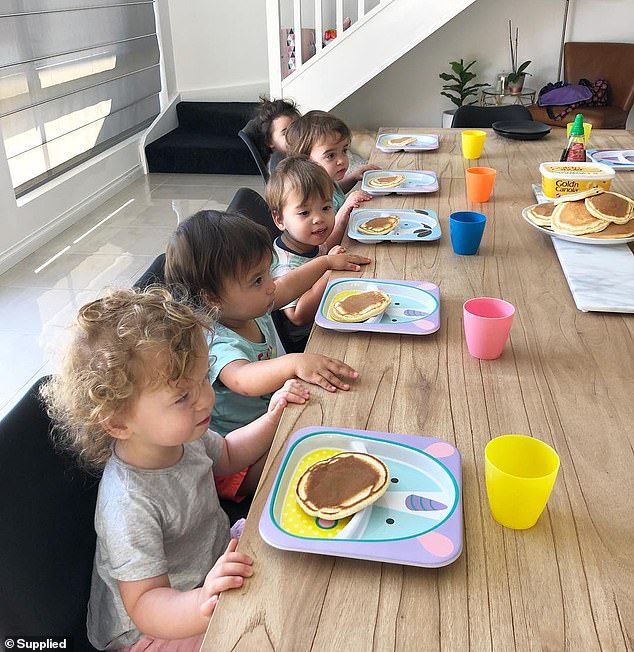 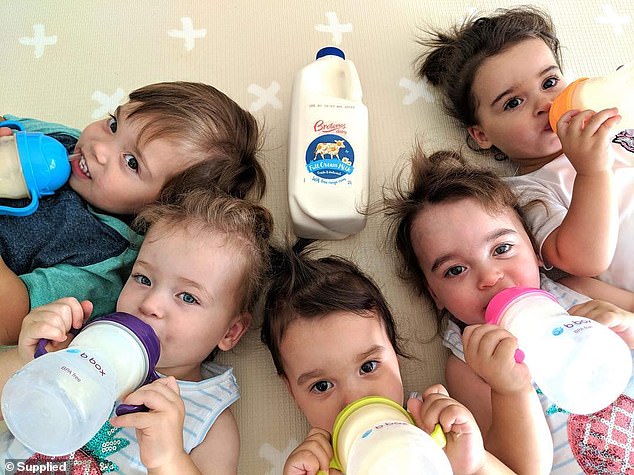 Kim said her family go through eight or nine loaves of bread a week, 60-70 pieces of fruit, 20 litres of milk (quins pictured drinking) and a giant block of cheese

How does Kim budget for her large family?

What are Kim’s top budgeting tips?

* Shop around and go to multiple supermarkets in order to get the best deals.

* Embrace Flybuys and make sure to activate the rewards before you go shopping. Kim is using all of the money she saves for Christmas presents.

* Bulk buy the items you know you are going to need like laundry liquid and washing powder.

* Buy your fruit and vegetables in bulk to save money.

* Cook everything in one big cook up to ensure everything gets eaten.

* Buy homebrand items and choose the cheapest items for every food type. They are often just as good.

Kim has also learned how to best budget for her little ones – confessing she only spends $350 on feeding her family of 10 each week.

‘I usually do a big shop at the weekend and go to Coles, Woolworths and Aldi to make sure I buy from the cheapest supermarket,’ she said.

‘I also buy all of our fruit and vegetables from a local market, as it’s cheaper.’

Kim said the items that go down fastest in her household are what you might expect: bread, milk and cheese.

‘We probably go through eight or nine loaves of bread a week, 60-70 pieces of fruit, 20 litres of milk and a giant block of cheese,’ she said.

The mum-of-eight said she is ‘lucky’ insofar as none of her children are fussy eaters.

‘But I do have a recipe up my sleeve that ensures they eat all the vegetables they might complain a bit about,’ she said.

Kim said if she can’t be bothered to properly cook one night, she’ll simply heat up some spaghetti, chuck all of her leftover vegetables including sweet potato, pumpkin, carrot and zucchini into the oven with their skins on and then whizz them up in the blender.

‘I turn that into a pasta sauce and add some meat sometimes and they have no idea they’re getting so much veg,’ she said.

She also likes to get ahead of the breakfast rush – by preparing big batches of porridge that just need to be heated up in the morning and ensuring all the bowls and spoons are ready the night before. 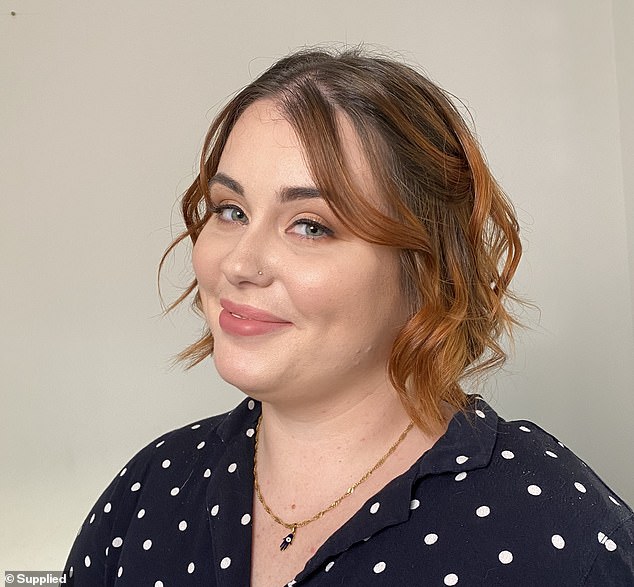 Kim (pictured) said if she can’t be bothered to properly cook one night, she’ll simply heat up some spaghetti, chuck all of her leftover vegetables including sweet potato, pumpkin, carrot and zucchini into the oven with their skins on and then whizz them up in the blender 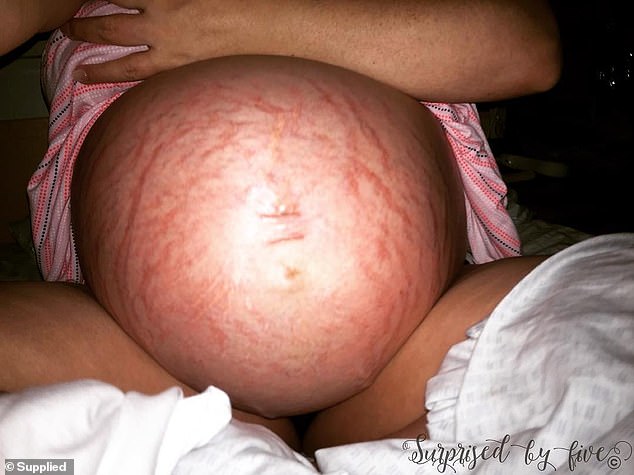 Kim said she is always asked whether the quins were IVF, and she has to go into the ‘whole story that no, they were completely natural, and it was a one in 55 million chance’

What does Kim get asked the most?

Questions from strangers are part and parcel of having quintuplets and three other children, but Kim said there is one question she gets more than any other.

‘Everyone asks whether the quins were IVF,’ she said. 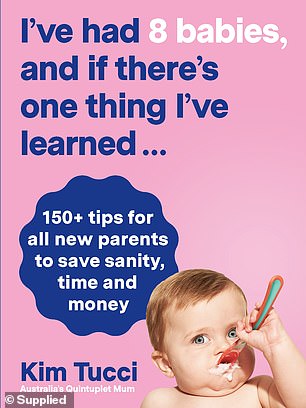 ‘And I have to go into the whole story that no, they were completely natural, and it was a one in 55 million chance.’

People also ask the 30-year-old if she is coping a lot.

‘It’s hard to answer that one as I don’t always feel as though I’m coping,’ Kim said.

‘But I have to make the most of my situation.

‘I have found over the past few years that I burn out if I keep going, so now if the quins are having some quiet time, I will leave the dishes and whatever else needs doing and go for a nap.

‘There is always something that needs doing, but I have to schedule time for myself. Plus, the kids are really good.

‘A few months ago, I was having a really bad day and crying while I was washing up, and my 12-year-old and eight-year-old saw and said they wanted to help.

‘I’m lucky that they are so well behaved.’

Kim Tucci is the author of the new book I’ve had 8 babies and if there’s one thing I’ve learned…, published by Plum, RRP $19.99.