Mother-of-seven, 34, dies at her home from rare genetic heart disease

Mother-of-seven, 34, dies at her home from rare genetic heart disease after falling off a chair

A seemingly healthy mother-of-seven dropped dead at her home from a rare disease she never knew she had.

Jacqueline Ann Totty was just 34 when the silent killer heart disease caused her to collapse and fall off a chair at her Wirral home.

Her fiance, Paul Tippins, started CPR while he waited for an ambulance to arrive.

Despite being rushed to Arrowe Park Hospital all attempts to resuscitate her failed and Jacqueline died on September 22, 2018, Liverpool Coroner’s Court was told.

The young mum was described as having a ‘loyal, loving partner’ in a tribute posted on a Just Giving page shortly after her death.

During an inquest into her death, pathologist, Dr Christopher Johnson, warned her family of the dangers of the rare inherited heart disease Arrhythmogenic Cardiomyopathy, that killed Miss Totty.

The genetic heart disease is known to cause sudden death, especially in younger people.

Dr Johnson also told the court toxicology results showed Miss Totty had a small amount of cocaine in her system but did not believe this to be a significant factor in her death.

He said: ‘I felt these changes [to her heart] were more extensive that just previous cocaine use. I asked for a specialist opinion to have this reviewed with particular concern about her age and something going on with her heart.’

However, he said he could not discard the cocaine entirely, telling the court: ‘Both can cause abnormalities, together it’s not a good combination.’

A tribute on a Just Giving Page to help with funeral costs said: ‘Jackie was only 34 and a loving mum of seven. She was a loyal loving partner to her fiancé Paul and was so excited to get married. 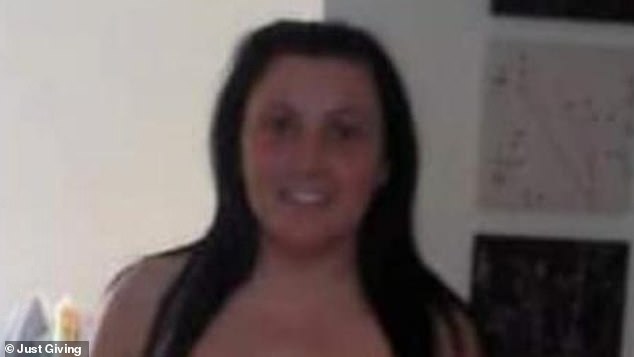 During an inquest into her death, pathologist, Dr Christopher Johnson, warned her family of the dangers of the rare inherited heart disease Arrhythmogenic Cardiomyopathy, that killed Miss Totty, pictured above

‘She had a heart of gold and would do anything for you if you asked. She’s had a tough time over the years, but she managed to pull herself back with a little help from her family and friends, back to where she needed to be in life but sadly that life has been taken away from her.’

Coroner Anita Bhardwaj said: ‘On September 22, 2018 she was admitted [to Arrowe Park Hospital] after she was seen to fall back off a chair and became unresponsive and suffered cardiac arrest.’

She added: ‘She died of the natural disease Arrhythmogenic Cardiomyopathy (an inherited disease) in conjunction with cocaine. In it’s own right it can cause sudden death, more than likely a combination of both has increased the risk of fatality.

The coroner also urged Miss Totty’s family to consider being tested for the rare disease that killed her, especially her children.