A mother-of-six has claimed that her family were held hostage by Turkish police who demanded they pay their hotel £1,600 after the collapse of Thomas Cook.

Emma Robinson, 33, spent £5,000 on an all-inclusive two week break in Antalya, in Turkey, with her six children and mother Jennifer, 52.

They were due to fly back home to Loftus, Yorkshire on Wednesday before Thomas Cook went bust on Monday.

She claims that staff at the Eftalia Splash Resort Hotel then demanded that she fork out £1,600 to cover the cost of the two days left of their holiday, locking the family out of their rooms.

Emma Robinson, second from right, with her six children and mother Jennifer, 52 at the hotel, where she claims they were held hostage by Turkish police over a £1,600 payment

Emma took a photo of the resort manager of the four-star hotel who she claimed made the money demand.

After she posted the photo online, five police officers arrived at the hotel, were they detained Emma for two hours, according to her sister.

Kayleigh, 32, said sister Emma was left petrified by the police questioning, as the officers did not speak English and left paperwork in Turkish in front of her.

While Emma was questioned, her family barricaded themselves in their rooms.

Emma told the Sun: ‘We were called into reception after the news broke about Thomas Cook going bankrupt.

‘We had two rooms at the hotel – and we were told we would have to pay £800 for each room if we wanted to stay on there. 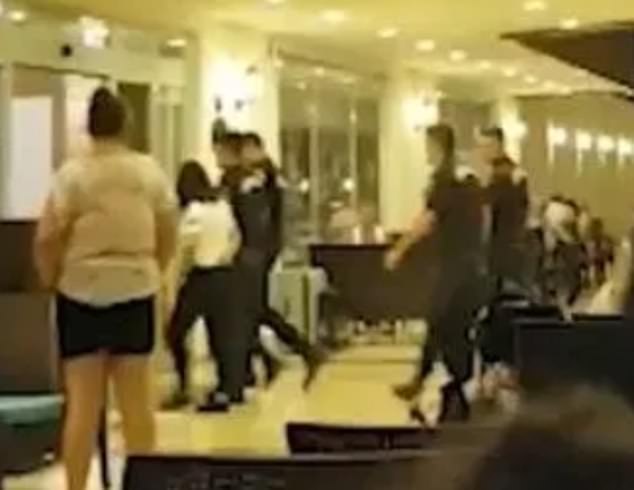 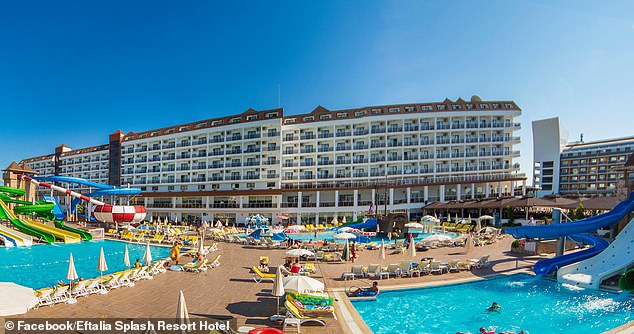 ‘The hotel manager said he’d been left out of pocket by Thomas Cook but that’s not our fault.’

She added they were left with nowhere to sleep after being locked out of their rooms and security guards ‘with guns’ were sent to the hotel.

After their ordeal, the family arrived at Birmingham Airport this morning, a day later than planned.

They were originally scheduled to return to Newcastle Airport.

A spokesman for the Eftalia Splash Resort Hotel said: ‘No one of our customers were arrested, no one was treated in bad way and no money was taken.’