Amy Bright, 41, gave birth to her son Jacob by c-section in 2003 and has been suffering from back pain ever since. Last fall a CT scan revealed that a piece of the epidural needle was buried in her spine

A mother who endured back pain for 14 years after giving birth has discovered part of an epidural needle embedded in her spine.

Amy Bright, 41, gave birth to her sixth and youngest son Jacob by cesarean section at a hospital in Jacksonville, Florida, in 2003.

Two months later she started experiencing severe back pain that would linger for more than a decade until, last year, a CT scan last fall revealed a 3cm-long chunk of needle was buried in her spine.

The needle had allegedly broken off when she was given an epidural 14 years earlier and had caused extensive nerve damage leaving her with limited use of her left leg and foot, according to People.

Bright and her attorney claim that the hospital knew it had broken off but neglected to do anything about it even though the damage could have been avoided if it was removed at the time.

Removing the needle now could leave her permanently paralyzed, but leaving it in will likely have the same consequence.

She is now poised to become the 15th person to sue the hospital since 2005 – at least three of whom won upwards of $1 million for their grievances. 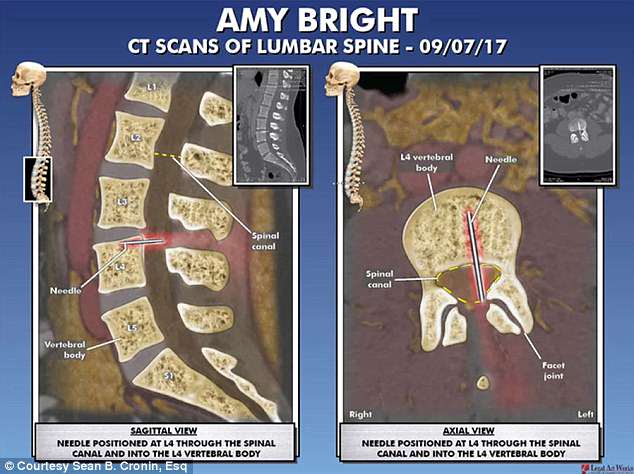 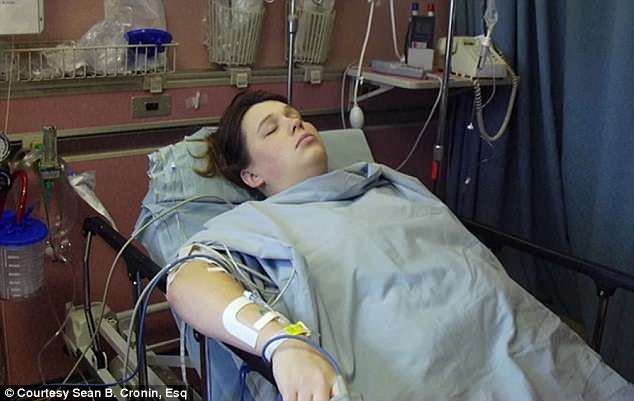 Removing the needle now could leave Bright paralyzed, but leaving it in may do the same

‘Every time I move and walk and bend and twist and sleep, that needle moves inside my spine. For 14 years, I’ve been creating scar tissue in my spine from this needle moving,’ Bright told People.

Over the years she has seen several doctors and been prescribed pain killers, muscle relaxants and other medications to cope with her pain.

‘It feels like fire, like a poker next to my tailbone. On occasion, it shoots down the left side of my leg on my calf, and then down and into my foot,’ Bright told WRAL.

Doctors initially thought the pain was sciatica, a term used to describe the symptoms of leg pain, tingling, numbness, or weakness that travel down the low back via the sciatic nerve in the back of the leg that is, ironically, treated with an epidural shot.

The CT scan was intended to diagnose the sciatica, but instead it revealed the real root of the problem.

‘I was absolutely livid and upset and scared,’ she said.

Bright and her attorney Sean Cronin claim that the hospital knew a piece of needle had broken off and been left behind nut did nothing about it.

‘This is something that was not disclosed,’ Cronin told People. ‘These needles are about 9 or 10 centimeters and they have a tip on the end that the provider is supposed to inspect to make sure they have the whole needle.

‘They knew this was in her, according to our experts, because so much of the needle was missing. And the safety tip is still in her.’ 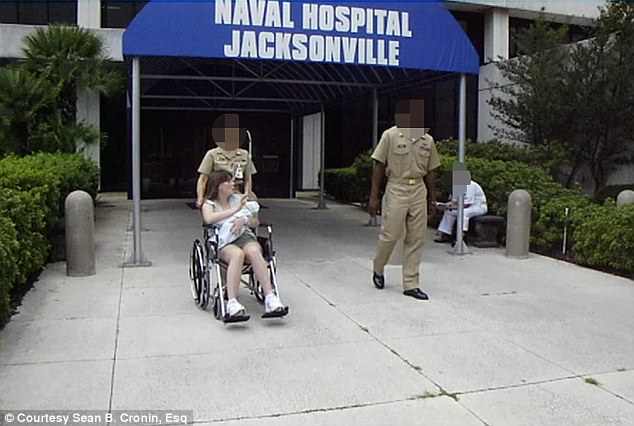 A mother is pictured leaving the hospital in Jacksonville, Florida, where Bright gave birth in 2003. A lawsuit is expected to be filed against the hospital later this year 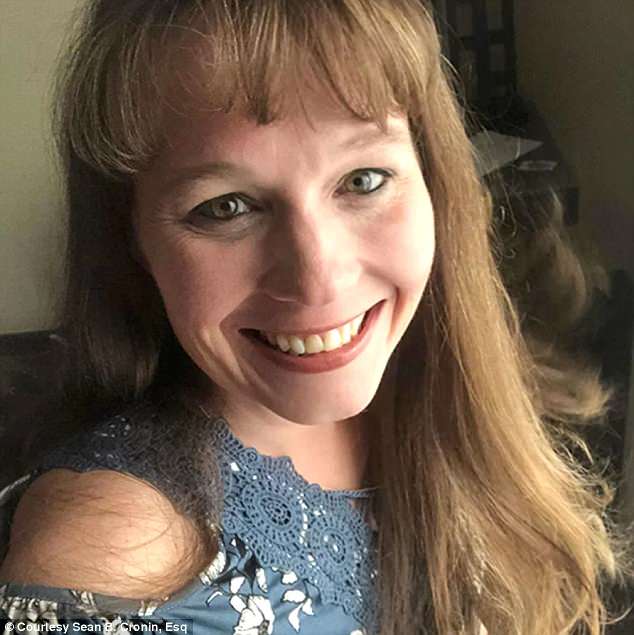 Bright said she has tried to protect her kids from the experience, especially son Jacob

Cronin claims that if the needed would have been removed immediately the pain and nerve damage could have been avoided, but taking it out now could leave Bright paralyzed.

Instead she said she will have to rely on pain medication and physical therapy to manage the damage for the rest of her life.

‘It has gotten to the point where it just burns constantly. I’m very scared of my future. [My leg] is getting weaker,’ Bright said. ‘I’m probably going to be in a wheelchair. It’s scary because I don’t know.’

‘I don’t know what my future holds. I’m very paranoid and scared,’ she said.

She added that she doesn’t talk about the experience with her children because she wants to shield them from it, particularly Jacob, now 14.

Bright and Cronin have accused the hospital of fraud and malpractice and are planning to file a lawsuit in the coming months, but it is not clear how much money they will be seeking.

At least 14 lawsuits have been filed against the hospital since 2005 and at least three of them ended in settlements totaling around $1 million each.

In 2005 a judge awarded $40 million to the parents of a two-year-old who sustained brain damage after the hospital waited too long to perform a c-section.