Top judges today ruled Britain is right to share evidence with the US about two suspected ISIS terrorists without seeking assurances that they won’t be executed.

The mother of El Shafee Elsheikh, who is a suspected member of The Beatles execution cell that murdered Western hostages in Syria, lost her case at the High Court.

Maha Elgizouli was challenging Home Secretary Sajid Javid’s decision to hand over 600 witness statements to the US without guarantees they won’t face the death penalty.

But her legal bid was rejected by two leading judges who ruled that the move by the UK government was not unlawful.

Elsheikh and Alexanda Kotey are accused of belonging to the brutal four man cell, dubbed the Beatles because of their British accents, responsible for killing high profile Western captives.

The pair were captured in Syria January last year, sparking a row over whether they should be returned to the UK for trial or face justice in another jurisdiction.

The Lord Chief Justice, Lord Burnett, sitting with Mr Justice Garnham, said: ‘There is no general, common law duty on Her Majesty’s Government to take positive steps to protect an individual’s life from the actions of a third party and that includes requiring particular undertakings before complying with the MLA request.’

During a hearing in October, Ms Elgizouli’s lawyers said Mr Javid’s decision, which was outlined in a letter to then US attorney general Jeff Sessions, was ‘unprecedented and unjustified’ and put the suspects at risk of an ‘inhuman punishment’. 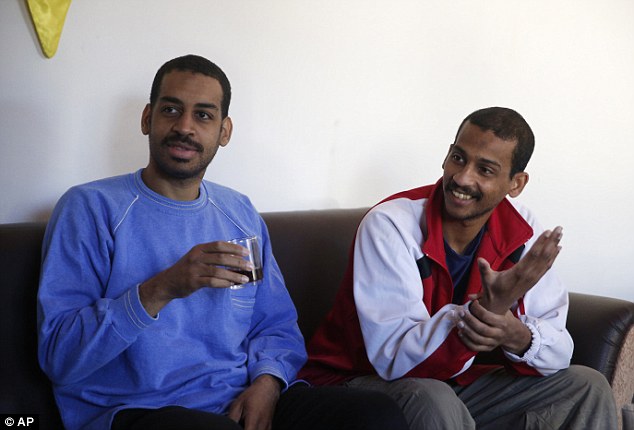 Kotey, left, and Elsheikh (right) who were allegedly among four British jihadis who made up a brutal ISIS cell dubbed ‘The Beatles,’ speak during an interview with The Associated Press at a security centre in Kobani, Syria in March last year 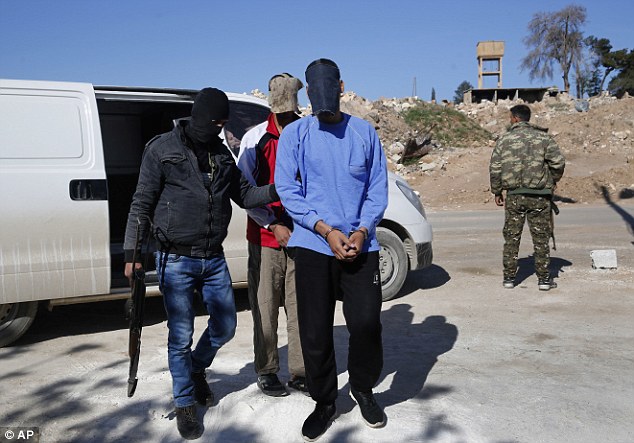 The two men, pictured in light blue top and red jacket, are currently being held by Kurdish forces in the Syria and have been stripped of their British citizenship

Kotey and Elsheikh, who were raised in the UK, are believed to be detained by Kurdish forces in Syria and have been stripped of their British citizenship.

They are said to have been members of the cell which also included Mohammed Emwazi, known as Jihadi John, who was killed in a US air strike in 2015, and Aine Davis, who has been jailed in Turkey.

Emwazi appeared in a number of videos in which hostages, including British aid workers David Haines and Alan Henning and US journalists James Foley and Steven Sotloff, were killed.

The Crown Prosecution Service decided there is ‘insufficient evidence’ to prosecute them in the UK. 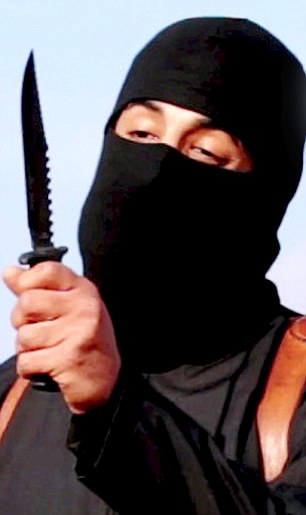 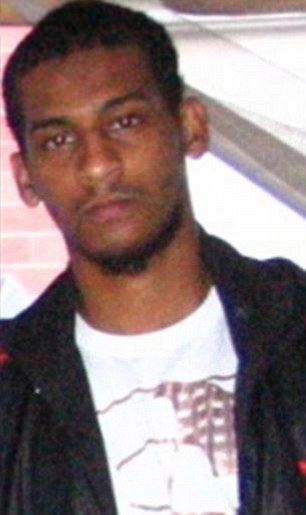 Elsheikh (right) was part of the terror cell which also included Mohammed Emwazi, known as Jihadi John (left) who was killed in a US air strike in 2015

After Ms Elgizouli launched legal action, the Home Office announced in July that it had agreed to a ‘short-term pause’ of the MLA process with the US.

Mr Javid faced intense criticism after the letter he wrote to Mr Sessions was leaked, with MPs accusing him of breaching the UK’s long-standing opposition to the death penalty.

The Government’s former reviewer of anti-terror legislation, Lord Carlile, branded the move ‘extraordinary’ and said it was a ‘dramatic change of policy’.

Prime Minister Theresa May supported Mr Javid’s original decision, which was also backed by Boris Johnson when he was foreign secretary.

But the MLA sparked widespread criticism in Westminster from across the political divide.

Gareth Peirce, of Birnberg Peirce Solicitors, which represented Ms Elgizouli, said: ‘The court’s decision is difficult for Ms Elgizouli to take on board.

‘The Government’s own evidence supported her assumptions – that the UK’s unwavering commitment remains, to oppose the use of capital punishment anywhere in the world.

‘The court’s decision rests upon the constraints it identifies – that the common law is slow to absorb international legal progression, that Mutual Legal Assistance is provided via a prerogative power, that ministers need only to state that they took relevant factors into account and that the courts should be cautious in forward-moving legal progression of the common law.’

Ms Pierce added: ‘Ms Elgizouli hopes that the opportunity will be given for the Supreme Court to consider whether it has a greater ability to explore the important factors raised in the case she has brought.

‘She recognises that they have broader (and fundamental) consequences beyond the case she felt compelled to initiate.

Ms Pierce said Ms Elgizouli ‘continues urgently to question’ whether her son could not be prosecuted in the UK.

Home Secretary Sajid Javid said: ‘I am pleased the court has upheld my decision on all grounds in this case.

‘My priority has always been to ensure we deliver justice for the victims’ families and that the individuals suspected of these sickening crimes face prosecution as quickly as possible.

‘Our longstanding opposition to the death penalty has not changed.

‘Any evidence shared with the US in this case must be for the express purpose of progressing a federal prosecution.’