The grieving mother of woman who was bashed to death with a fire hydrant by her bikie boyfriend has revealed she has yet to inform her young granddaughter her parents are no longer around.

In an emotional interview, Natalie Hinton opened up about how she is dreading the moment she has to relay the shocking news of the brutal murder to the eight-year-old girl, who is now in her care.

Ms Hinton’s daughter Tara Brown died after she was run off a Gold Coast road by her Bandidos bikie enforcer boyfriend Lionel Patea on September 8, 2015.

Ms Brown had just dropped off her then three-year-old daughter Aria at daycare when Patea chased down her hatchback with a four-wheel-drive and forced her down an embankment.

While she lay in her trapped car, Patea repeatedly bashed 24-year-old Ms Brown with a steel fire hydrant cover weighing 7.8kg he had taken from the side of the road, causing ‘non-survivable’ brain injuries.

Tara Brown (pictured) was brutally murdered by her boyfriend Lionel Patea on the Gold Coast in 2015. The couple had a daughter together, who is now aged eight and in the care of Ms Brown’s mother 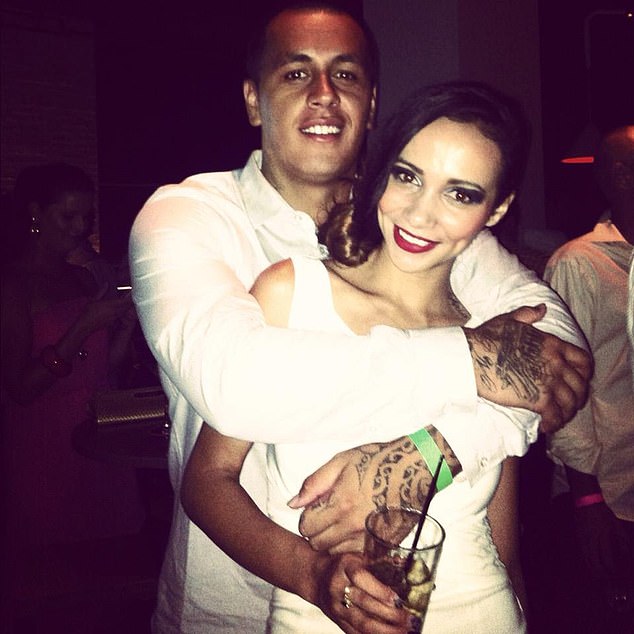 Ms Brown was driven off a Gold Coast road by Patea, a Bandidos sergeant-at-arms, before she became trapped in her car and was beaten to death with a steel fire hydrant cover 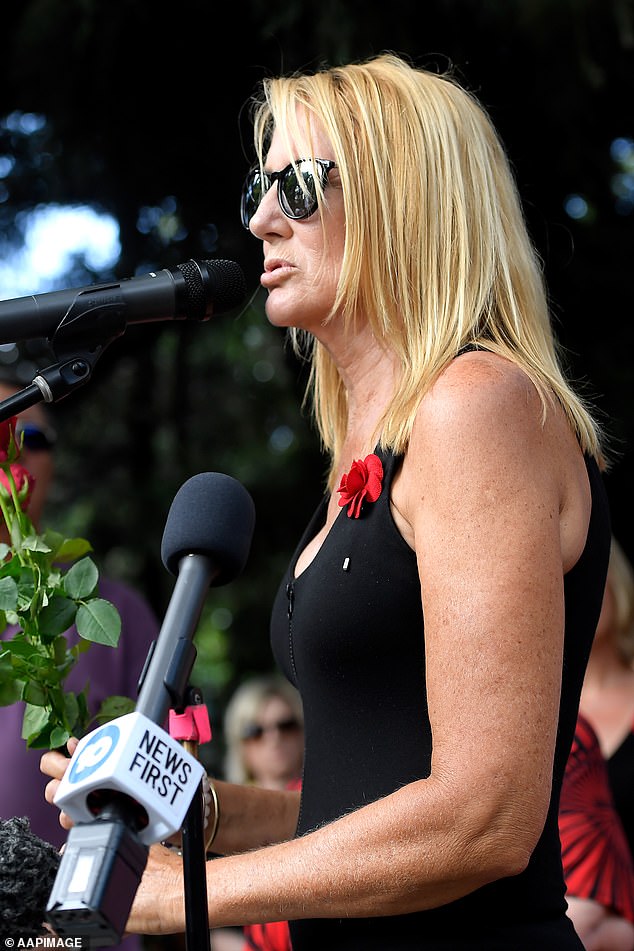 Ms Hinton said experts had advised there will come a time in the next few years where she would have to sit the little girl down and explain her father murdered her mother, the Courier-Mail reported.

‘She’s a normal little girl but you must understand that she doesn’t know the story of mum and dad yet so on the recommendation of her psychologist I’m going to have to let her know that story between the age of 10 and 11 and it’s not something I’m looking forward to,’ Ms Hinton said.

‘And then we’ll have to deal with the aftermath of that depending on how much it affects her.’

Patea pleaded guilty to Ms Brown’s murder and was sentenced to 20 years in prison in 2017.

Disturbing details about the days leading up to Ms Brown’s death were revealed in a  recent coronial inquest which found there were 27 lethality risk factors present at the time she was killed.

These included a history of violence from Patea towards Ms Brown, threats by Patea to commit suicide and attempts he had made to isolate her from her family and friends.

Patea also sought control over every aspect of her life and would not only force her to pay rent for living in his home but would move money out of her account leaving her in on one occasion with just $8.

Ms Hinton said police were meant to consider cases as urgent as soon as six risk factors were present but shockingly Ms Brown’s case ‘wasn’t considered as urgent’ by cops. 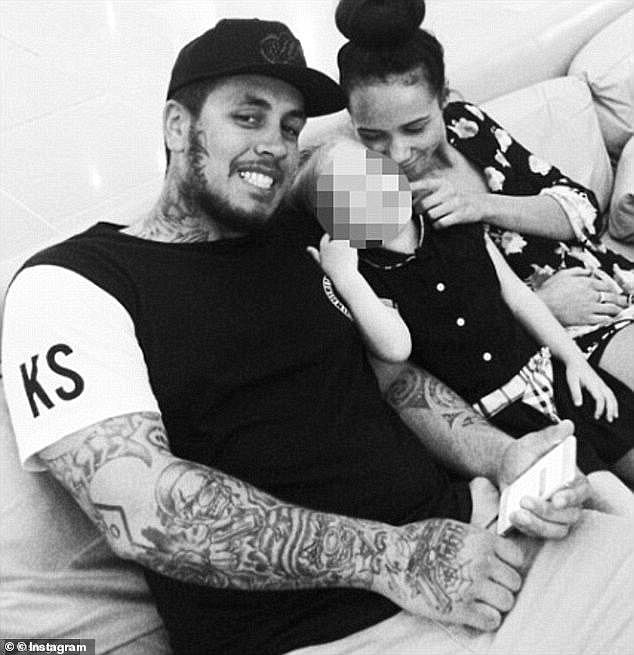 Ms Brown, who shared a young daughter with her boyfriend, had been hiding from Patea at the time of her death and had a domestic violence order against him 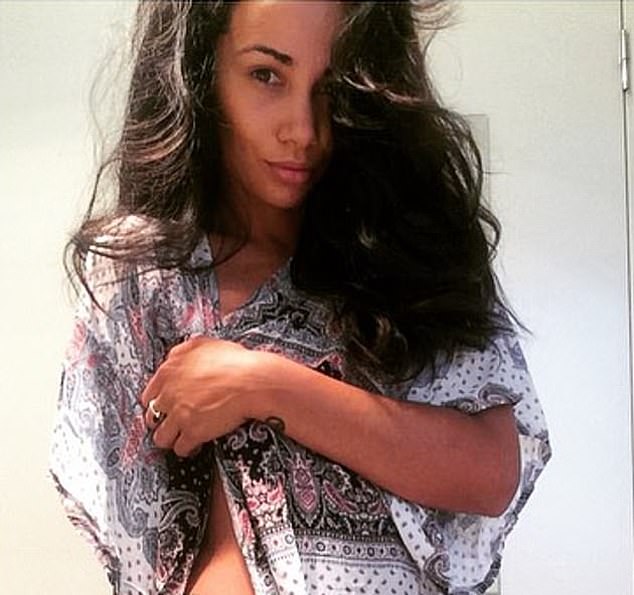 Ms Brown had dropped her daughter off at daycare when Patea ran her off a Gold Coast road, forcing her down an embankment

She said the findings released by Queensland Deputy State Coroner Jane Bentley had ‘hit the nail on the head’ about how police ‘failed miserably and that’s exactly as it was’.

But the deputy state coroner did not make any recommendations for further changes to domestic violence policing as they noted Ms Brown’s death had led to a series of reforms such as the Not Now, Not Ever report.

In the call, which left senior police officers traumatised, Ms Brown was heard repeatedly asking Patea to stop the attack that ended in her death a day later in hospital.

Ms Brown phoned emergency services after she left the Nerang childcare centre, on Queensland’s Gold Coast, where she had dropped off her daughter about 8.45am.

Just 40 seconds later, the 24-year-old mother was heard begging for Patea to go away and then a huge crashing noise rings out.

The noise was the moment Patea used his car to deliberately run Ms Brown’s off the road.

However, Ms Hinton, who has dedicated her life to raising awareness of domestic violence since her daughter’s death and established the Tara Brown Foundation, said the reforms have not gone far enough.

‘There’s still a big problem with police believing, understanding and supporting these women when they make a complaint or are escaping their relationships I’m still hearing the same story over and over that the police aren’t believing me, the police aren’t helping me, I’m giving up on the police because I’m not getting any help,’ she said.

The deputy state coroner found police had dismissed Ms Brown when she asked them for help.

Ms Bentley said Ms Brown had gone to police to make an application for a domestic violence protection order on September 3 – five days before her death.

Her pleas for help were rejected, with one officer telling an internal investigation it was ‘commonplace for women to make false allegations to further their position in Family Court matters’.

Ms Brown’s solicitor had called ahead at the Southport Police Station to request a private room for Ms Brown so she could discuss her fears over Patea.

But Ms Bentley said police failed to provide a room or to take a statement when Ms Brown arrived at the station.

Ms Brown even showed the constable at reception she had received ‘hundreds of messages in the space of hours’ from Patea. 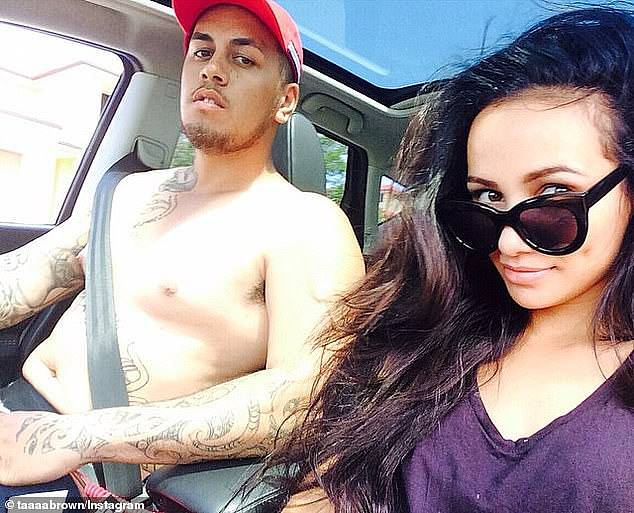 Prior to her death, Ms Brown had revealed her partner had threatened her with a handgun and smashed her windscreen

‘The constable spoke to his shift supervisor, a sergeant, and both concluded that they had no evidence to confirm that domestic and family violence had occurred,’ Ms Bentley said.

The deputy state coroner also said Ms Brown had seen a member of Patea’s family outside the station and expressed concern they might be watching her.

Ms Brown also revealed she had been pinned down on the bed and threatened with a pair of scissors by Patea.

Ms Bentley said the constable did not accurately record the incident when he was told about it.

‘Ms Brown reported that Mr Patea held scissors to her throat and threatened her, but the constable’s recollection and reporting of events differed dramatically from that of the solicitor and Ms Brown’s mother, who were also present,’ Ms Bentley said.

‘He recorded that scissors fell out of Mr Patea’s pocket after he pushed her onto the bed and that it was not a violent push.

‘Ms Brown was reluctant to sign a statement about the events.’ 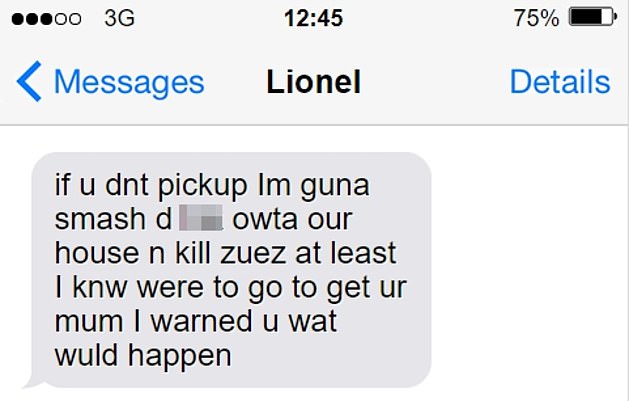 Shocking text messages sent from Patea to Ms Brown were aired in recent findings into her death by Queensland’s Deputy State Coroner (pictured, mock-up of one of the texts sent by Patea) 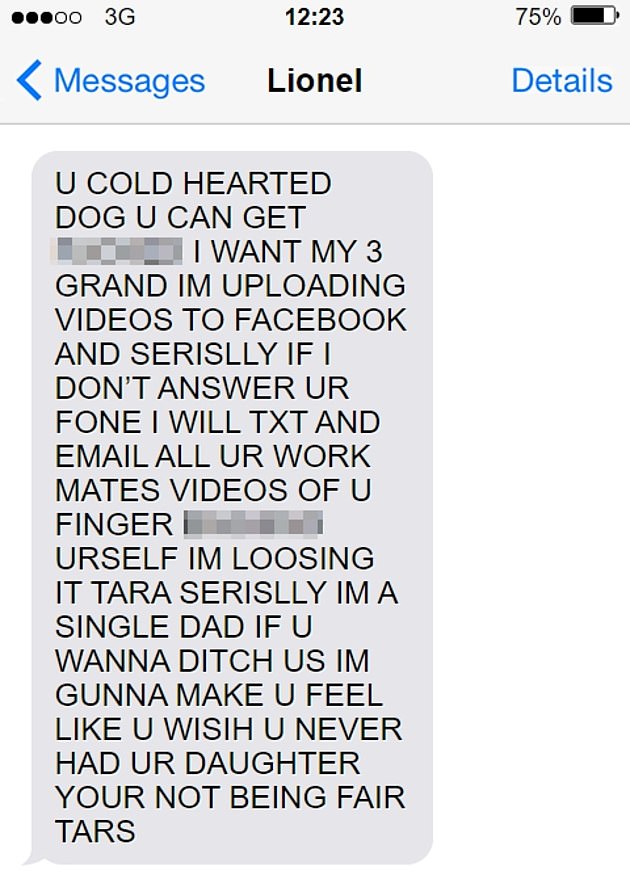 In the days leading up to her death Ms Brown said she was receiving hundreds of threatening texts and calls a day. A text is pictured

During the time of Ms Brown’s death, she had been hiding from Patea at a safe house and friends’ homes.

The coronial report found that Patea was repeatedly violent with Ms Brown and allegedly asked Bandidos members to bash one of her friends whom he thought she was sleeping with.

Ms Brown had separated from Patea in June 2012 and was living with her mother.

One of the texts read: ‘if u dnt pickup Im guna smash d f**k owta our house n kill zuez at least I know were to go to get ur mum I warned u wat wuld happen’ (sic).’

In the days leading up to her death Ms Brown said she was receiving hundreds of threatening texts and calls a day.

‘U COLD HEARTED DOG U CAN GET F****D I WANT MY 3 GRAND IM UPLOADING VIDEOS TO FACEBOOK AND SERISLLY IF I DON’T ANSWER UR FONE I WILL TXT AND EMAIL ALL UR WORK MATES VIDEOS OF U FINGER ******* URSELF IM LOOSING IT TARA SERISLLY IM A SINGLE DAD IF U WANNA DITCH US IM GUNNA MAKE U FEEL LIKE U WISIH U NEVER HAD UR DAUGHTER YOUR NOT BEING FAIR TARS (sic)’ one of the texts said.

Patea was known to be extremely jealous and would constantly call Ms Brown when he was not with her, the coronial report found.

He paid for her to stay in separate hotels from her team when she would go away on touch football competitions because she had male teammates. 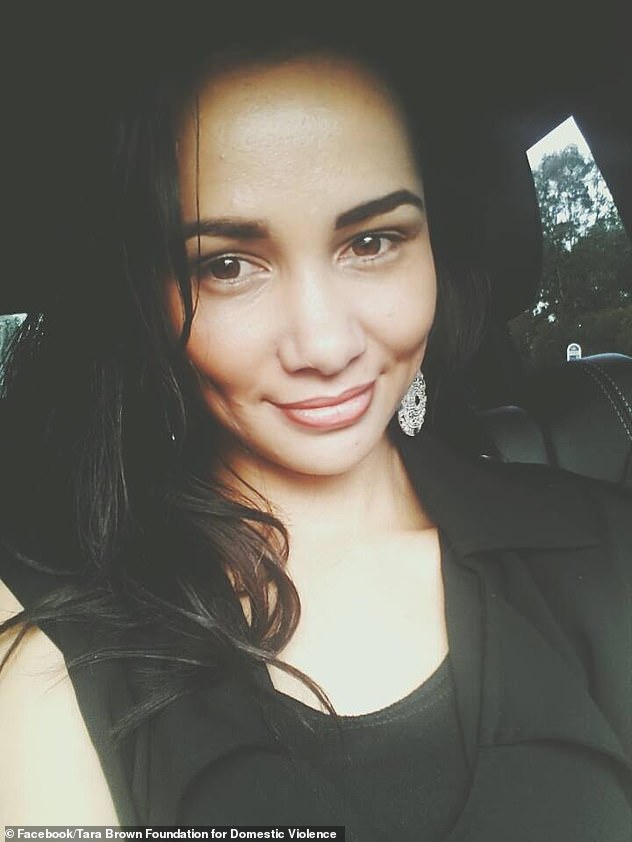 Queensland Deputy State Coroner Jane Bentley released findings into the death of Tara Brown, 24, more than five years after she was killed on September 8, 2015

One friend claimed Patea often demanded to know what she was wearing and would label her a ‘s**t’ and accuse her of cheating on him, the findings reported.

While pregnant, Ms Brown was allegedly strangled and pushed down the stairs by Patea who then threatened to slit their dog’s throat and bash her brother.

Ms Brown first reported the violence to police after an incident occurred when she was 33 weeks pregnant in June 2012.

She had stopped at a service station to get a chocolate bar but Patea became so angry he ripped off her dress, spat at her, threw a bucket at her and called her a ‘putrid dog mongrel s**t’.

Ms Brown, who was too fearful to make a formal complaint, also revealed her partner had threatened her with a handgun and smashed her windscreen.

Police then applied for a Domestic Violence Protection Order (DVPO).

In May 2012, when Ms Brown was giving birth, Patea threatened to slit the throat of her mother because he thought she had ‘ignored’ him when he arrived at the hospital.

During the time of Ms Brown’s death, she had been hiding from Patea at a safe house and friends’ homes.