A mother-of-three has revealed why she adopted a ‘carnivore’ diet, after following a vegan food routine for six years – which she insists  gave her wrinkles, tooth decay and a low libido, while her non-vegan twin sister seemed to defy age.

Speech pathologist, writer and keto coach Mariela Stewart, 39, from Texas has transformed her health and physique after veganism left her feeling bloated and older and she turned to the controversial keto diet.

Before being vegan, Mariela consumed a low-carb diet for over a decade but eventually became plant-based to improve her digestive problems after seeing a documentary about how veganism could help digestive issues.

Not working: Mariela Stewart, 39, from Texas adopted veganism to help with bloating 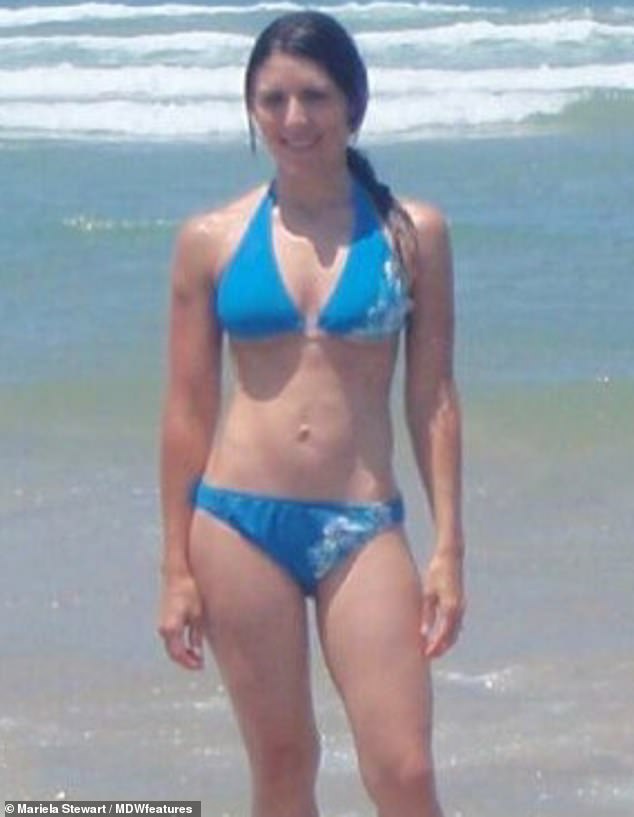 Unhealthy: While on the vegan diet for six years, Mariela found it actually impacting her body and making her feel skinny fat instead of healthy

‘I did every vegan variation out there: raw vegan, high carb low fat diet, fruitarian and everything in between. I focused on a lot of fruit, vegetables, greens, nuts, sprouts and I lost a lot of muscle and got soft and flabby.

Unfortunate:  Mariela, pictured while on the vegan diet, found her diet impacted her muscle mass

‘Eventually I added some tofu sporadically, quinoa, rice and beans but my digestion had a hard time with the vegan diet.’

Mariela was vegan for six years, including raw vegan and fruitarian, but this resulted in her losing a lot of muscle and having no definition.

‘My hair was frizzy, and I began losing a lot of it, including my eyelashes, so I had to get eyelash extensions.

‘My nails became brittle and my skin was aging so much due to a high sugar diet with low fats.’

Mariela has a twin sister, Mariana, 39,  who wasn’t vegan, and she began noticing that her twin seemed to be defying age, whereas Mariela’s skin became wrinkly and worn.

‘I compared how quickly I was aging compared to my twin sister who wasn’t vegan and I had more wrinkles and looked so much older than her,’ she said.

‘My weight fluctuated, I had mood swings and I had to severely restrict calorie intake to see very minimal change.

‘I didn’t like how I was feeling or looked, so I had to do something about it.’

Mariela decided she’d had enough, and it was time to listen to her body. 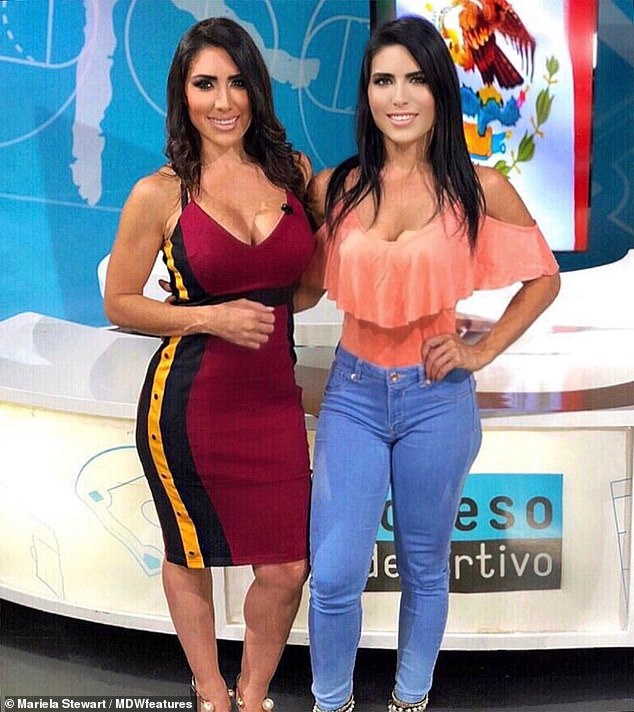 Identical: Her twin sister, Mariana (left), was a huge influence because Mariela felt she didn’t look as good as her while on her vegan diet 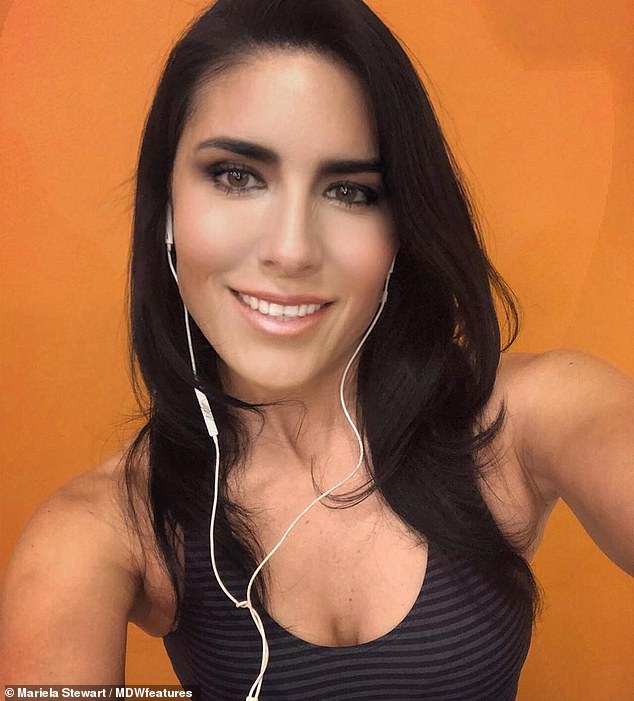 Seeing a difference: ‘I didn’t like how I was feeling or looked, so I had to do something about it,’ Mariela said

Strong: She officially started the keto diet in June 2018 and started to see results with her muscle mass

In June 2018, after doing some research into the various options, Mariela started the ketogenic diet which emphasizes foods which are low in carbohydrates and high in fat.

These foods include meat, eggs, fish, avocados and nuts. 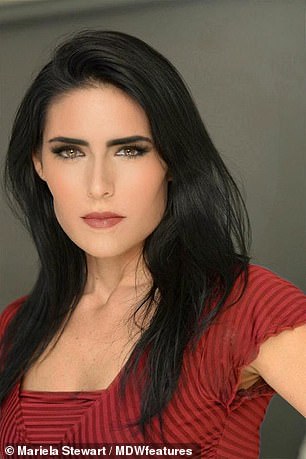 Stunning: Mariela also found she had less cravings, improved sleep and improved digestion while on the keto diet

‘I ended my vegan diet in June and went back to a low carbohydrate life, but this time adopting a Ketogenic diet after researching the benefits. After relearning everything I knew and opening my mind to new research, I realized why I lacked so many nutrients with a vegan diet and why my body was breaking down.

‘I am being intuitive and listening to my body, but everyone’s body is different.’

Mariela has noticed many benefits since starting her keto diet, including losing weight and gaining muscle despite exercising less, no cravings, improved sleep, mental clarity, improved digestion and stronger hair.

‘I always choose whole foods and reduce all sugar, and I’m still listening to my body as I’m trying to heal my gut and digestion. It’s still a work in progress,’ Mariela said.

‘I’m more intuitive with how I feel after I eat a certain food and I see how my body responds.

‘I don’t get hungry until midday, so I have a meal like keto waffles with shredded coconut butter, protein bread with tuna and mayo, or avocado stuffed with tuna and salad. I snack on nuts, pork and rinds.

‘In the evening I usually have a protein, like salmon, chicken, steak, ribs or pork, with vegetables sautéed in coconut oil and a salad. 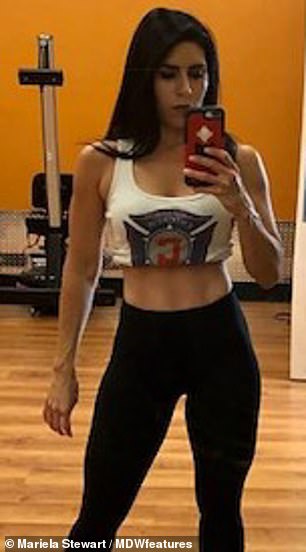 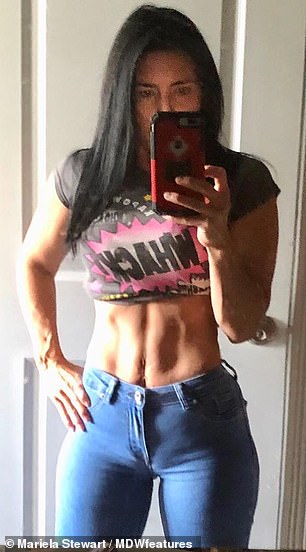 Fit: Her diet consists of whole foods and eliminating any processed sugars 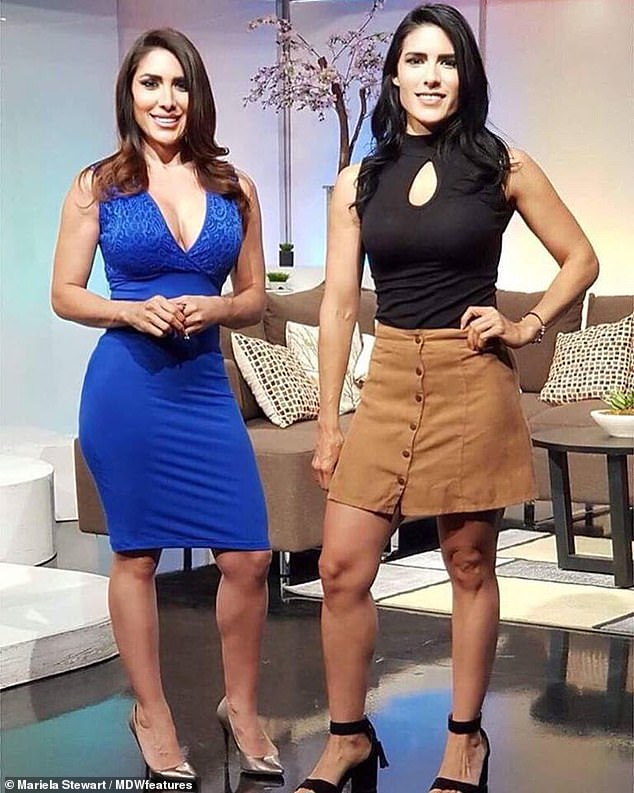 Beautiful: Mariela (right) noticed while on the vegan diet that she seemed to age faster than her twin, Mariana (left)

Healthy: ‘I urge people to educate themselves and relearn everything they think they know about nutrition and health,’ she said. ‘Veganism isn’t a sustainable way of eating’ 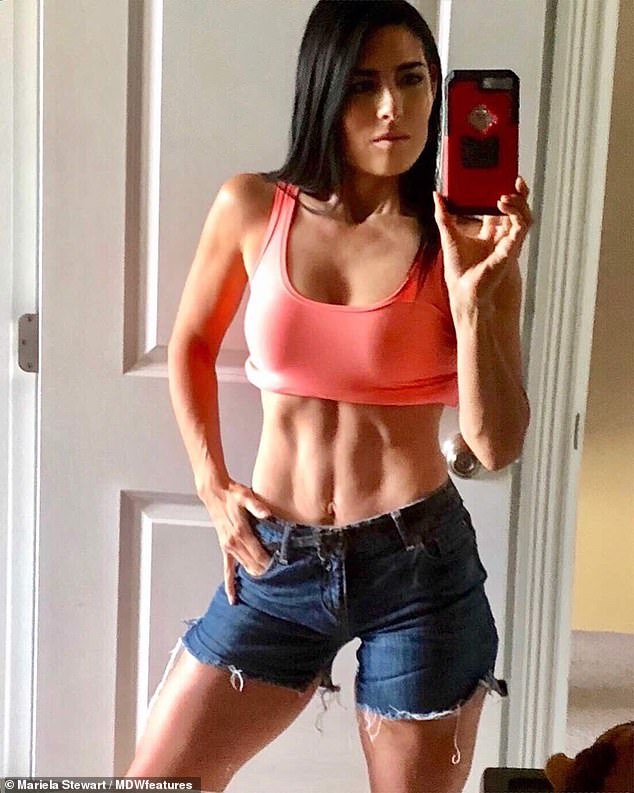 Happy: She is using her platform to educate others about what foods they put in their body and what people should consider when enforcing a diet

Mariela wants to educate others on the importance of understanding nutrition after realizing that veganism wasn’t a sustainable diet for her to follow.

‘I’ve lost fat and gained muscle, I sleep far better, my digestion is better, I feel satisfied and I have mental clarity. I’ve got more energy which is stable throughout the day, without caffeine. My skin also appears clearer and plumper, and I just feel happier in myself.

‘I actually work out less, but I do resistance training three to four times a week now. I’ve remained a size XS but I’ve lowered my body fat and I’m leaner and stronger now. My body re-composition is completely different now.

‘I urge people to educate themselves and relearn everything they think they know about nutrition and health. Veganism isn’t a sustainable way of eating.

‘I’m not the only one who feels this way. I know so many vegans who have also stopped being vegan for the same reasons I had. Many people feel better at first but over time the vegan diet starts causing all sorts of issues.

‘Children should never eat a vegan diet as so many articles express the dangers of veganism in children.

‘You should understand how your body works and what it needs to survive and thrive. It was very hard to detach from the vegan label, but what is a label worth if it destroys the very thing you’re trying to attain?

‘The information you need is out there, you just need to be unbiased and realize you may be wrong. Give your body time to heal and allow it to trust you again and you’ll reap the benefits of a keto diet. It’s not always about the scale, it’s about changing how you feel.’