Shaida Nathan, 32, a mother-of-three, was shot dead in a shack near Cape Town on Sunday while delivering her fourth child

A pregnant woman has been shot dead while she was giving birth in South Africa.

Shaida Nathan, 32, a mother-of-three, was in the midst of delivering her fourth child in a back-garden shack on the outskirts of Cape Town around 6am Sunday when the attack happened.

Medics were called but were unable to save the mother or her unborn child.

Police say one of the two men who were with Shaida at the time, believed to be her two older sons, was the intended target of the attack.

Both of the men were also wounded and taken to hospital. Their current condition is unclear.

Officers say it is also unclear if the shooting was gang related, but it happened in a notorious high-crime area.

Relatives say they were unable to visit the hut where Shaida died because of multiple other shootings in the area through Sunday and Monday.

One 68-year-old resident, who did not want to be named, told IOL: ‘Shaida was a mother of three children.

‘One child is in foster care, the other two were with her, but I don’t know where they are now.’ 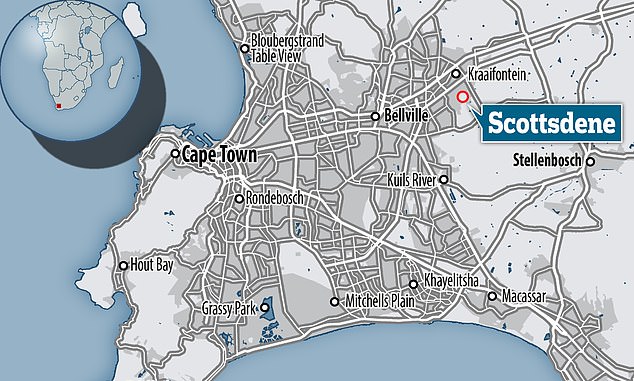 On 13th June, President Cyril Ramaphosa condemned the ‘surge in murders of women and children’ in South Africa.

Ramaphosa said: ‘It is a dark and shameful week for us as a nation. Criminals have descended to even greater depths of cruelty and callousness.

‘We note with disgust that at a time when the country is facing the gravest of threats from the pandemic, violent men are taking advantage of the eased restrictions on movement to attack women and children.

‘We need to understand what factors are fuelling this terrible trend and, as society as a whole, address them urgently.’

On 12th June, the body of a young woman was found under a tree in Dobsonville in Soweto.

Her murder followed the death of eight-month-pregnant Tshegofatso Pule, who was reportedly stabbed and found hanged from a tree in a field in Roodepoort days before.

Several days later, Naledi Phangindawo, 25, was hacked to death by a man with an axe and a knife, according to reports.

Last week, an unnamed 26-year-woman was allegedly stabbed to death by her ex-boyfriend in her home.