A size 22 woman who feared she would lose a limb after being diagnosed with Type 2 diabetes has reversed her condition in just 13 months.

Toni Weeks, 51, from Leighton Buzzard in Bedfordshire, who tipped the scales at 20st 7lbs at her heaviest, lost nearly 10 stone on a ‘smart’ weight loss plan that focuses on ‘rewiring’ eating habits – and also allows treats and alcohol.

The mother-of-three, who now weighs 10st 11lb, saw her blood pressure and cholesterol drastically reduce and halved her body weight while ‘still enjoying a cheeky glass of red’ and takeaways on the Second Nature programme, which is backed by the NHS.

‘I’m now wearing a size 12 and am no longer diabetic,’ said Toni, speaking to FEMAIL. ‘I was taking three tablets a day, now I’m down to one. My sleep apnoea has improved considerably. It’s incredible.’

Toni Weeks, 51, from Leighton Buzzard in Bedfordshire, lost nearly 10 stone on a ‘smart’ weight loss plan that focuses on ‘rewiring’ eating habits – and also allows treats and alcohol. Pictured, before her diet at size 22

Weighing more than 20st, Toni, who confesses she used to eat ‘mountains of takeaways’, panicked when she was diagnosed with Type 2 diabetes in January 2018. Pictured, in December 2018 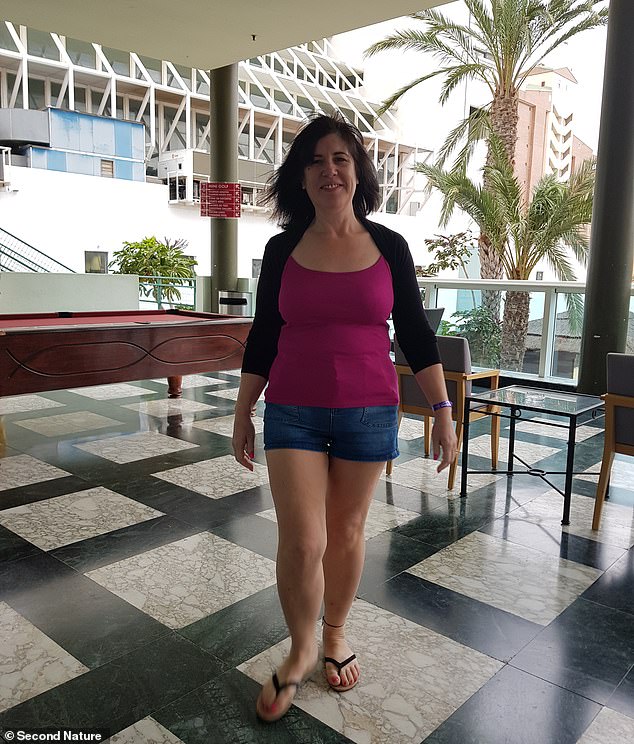 The mother-of-three who feared she would lose a limb after being diagnosed with Type 2 diabetes has reversed her condition in just 13 months. Pictured now, weighing 10st 11lbs

In January 2018, Toni, who weighed more than 20st and used to eat ‘mountains of takeaways’, was diagnosed with Type 2 diabetes and immediately panicked.

Having tried ‘weigh-in’ weight-loss plans that failed to work long-term, she embarked on her own diet, but only managed to lose two stone by August 2018 – admitting it was a ‘daily struggle’.

Toni, a Technical Account Manager, admits she had endured a battle with weight her entire life – spiralling from a size 16 in her mid twenties to a size 22 in 2018.

It was then she was hit with diabetes, which effects more than five million people in Britain and costs the NHS £10bn a year to treat. 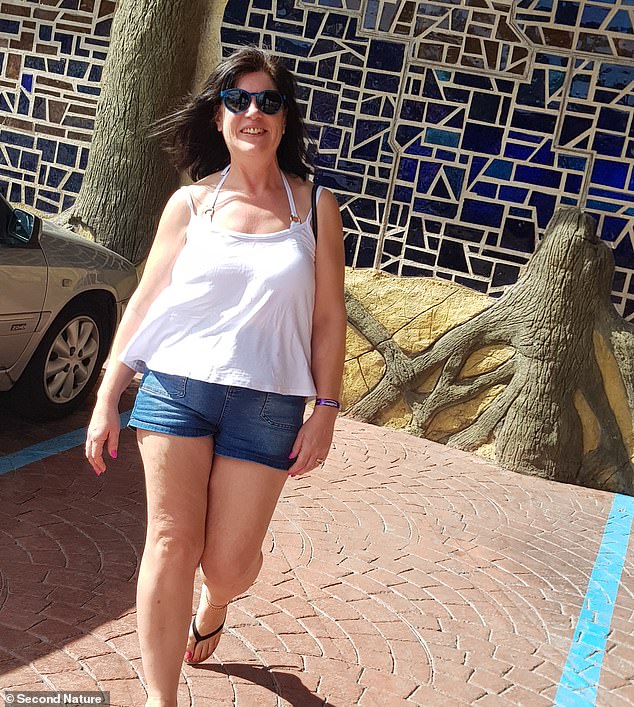 The super slimmer told how people no longer recognise her following her weight loss. Pictured, after losing ten stone

She would eat a fast-food snack for breakfast, scoff a Subway for lunch, then dine on greasy food including the likes of pizza, chips and burgers for dinner – and would often eat more than her husband.

‘My portion sizes were big,’ explained Toni. ‘I could eat a food mountain, masses of takeaways, I’m a general foodie.’

‘I would snack in between meals and would eat anything I could see. It didn’t even cross my mind that I wasn’t eating properly.’

Porridge topped with fruit and seeds

But when she received her shock diagnosis, Toni knew she had to change her eating habits.

After finding Second Nature in August, which now has 30,000 users and is also being trialled by the NHS, Toni says food is no longer her ‘crutch.’ 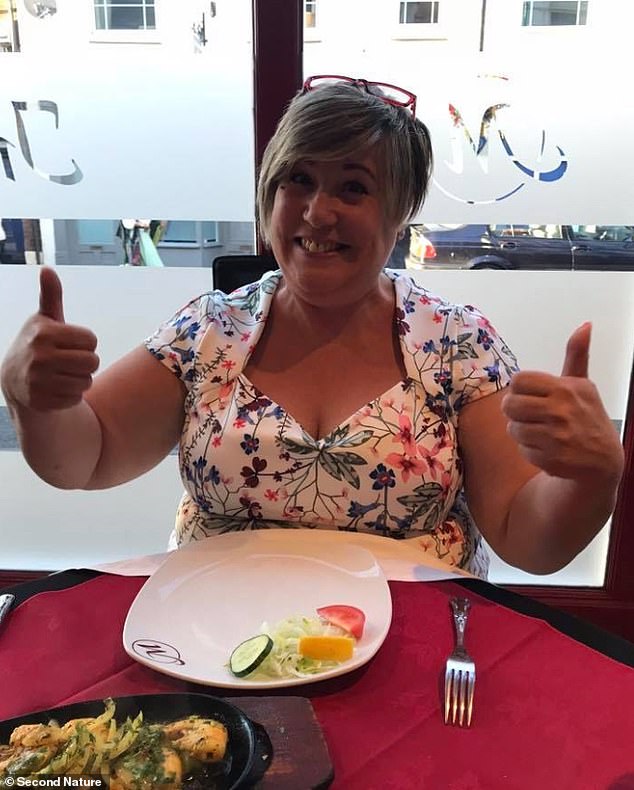 Toni would eat a fast-food snack for breakfast, scoff a Subway for lunch, then dine on greasy food. Pictured, at a restaurant before her weight loss 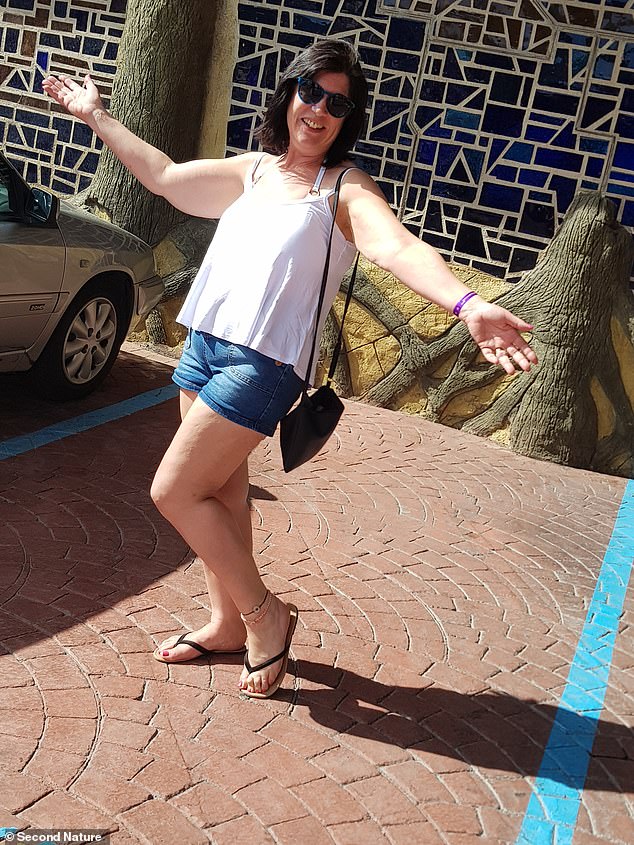 Having tried ‘weigh-in’ weight loss plans that failed to work long-term, Toni tried out her own diet but only managed to lose two stone by August 2018,. Pictured, now

‘Amazingly, during this time frame, I have been on holiday, weekends away, meals out, out for drinks with the girls, you know, carried on living,’ she said.

‘When dieting, everyone “falls off the wagon” and suffers guilt then there is the whole self-loathing and sabotage cycle.

‘With Second Nature, there is no wagon. Everyone is allowed a treat. It’s when those treats become the norm that we’re in trouble.’

No food is off limits in the plan, and Toni still enjoys a monthly takeaway and a ‘cheeky red’.

Type-2 diabetes is a very complicated disease with multiple theories as to how it develops. Arguably, it could be defined as a disease of ‘energy toxicity’ within the cells, whereby the body can’t regulate the energy we get from food effectively.

It’s a condition that develops over time; living a lifestyle that includes a diet high in processed foods, little activity, high levels of stress, and poor sleep can all contribute.

Our liver and pancreas play an essential role in regulating our body’s weight and health. In individuals with type-2 diabetes you will find high levels of fat stored within these vital organs. This excess fat storage has a negative impact on their ability to function properly, and over time, you will see an increase in blood sugar – the key marker for type-2 diabetes.

As we’ve learnt from Professor Roy Taylor’s work in the DiRECT study, it’s possible for many people to put their type-2 diabetes into remission. For overweight individuals, it seems that if losing over 15kg in body weight increases the chances of achieving remission. But weight loss on its own only tells part of the story.

What the DiRECT study also reported was a huge reduction in pancreatic and liver fat in participants who achieved remission. This indicates that the fat stored within these organs plays a key role in the development of the disease.

What Toni has achieved is remarkable, with whole body weight loss reaching close to 7 stone, and it’s very likely that her levels of liver and pancreatic fat would’ve also decreased significantly with this weight loss. This allows the organs to function more efficiently and regulate the energy we get from food.

As we mentioned before, a high intake of ultra-processed foods (e.g. cakes or crisps), coupled with low activity, poor sleep, and stress, all contribute to the condition.

At Second Nature, we provide individuals with a platform to improve all of these aspects at their own pace. We advise limiting ultra-processed foods and teach members how to cook using whole foods and make healthy, balanced meals. We provide strategies to improve sleep, reduce stress, and fit more exercise into your day.

Our programme approaches type-2 diabetes from all angles, and with the support of a registered dietitian or nutritionist in your pocket, you’re only a message away from receiving daily expert advice to support you in achieving your goals.

‘It’s an absolute treat when we have takeaway once a month,’ she explained. ‘When we dine out, we no longer have starters, puddings etc, there is no need. The main course is already too big although I can still manage a cheeky red!’

‘To this day, I can’t believe how much food I used to be able to put away.’

Toni, who also used to suffer from sleep apnoea, says she is thrilled with her progress.

‘I have found the Second Nature logic inspirational, the 360-degree approach is a real game changer, covering eating, exercise and self worth, all online without having to go out to meetings which I never looked forward to,’ explained Toni.

‘People who haven’t seen me for a little while do not recognise me at first and ask where the rest of me has gone.’

‘I explain about Second Nature and describe to them that it’s not a diet but a re-education.’ 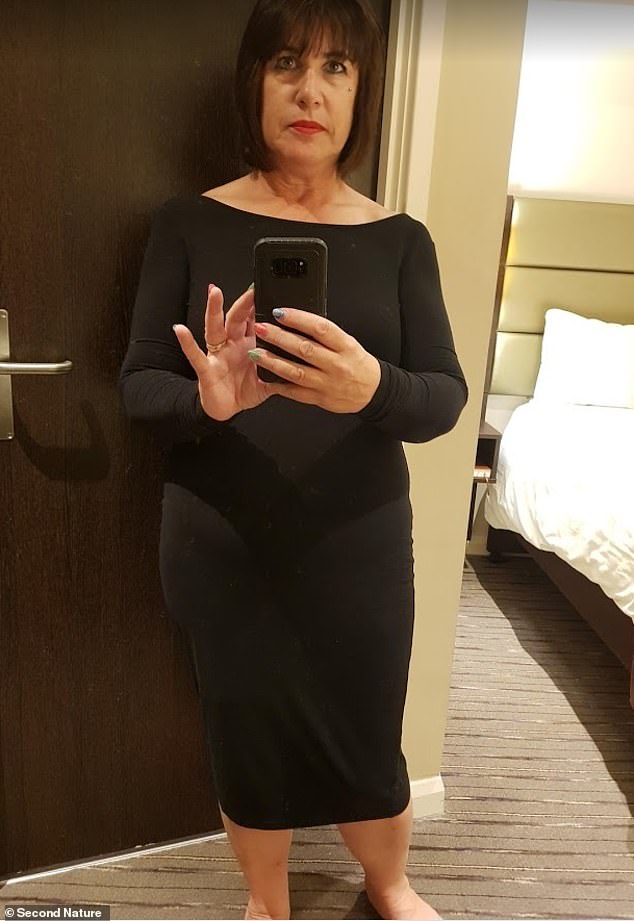 After finding Second Nature in August, fast forward to today, and food is no longer Toni’s ‘crutch’ after her life-changing epiphany and newly improved lifestyle. 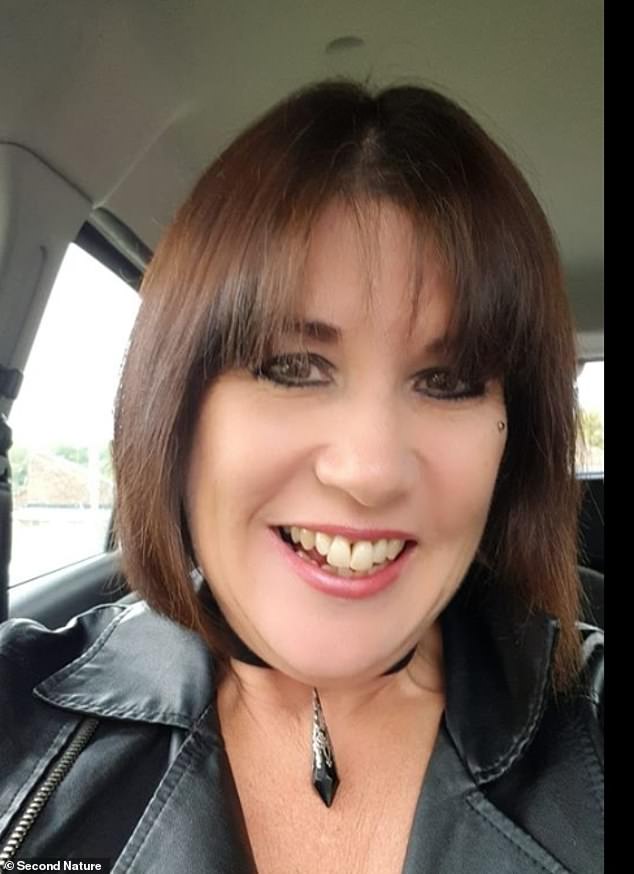 Toni says that Second Nature is not a diet but is rather a ‘re-education.’ Pictured, after her weight loss