A mother-of-three who suffers from a rare digestive disorder has said Cadbury Creme Eggs saved her live, as they were the only thing she could eat for two years.

Stella Brown suffers from a condition called achalasia, which leaves her in constant pain, unable to swallow properly, and causes her to be sick up to 20 times a day.

Despite having surgery which has allowed the 51-year-old to widen her diet, she claims that for two years she was unable to eat anything but the sweet Easter treats.

Stella from Leicester said: ‘To be honest, laugh or not – Cadbury’s Creme Eggs saved my life. They were the only food I could eat – odd I know but it is true.

‘I had one a day and for some reason I could eat it and it just stayed down.

‘Before I started eating them I would faint a lot because I wasn’t getting the energy I needed from food and would blackout.

‘They saved my life. I carried one around with me wherever I went for two years.’

When the illness first started Stella said she ‘just woke up one day and was unable to swallow’. 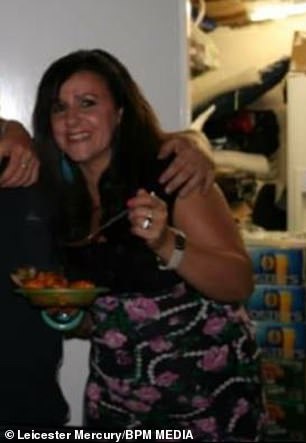 ‘It got worse over the next two weeks and eventually I went to the hospital and they thought it was just a reflux and gave me some Gaviscon.’

After a further three weeks Stella said she was finding it nearly impossible to keep water down, and was struggling to swallow anything at all.

‘Everything started coming up, and I started to panic. There’s not really any medication to ease the pain and I lost weight so much that I’ve literally gone down to size 4 clothes.

‘I was starting to get really depressed because of the weight that I had lost.

‘I have had two operations to dilate my oesophagus just so I can swallow – which I struggle with every day.

‘My doctor told me that I had it about four years ago, and up until then I had never even heard of it.’

Around 6,000 Britons have achalasia, according to estimates. The exact figure in the US is unclear.

The debilitating condition causes the lower oesophageal sphincter – a ring-shaped group of muscles where the gullet meets the stomach – to become so tight that food cannot enter the stomach.

Normally, these muscles relax when people swallow to allow the food to pass into the stomach.

Patients are often unable to hold down food or water, and the condition can lead to malnutrition, dehydration and weight loss, which in turn can lead to general poor health.

And as undigested food can end up being held inside the gullet, it may make its way into the windpipe via the throat and cause chest infections or pneumonia.

The cause of achalasia is not clear to medical professionals. But the source of the problem is believed to be the nerve cells controlling the muscle contractions of the sphincter.

Some patients are offered injections of muscle-paralysing drug Botox through the chest and into the gullet to relax the muscles.

However, relief from symptoms is only temporary, with a majority of patients relapsing after three months.

At this point Stella claims that doctors told her she only had a year to live if her condition didn’t improve.

According to the NHS guidelines, there is no cure, but there are certain treatments available for sufferers.

Treatments include medicine, surgery to stretch the oesophagus muscle, and botox injections into the ring of muscle to help it to relax.

Stella has benefited from two surgeries.

This surgery is called balloon dilation, where a balloon is inflated inside the oesophagus to help stretch the muscle so that it allows people to swallow more easily.

Since having the operation Stella can eat a bigger variety of foods, however she is still sick every day.

Stella said: ‘It’s difficult, if I got to a restaurant, for example, I have to sit as close to the toilets as possible, just in case.’

And it’s not just her social life that has been affected; she has also been forced to call time on a career in sales.

Stella said: ‘I want to go back to work, but because of my sickness it affects my ability to work.

‘I have volunteered at the council working in kitchens cooking for elderly and also on Goldhill Park a year ago, helping out in school holidays.

‘But after my latest results in February I will see what lies ahead and try and get back into work when I’m fully fit and healthy.’