Mother-of-two, 31, wearing low-cut top and no bra is kicked off easyJet flight

Mother-of-two, 31, wearing low-cut top and no bra is kicked off easyJet flight because ‘her outfit is too revealing’

A mother-of-two claims she was kicked off an easyJet flight because she wore a low-cut see-through top with no bra, opting instead for nipple covers.

Horrified Harriet Osborne, 31, said she was asked to leave the flight from Malaga to Stansted by crew who told her that her clothing choice was not appropriate for a plane with children on board.

The make-up artist slept on the floor at the airport with a friend before paying £149 to fly back home the next day.

EasyJet said in a statement that she was removed due to disruptive behaviour.

A mother-of-two claims she was removed from an easyJet flight from Malaga to Stansted because she wore a low-cut see-through top with no bra, which crew told her was inappropriate for children (Stock image)

The embarrassed mother told The Sun: ‘This air hostess confronted me in front of the whole plane and said I wasn’t allowed on in that top.

‘I was escorted away from the aircraft. It was so sexist. I just burst out crying.’

After the hostess’s initial reaction Harriet, from Southwold, Suffolk, put a jumper on before trying to board the plane again.

EasyJet said in a statement that she was removed from the flight on Sunday last week due to her ‘behaving disruptively’.

‘We can confirm that  a passenger travelling from Malaga to Stansted on June 23 was unable to travel due to behaving disruptively. 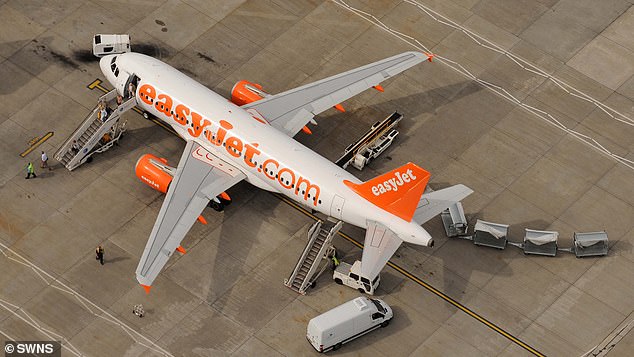 However, easyJet said that she was removed from the plane for ‘behaving disruptively’ towards a member of staff (Stock image)

‘Following concerns about her clothing crew politely requested that the customer wear an additional top for the flight which the customer agreed to.

‘However she then proceeded to act disruptively towards a member of our crew.

‘Our cabin and ground crew are trained to assess all situations and to act quickly and appropriately.

‘We do not tolerate abusive or threatening behaviour towards our staff.’

Passengers are occasionally removed from flights when they become overbooked.

In January this year a woman travelling to Geneva to celebrate her 50th birthday was removed from an easyJet flight because it was overbooked.

TV producer Charlotte Barton, who left home at 2am for the flight from Bristol, was led away from her seat for a ‘chat’ before being taken off the aircraft which had 181 passengers on board.

The airline said in a statement that due to a problem with its 186 seater aeroplane, they had to use a 180 seater.

‘We are sorry to hear of Ms Barton’s experience’, they said in a statement, ‘and would like to sincerely apologise for the inconvenience caused.’

Ms Barton has since been offered an alternative flight, full refund and compensation.