Mother-of-two, 38, with a ‘bubble-wrap face’ is covered in thousands of agonising tumours

A mother-of-two has been left with a ‘bubble-wrap’ face after the birth of her second child triggered the growth of thousands of tumours.

Charmaine Sahadeo, 38, who suffers from an extreme case of neurofibromatosis, is covered in agonising bumps, with three giant growths swamping her right leg making it nearly impossible to stand or walk.

Ms Sahadeo, from Chaguanas, Trinidad, believes her appearance is responsible for the breakdown of her 18-year marriage, as well as her financial difficulties due to employers being horrified by her disorder.

She also has to endure cruel comments and stares from strangers, with children running away from her and some people even suggesting she commit suicide.

Ms Sahadeo, who is mother to Caleb, 19 and Osiris, 15, said: ‘I have one of the most serious cases of neurofibromatosis in the world.’

Despite the seriousness of her condition, Ms Sahadeo manages to remain positive, saying: ‘I see myself as a beautiful person and I try not to let people affect me.’

Ms Sahadeo, who has endured two surgeries to help ease her disorder, believes she has run out of treatment options in Trinidad and is speaking out to seek help from medical experts abroad. 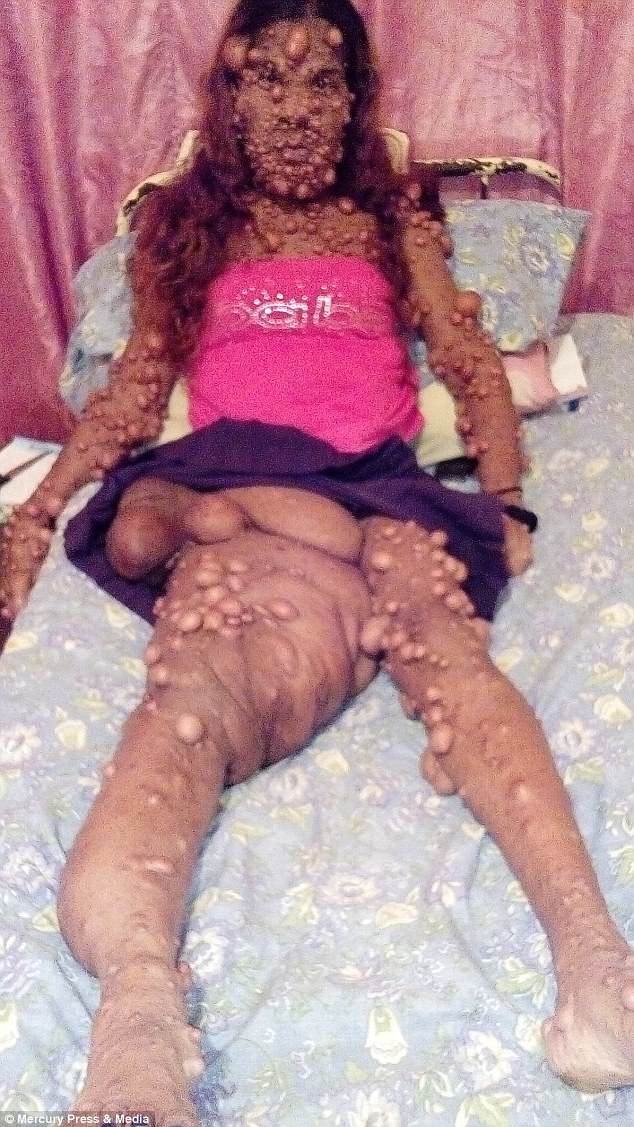 Ms Sahadeo believes her appearance is responsible for the breakdown of her 18-year marriage, as well as her financial difficulties due to employers being horrified by her disorder

Neurofibromatosis type 1 (NF1) is a common genetic condition that affects one in 3,000 people in the UK to some extent.

It is also associated with mild learning difficulties, although most people with NF1 are otherwise healthy and live to a normal life expectancy.

There is no cure, however, surgery can be performed to remove the benign growths.

‘It looks like my skin is a strange bubble wrap’

Speaking of her disorder, Ms Sahadeo said: ‘I have had the condition since birth, but it started getting a lot worse about 15 years ago.

‘It was very small and did not show up much until after the birth of my second child. Then after he was born it got a lot worse.

‘In all I think I have thousands of lumps. On my face and head alone there are probably three thousand or more. It looks like my skin is a strange bubble wrap.

‘It is the ones by my eyes that concern me the most. The doctors say they could remove them to stop them blocking any vision but I am too afraid of the risk to my eyesight.

She said: ‘It’s very painful, especially [on] my leg. Right now when I squeeze the bump something like a large blackhead comes out.

‘Sometimes if you do that they can become infected. Once my entire finger swelled up and it was very painful. I have to be very careful.’ 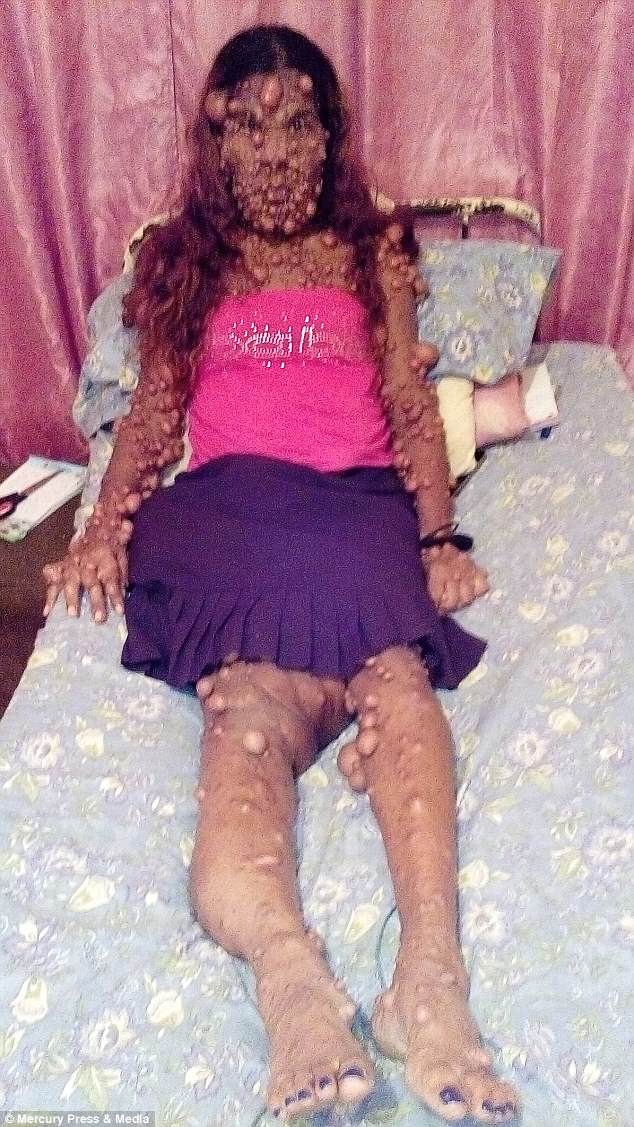 She also has to endure cruel comments and stares from strangers, with children running away from her and some people even suggesting she commit suicide 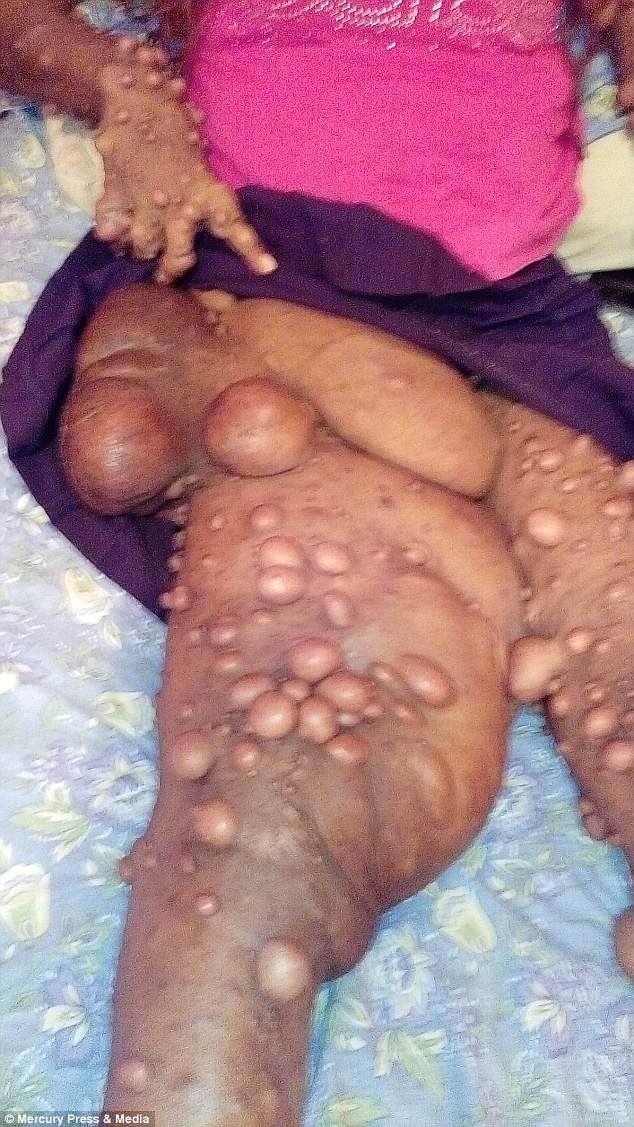 ‘Nobody wants to hire me’

Speaking of how strangers react to her, Ms Sahadeo said: ‘I get a lot of stares if I go out and a lot of people bring me down. I can’t let myself be affected by everyone’s opinions.

‘Some people do say some horrible things. Some people, especially children, get scared of me and run away.

‘One person even told me that if they were in my position they would kill themselves.

‘But I’m a happy person. At the end of the day I do everything that a normal person does. How could I think about doing anything to harm myself?

‘Some people with neurofibromatosis might not feel able to carry on but I do.’

She said: ‘I cannot work because nobody wants to hire me. Financially it gets very difficult sometimes.

‘And I cannot walk far or stand for a long time as the weight of the all the growths is so great and it gets painful.

‘I have been out of a relationship for three years. It is very hard to find someone else.’

Ms Sahadeo’s sons are also deeply affected by her disorder.

She said: ‘My sons are very loving children and I am very proud of them. But sometimes they are shy to bring friends home.

‘I don’t want everyone talking about me to them, and I don’t want people to say mean things to them, so I do not go to school functions and I always talk to teachers on the phone rather than go to see them.

‘I do not go out if I do not have to, but I do go to the shops and to other places I need to visit.’

In a plea for help, Ms Sahadeo said: ‘Here in Trinidad there is no help for me at all.

‘I have had two surgeries to try and clear some of the lumps but they have swollen up again.

‘I would love to have proper treatment. A couple of years ago I travelled to a clinic in Maryland for four days and they were able to help me.

‘I would like to go back or try anywhere else that could help me, whether that is in the US or the UK or anywhere in Europe or Australia. 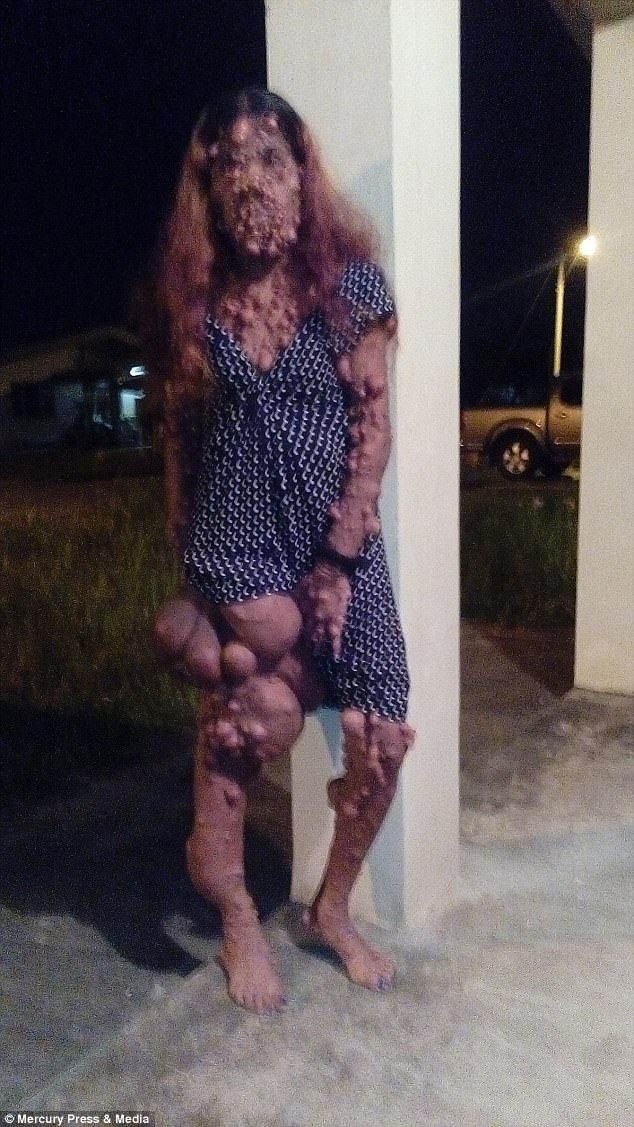 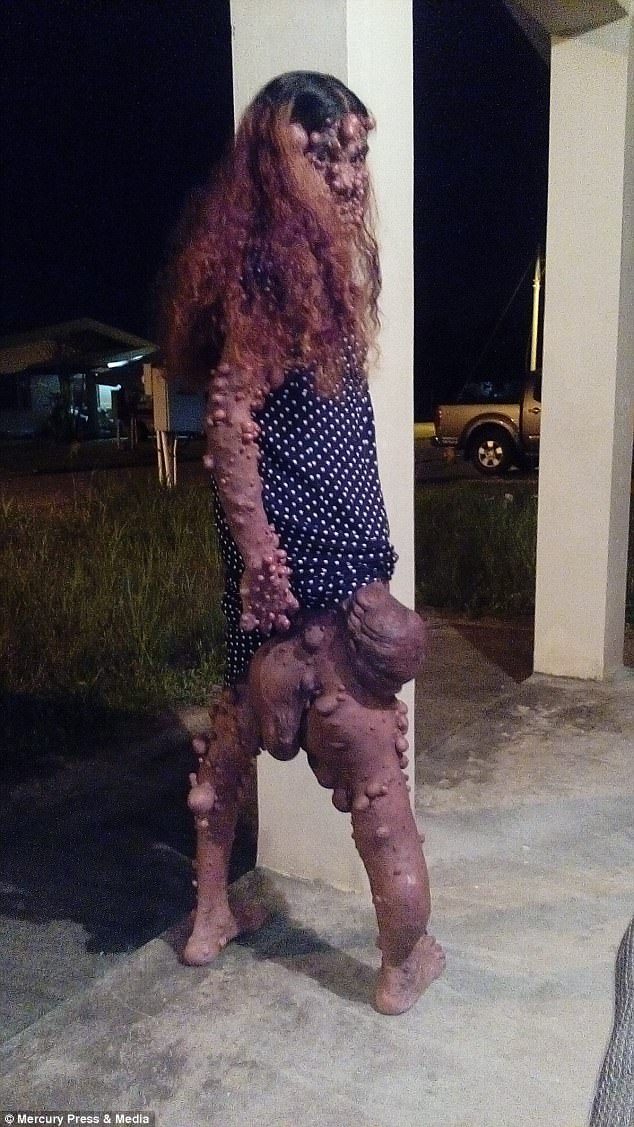 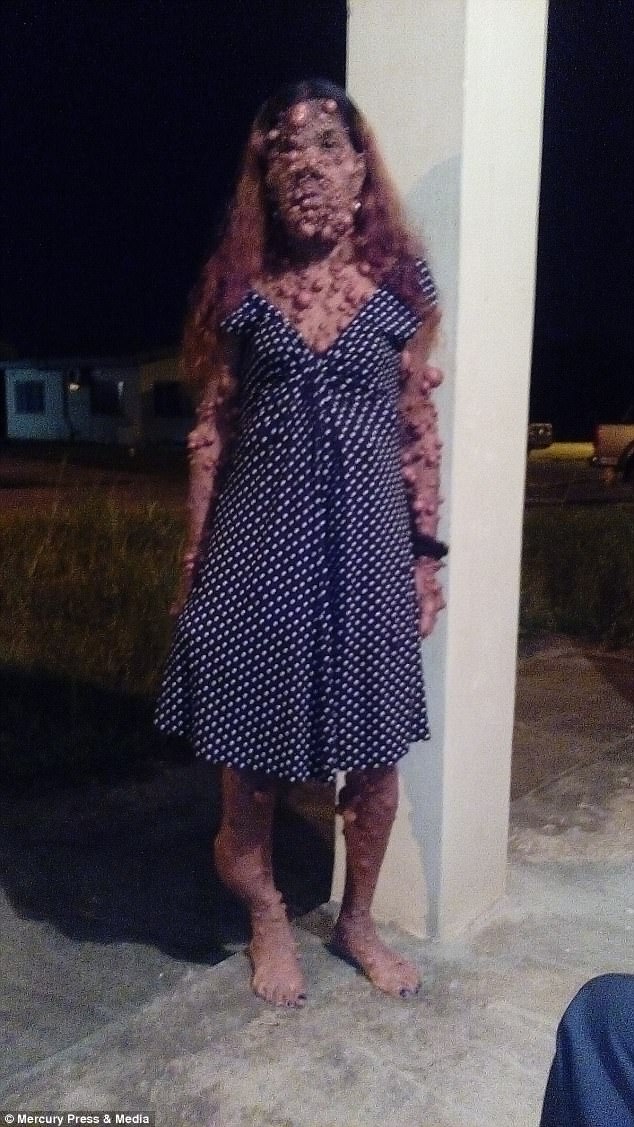