A woman has avoided jail despite admitting cruelty to 25 horses in what the RSPCA described as one of the worst cases it had ever seen.

Mother-of-two Amanda Thorne, 41, from Bodmin, Cornwall, left the horses starving and neglected until one died, a court heard.

She was handed a suspended sentence and banned from keeping equines for life after neglecting the animals for a year.

A judge said the horses were in a ‘dreadful’ condition and said it was the worst cruelty case she had seen in 15 years.

And speaking after the case a long-standing RSPCA investigator said it was the ‘cruelest’ neglect they had witnessed.

The RSPCA only stepped in after concerned neighbours in rural Cornwall raised the alarm, Plymouth Magistrates’ Court heard. 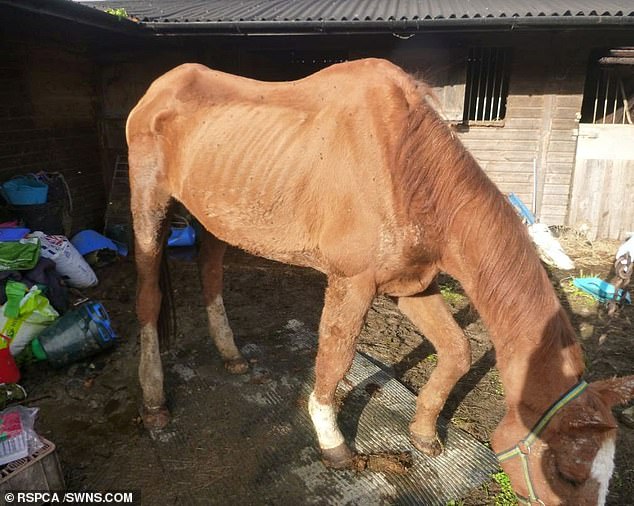 Some of Amanda Thorne’s horses were badly malnourished like this one. They were also kept in difficult conditions 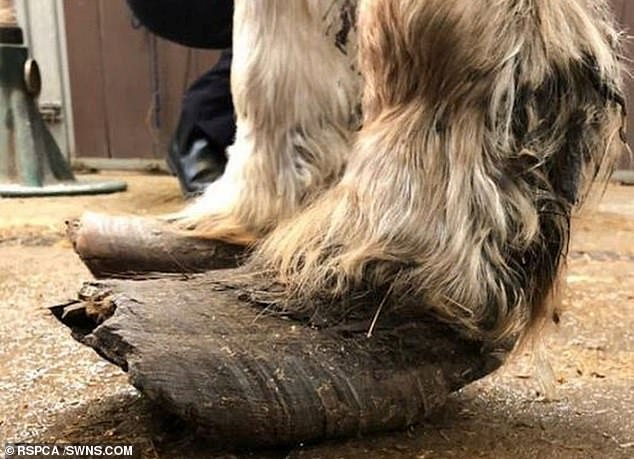 ‘You have shown no remorse for what happened and you blamed others. Concerned members of the public brought this matter to to the attention of the RSPCA.

‘One of the experts said that this could have been a whole lot worse if they had not brought the matter to their attention.’

She added that she had been considering sending farm worker Thorne straight to jail, but decided to suspend her six-month term for 12 months.

Judge Baker said: ‘I have given you a chance, I have given your children a chance and your parents a chance. If you breach any part of the order your feet will not touch the ground.’

The court heard that Thorne worked on a farm and brought up two children as she went through a divorce from her husband. 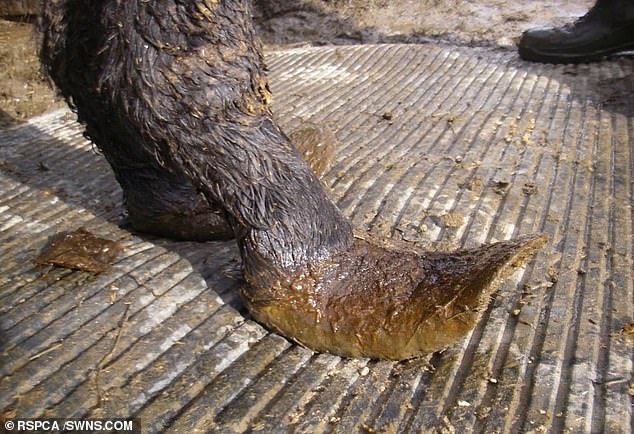 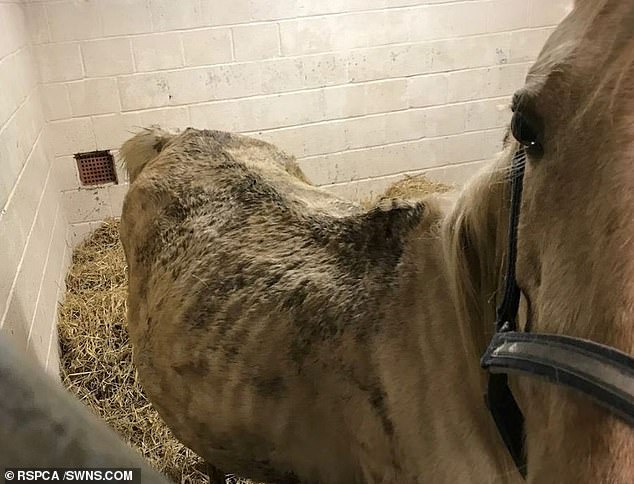 All 25 horses suffered because they did not have clean accommodation or adequate food. Pictured: one of the malnourished horses 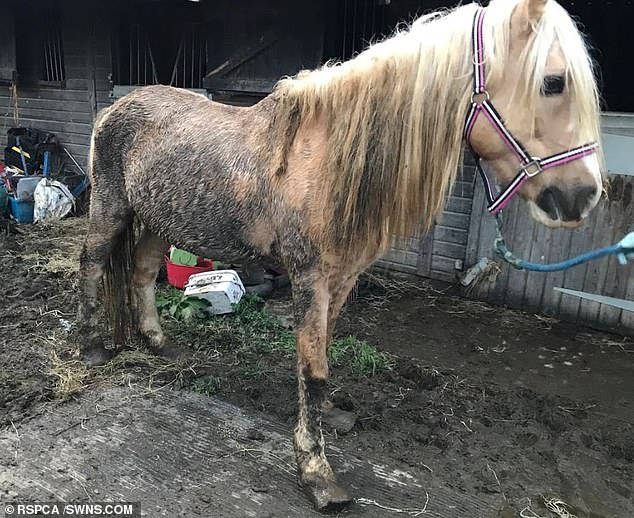 Judge Baker said that Thorne was intelligent and an experienced horsewoman, but was in denial – claiming that her horses were not even suffering

Her own parents helped with the children but had their own health difficulties.

Thorne, of St Wenn, near Bodmin, Cornwall, also has problems with her mental health, which were exacerbated by the court case.

She must complete 15 days of probation’s Rehabilitation Activity Requirement and pay £15,000 towards the RSPCA’s costs.

Thorne must wear an electronic tag as part of a four-month seven-day-a-week curfew.

Judge Baker said that Thorne was intelligent and an experienced horsewoman, but was in denial – claiming that her horses were not even suffering.

Thorne had denied five charges of causing unnecessary suffering to a protected animal and one of ensuring that the needs of all 25 animals were met.

But she was found guilty by the judge after a trial in her absence last month. 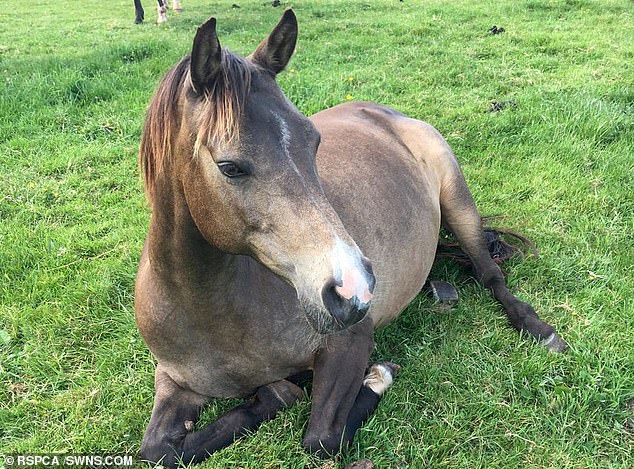 One horse tragically died. The rest were taken by the RSPCA and stabled before being found permanent owners where they have made a good recovery (pictured)

Eight horses had overgrown hooves and four were malnourished because of the neglect.

All 25 horses suffered because they did not have clean accommodation, adequate food, a constant supply of fresh, clean drinking water, a dry lying area, adequate exercise or parasitic control.

One was in need of veterinary care for a foot abscess, rain scald, lymphangitis, cellulitis and wounds.

One horse tragically died. The rest were taken by the RSPCA and stabled before being found permanent owners where they have made a good recovery.

Sentencing was briefly held up as an emotional Thorne refused to come to court after the judge asked the case to be called on.

Judge Baker said she could be held in contempt of court and ordered custodial staff to attend the proceedings.

Nigel Weller, for Thorne, said: ‘I would implore the court that she has learnt her lesson going through court proceedings.’ 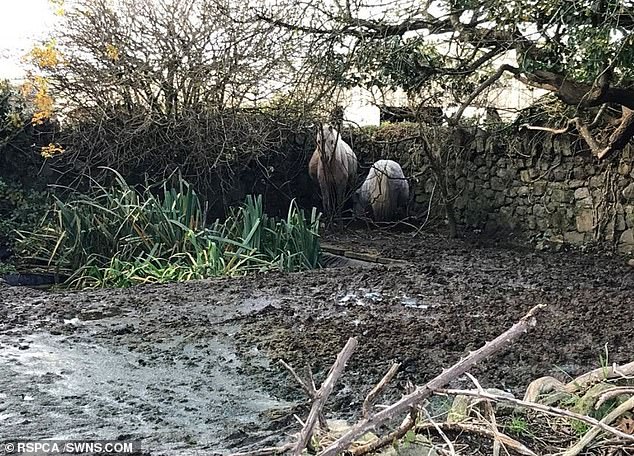 Some of the conditions the horses were kept in at the farm in St Wenn, near Bodmin, Cornwall

He added that she was at low risk of offending.

Mr Weller said that she got up at 4am during the week to milk cows and split her day looking after two children – with help from her parents.

He added that she no longer took her children to school and nursery herself because of ‘harassment’ from other parents who were aware of the case.

The solicitor said the defendant’s husband was in the RAF and was away from home weeks at a time.

RSPCA inspector Jo Pearson, the lead officer, welcomed the sentence after the hearing, particularly the ban on keeping horses.

She said: ‘It is completely the right sentence for this lady. I have been working for the RSPCA as an inspector for 20 years and it is one of the cruelest cases I have ever seen.’

She added: ‘Without members of the public coming to us with the information, she would never have been brought before the courts today.’