Mother-of-two bride, 61, tragically dies on her wedding day, after being diagnosed with cancer

Bride, 61, dies on her wedding day – after being diagnosed with bowel and liver cancer just weeks before marrying her childhood sweetheart

A mother of two has died on her wedding day after she was diagnosed with bowel and liver cancer just two weeks before marrying her childhood sweetheart.

Mother-of-two Helen Felvus, 61, of Cwmbran, South Wales, was forced to bring her wedding to her partner of 44 years, David, forward after receiving the shock diagnosis.

But she tragically died just hours after saying: ‘I do’ on her wedding day – with heartbroken husband David saying: ‘She was a beautiful soul.’

Their daughter Robyn Haynes, 37, said her mother was ‘my superwoman, my best friend, my angel in the sky.’

Mother-of-two Helen Felvus (pictured), 61, of Cwmbran, South Wales, was forced to bring her wedding to partner David forward after receiving the shock diagnosis

She said: ‘Mum never went to the doctors or hospital. We thought it was a kidney infection.’

Helen started to suffer a sharp stabbing pain to her right-hand side but the family believed it was a problem with her kidneys.

The grandmother spoke to her doctor before jetting off on holiday with long-term partner David Felvus, 60, in Tenerife in July.

But the family say her condition deteriorated during the trip – and she came home to be diagnosed with bowel and liver cancer.

Ms Haynes said she took her mother to hospital when she got back from holiday on July 14 and she was admitted.

She said: ‘I called on the fifth day of their holiday and mum couldn’t speak. 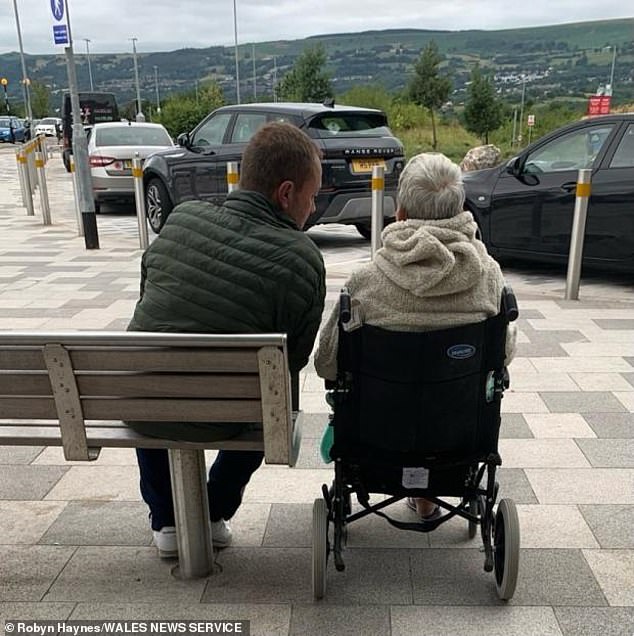 But she tragically died just hours after saying: ‘I do’ on her wedding day – with heartbroken husband David saying: ‘She was a beautiful soul.’ Pictured: Helen and David together

‘Dad faced the phone away so I couldn’t see them, clearly, they both were upset.

‘Mum was taking strong pain relief from friends just to see her through her holiday.’

Ms Haynes said: ‘My mum was like a superwoman – she did everything and then suddenly she got this diagnosis, and everything was affected.

‘When she was diagnosed we thought we had a year initially, which was hard to digest losing her so soon.

‘We thought there was going to be a treatment plan to support her cancer but the hospital said that mum was very poorly and all they could do was make her comfortable.’

Helen tragically died on July 30 just hours after the service.

Her daughter added she now wants to raise awareness of the symptoms of liver and bowel cancer so others didn’t suffer.

She said: ‘If you are having pains in your stomach or if something isn’t feeling right go to the hospital or doctor.

‘I wouldn’t want any other family to go through what we’re going through because it’s devastating.’

The family are raising money funeral costs and have already reached over £2,800.