A mother-of-two who felt she had lost her identity due to alopecia has shaved her head to embrace her beauty.

Chloe Heaton, 28, of Lancashire, first saw signs of losing her hair in 2017, when a bald patch started off the size of a pound coin.

The youth worker felt ‘ruined’ and wanted to ‘disappear’ as she lost her long locks, wearing headscarves for nearly two years to cover bald patches.

But with the strength of her family, including husband Ben, Mrs Heaton shaved her head to boost her confidence, raising almost £2,000 for charity.

Chloe Heaton, 28, of Lancashire, shaved her hair off to boost her confidence after she suffered from alopecia 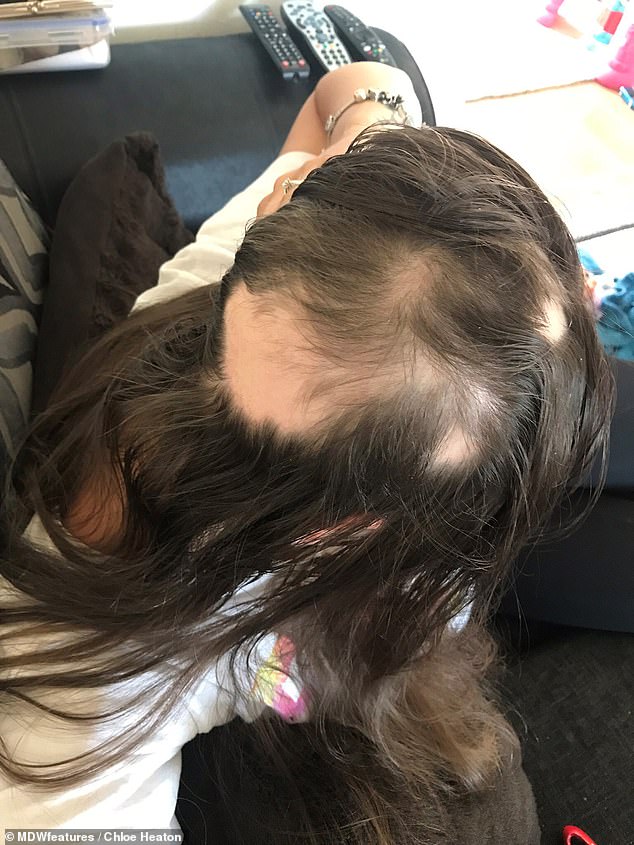 Mrs Heaton, pictured when her alopecia was at its worst, said she felt ‘ruined’ and wanted to ‘disappear’ due to the hair loss condition 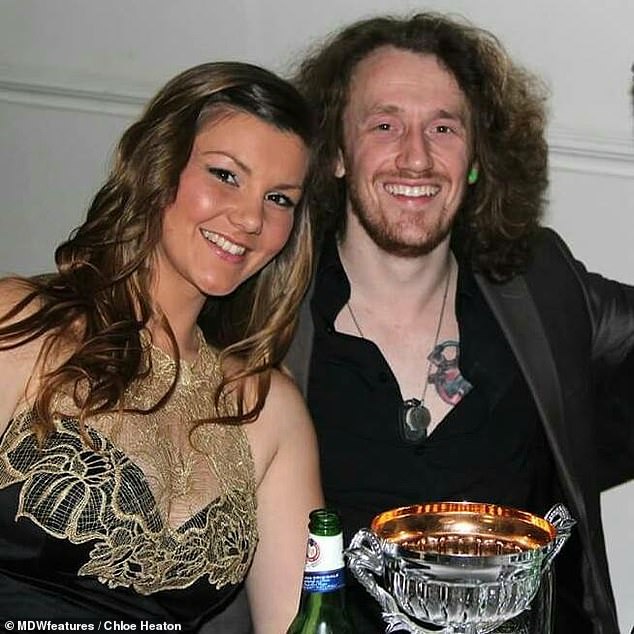 Mrs Heaton said her husband, Ben, is her biggest fan and told her she looked beautiful

Mrs Heaton was at a race event in 2017 with her husband, a motorcycle racer, when she felt a soft patch on the back of her head and began to panic.

She felt devastated when she was diagnosed with the incurable alopecia – a general term for hair loss.

Alopecia can sometimes be hereditary, and some types are believed to be an autoimmune disease.

‘My world stopped and I wanted to disappear,’ Mrs Heaton said. ‘This had an effect on everything, as you can imagine.’

WHAT IS ALOPECIA AREATA?

Alopecia areata – a patchy version of alopecia – is an autoimmune condition in which the immune system causes hair to fall out.

It can affect hair on any part of the body and can happen to anyone at any age – it can be triggered by stress.

The hair usually begins to fall out in patches and leave bald, smooth areas.

It is not possible for doctors to predict how much hair someone will lose, nor can they tell if the hair will ever grow back.

Alopecia areata cannot be cured but if only patches of hair are lost there is an approximately 60 to 80 per cent chance of it growing back within a year.

However, there is no guarantee it will grow back and doctors cannot predict whether it will, nor how much hair will be lost.

Mrs Heaton took pride in her hair and had deliberately decided to grow a long length to cut it and donate it to charity.

She said: ‘I was twenty-seven-years-old at a race event when I ran my fingers through my hair; I felt the most bizarre soft patch on the back of my head… It started out as the size of a pound coin.

‘I was absolutely devastated and felt like my world had come to a stop. I’ve always looked after my hair and took pride in it.

‘So, for something to sneak in the night and rob me of, what I thought was my identity, I felt ruined.’

Mrs Heaton didn’t tell anyone for at least a year and a half to avoid embarrassment.

She said: ‘Nobody knew or even realised. I was a master at covering it up whilst I could. I still didn’t tell people, even when wearing a headscarf until they asked (which wasn’t often).

‘All I wanted to do was hide in my house and not leave. I had constant support off my husband and two girls all the time.’

The mother to Miya, eight, and Daisy, one-years-old, decided to turn a negative situation into a positive one by shaving the rest of her hair off to help raise money for Alopecia UK and raise awareness of the condition.

She said: ‘They [her family] always told me how beautiful I was.

The mother to Miya, eight, and Daisy, one-years-old, decided to turn a negative situation into a positive one by shaving the rest of her hair off to help raise money for Alopecia UK at Aintree Racecourse, York, in August 2018. 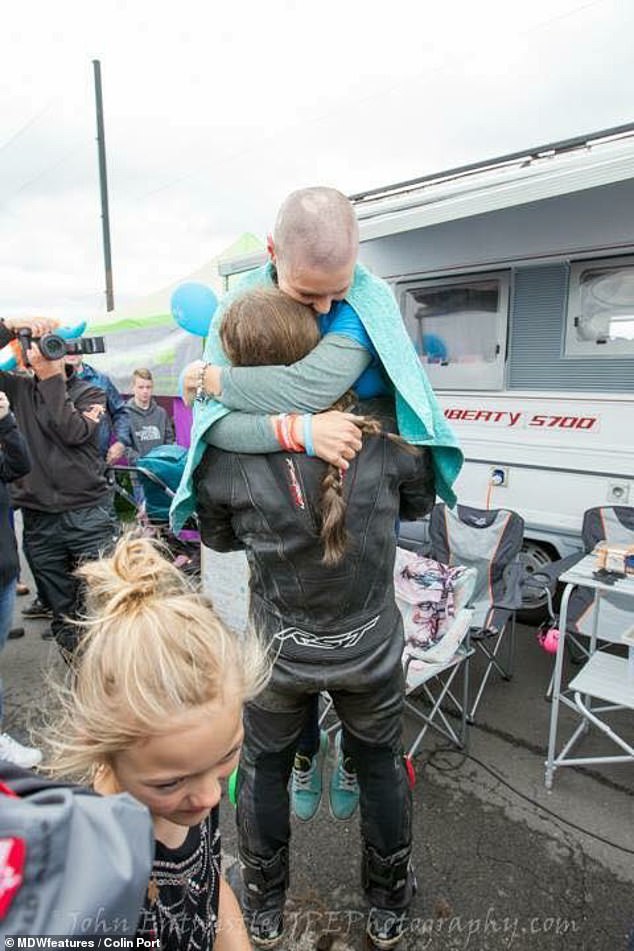 The mother to Miya, eight, and Daisy, one-years-old, decided to turn a negative situation into a positive one by shaving the rest of her hair off to help raise money for Alopecia UK 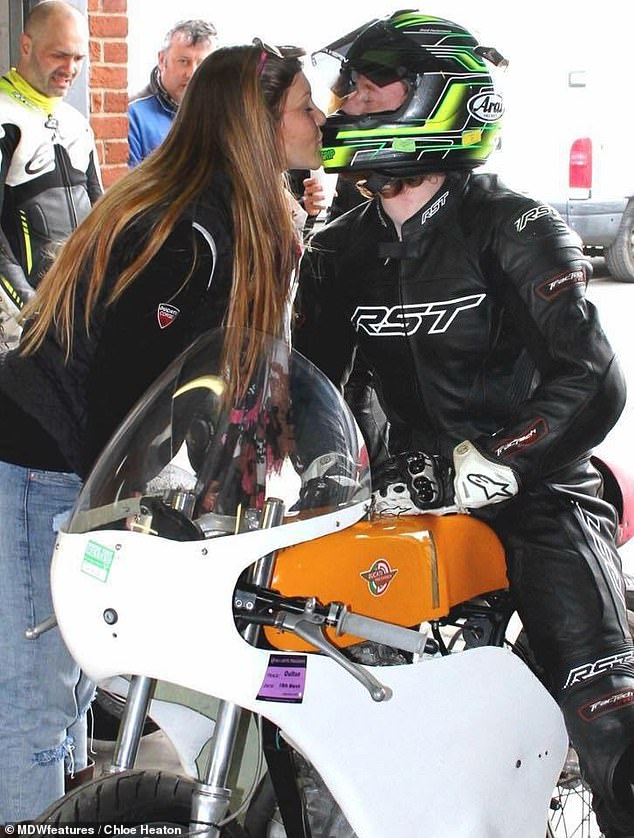 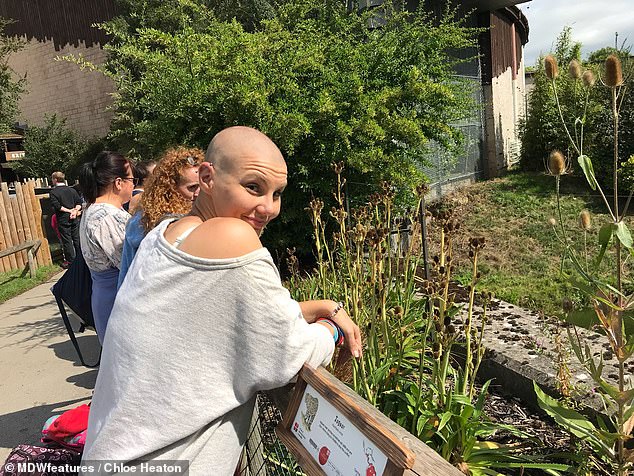 ‘I originally wanted to grow my hair long, so I could donate it. Unfortunately, my hair didn’t meet the criteria, so I have decided to keep it and frame it.

‘I needed reassurance when it came to the big shave day at Aintree. I  had to ask close family and friends to make sure I was doing the right thing.

‘Of course, I was, I just needed the confirmation.

‘I was quite numb at the idea and didn’t think about it really until the night before.’

She said: ‘After I exceeded my target I was absolutely astounded. I couldn’t believe the support I had received. I only wanted to raise £500 so to now be just shy of £2,000 I’m blown away.’ 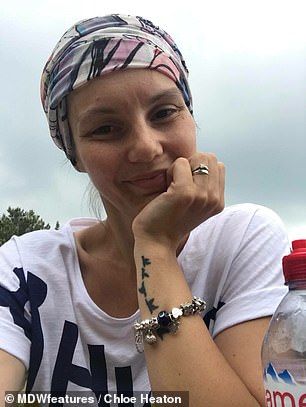 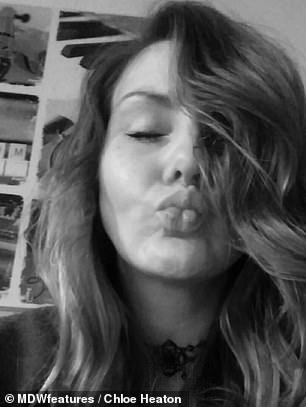 Mrs Heaton, pictured when she first started wearing headscarves to hide her alopecia, said no one other than her family knew about her condition for a year and a half 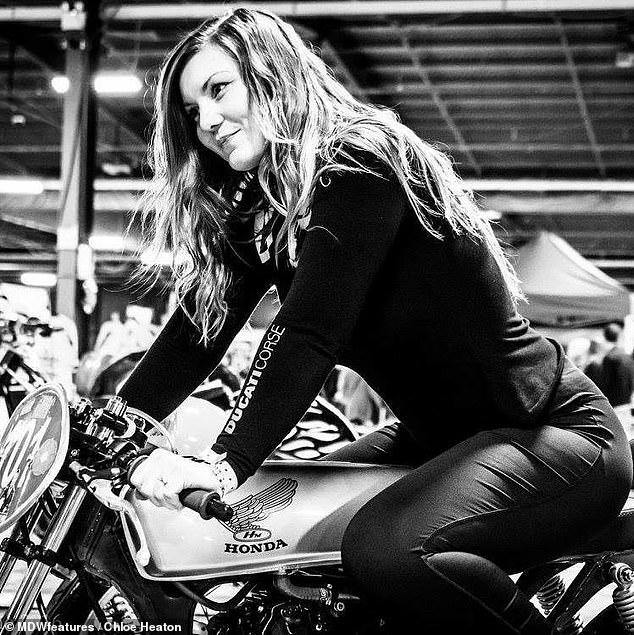 ‘I still get self-conscious and feel everyone’s eyes on me.

‘The other issue I had was doing the school run or food shop; well just going out altogether.. Before I shaved my head, I used to wear headscarves all the time. I felt I could hide behind them.’

But Mrs Heaton has made it her mission to embrace her beauty on social media to inspire others to love their look.

She said: ‘I wanted to turn the negative into a positive. Plus, I wanted to raise money for Alopecia UK as they aren’t government supported and don’t receive much help.

‘The only donations they receive are from the public. I wanted to raise as much as possible for them and also bring awareness to a taboo illness.’

‘I had a lot of support and advice too from a lady called Amy at Alopecia UK. We spoke a lot through email and she was amazing.’

But Mrs Heaton said she owes most of her confidence to her husband.

‘Ben is my number one fan and I am his,’ she said.

‘My family and friends think it’s great that I’m fully embracing myself. They all tell me how much I suit it and that I can “pull it off”. I was even told I had a nice shaped head.

‘Be strong! Embrace as much positivity as you can and let go of the negative. No one can make you do any better, only you as you do everything in your own time.’