A businesswoman who smashed a glass of vodka on a teenager’s face while serving a suspended sentence for threatening her own daughter with a knife has been jailed.

Kelly Dunning, 36, attacked 18-year old Casey Pritchard in response to the teenager asking her to move so her friend could sit back down beside her.

The mother-of-two had sat in the empty chair while Miss Pritchard’s friend was in the toilet.

When asked to move, Dunning demanded the victim fight her outside and threatened to set her own teenage daughter on her.

Miss Pritchard suffered wounds to her forehead and the bridge of her nose and has been left with permanent scarring to her face.

Police who arrested Dunning, of Stockport, Greater Manchester, discovered she was in breach of a suspended jail term for threatening her own daughter at knifepoint.

She had also been issued with a five-year Criminal Behaviour Order following trouble with her neighbours.

Dunning blamed her violent behaviour on resorting to ‘extreme alcohol abuse’ after her boyfriend left her on the night she had attended the funeral of her parent. 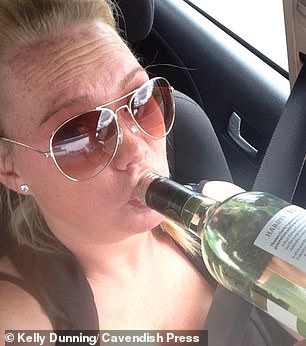 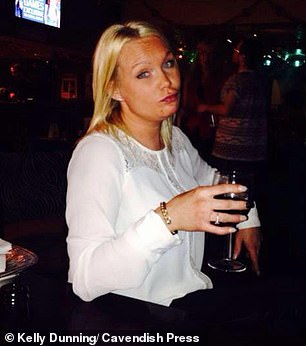 The incident occurred on September 14 last year after Miss Pritchard was out with friends at the Cheshire Line Tavern in Cheadle.

‘But the defendant at one point then offered to get her daughter down who is roughly the same age as Miss Pritchard, to fight her. The defendant then picked up Miss Pritchard’s drink, containing vodka, and threw it into her face both the glass and the contents hit her in the face causing wounds to her forehead and the bridge of her nose.

‘Bar staff contacted the emergency services, the defendant had left the scene however CCTV was obtained, the defendant was identified and that led to her arrest. The complainant says because of this incident her confidence has been knocked, she had permanent scars and she is very self-conscious. It has made her feel as if she doesn’t want to leave the house, her employers were unhappy that she had to take time off work.’

Dunning had 21 previous convictions mainly for driving whilst drunk and numerous breaches of court orders. In October 2017 she was given 18 months jail suspended for two years for possession of a bladed article and threatening behaviour after she was arrested for attacking her daughter after learning she was moving out.

During the incident Dunning who was drinking up to two bottles of wine a day used the knife to tear her daughter’s clothes saying: ‘This is how you want it, this is how we play it’. She also branded her daughter a ‘sl*g’, ‘sl**’ and a ‘dog’ before adding: ‘get the f*** out of my house’ before throwing a knife at a passing car. 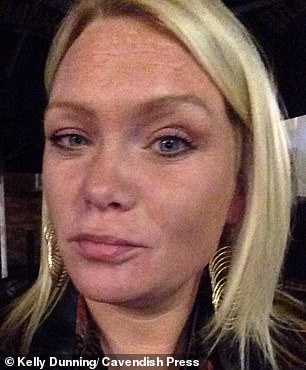 In mitigation defending barrister Thomas Mckail said: ‘She has had difficulties on and off throughout her life with alcohol prior to 2017 she was in a relationship for nine years she owned a sandwich shop and ran it with another person.

‘She had two children of her own her 18-year-old daughter and a younger child, she was a carer for her grandparents who were both terminally ill with cancer and dementia, they were bed bound. She had a close bond with them and her life was positive and stable.

‘Then her grandparents passed away and on the night of the funeral her partner went out for cigarettes and never came back – he was in fact with another woman and the defendant resorted to extreme alcohol abuse.

Mr McKail added: ‘She has been in the past domestically abused both physically and mentally abused. On the evening of this matter she had attended an alcohol course but prior to that she had discovered that her daughter was in a relationship with a male who had been filming her in sexually provocative positions.

‘She is extremely protective and her trust in men is at an all-time low and she had entered into the meeting and she had to leave to drink that night. She hadn’t consumed alcohol for four months prior. She was making her way home and went into the public house with low mood and emotional wellbeing, she resorted to drink alcohol.

‘She tried to apologise that evening there was no attempt to distance herself or trying to blame anybody. She now lives with her daughter and there are high levels of support in her life. This is a very motivated individual to change her reliance on alcohol she wants to be there as a mother for her daughter.’

But sentencing Judge Tina Landale told Dunning: ‘This offence has had a serious effect on the victim. It is simply too serious for the jail sentence to be suspended.’