A Georgia mother-of-two who beat stage 4 pancreatic cancer has written a letter to Alex Trebek assuring him survival is possible.

Elise Roth Tedeschi, 50, from Smyrna, was given just nine months to live when she was diagnosed with the disease in January 2012.

Pancreatic cancer is notoriously lethal because its symptoms are vague, and rarely appear until late stages when the cancer has spread far, making it harder to treat.

After 11 months of aggressive treatment that included chemotherapy, radiation and multiple surgeries, Tedeschi was declared cancer-free.

Last week, Trebek, the 78-year-old longtime host of Jeopardy, revealed he had stage 4 pancreatic cancer, and that the prognosis was ‘not very encouraging’.

Just three days letter, Tedeschi penned the letter on Daily Meal, stating that she wanted to give the game show host hope that advanced cancer does not necessarily mean terminal cancer. 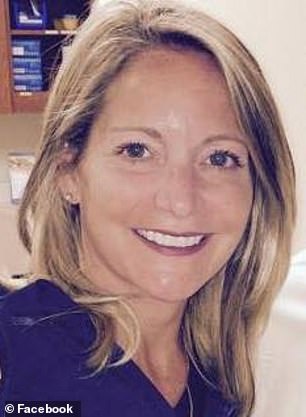 Elise Roth Tedeschi, 50 (left and right), from Smyrna, Georgia was diagnosed with pancreatic cancer in January 2012. The mother-of-two was given nine months to live at the time 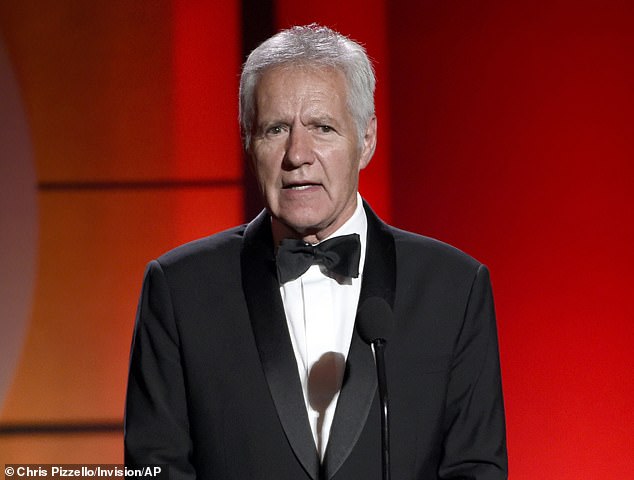 An open letter she wrote to Jeopardy! host Alex Trebek, who was also diagnosed with stage 4 pancreatic cancer, has gone viral. Pictured: Trebek at Daytime Emmy Awards in April 2017

Tedeschi told Florida Today that she began experiencing back pain in 2011. She tried epidurals, muscle relaxers and acupuncture, but nothing worked.

Finally, she went to see an internal medicine specialist who performed a CT scan, which showed a large mass on her pancreas.

She went to Moffitt Cancer Center in Tampa, Florida, where scans revealed she has advanced pancreatic cancer. It had spread to her liver and to her lungs.

Pancreatic cancer is caused by the abnormal and uncontrolled growth of cells in the pancreas, a large gland in the digestive system.

It typically doesn’t show symptoms in the early stages. Sufferers tend to develop signs, such as back pain and jaundice, when it has spread to other organs.

Less than seven percent of patients survive five years, which means pancreatic cancer has one of the worst survival rates of all common cancers.

Tedeschi said that despite the grim odds she was given – just nine months to live – she was determined to fight.

‘The decision to fight was an easy one, because there was no way that I was leaving my little boys and no way that anyone else was going to marry my husband!’ she wrote.

Tests showed she carried the BRCA2 gene, known to cause breast cancer, and that she needed aggressive treatment. 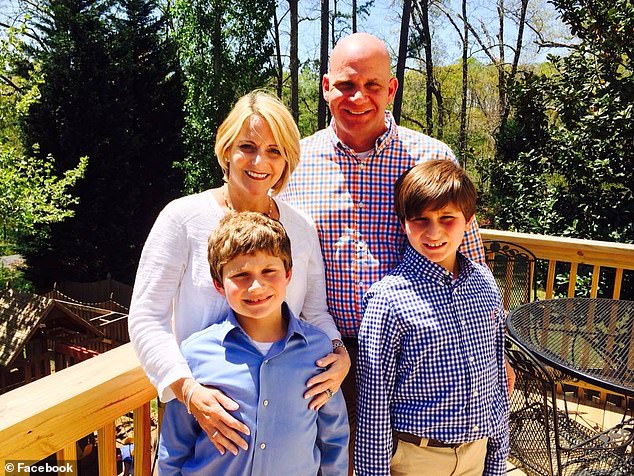 Tedeschi was given an aggressive treatment plan that included 12 rounds of chemotherapy, 25 rounds of radiation with a 24-hour chemotherapy pump, and multiple surgeries. Pictured: Tedeschi with her husband her two sons 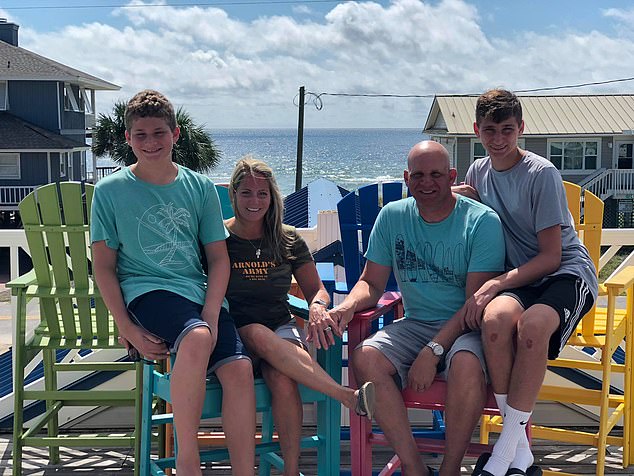 After 11 months of treatment, Tedeschi was declared cancer-free. Pictured: Tedeschi, second from left, with her husband and two sons

Tedeschi wrote that she went through 12 rounds of chemotherapy, 25 rounds of radiation with a 24-hour chemotherapy pump, and multiple surgeries.

One of the procedures, done in November 2012, she underwent a minimally invasive procedure known as a NanoKnife, which delivers high-voltage electrical pulses to the tumor.

‘This procedure is supposed to poke holes in all the cells and essentially they die and dissolve in your body over time,’ she wrote on the Pancreatic Cancer Action Network website.

Finally, Tedeschi was declared cancer-free. She admits that sometimes was it was difficult to maintain a positive attitude.

‘Guess what?! I beat the crap out of stage 4 pancreatic cancer and have been in in full remission for six and a half years.’

Trebek revealed in a video message posted on the YouTube page of Jeopardy! last week of his diagnosis. 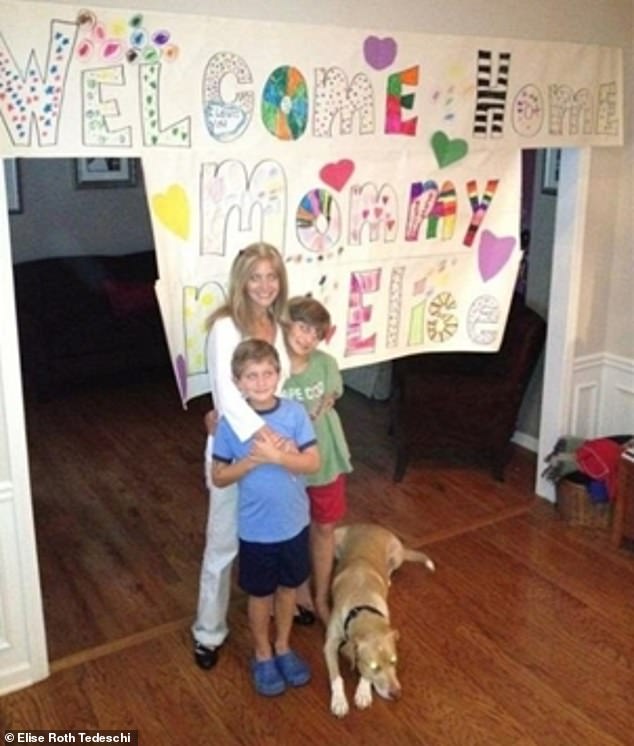 She says she maintained a positive outlook because she ‘didn’t choose to get cancer…but I do get to choose my attitude’. Pictured: Tedeschi with her sons after she came home from the hospital. 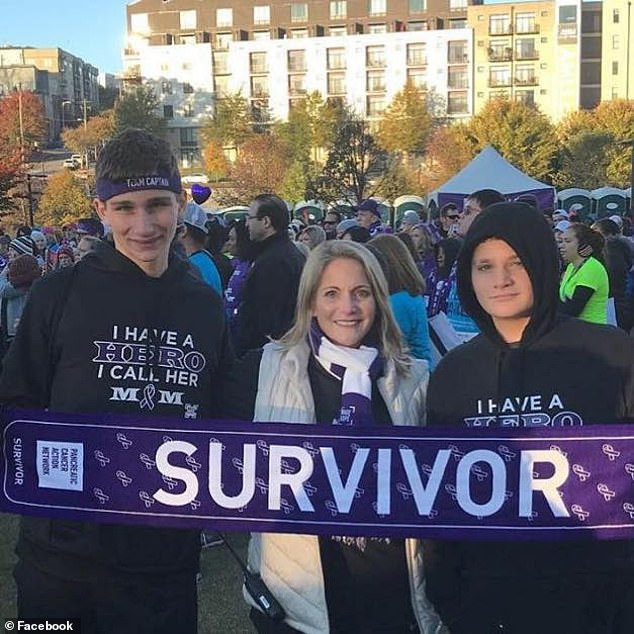 She says she was inspired to write the letter to Trebek to give him hope that he could beat his diagnosis. Pictured: Tedeschi and her sons at an event for the Pancreatic Cancer Action Network 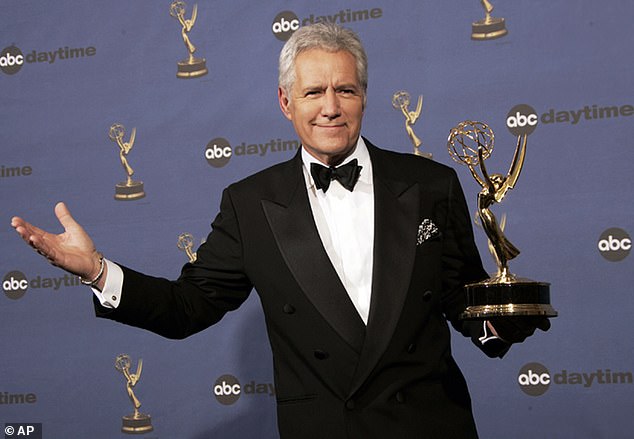 Trebek, 78, revealed the diagnosis in a video message posted on the YouTube page of Jeopardy! last week and vowed to keep fighting. Pictured: Trebek holds the award for outstanding game show host at the Daytime Emmy Awards in April 2006

‘I…wanted to prevent you from reading or hearing some overblown or inaccurate reports regarding my health,’ he told fans.

‘Now normally, the prognosis for this is not very encouraging, but I’m going to fight this, and I’m going to keep working.

‘And with the love and support of my family and friends and with the help of your prayers also, I plan to beat the low survival rate statistics for this disease.

‘Truth told, I have to! Because under the terms of my contract, I have to host Jeopardy! for three more years!

Tedeschi said she wrote her letter to give Trebek hope that he could beat his cancer.

She closed her letter: ‘So Alex Trebek, go kick cancer’s butt – it has no chance against you! You got this!’

WHAT IS PANCREATIC CANCER?

Pancreatic cancer is one of the most lethal forms of the disease. Around 95 percent of people who contract it die from it.

It is the fourth-leading killer in the United States. Around 10,000 people are diagnosed with pancreatic cancer each year in the UK, and 50,000 in the US.

WHAT IS THE CAUSE?

It is caused by the abnormal and uncontrolled growth of cells in the pancreas – a large gland in the digestive system.

WHO HAS THE HIGHEST RISK?

Most cases (90 percent) are in people over the age of 55. Around half of all new cases occur in people aged 75 or older. One in 10 cases are attributed to genetics.

Other causes include age, smoking and other health conditions, including diabetes. About 80 percent of pancreatic cancer patients have some form of diabetes.

WHY IS IT SO LETHAL?

There is no screening method for pancreatic cancer. Pancreatic cancer typically does not show symptoms in the early stages, when it would be more manageable.

Sufferers tend to start developing the tell-tale signs – jaundice and abdominal pain – around stage 3 or 4, when it has likely already spread to other organs.

WHAT ARE THE SURVIVAL RATES?

For all stages of pancreatic cancer combined, the one-year survival rate is 20 percent. At five years, that rate falls to just nine percent.

If the cancer is caught in stage 1A, the five year survival rates is about 14 percent and 12 percent for 1B.

At stage 2, those rates are seven and five percent, respectively. For a pancreatic cancer in its third stage, only three percent of people will survive another five years.

By stage IV, the five-year survival rate falls to just one percent.

WHAT ARE THE TREATMENT OPTIONS?

The only effective treatment is removal of the pancreas. This proves largely ineffective for those whose cancer has spread to other organs. In those cases, palliative care is advised to ease their pain at the end of their life.