A mother who survived the Las Vegas country music festival massacre in 2017, the deadliest mass shooting in US history, has recalled going to heaven then forcing herself to continue living after being shot by Stephen Paddock while she attended the concert with her daughters.

Rosemarie Melanson, 55, was at the Route 91 Harvest festival with her two adult daughters when Paddock rained bullets on the crowd from his suite in the Mandalay Bay Hotel on October 1, 2017.

She was struck in the chest and could not move. Her daughters reluctantly left her after being told that they would die if they did not run for their lives.

They all survived and recalled the harrowing night to ABC’S Nightline for an in-depth retelling of the massacre that will air on Wednesday at 12:35 a.m EST.

‘The next thing I know I was in heaven. And I saw my dad and my two brothers, and my uncle.

Rosemarie Melanson, 55, was at the Route 91 Harvest festival with her two adult daughters when Paddock rained bullets on the crowd from his suite in the Mandalay Bay Hotel. She is pictured with her husband in an interview that will air on Wednesday at 12.35am EST

The bullet hit her in the upper right chest and traveled sideways through her body.

It severed her esophagus, broke several of her ribs, and tore through her intestine, her liver and spleen.

She spent six months in hospital then was released and for the last six months has been in and out of surgeries.

‘I’m stronger than I thought I was,’ she said.

In May, she told CNN: ‘My body just rose up, and I could see my body laying on the ground, and I went to heaven. 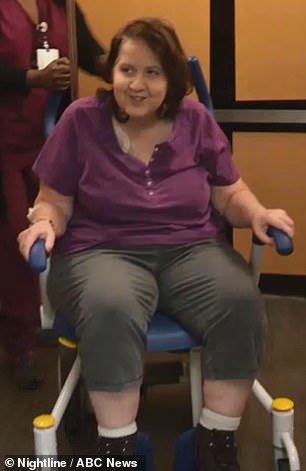 Rosemarie spent six months in the hospital before she was released

‘And it was indescribable — the peace that you felt. But I was told it wasn’t my time, that I had to go back.’

Like the hundreds of others who were shot, Rosemarie and her daughters did not know where the bullets were coming from when they started.

It was only when police started pouring into the crowd once Rosemarie had been struck.

‘A retired firefighter came over and he told us we had to go,” said Paige Melanson, who was wounded in the arm.

“He said that if we wanted to live that we needed to go. I looked into his eyes and he said, ‘You need to go.’ So I did,”‘ Paige recalled in the show.

The firefighter was Don Matthews.

‘He told the girls to go then stayed with their mother and gave her first aid.

He carried her into the back of a pick-up truck and drove her to the hospital where she was eventually reunited with her daughters 11 hours later.

Melanson spent the next six months in the hospital. 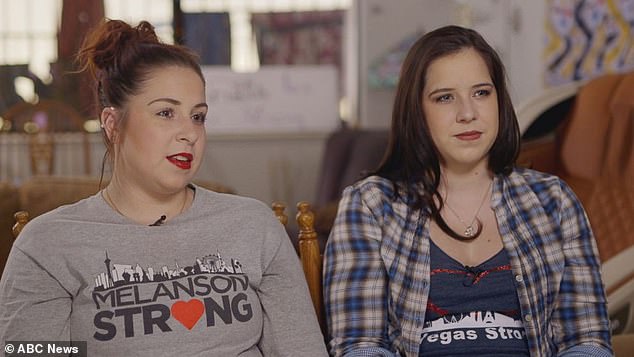 Rosemarie’s daughters Paige and Stephanie were with her. They had to leave her despite her being injured in the chest to save themselves 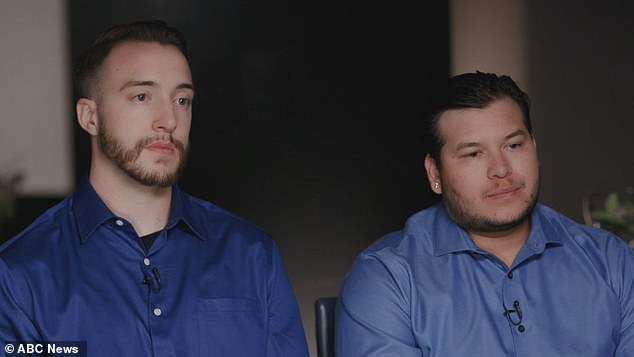 Stephen Schuck (left) was a maintenance engineer for the hotel and Jesus Campos, a security guard, was the first on the 32nd floor

Among others who took part was Jesus Campos, the security guard who was the first to the 32nd floor, where Paddock’s sniper’s nest was.

Paddock, who had set up a small surveillance camera on a room service cart outside his room which gave him a live view of whether or not anyone was approaching his suite, started firing at him in the corridor.

Campos had received a call of a door alarm from a different room on the same floor.

He took the stairs to check on it but when he arrived, the door which accessed the floor had been locked closed with an L-bracket that had been screwed to the floor.

Campos continued walking up to the 33rd floor then took the elevator back down one floor where Paddock saw him coming and immediately opened fire on him when he was walking towards his room. 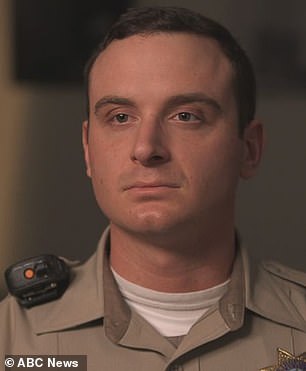 Officer Brandon Engstrom had just started working for the Las Vegas Metropolitan Police Department. It was his second shift when the shooting happened and he was among the first cops on the scene

The guard was struck but immediately took cover and called for back up. Others arrived but were also shot at by Paddock who then took his own life before anyone could get to him.

By the time more officers go to Paddock’s room, they were halted by the camera on the room service cart outside because they could only see wires and feared that it was a booby trap.

‘They get close enough to that room, there’s wires, there’s cameras.

‘What are they walking into? Is that an IED? Is there more than one person? How many people are there?

‘We had nothing,’ Deputy Chief Walsh said.

Among others that took part in the episode were some of the first officers on the scene.

The massacre was on his second day of work.

‘It was our sergeant who had the radio on. Shots came out over the radio.

‘So immediately he yells at us to go to our cars, get ready and go to the concert venue,’ he said.

Another colleague then radioed them while they were on their way to say: ‘Be aware, it is automatic fire, fully automatic fire from an elevated position. Take cover.’ 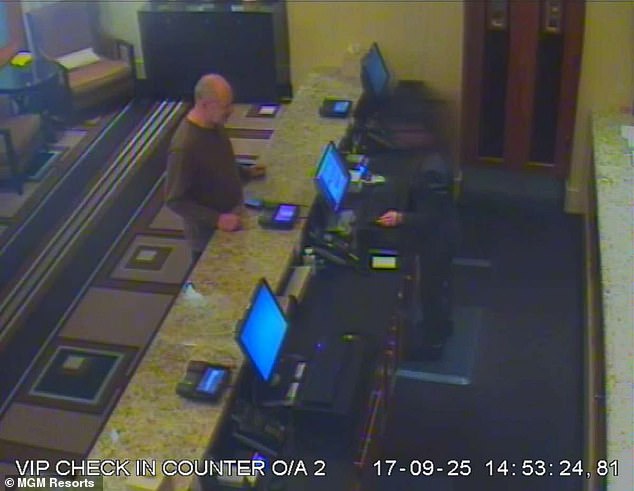 Stephen Paddock is pictured checking into his hotel on the 25th of September, five days before the shooting 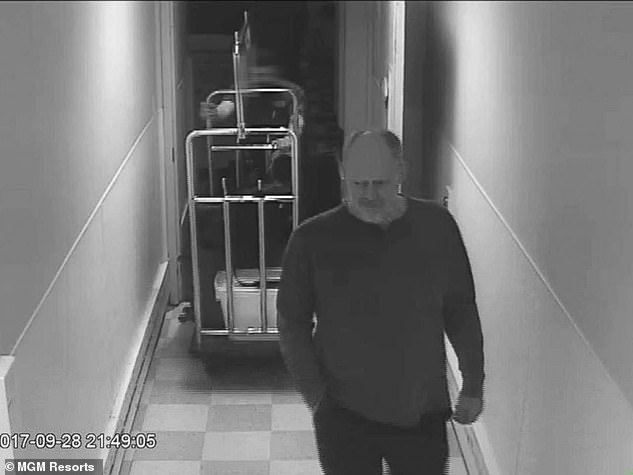 Paddock is shown in one of the casino’s hallways on the 28th of September, two days before the mass attack. He left no manifesto 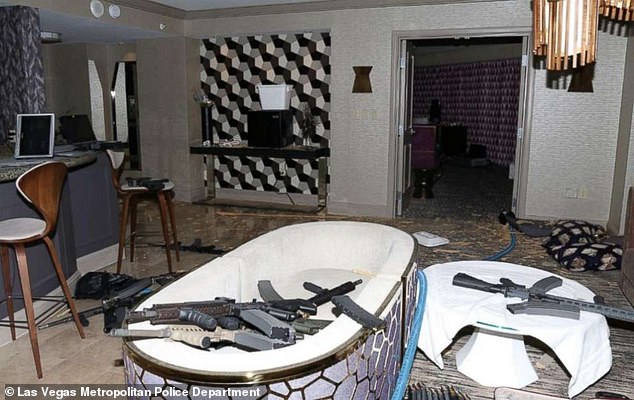 He arrived at the festival site to be confronted by an off-duty cop whose wife had been shot in the head.

They rushed the woman to the nearest hospital in their cruiser, a decision which saved her life, then went back to the site to help others.

‘I’m washing my hands and I said something to the effect, “It’s an effing terrorist attack. Just get everybody here.”

Deputy Chief Andrew Walsh said that he thought at first that Paddock’s attack was the first in a string of coordinated terror attacks.

‘What sticks with me is that fear, that pain in my stomach that this was going to just be the first part of a multifaceted attack,’ he said. 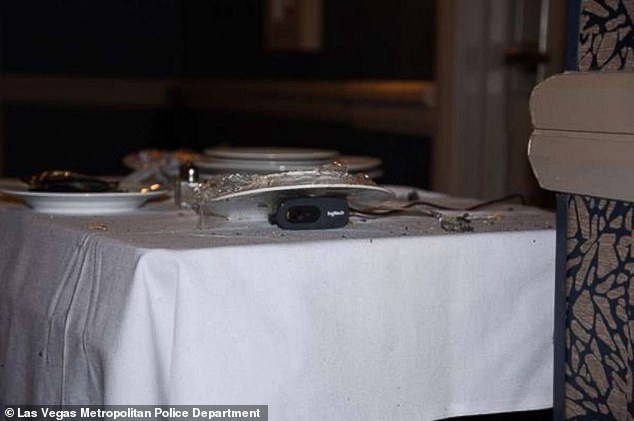 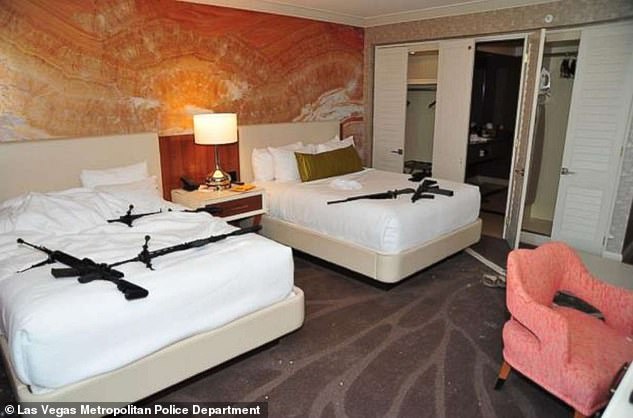 It was caused by hundreds of people phoning 911 to report the shooting happening at different locations at once.

Authorities still do not know what motivated Paddock to carry out the killings.

In total, he moved 21 suitcases into the two suites he had rented without anyone detecting his stockpile of weapons.

MGM, which owns the hotel where he was staying, is now tightening its rules so that anyone who checks into a room which overlooks an outdoor venue will come under intense scrutiny.

Until the shooting, he had been behaving like a normal, high-rolling guest.

‘Everything he did is what you’d expect a normal guest to do: Using food and beverage, restaurants, having things delivered to his room.

‘He just looks like a middle-aged guy with a lot of luggage goin’ up to his room,’ he added.

The full Nightline episode will be shown on ABC on Wednesday at 12.35am EST. 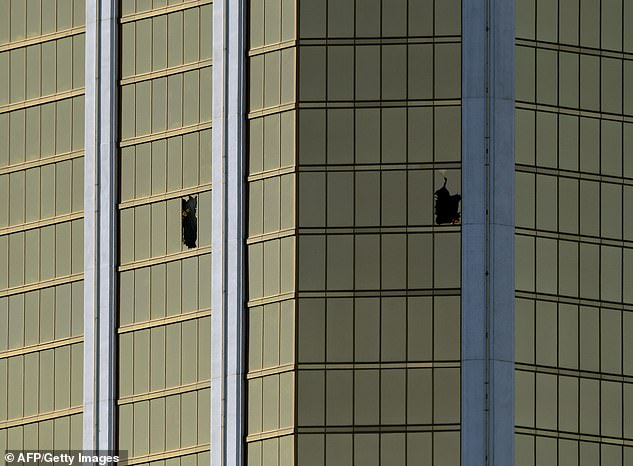