A woman has sparked a heated debate about office break etiquette after revealing she was reprimanded over eating a hot breakfast at work.

The British woman took to Mumsnet to ask if it was unreasonable of her to take five minutes away from her desk to microwave beans or eggs, at around the same time colleagues take a morning tea break.

She explained her line manager had said ‘it had been noticed’ she was taking time out of work and that she should ‘split’ the break across the morning and lunchtime if she wanted to continue.

The woman was baffled, saying she thought a quick screen break should be allowed.

However many users argued she was missing the point of the complaint and that the issue was her hot, potentially ‘smelly’ food, rather than the time it took to cook.

The woman asked if it was unreasonable of her to microwave ‘a tub of beans’ or ‘eggs she has already put in a bowl and whisked at home’ during her first few hours at work. Stock image 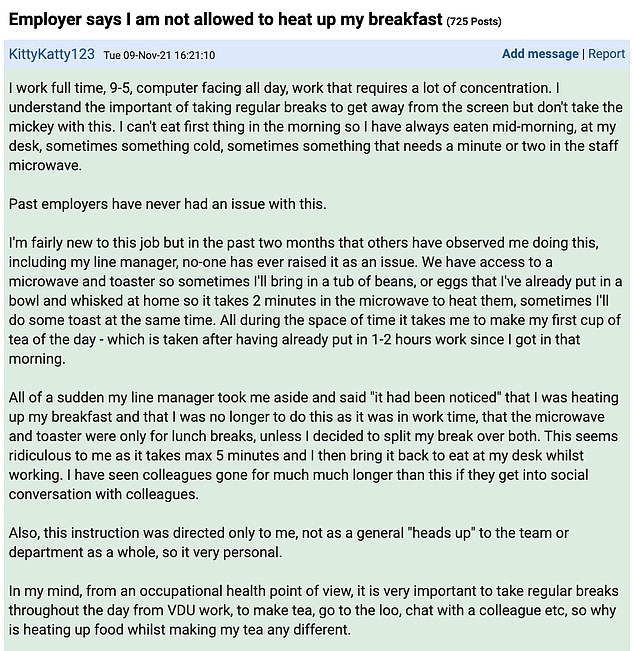 In a lengthy post, she explained her line manager had said ‘it had been noticed’ she was stepping away from her desk and that she should cease having hot breakfasts on office time

‘I’m fairly new to this job but in the past two months that others have observed me doing this, including my line manager, no-one has ever raised it as an issue.

‘We have access to a microwave and toaster so sometimes I’ll bring in a tub of beans, or eggs that I’ve already put in a bowl and whisked at home so it takes 2 minutes in the microwave to heat them, sometimes I’ll do some toast at the same time.’

The woman revealed that although she was leaving her desk, she was heating up her breakfasts in the time it took her to make a cup of tea, and she would always make sure to work for up to two hours before eating.

But the line manager had approached her to say the microwave and toaster should only be used during lunch, unless she decided to ‘split her break over both’.

However many users argued she was missing the point of the complaint and that the issue was her hot, potentially ‘smelly’ food, rather than the time it took to cook

After reading her situation, commenters—many of whom work in a office themselves—quickly informed her that they thought her behaviour had been unprofessional.

One person wrote: ‘Hot food in offices is often unpopular because of smells. Eating that sort of stuff in front of your computer also risks spills. I don’t think they have to provide a microwave at all if they don’t want to.’

Another posted: ‘YABU (you’re being unreasonable) to microwave eggs and expect people not to notice, they smell. Really, if you want to eat at your desk it during work time it should be something snacky, like a cereal bar or nuts in a bag or something. Beans or eggs with toast is a meal not a snack, so not something that you should have at your desk while you’re meant to be working.

‘Your point about regular breaks is not valid. You can have a break without having a cooked breakfast.’ 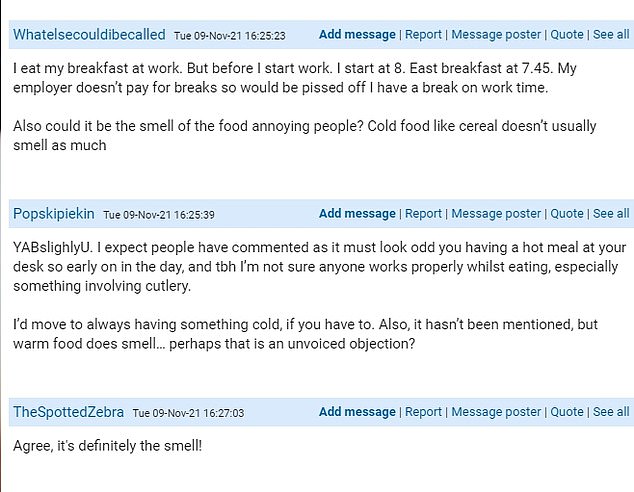 Another agreed saying: ‘I think having beans, eggs and toast is taking the mickey tbh. Just have a cereal bar or something easier, and a bit more subtle. And yes, the smell is probably off putting in an open plan office.’

A third could barely contemplate having to put up with the odour: ‘The smell of eggs being eaten in an office would make me heave. I’d complain about it. Just take a cold breakfast in or wait to eat at lunch time.’

A select few people, however, disagreed with the majority and upheld the opinion that anyone should be able to eat whatever they want at their desks.

One person said: ‘I used to work evenings and people would have whole meals at their desk. Curry, chilli, reheated pizza, pasta. I always liked seeing what people had.’

Another commenter was surprised at the response the post had recieved saying: ‘Eggs don’t really smell of anything, and are a filling meal. Eating a croissant every day isn’t too healthy, especially a sweet one.

‘Maybe you should start heating up some mackerel for lunch to get your protein in.’

A third contributed: ‘What’s wrong with being able to smell food. I agree with you and it’s difficult to be expected to eat food you don’t really want, at a time that doesn’t suit you, but you’re new to the job, so you have to be careful to not annoy them too much.

‘I would make my eggs and bread into an egg mayonnaise sandwich and eat that at my desk at a time my choosing. Then you’re not breaking the ‘no hot food in the morning’ rule and you get to eat what you want, when it suits you. They can’t argue with that, can they?’