Mother reveals how her infant daughter almost lost her TOES

A mother has told how her infant daughter almost lost two of her toes after they became bound in a strand of hair.

Gemma Fraser, from Edinburgh, was shocked to discover one of her long blonde locks had become twisted around baby Orla’s tiny toes, cutting off circulation and leaving them ‘bulging and bright red’.

The hair was tied so tight that it cut the toes in half ‘like cheese wire’.

Most of the hair was snipped away by a paramedic that same day but it took five weeks – and an excruciating hospital procedure – before the last of it was finally removed.

Now Gemma, 35, is sharing her story in the hope of warning other parents over the dangers of ‘hair tourniquet syndrome’.

Warning: Mother-of-two Gemma Fraser, 35, described how a strand of hair had become tied around baby Orla’s (pictured) toes, cutting off circulation and leaving her screaming in pain 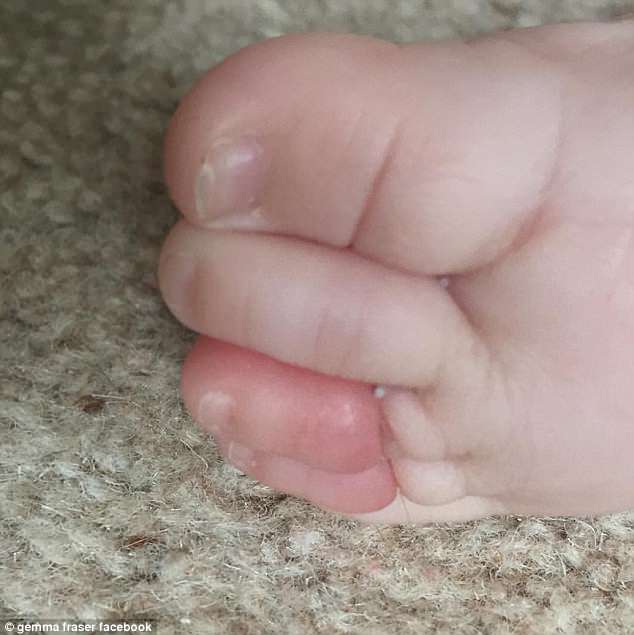 Agony: The hair had effectively formed a tourniquet around two toes on Orla’s left foot, restricting blood flow to the tips and leaving them looking ‘bulging and bright red’

The journalist, who also has daughter Poppy, six, told how she first knew something was wrong when she was changing Orla, then three months old, in June last year.

Speaking to FEMAIL, she said: ‘We had been out at soft play, we came home, I was changing her nappy and I noticed her toes were bulging, bright red, a purply colour.

‘I thought maybe she’d had an allergicc reaction to something. That’s what it looked like. But when I was able to inspect it a bit more I saw there was a hair wrapped around two of her toes. They were bound together.

‘She had been out of sorts all weekend, she was crying, and I thought, “how long has it been there? How long have I got before it cuts the circulation off completely?”.’ 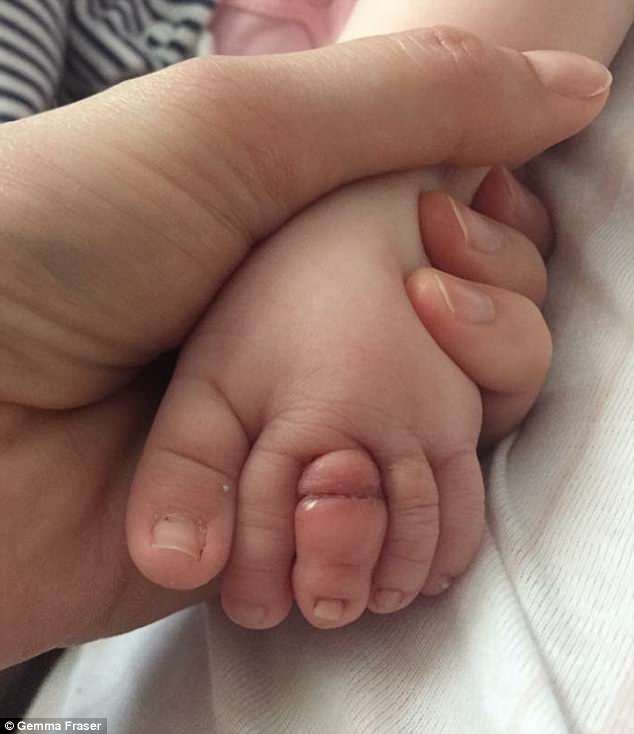 Surgery: Doctors were eventually forced to cut into Orla’s toe to remove the rest of the hair

Gemma tried to pull off the hair herself but the hair was wrapped too tight and Orla was ‘screaming’ in pain.

What is hair tourniquet  syndrome and how is it treated?

Hair tourniquet syndrome is a medical condition where a hair or thread becomes tightly tied to a finger, toe or genitals, cutting off circulation and potentially leading to infection and amputation.

The problem usually affects young babies and is most common when mothers are shedding hair post-pregnancy.

The hair can become trapped in blankets, socks or baby-grows and wrap around the appendage.

The hair is often so thin it can be easily missed by parents – and doctors.

It is identified with magnification and cut away usually with small scissors.

Sometimes surgery is required to remove the ligature. Antibiotics may be prescribed for any infection.

After phoning partner Paddy, 35, who works in finance, Gemma dialled 999 and a paramedic arrived to inspect the wounds.

She said: ‘The paramedic managed to get most of it off with a tiny pair of scissors. It took him about 45 minutes. Orla was screaming, it was really painful and I just had to hold her while he was trying to cut it off.’

Afterwards Gemma took Orla to the Royal Hospital for Sick Children, where doctors assured her all of the hair had been removed and prescribed a course of antibiotic cream.

But while one of the toes healed very quickly over the next few days, the other continued to look as though it had been ‘cut in half’, Gemma said.

She continued: ‘Time passed and it got infected. It was all yellow and there was puss coming out of the wound. I took her to the doctor and he gave her antibiotics.

‘The infection cleared up but the toe was still three of four times larger than the toe on the other foot.

‘It was still very swollen, it was still an open wound. I was worried that it was going to continually get infected. My concern was that it wasn’t healing.’ 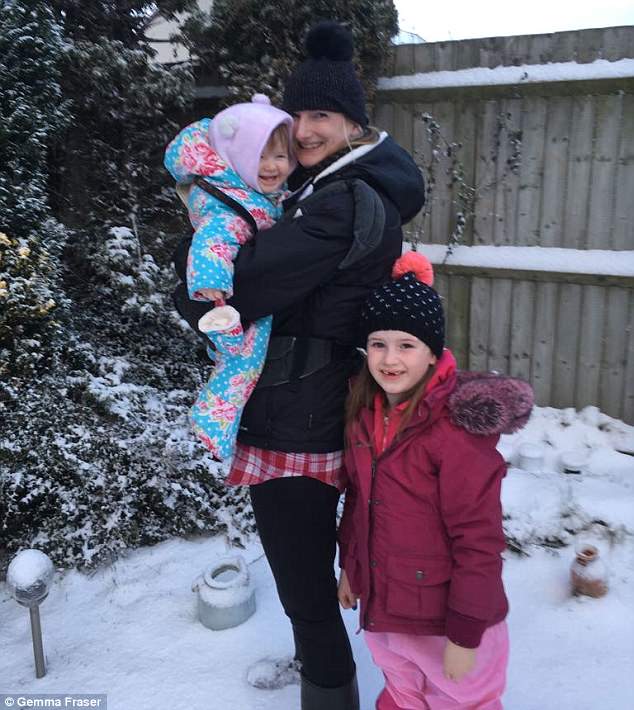 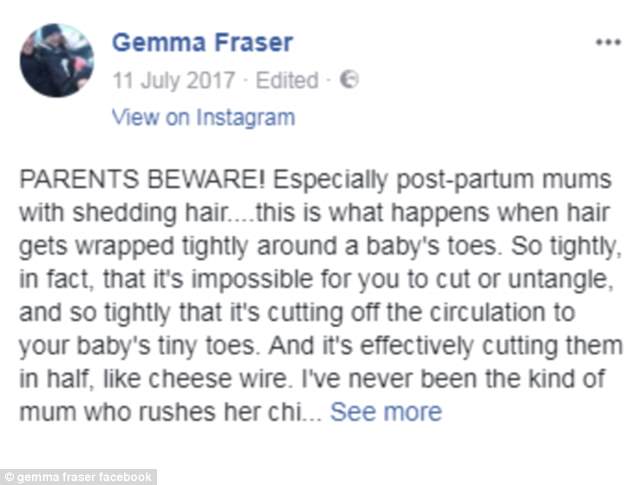 Convinced there was still something wrong, Gemma booked an appointment with the GP, who referred her to the hospital’s plastic surgery department.

It was then a nurse said she believed there was still hair that was preventing the toe from healing and recommended Orla for surgery that same day.

Gemma said: ‘It’s amazing to think a hair that’s fallen out of my head can causee so much damage.

‘I just want people to be aware that this can happen. Especially as mothers can shed hair post-partum. There will be a lot of hair lying around people’s houses.

‘I want people to have a quick check when they are giving a bath or changing a nappy. Check that you can put a finger in the space between each finger and each toe.

‘Hair can also get trapped in a sock or in a bay grow so be careful.

‘We were just lucky that we got the hair cut off on time before it caused permanent damage – or worse.’

The surgeon took into account Orla’s age and decided against a general anesthetic, instead preparing the wound with a local anesthetic numbing wipe.

Gemma said: ‘He got a scalpel and reopened her toe down to her tendon and scraped all around it to cut any hair that was still there. It had been weeks so there was a lot of build up of stuff inside.’

‘Orla was screaming and all I could do was hold her. I knew it was for the best. I just had to be there and cuddle her but it was pretty harrowing to see her in such pain.’

Orla’s toe was bandaged and she was given another course of antibiotics to prevent any further infection. After that, the wound began to eventually heal.

Orla is now a year old and carries just the smallest scar from her ordeal.

She added: ‘We were just lucky that we got the hair cut off on time before it caused permanent damage – or worse.’