Mother reveals how her transgender son, 14, told her in a letter that he wanted to live as a boy

A schoolgirl became a boy overnight after writing a note to his parents informing them that he is now to be known as Josh.

Josh Parsons, 14 – formerly known as Sarah – wrote to his mother, Lisa, 41, and stepfather, Darren Nickolson, 41, that he had decided to change his name and gender.

Despite the initial shock, his parents, from Orpington, London, fully supported his decision and the next day Josh got rid of all of his female clothes and told his peers at school about his transition.

Josh Parsons, 14 – formerly known as Sarah – told his mother, Lisa, 41, and stepfather, Darren Nickolson, 41, (pictured) in a note that he had decided to change his name and gender

After shaving his head and redecorating his bedroom Josh is happier than ever with his new gender.

Mother Lisa says she could not be more proud of her son and says she always thought he was different to his three older sisters.

The family have embraced Josh’s physical change and have said they will pay for surgery when he’s 16 years old.

Josh – who has been transitioning since April this year – is now on the waiting list for NHS hormone treatments. 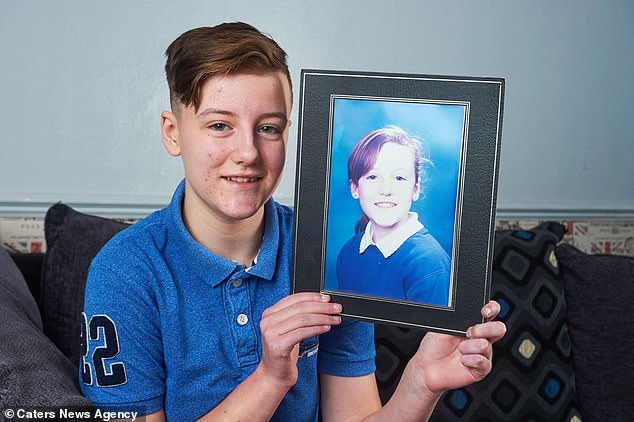 After shaving his head and redecorating his bedroom so it looks more ‘masculine’, Josh is happy with his new gender. He is pictured holding a photo of himself from before his transition

Lisa said: ‘I accepted that my daughter wanted to be a boy straight away. Josh who was then called Sarah left us a note saying that loved us but wanted to be known as Josh from now on.

‘And from that moment his life as Sarah ended and ever since April we have been addressing Josh as a male.

‘He has shaved his head and is happier than I’ve ever seen him.

‘Josh also told his school that he wanted to change his gender and we’ve supported him ever since. I think it’s important for children to be able to discuss their issues and Josh was always different to his older sisters. 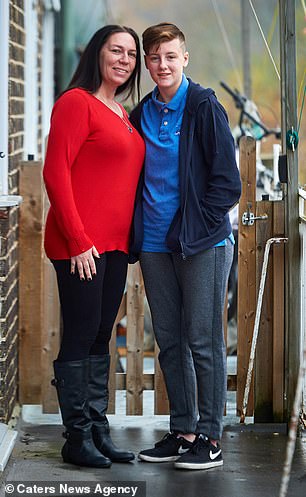 Lisa said: ‘I accepted that my daughter wanted to be a boy straight away. Josh who was then called Sarah left us a note saying that loved us but wanted to be known as Josh from now on’

‘We’ve since changed his bedroom into a graffiti art wall instead of it being purple and girly and got rid of all of his dresses.’

Josh – who has three older sisters – now dresses as a boy for school and is excited to start his hormone treatment.

‘It’s a long waiting list and Josh is already hating the change in his body.

‘He has quite big boobs which is something that embarrasses him and he hates having boobs.

‘In two years he will be eligible to have a mastectomy if he wants to and if he can’t have it on the NHS, I will pay for it myself.

‘Josh has always been more into boys toys than girls and even when I was pregnant I felt different with him than my other girls.

‘As long as Josh is happy being male then we’re happy to support him every step of the way.’

Despite looking like a boy after shaving his head and wearing male clothes, Josh has been subjected to some cruel taunts.

Lisa added: ‘He was told on the bus by a group of kids that he looked like a girl still which upset him but he soon gets over it.

‘It makes him over the moon when someone refers to him as ‘young lad’ or ‘sir’ when we’re eating out.

‘Also, now that he looks male, he’s able to use the men’s toilets without being questioned.

‘At the moment Josh seems keen to have surgery to lose his feminine features but as he’s only young we will cross that bridge when we come to it.

‘It’s strange because he already looks like he has an Adams apple.

‘I hope other parents read our story and realise that despite it being a shock when you’re child says they’re transgender that the most important thing is to support them.’

Josh said: ‘I feel much happier now everyone knows that I’m transgender.

‘I will be looking at getting a binder to shrink my chest and to start hormones in the next few months.’