An author and blogger has revealed how she’s now a happier and better mother after giving up her nightly wine habit that was taking over her life.

Lauren Derrett, 44, a mother-of-four from Essex started using wine to relax after the birth of her third child and found herself consuming up to a bottle a night on average and more on weekends.

She felt reassured because so many fellow mothers on social media were also enjoying ‘wine o’clock’ as a way to relax, but her children pricked her conscience by asking why she was always drinking.

After quitting alcohol at the end of December 2017, she’s been sober for more than 100 days and wants to encourage others who are concerned about their drinking to make a change.

She’s now done over 100 days sober, and although she’s had tough moments she says it’s brought her inner peace and taken away her guilt.

‘I feel more involved in family time rather than spending all my time wishing the time away so that I could get to “wine o’clock” she told Femail.

‘I have more patience, more energy, and more libido. I’ve also noticed how my first response to life is positive now, I’m actually enjoying life rather than mentally beating myself up every day for drinking or living only for the 4pm pop of a cork.’

Lauren Derrett, 44, a mother-of-four from Essex started using wine to relax after the birth of her third child

Lauren used to drink socially at family occasions and on the odd night out with friends, but never at home.

Things escalated, however, after having her third baby in early 2004,

‘I think it was because I was struggling so much with motherhood after the third that I was looking for a release,’ she explained.

After a break while pregnant with her fourth baby, she started drinking ‘an unhealthy amount a day’ again. 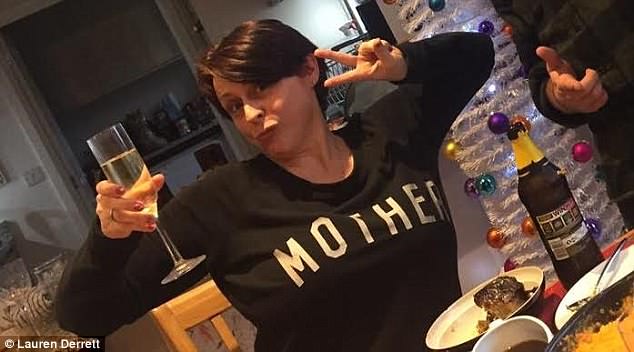 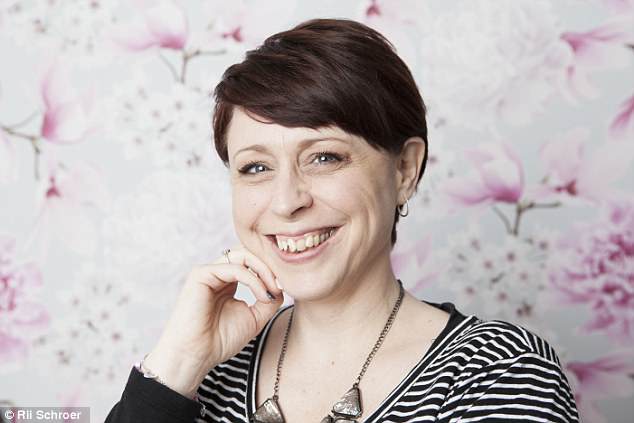 The mother-of-four said her husband and children questioned why she was always drinking, but she brushed off their concerns

‘Having a drink in the evening would initially relax me,’ she said. ‘But a couple of glasses in I would feel disappointment in myself and make the promise that I would stop the following day.

‘I also had this almost ritualistic thing I’d do – I knew my cut off point was around 2/3rds of a bottle of wine. Any more than that and I knew it would make me feel rubbish the following day.

‘So I would feel that I had to drink to that point before I went to bed, even on nights when I had enough at one glass I would carry on drinking until I got to 2/3rds in.

‘Thinking back, the day after, with only 1/3rd in the bottle it meant that I would have to buy another bottle that day so that I had enough for that night, almost like leaving myself with an excuse to buy more.’ 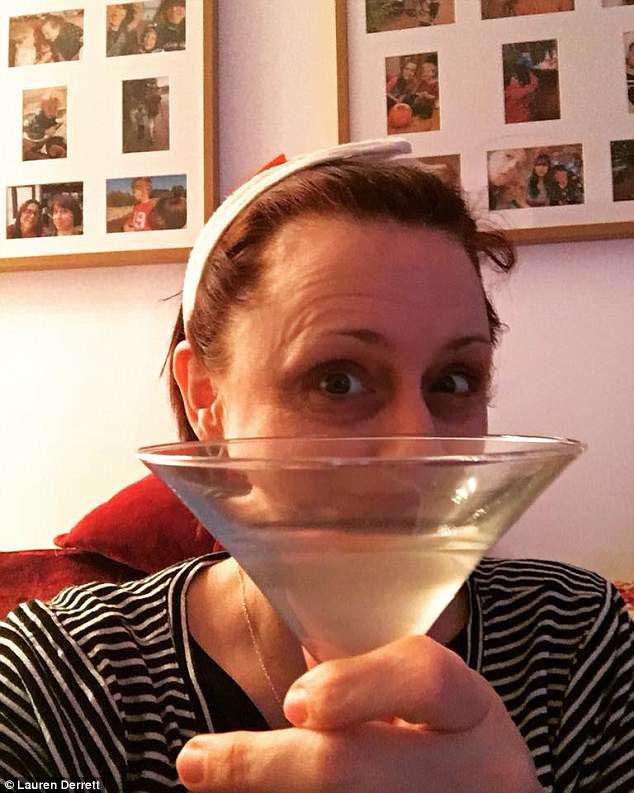 Lauren sipping on a non alcoholic cocktail. She turned to sobriety accounts on social media and a book by a fellow blogger about her own experience of giving up drinking

Lauren sought reassurance from fellow mothers on social media who were using the same method of relaxing after a long day with their children.

‘Every #winetime #wineoclock made me feel part of something and almost gave me permission to carry on,’ she explained.

‘So many people posting photos of their gin, wine or prosecco told me that it was the natural order of things.

‘It told me I was just behaving the way everyone else was, it meant I didn’t have to question my behaviour, even though I knew what I was doing wasn’t healthy

‘The internal battle was strong, guilt was screaming at me daily, the guilt of what I was forcing my body to go through day after day, knowing that I was making its job so much harder and knowing that vital repair work wasn’t getting done as it had to spend every night detoxing my liver. 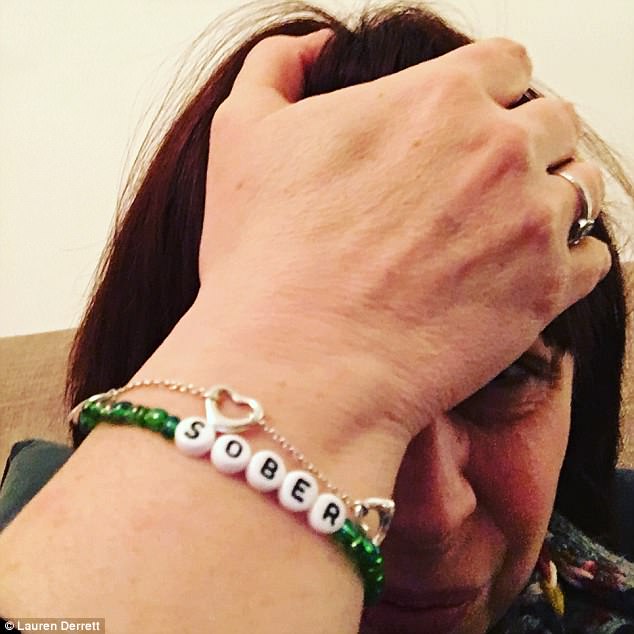 I was exhausted all the time and I knew that was down to my body working overtime and the knock-on effect of my exhaustion meant less patience with my family, low libido, feelings of negativity.

‘I can’t help thinking that the negativity could have been my brain subconsciously giving me an “excuse’ to drink”. I think it creates a vicious cycle of needing to drink to drown out the negativity and the alcohol creating more negativity.’

Lauren’s loved ones were also worried, especially her husband who does not drink himself.

‘He used to tell me that he was worried when I was drinking from a safety point of view and he was also concerned from a health perspective. 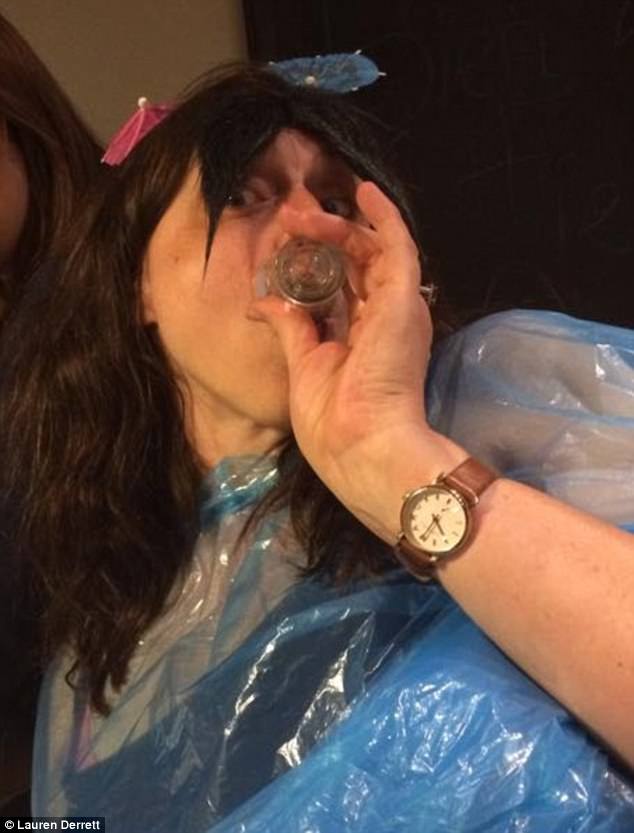 ‘But I think he knew that whatever he said I wasn’t really listening, I was too busy pouring wine.

‘It was just a running joke with us all really “here she goes again”. Sometimes my children would challenge me if I poured another glass: “are you having more?”.

‘But my ‘need/want’ for the wine would override anything anyone said.

‘This makes me sad now, that I put the wine before their concerns.’

In December 2017, after drinking heavily over Christmas, Lauren decided she would do Dry January.

Giving something up can always feel scary. Who are you without it? What if nobody will like you if you give up? What will you do if you’re not doing it?

It’s also a physical need. Detox can be tough and the first feel of it can send you right back. But what if giving up gives you stuff? What if by reframing it from ‘giving up’ to ‘enhancing your life’,

What if you could trade one thing for another rather than give up ?

It’s basic but writing a pro and cons list and start from there. Be brutally honest (even if it’s just with yourself).

Are you REALLY happy with the way you use alcohol? How would it feel to not have that dependency on a substance that is ultimately chipping away at your health?

But, like anything, you have to really want to do it, I tried to give up so many times before but obviously, the time wasn’t right until now.

A few days beforehand she went for a family meal to celebrate her niece’s 21st birthday and overindulged.

‘At the meal, I gave a speech and was my usual loud, fun self but the next morning I woke with the “did I make an idiot out of myself? Did I take over the whole event with my loudness?” post-drink regret.

‘I also felt awful for two days with a hangover. I felt embarrassed that at 44 I was still getting so badly hungover.

‘It also played heavily on me that the times I was hungover in bed was time I wasn’t spending with my kids and I felt ashamed that they also had to witness it.

‘That was the hangover that made me think, “I need to stop doing this, it’s not fair on my body, my husband or my kids”.’

Lauren decided to go cold turkey and read a  book written by a mummy blogger, about sobriety to help her along the way.

‘I started following “sober” accounts on social media and in moments of weakness, I would go back to the book and immerse myself in the sober accounts.

‘I also made myself a bracelet that had the word SOBER on it and I used it as a reminder to the fact that I was now sober and I was OK.’

Since giving up drinking Lauren has seen things in a whole new lift, and believes casual everyday drinking is at ‘epidemic’ proportions among mothers.

‘It seems to be just what you do to survive, blogs that are aimed at mums often share their drinking, almost giving other mothers permission to do it and even sending the message to mothers that it’s a cool thing to do.

‘It feels as though there are lots of mothers trying to surround themselves with other mothers who drink daily so that they don’t have to question their own drinking habits.

‘This isn’t a case of me judging other mothers, I was the mother who also fell into this habit but I do think it’s a point worth getting curious about?

‘Are we drinking to fit in? Have we equated motherhood with drinking? Are you even a mum if you don’t enter into “mums wine time”?