A brave mother saved her three-year-old daughter from drowning in the Texas floods – but sacrificed her own life in the process.

The tragedy happened when the mother, 41, got stuck in the floods in Beaumont as she tried to flee in her car.

Overwhelmed by the flooding roadway, the woman pulled into a parking lot along Interstate 10 around 3.30pm yesterday.

However the strong current swept the mother and child into a canal around half a mile from their vehicle.

A brave woman saved her three-year-old daughter’s life after being overwhelmbed by flood waters on Interstate 10, which is closed due to floodwaters from Tropical Storm Harvey

The mother fought desperately to keep her child’s head out of the water.

Officer Carol Riley, a spokeswoman for the Beaumont Police Department, said the unidentified mother was found by rescuers floating in the canal with her daughter still clinging to her.

‘They were in the water for quite some time. The mother did the best she could to keep her child up over the water.

‘The baby also had a backpack that was helping her float on her back and she was holding on to her mom,’ she added. 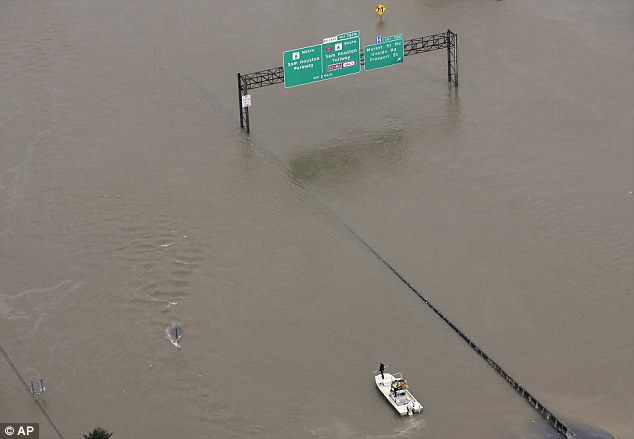 When police and fire service rescuers reached them, they found the mother unresponsive, while the child suffered from hypothermia.

The mother was pronounced dead shortly after they reached an ambulance.

The child is in stable condition, where she will be released into the care of family members later today.

Authorities and family members have reported at least 18 deaths from Harvey, while law enforcement agencies said more than 13,000 people have been rescued in the Houston area and surrounding parts of Southeast Texas. 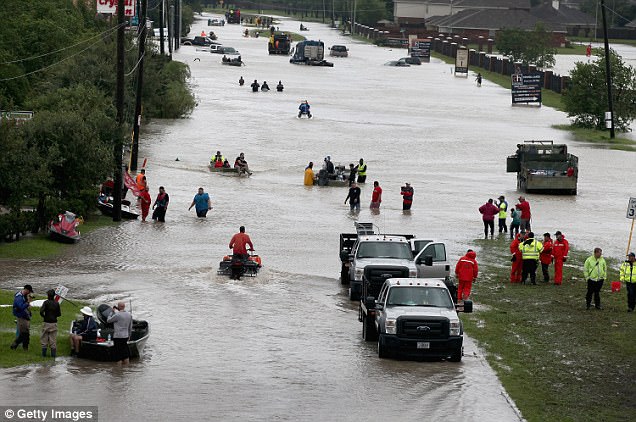 A 64-year-old man was found dead and buried under a foot of debris in a Houston clock repair shop on Tuesday.

Neighboring Louisiana is set to bear the brunt of the tropical storm’s massive downpours today, with flash flood warnings in place across the entire state.

Harvey has drawn comparisons with Hurricane Katrina, which devastated New Orleans 12 years ago, killing 1,800 people and causing an estimated $108 billion in damage.