This is the amazing moment a mother saves her young son from being crushed by a truck after the pair are knocked from their motorcycle.

Video footage filmed in Goi, Nam Dinh, Vietnam, shows three people driving along a road when their bike is clipped by a silver car.

The mother and child, who is wearing a pale pink coat, are knocked of the back and the youngster rolls into the path of an oncoming HGV.

The motorcycle is clipped by a silver car while driving in Goi, Nam Dinh, Vietnam, knocking the mother and child from the back of their motorcycle

However the quick thinking mother instinctively reaches out for her child and pulls him back towards her.

She pulls at her son’s coat arm first and then reaches for his hood before rolling onto her back, making sure the child is furthest away from the lorry’s wheels.

The man driving their motorcycle doesn’t seem to notice that he’s lost two of his passengers until the danger of the lorry is over.

He turns around and sees them on the floor and then quickly heads for the side of the road so he can pull over. 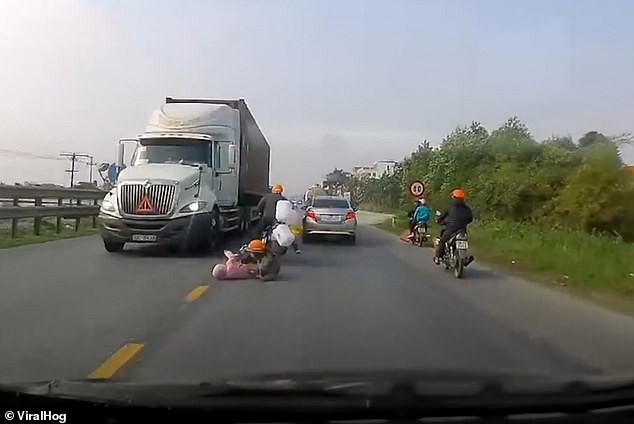 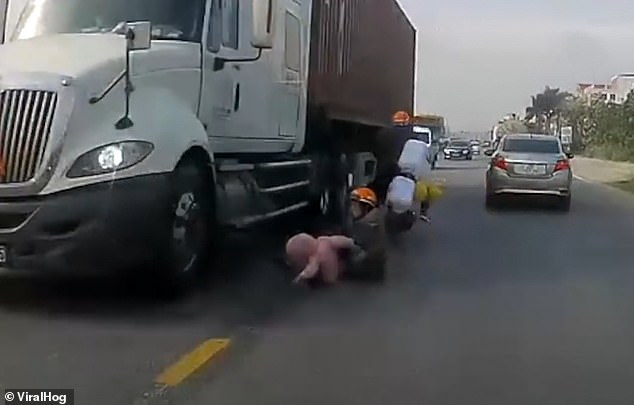 The mother grabs her son’s coat, pulling him back towards her and away from the lorry’s wheel

Both of the adults on the bike are wearing orange helmets but it is not clear if the child had one on.

People who watched the video online said it was a ‘miracle’ that the child was not hurt and praised the mother’s quick reaction.

One person said ‘what a miracle’ while some said the clip was ‘incredible’ and that the mother had ‘ninja moves’.

Another person commented on the video simply saying: ‘Mothers are amazing.’