A mother has shared a heartbreaking image of her son the week he twice threatened to kill himself after allegedly being tormented by ‘school bullies’.

Emma Young posted the photograph showing the youngster with his head in his hands along with a plea for others to be ‘understanding’ and ‘tolerant’.

She says that he had become depressed and threatened to take his own life after allegedly being physically and verbally bullied for months at Fleetwood High School in Lancashire.

In an emotional message, Emma claims that bullies pushed ‘Robert’, who suffers with Asperger syndrome, into a wall in the playground where his glasses smashed, pelted him with sticks and attacked him at a bus stop.

Even when his mum tried to reach out to the parents of the bullies, Emma claims they refused to help and blocked her on social media.

After other students reported that Robert had told them he was suicidal, Emma claims she rushed her son to A&E to be assessed by the mental health team.

The mum-of-two claims she searched her house and got rid of anything that he could use to commit suicide in the hopes of preventing him from making an attempt on his life.

He was assessed again just two weeks later after a second incident at the school – and Emma claims she opted to home school him instead on December 3 2018 after fearing he was no longer safe there.

Now the 31-year-old mum has shared a photograph of Robert with his head in his hands during his darkest hour in a bid to warn others of the cruel effect that bullying has. 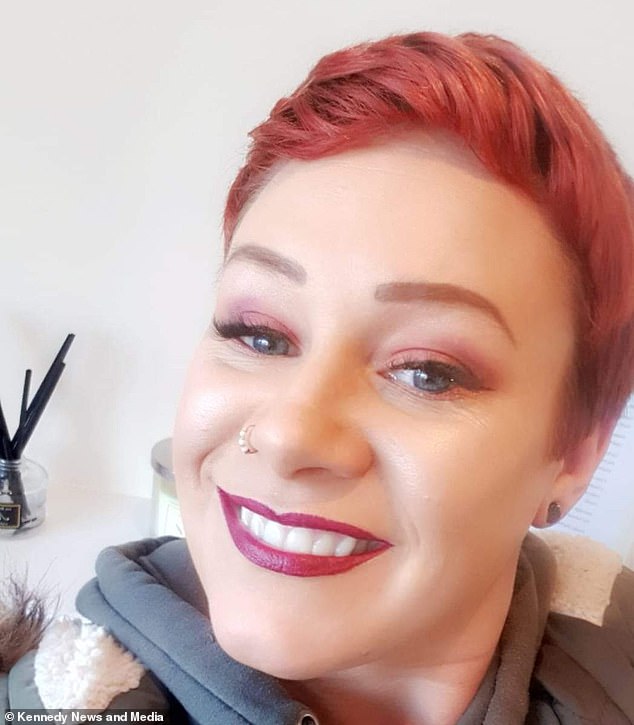 Emma Young, from Fleetwood, Lancashire, claims she searched her house and got rid of anything that he could use to commit suicide in the hopes of preventing him from making an attempt on his life

The post went viral and amassed more than 86,000 likes, comments and shares.

Emma, from Fleetwood, in Lancashire, said: ‘[The photo] was [taken] in the hospital room as we were waiting to see a doctor [the second time we were at hospital].

‘I don’t know why I took the picture, it’s not something I would usually do.. I felt like I needed to take it.

‘That was just him at the bottom of the barrel. It was complete and utter despair at that point.

‘That was when he was saying I can’t take this any more and had his head in his hands.

‘Even on non-uniform days he’ll still wear his uniform because he says ‘somebody has to represent the school and show it respect’. That’s how much he loves it.

‘To have gone from that being in absolute despair was horrible. It affected my mental health as well to see him like that. I went into a really low state. 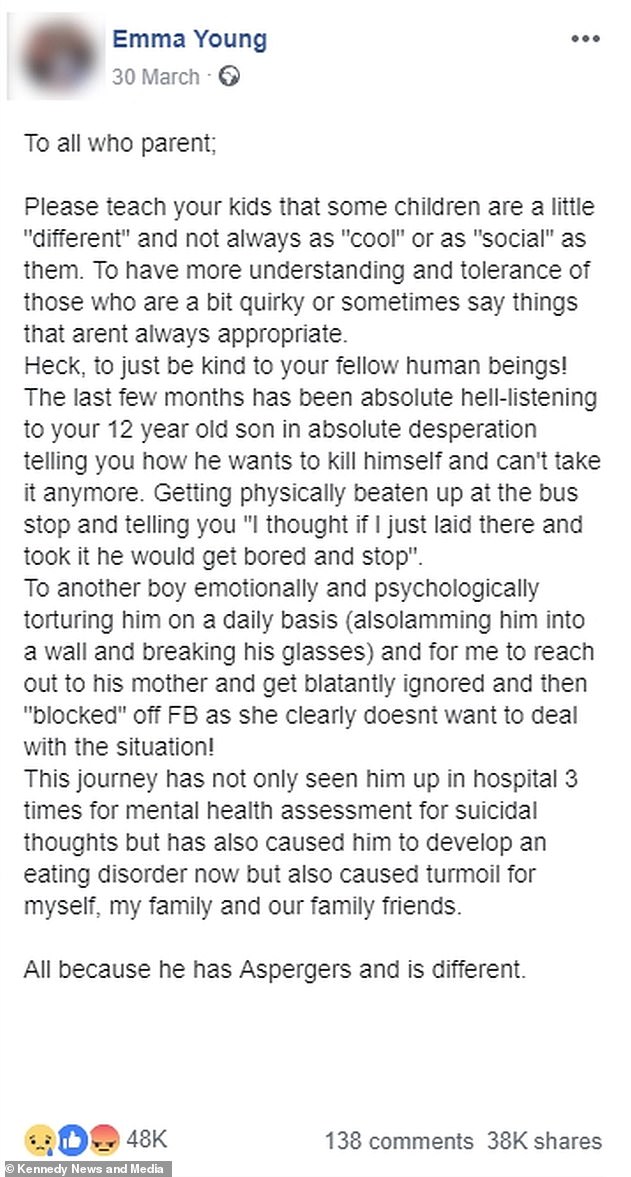 The emotional Facebook post where Emma detailed the suffering her son has been through, claiming that when she attempted to speak to the parents of alleged bullies she was ignored and blocked on social media

‘He kept it quiet that he had been getting a lot of verbal abuse from a group of boys, with one boy in particular.

‘The verbal abuse quickly turned into physical abuse. He was pushed into a wall and his glasses got broken.

‘There was another incident where he was battered at the bus stop, physically attacked. It was more the name calling that was the most for him to deal with.

‘The bullying was too much for him – [when I took the picture] he was literally grabbing his head and shaking it and saying ‘I can’t take this anymore’. It was awful.

‘There were sticks and things thrown at him, he was pushed into the wall, his glasses got broken. A lot of it was verbal, emotional and psychological trauma.

‘None of what they were saying was true, and he knew it wasn’t true, but it still hurt him.

‘They were making comments about our home being full of dog poo. We live on a beautiful estate in a brand new home.

‘They were calling him fat. It’s bizarre – there’s more fat on an Argos pen.. He’s like a little twig. For his size he’s tiny.

‘I thought he can’t continue there, because he isn’t safe. As a parent you often wonder if you’re doing the right thing, but that was the only thing I could think of to keep him safe.’

After being home schooled for two months, Robert is now a pupil at another school and is already much happier.

After reaching out to the parents of the bullies online, Emma claims that she was ignored and blocked.

But the mum-of-two hit back in a status, which has since gone viral with more than 86,000 likes, comments and shares.

Emma wrote: ‘Please teach your kids that some children are a little ‘different’ and not always as ‘cool’ or as ‘social’ as them.

‘To have more understanding and tolerance of those who are a bit quirky or sometimes say things that aren’t always appropriate. Heck, to just be kind to your fellow human beings.

‘The last few months has been absolute hell – listening to your 12-year-old son in absolute desperation telling you how he wants to kill himself and can’t take it anymore.

‘Getting physically beaten up at the bus stop and telling you ‘I thought if I just laid there and took it he would get bored and stop’.

‘All because he has Asperger’s and is different.’

One social media user responded to her post and wrote: ‘Sadly it’s not just kids it’s adults too, it’s very, very sad. Robert has got a fantastic mother, keep fighting for him.’

While another wrote: ‘This is one strong mama standing up for her baba. I have so much love and respect for you.’

Emma, who is a wellbeing officer, Reiki master and spiritual therapist, said: ‘The status has had a knock-on effect with everybody. I didn’t expect the post to go viral at all.

‘I couldn’t believe how quickly it had spread. It’s good – it’s spreading awareness and getting people to realise that this sort of thing can’t continue.

‘It seems to be so prevalent now. It’s very heartbreaking to say the least.

‘[Reading the comments to Robert has] really, really lifted him. I’ve been crying because I’ve been so overwhelmed by people’s beautifully kind words.

‘Grown adults with Asperger’s have said they have had this throughout their lives and offering advice. I’ve been blown away by it.’

Richard Barnes, headteacher at Fleetwood High School, said: ‘I can’t comment on individual cases, however, the welfare of all our pupils is our utmost priority.

‘Our school does have a robust policy in place for dealing with issues, including bullying. Any incidents of bullying that are reported to us are dealt with immediately and investigated thoroughly.

‘This is confirmed in our latest Ofsted inspection that took place in January 2019. This report clearly points out that incidents of bullying are rare in our school and that when they do occur, they are dealt with quickly and well.’

Ofsted’s official Inspection Report in January 2019 said: ‘Pupils are adamant that bullying is rare and that leaders regularly seek pupils’ opinions on bullying, and they promote the school’s anti-bullying strategy methodically.

‘Pupils say that they understand different types of bullying and that, on the rare occasions that bullying does occur, staff deal with it quickly and well. Arrangements for safeguarding are effective.’

The boy’s name has been changed on his mother’s request to protect his identity.