Mother shares touching moment her baby was born in lockdown

A mother has shared her touching story of giving birth during the lockdown.

Ashley Faldmo, 29, from Texas, went viral with a poignant pictures she posted, which showed her nursing her newborn baby on the floor of her home while surrounded by first responders in masks.

Taking to her Instagram account, the mother-of-three explained she had gone into labor early, and was alone with her two other children when her waters broke – having told her husband Chase, 29, who is a chiropractor, that he should go to work that morning.

Revealing that firemen, who were seen wearing masks in the picture, from the Coppell Fire Department came immediately before her husband arrived, she admitted that her ‘respect for first responders in a traumatic situation is incredible’.

Ashley Faldmo, from Texas, went viral with a poignant pictures she posted, showing her nursing her newborn baby surrounded by first responders in masks

The photo shows Ashley sitting on the floor at home holding her newborn baby girl, Collins Grace Faldmo, surrounded by firemen in masks and gowns.

Explaining what happened, she wrote: ‘I woke to what I considered “only cramping” and insisted Chase leave for work since my water hadn’t broken (and had hours before any signs of labor with the previous two).

‘An hour and a half later I called him back telling him to get home immediately since things were becoming more intense.

‘While on the phone, my water broke and I told him to call 911 because contractions immediately escalated.’ 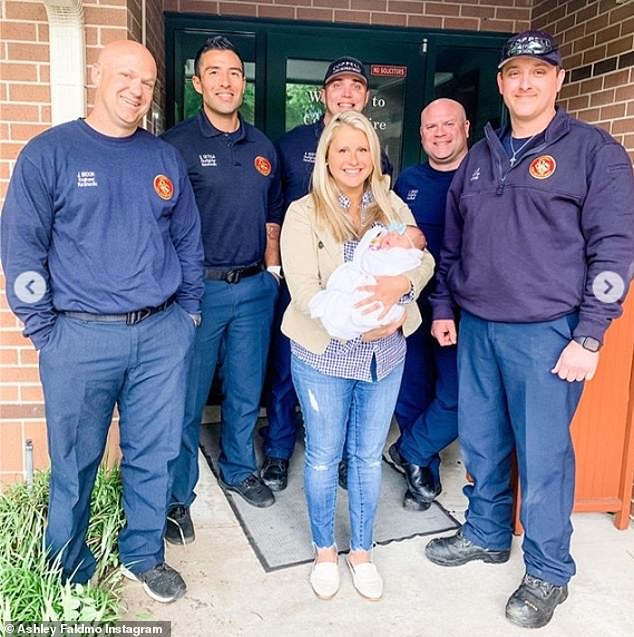 She revealed that the Coppell Fire Department came immediately before her husband Chase arrived, adding that her ‘respect for first responders in a traumatic situation is incredible’

Revealing how she was alone with the children who let the first responders in, she continued: ‘I then dropped the phone and fell to the floor on hands and knees while Amanda jumped on my back thinking, ‘mom’s playing horse!’

‘Meanwhile, Reagan laughed hysterically, telling Amanda, ‘she’s calling 911!’ Seconds later we heard sirens (we live next door to the station) and I told Reagan to open the garage, since our top lock was on the front door.

‘Sweet Reagan immediately grabbed my keys in the drawer, jumped in the car and opened the garage to wave everyone inside from the driveway.

‘My dear friend, Julie ran inside first, whom I texted before dropping the phone to come get the girls, and wrangled them upstairs.

‘Firemen then rushed in, asked if this was my first, and when I responded third, said, this baby’s coming now.’

And luckily her husband came just in time to witness the birth. 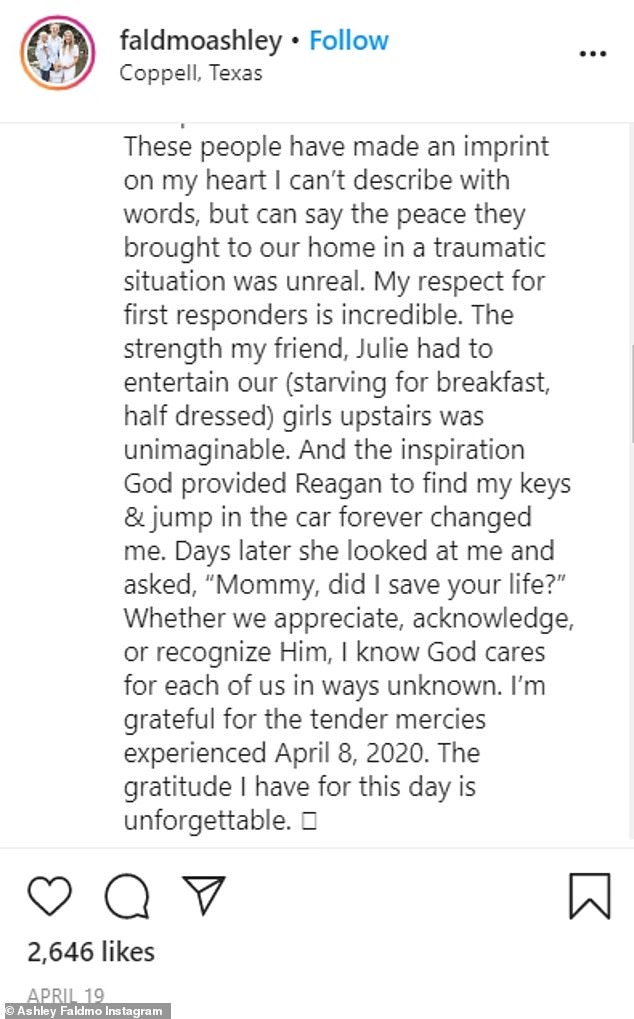 The photo shows Ashley sitting on the floor at home holding her newborn baby girl, Collins Grace Faldmo, surrounded by firemen in masks and gown, racking up thousands of likes 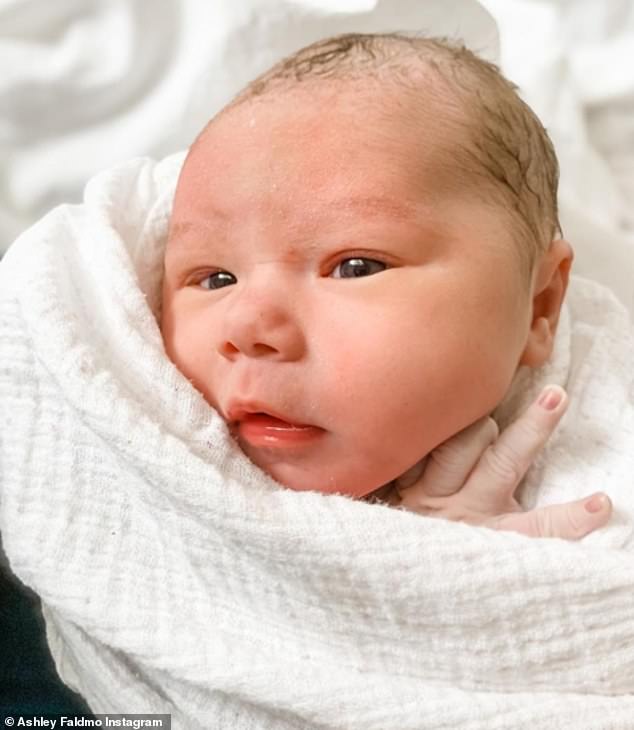 Ashley wrote: ‘Collins Grace Faldmo made her appearance ten minutes after @coppellfire & @doctorchasedc walked through our front door this morning for an unexpected home birth. Everyone is happy, healthy and beyond grateful for an incredible birth team’

Ashley continued: ”Five minutes later Chase ran through the door cheering me on like the ultimate cheerleader he is. Seven minutes and four pushes later Collins was born.’

The new mother praised the reaction of the medical services amid the pandemic, writing: ‘These people have made an imprint on my heart I can’t describe with words, but can say the peace they brought to our home in a traumatic situation was unreal.

‘My respect for first responders is incredible. The strength my friend, Julie had to entertain our (starving for breakfast, half dressed) girls upstairs was unimaginable.

‘And the inspiration God provided Reagan to find my keys & jump in the car forever changed me. Days later she looked at me and asked, ‘Mommy, did I save your life?’;

She concluded: ‘Whether we appreciate, acknowledge, or recognize Him, I know God cares for each of us in ways unknown. I’m grateful for the tender mercies experienced April 8, 2020. The gratitude I have for this day is unforgettable.’ 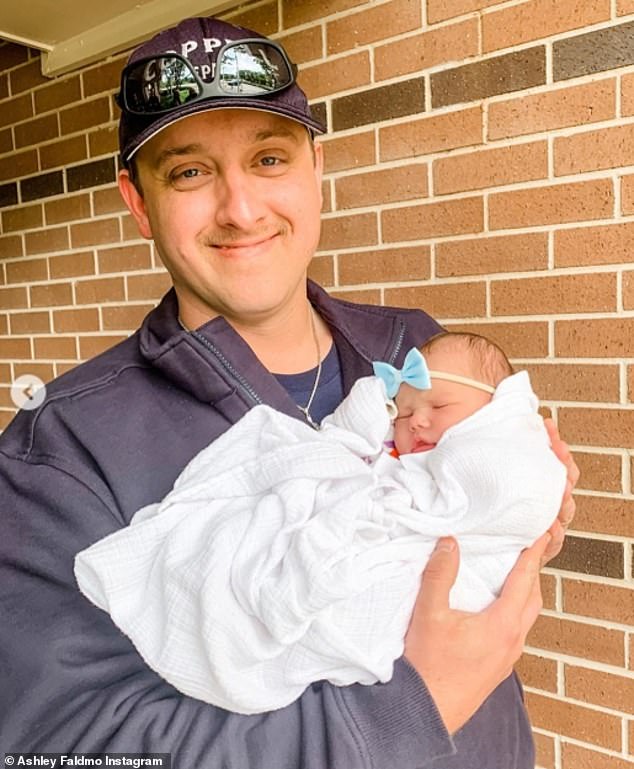 Ashley praised the fire department, with a picture showing a fireman showing the newborn after her unexpected early appearance