Mother sparks debate after asking if her son, 18, should pay her rent

A mother has sparked a fierce debate online after asking whether she should make her 18-year-old son pay rent now he is working.

The anonymous woman, thought to be UK-based, took to parenting forum Mumsnet to garner opinions on her dilemma, revealing she would like to continue supporting the teenager, but it’s a ‘struggle’.

Her post sparked a diverse range of views, from people who say they would never charge one of their children rent to live at home to others who charge their grown-up kids for everything – even if they are unemployed.

In her post, the woman wrote: ‘My 18 year old son finished college this year and is now working at a local hotel. It was a part time job but is now supposed to be full time as he won’t be going to higher education – so this is it, he’s now in the workforce and is an adult.

‘At home there is myself, my husband and a 16 year old in further education and we are finding money is really tight at the moment. At what point do we stop paying for our son? I don’t mean food and household stuff, I mean his haircuts, clothes, prescriptions etc? He is working and wants to be treated as an adult, I think he should pay for anything that’s for him. 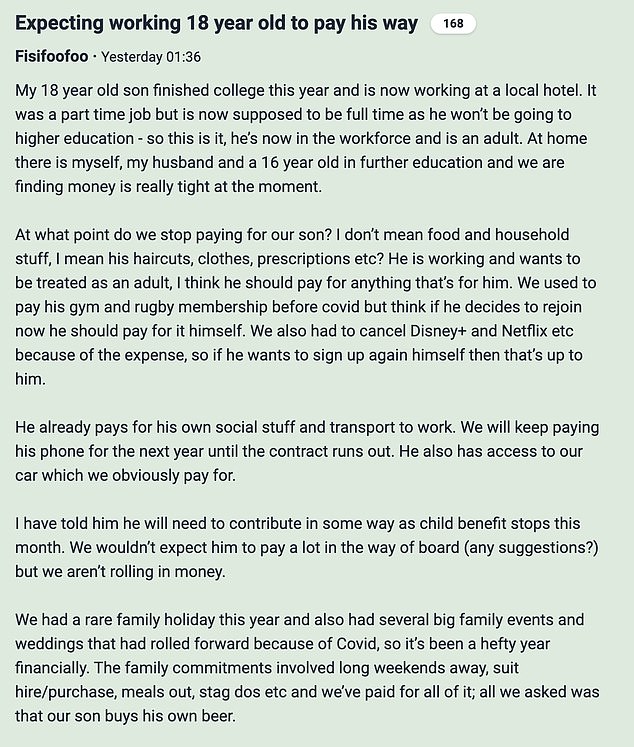 ‘We used to pay his gym and rugby membership before covid but think if he decides to rejoin now he should pay for it himself. We also had to cancel Disney+ and Netflix etc because of the expense, so if he wants to sign up again himself then that’s up to him.

‘He already pays for his own social stuff and transport to work. We will keep paying his phone for the next year until the contract runs out. He also has access to our car which we obviously pay for.’

She continued: ‘I have told him he will need to contribute in some way as child benefit stops this month. We wouldn’t expect him to pay a lot in the way of board (any suggestions?) but we aren’t rolling in money.

‘We had a rare family holiday this year and also had several big family events and weddings that had rolled forward because of Covid, so it’s been a hefty year financially. The family commitments involved long weekends away, suit hire/purchase, meals out, stag dos etc and we’ve paid for all of it; all we asked was that our son buys his own beer.’

The woman concluded her post by asking whether people thought she was being unreasonable by ‘asking for a contribution to board now he’s working and left education?’

She wrote: ‘How much would people suggest we ask for? When should we stop paying for all the stuff that’s just for him likes clothes etc? Obviously we will still feed him! I would really love to just keep supporting him but it’s a struggle. Thanks for taking the time to read.’

Many Mumsnetters felt the son could pay for his own expenses, then depending on his income, it may be fair to charge him a nominal fee for rent

The post fiercely split opinion, with people taking vastly different positions. While some said they would never charge a child rent to live at home, others said they made their children contribute to all costs – including food.

Many felt that the young man should be responsible for his own costs like clothes and socialising, with some adding he could pay a nominal fee for rent.

One wrote: ‘ I could do free board but charge him a monthly contribution for food etc.

‘Anything else is up to him – clothes, haircuts, tattoes (you’d be amazed how much brain dead teenagers will oay for them).’

Another added: ‘He should be paying for all his own personal stuff including toiletries, clothes, haircuts, sport, phone etc. I’d also be asking for a small contribution as board.’

And a third agreed, writing: ‘As others have said, he should pay for his clubs, haircuts, clothes etc and pay you some rent. If you want, transfer the phone bill to him at a later point.’

Some posters took a harder line – saying that not only should teenagers pay rent, but suggesting that parents who don’t charge it risk setting their children up for failure

Others took a much harder line, with one saying: ‘Soon as I started working I paid for everything ‘non house related’ for myself – and paid my parents a super nominal amount as ‘rent’ a month that was for bills etc. That said I was initially on a year out from uni at the age of 18 so unbeknownst to me they put that aside to give me back once I actually started studying.

‘However if your son is properly done with FT education and working then why should you fund his lifestyle choices? I’d not be paying for anything and I’d be asking him for rent/lodgings…….’

Another added: ‘He chose to enter the workforce instead of continuing his education. That should mean that he starts taking care of himself financially. That really should include rent and groceries as well. You aren’t doing him any favors letting him feel like his pay goes further than it actually will.’

And a third went further, saying her children pay her for everything, including food, even if they aren’t working. She wrote: ‘My adult son has to pay his way whether he’s working or not. He pays for his food and drink and third of electricity or gas, no council tax as that stays the same if he’s home or not.’ 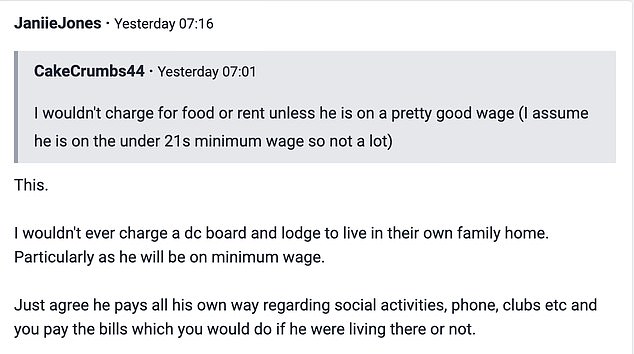 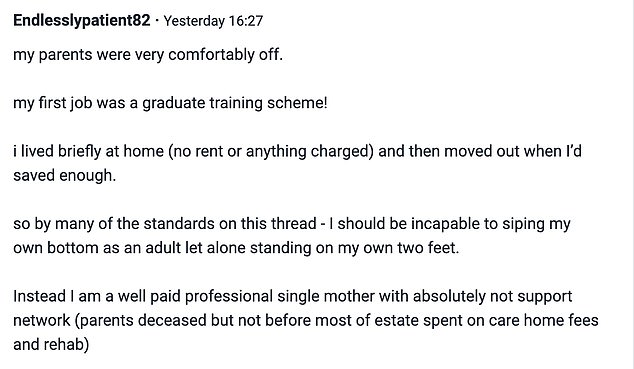 Some posters took a softer approach, with one saying they would never charge a child rent to love at home

However others noted that they would not want to charge their own children rent, with some pointing that the teenager will not even be earning full minimum wage, and that would factor into their decision.

One said they would ‘never’ make their kids pay to live at home, writing: ‘I wouldn’t ever charge a dc board and lodge to live in their own family home. Particularly as he will be on minimum wage…Just agree he pays all his own way regarding social activities, phone, clubs etc and you pay the bills which you would do if he were living there or not.’

Meanwhile, another said: ‘I wouldn’t charge for food or rent unless he is on a pretty good wage (I assume he is on the under 21s minimum wage so not a lot).’

And a third revealed that their parents never charged her rent, writing: ‘my parents were very comfortably off…my first job was a graduate training scheme!

‘i lived briefly at home (no rent or anything charged) and then moved out when I’d saved enough.

‘so by many of the standards on this thread – I should be incapable to siping my own bottom as an adult let alone standing on my own two feet.

‘Instead I am a well paid professional single mother with absolutely not support network (parents deceased but not before most of estate spent on care home fees and rehab).’