A mother who is refusing to buy her teenage children smartphones and wants to limit their internet access has been told she will cause them to go behind her back.

Using the name captainproton, the woman told British parenting site Mumsnet she was scared of exposing her kids to grooming, bullying and pornography.

She questioned the advantages of owning a smart device and suggested it could impact her children’s sleep.

She added: ‘I want my kids to use the internet on a desktop pc in a communal living room. I want them to come home from school and feel whatever crap is happening at school/online they are ignorantly safe from.’

The mother asked other users for their views on giving teenagers gadgets with internet access.

A flood of responses warned the mother that she was setting up the children to sneak around her restrictions. 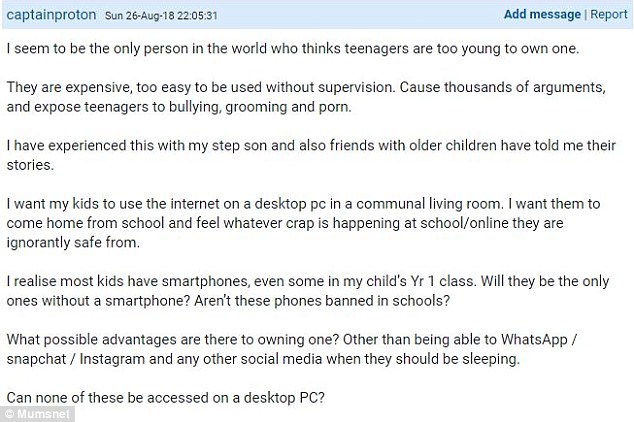 The mother outlined in her post that she feared her teens being exposed to grooming, bullying and pornography in addition to having their sleep disturbed by using social media

Parents who claimed the mother should teach her children about using the internet combined with having parenting controls on devices argued that being stricter would lead to the teenagers choosing to sneakily access the internet.

One person said: ‘You sound a little out of touch to be honest. Teens really should have access to a phone, for safety at least.

‘Obviously there is a risk of abuse ie selfies, sexting, cyber bullying and all the social media worries but that’s always going to be there. Surely the answer is developing sensible attitudes and honesty?

In agreement, another wrote: ‘Yeah, your kids will go behind your back and get one anyway with a cheap payg sim and then you’ll have no control whatsoever and no knowledge.

‘You’re much better off getting them one, setting it up with parental controls, explaining the rule that you be allowed access to it and teaching them how to navigate the internet as safely as possible.’

Others supported the mother and shared stories of how they had struggled with finding a balance in how much internet access to give their own children.

Speaking under the handle ‘Grumpyoldblonde’, one parent shared the difficulty of seeing how gadgets had impacted their teenage daughter first hand.

She said: ‘Actually, I admire you. My teen has every gadget, is aware of safety and all her friends are the same. However, I see first hand the effect on her mental health and her peers.

‘The constant seeking approval, the shopping hauls and selfies. The comparison to others. It’s too much to go into here things are not good. There’s no escape once they have social media.

Another wrote: ‘You are not being unreasonable. I grew up with smart phones. My children won’t be having unsupervised internet access until they leave home. Too much potential to screw up their lives. ‘ 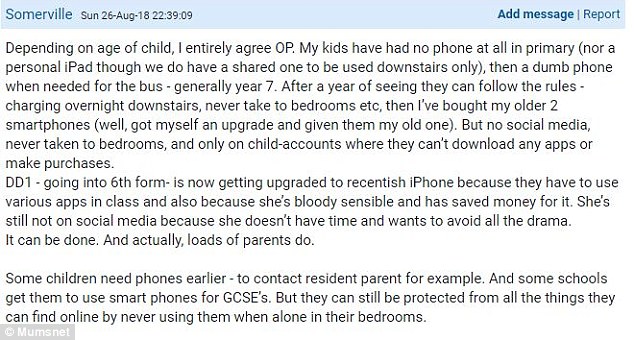 The majority of parents argued the internet is a necessary part of life and it’s ‘idealistic’ to try to keep children away from it.

One person said: ‘Just being completely honest here this is the wrong way to go about this.

‘Proper education and open discussion about the dangers of the internet is alot better than wrapping them in cotton wool.

What age can you legally buy a smartphone in the UK?

‘Teenagers should have the freedom to use the internet without being watched 24/7. Sadly it’s the world we live in where internet and technology is a huge part of it.’

Another wrote: ‘Cars are dangerous but you probably drive them around in them and walk along pavements with them. You supervise and teach them how to cross roads safely. You monitor them until they can clearly be trusted.

‘You then let them leave the house alone and cross roads, first just quiet ones but then bigger and more complicated ones.

‘The internet is the same thing. Yes, a desktop in the living room is right for primary school kids. But you need to let your early teens cross bigger and more complicated roads.

‘You need to monitor and guide but how will they learn to cope with social media or anything else if you don’t let them? Make it an ongoing conversation about safety, social pressures, let them give their thoughts too but guide them towards understanding why something online may not be what it seems.

‘And they won’t be ignorantly safe from what is going on social media. There is still real life people and will still be talking about it there.’ 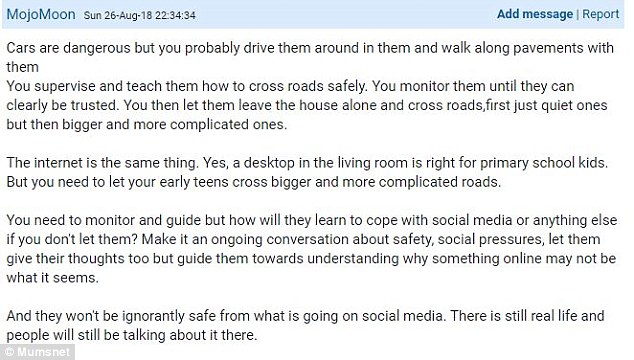