A crafty mother-of-one spent five hours covering her son’s entire bedroom in wrapping paper – and blamed it on his ‘elf on the shelf’.

Having used the ‘elf on the shelf’ to entertain her son during the festive period for three years now, Charlotte Preston, 27, decided she had to step her daily pranks up.

Charlotte Preston, 27, covered her eight-year-old son’s walls, bed and pillow in wrapping paper. She wanted to prove his elves, Noelle and Buddy (above), were tracking his behaviour

Knowing she had to prove to her eight-year-old son, Conrad, that his elves, Noelle and Buddy, are watching to track his behaviour on the lead up to Christmas, Charlotte searched for creative ideas.

Having seen someone who had wrapped their Christmas tree for the same reason, Ms Preston, from Barrowford, Lancashire, decided to step it up a level and wrap up her son’s entire bedroom.

The prank, which took five hours and five rolls of wrapping paper, left Conrad shocked and on his best behaviour for Christmas Day.

Ms Preston, a receptionist, said: ‘I saw a tree covered in wrapping paper that someone had done and blamed on their elf on the shelf, so I knew I had to give it a go myself. 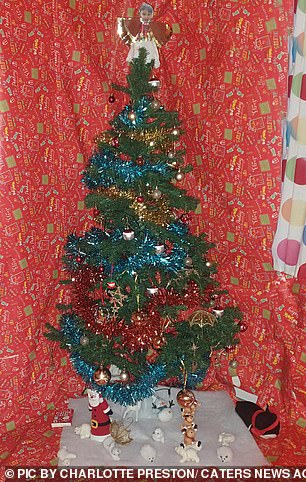 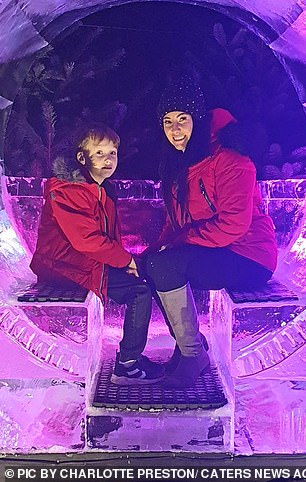 The receptionist (right) has used ‘elf on the shelf’ to entertain her son, Conrad, for three years over the festive period. The prank cost a total of £7 and used up five rolls of wrapping paper 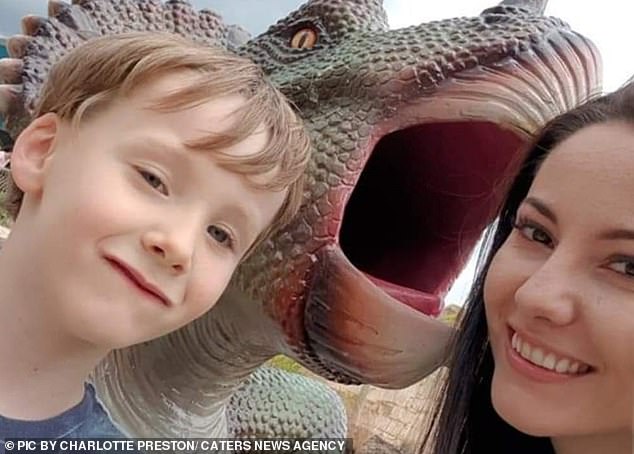 Ms Preston said she has ‘certainly outdone’ herself in comparison to festive pranks in previous years, adding it was ‘definitely the most extreme’ one yet

‘Because Conrad is currently having his bedroom decorated, a lot of the furniture was already out of the way, so myself and my brother decided to wrap it up.

‘It took us a total of five hours, one broken tape dispenser and cost £7 due to us using five rolls of wrapping paper.

‘I have definitely outdone myself in comparison to the other years I have done this.

‘It was definitely the most extreme!’