A cruel mother in India tied up her five-year-old daughter and left her on the roof to burn in scorching Delhi heat as punishment for not completing her homework.

Disturbing video shows the girl kicking and screaming as she tries to free herself while the painfully hot 43C (109.4F) sun of India’s capital Delhi beats down on her.

A neighbour recorded the footage in the north east of Delhi, in Khajury Khas on 2 June at around 2pm in the afternoon.

And after the clip went viral on social media, Delhi Police opened an investigation to identify the child involved.

This week they confirmed they had ‘initiated appropriate action’ against a mother who has been identified by her first name Sapna.

It is understood she has been arrested by police for child cruelty under section 75 of the Juvenile Justice Act. The investigation is ongoing.

Not only is June one of the hottest months in Delhi, it is also one of the hottest periods of the day. The national capital is within an unusually long series of heatwaves, with the maximum temperature going up to 46C (114.8F) in some areas in June.

A cruel mother identified as ‘Sapna’ in Kajury Khas, Delhi, India, tied up her five-year-old girl and left her on the roof to burn in scorching 43C Delhi heat as punishment for not completing her homework (pictured)

NDTV reported that the mother had left her daughter on the roof for five to seven minutes.

It is not yet known whether or not the girl sustained any burns or injuries.

The girl’s father, Raj Kumar, a tailor, was not in the house when the ordeal happened. He told police he had gone to get his bicycle repaired.

His wife was at home with the girl and her 11-year-old brother. 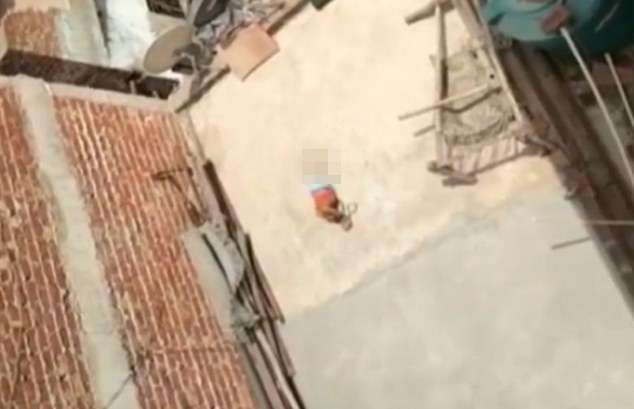 A clip went viral on social media of the girl, who is kicking and screaming as she tries to free herself from the rope as the painfully hot 43C (109.4F) sun of India’s capital Delhi beats down on her

Mr Kumar said that after receiving a call from his father, who saw the child tied up on the terrace, he rushed home: ‘My wife got angry and punished her. When my father told me, I scolded my wife a lot that day but the next day, a relative from our village sent me the video. I scolded my wife.’

The girl’s uncle, named as Sunil, claimed that the child’s mother Sapna ‘beats her kids on every small issue’.

He told news agency ANI: ‘If somebody from the family tries to meddle in between, she says that it is their kids and only she has rights over them.

‘She was not like this before, she has become like this in the past two to three years.’