A mother found out a lump in her breast was cancerous while pregnant, six months after doctors said it was benign.

Michelle McClain, 39, from Winters, California, found the lump after seeing an advert on the internet encouraging women to check their breasts.

Alarmed, she visited her doctor but tests showed she had a fibroadenoma, a non-cancerous lump that’s common in young women.

A gut feeling told Mrs McClain something was seriously wrong, and six months later, the lump had doubled in size.

The business owner was told she did in fact have cancer while 19 weeks pregnant with her fifth child and needed chemotherapy.

And she claims she was informed at the time that the lump may not have even been a fibroadenoma in the first place.

Although safe, Mrs McClain was terrified of what would happen to her unborn baby during chemo and would constantly prod her stomach to check the baby was moving.

Dakota was born healthy but three weeks premature in May 2019. Mrs McClain went on to have more chemotherapy and the mass surgically removed.

Michelle McClain, 39, from Winters, California, pictured with her husband, Mike, found out a lump in her breast was cancerous while pregnant, six months after doctors said it was benign 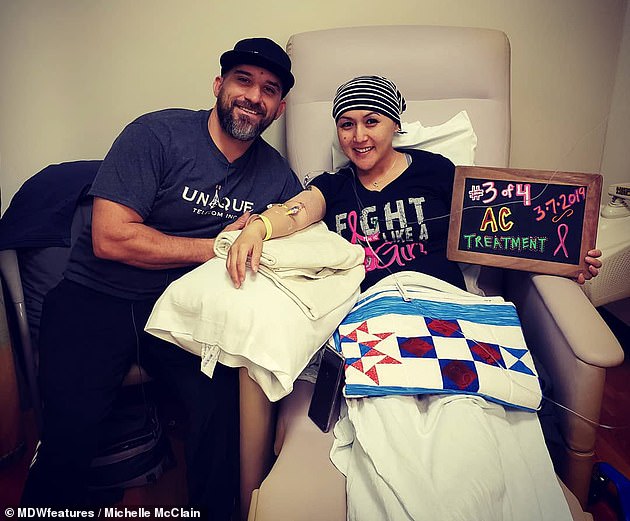 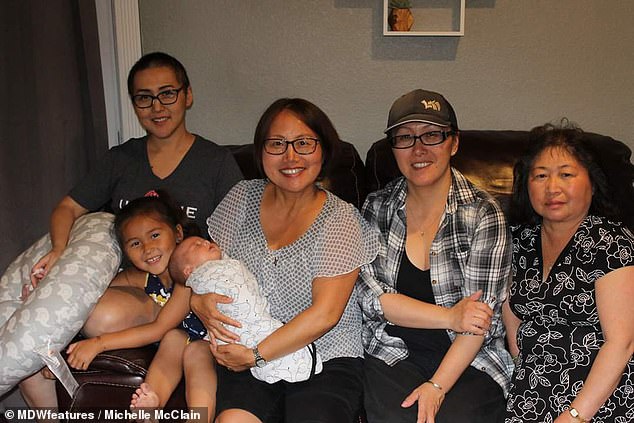 Although safe, Mrs McClain (left) was terrified of what would happen to her unborn baby, Dakota. She was born healthy in May 2019. Pictured, family after the birth

Speaking about the chemotherapy, she said: ‘I didn’t want to lose my baby, I cried every time I thought about it.

‘I was nervous going through chemo. Although my oncologist said it was perfectly safe, I still worried.

‘I would poke at my belly, shake it a little just to feel her move. When she didn’t move for a couple hours I’d do it again.’

In June 2018, Mrs McClain was browsing on the computer when an advert about the importance of checking breasts for changes popped up.

She said: ‘I thought, “what the heck, why not” so, I pressed my right breast and immediately felt a lump. I panicked as I didn’t expect to feel anything.

‘I met with my doctor the following day, a mammogram and ultrasound were ordered immediately. When the results came back, it said I had fibroadenoma.’

Fibroadenomas are solid, noncancerous breast lumps. About 10 per cent of women have one, often without ever knowing, most commonly under the age of 35, according to WedMd.

Over time, a fibroadenoma may grow in size or even shrink and disappear. They may get larger during pregnancy because of surges in the hormone oestrogen.

There is a slight increase in risk of cancer with a ‘complex fibroadenoma’, which has certain characteristics. About 15 per cent of fibroadenomas are complex.

Mrs McClain felt uneasy because her gut was telling her the lump was more serious, but she was told to come back in six months for a follow up.

In December 2018, Mrs McClain, who is married to Mike, was pregnant when her breast was examined again.

She claims she was informed that the lump had doubled in size, and may not have been a fibroadenoma in the first place. 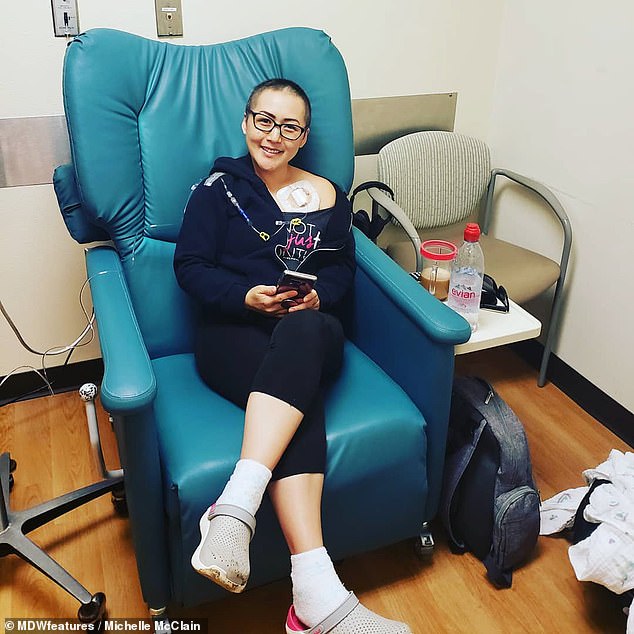 Mrs McClain found a lump in her breast in June 2018. She immediately saw her doctor and tests showed the lump was benign. Pictured, Mrs McClain having chemotherapy 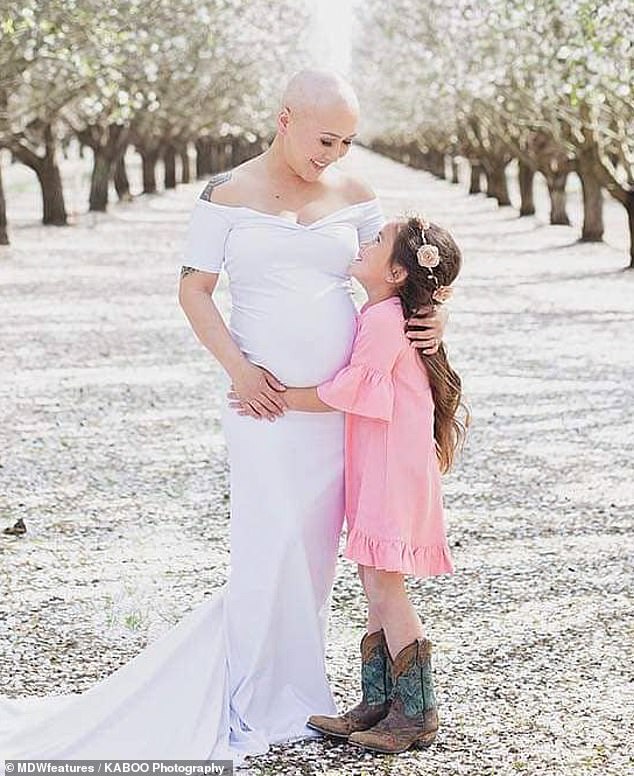 A gut feeling told Mrs McClain something was seriously wrong, and six months later, while pregnant (pictured) the lump had doubled in size 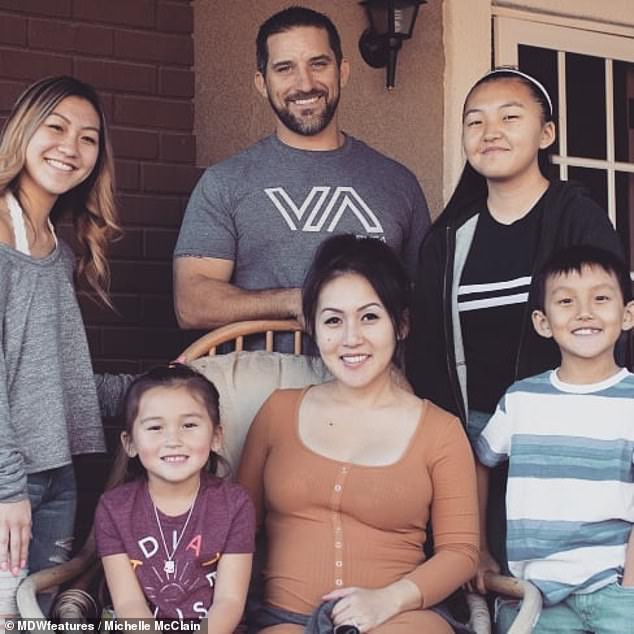 Mrs McClain said of her diagnosis: ‘All I could think about was my family. I have young children and one on the way.’ Pictured with her family – Mike, Audrey, 16, Natalie, 14, Dylan, nine, and Mieka, six

WHAT IS A FIBROADENOMA?

Fibroadenoma is the most common type of benign breast tumor, and most don’t increase your risk of breast cancer.

Although women of any age can develop fibroadenomas, they usually occur in younger, premenopausal women.

A fibroadenoma typically has a well-defined round or oval shape and a rubbery-feeling and is painless. When you touch it, it’s easy to move around under the skin as opposed to being stuck in one place.

Over time, a fibroadenoma may grow in size or even shrink and disappear. The average fibroadenoma is anywhere from the size of a marble up to 2.5 centimeters in diameter. If it grows to 5cm or larger, it’s called a giant fibroadenoma.

If you’re in your 30s or older, your doctor may recommend a needle biopsy to confirm the diagnosis.

About 15 per cent of fibroadenomas are categorized as complex.

At that point she was certain she had cancer, but she had to wait for it to be confirmed through a biopsy.

She said: ‘In December when I read the radiologist report, I knew I had cancer.

‘I was completely numb. I didn’t know if I should cry or scream or both but I didn’t because cancer wasn’t confirmed just yet.’

On January 15, 2019, Mrs McClain received the devastating news that she had stage 2b invasive ductal carcinoma – that starts in the milk ducts – triple positive breast cancer.

Around 270,000 American women and 55,200 British women are diagnosed with invasive breast cancer every year, figures show.

Breast cancer affects around one in 3,000 women who are pregnant, according to Cancer.Net.

Mrs McClain said: ‘That phone call was the worst day of my life. I was at work when I received the call. I immediately broke down, everyone was at lunch at the time so I was in the office by myself.

‘I left work and called my husband on the way home, he met me at home.

‘All I could think about was my family. I have young children and one on the way.

‘What’s going to happen to my unborn child. They needed me, I’m too young to die, I was terrified because I had no knowledge or education on breast cancer.’

Mrs McClain was given four rounds of chemotherapy during her pregnancy, which she was told would be safe for her baby. 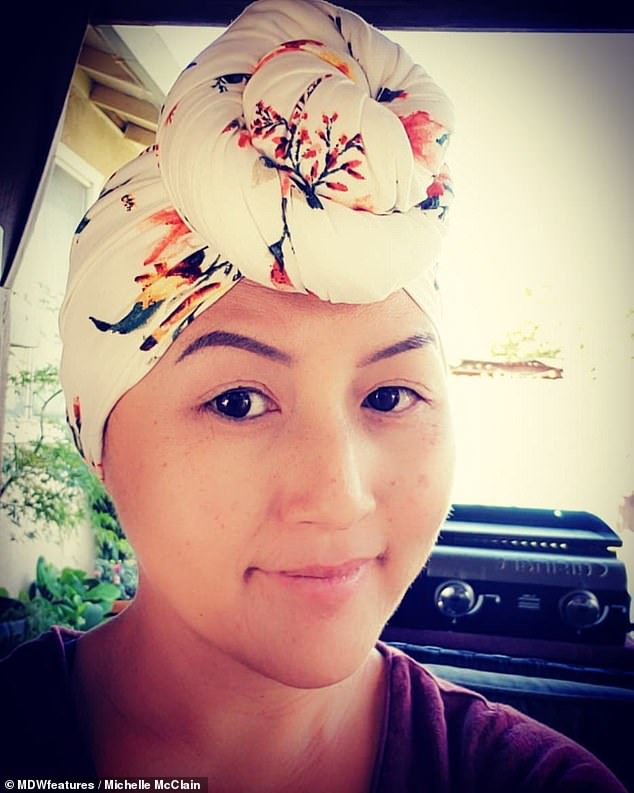 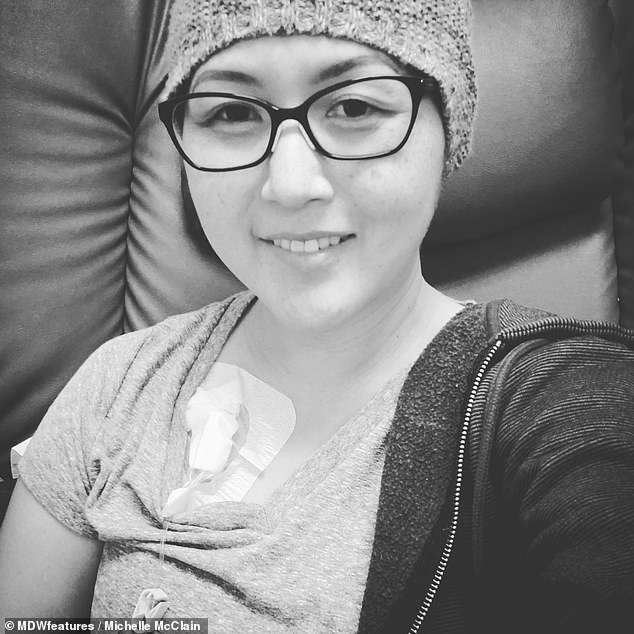 Mrs McClain was given four rounds of chemotherapy during her pregnancy which she was told would be safe for her baby. But she worried constantly 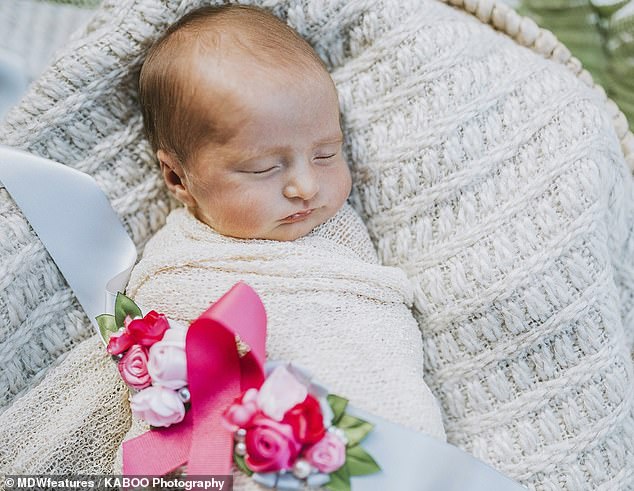 The chemotherapy would shrink the tumour and stop it from spreading so that Mrs McClain could continue with the pregnancy past 34 weeks. Pictured, Dakota after birth 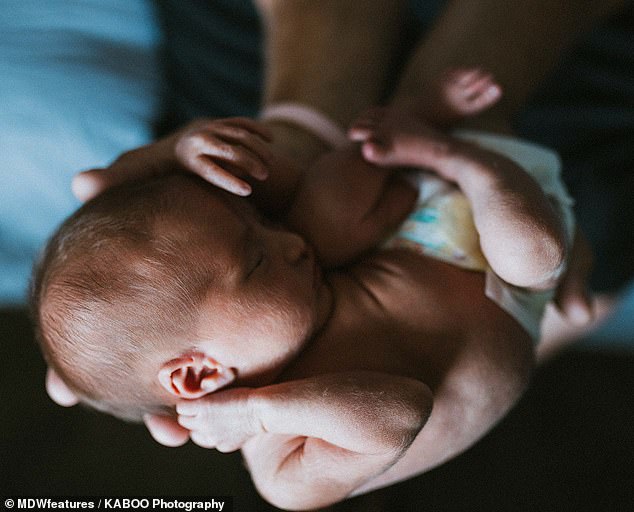 The family were relieved when Dakota was born (pictured soon after)

The family were relieved and positive that Mrs McClain could fight her cancer head on, with another 12 rounds of chemotherapy ahead of her.

Mrs McClain was initially scheduled for a bilateral mastectomy on May 23, but a mammogram showed that her tumour had started growing again.

Her surgery was cancelled, and she was put a combination treatment of three drugs, given intravenously, to block the hormones that her cancer thrives on.

A PET scan in August showed that there was no visible malignancy in her right breast and her cancer hadn’t spread to other parts of her body.

Mrs McClain had a lumpectomy to remove the cancer from the breast this month.

But she will continue having her treatment infusion every three weeks until May next year and will take hormone blockers for a minimum of five years.

Mrs McClain said her Mike and her other children, Audrey, 16, Natalie, 14, Dylan, nine, and Mieka, six, have been her rock throughout her cancer fight.

She said: ‘Both my parents are no longer here, so my family is pretty close. They are readily available when I need them for anything. 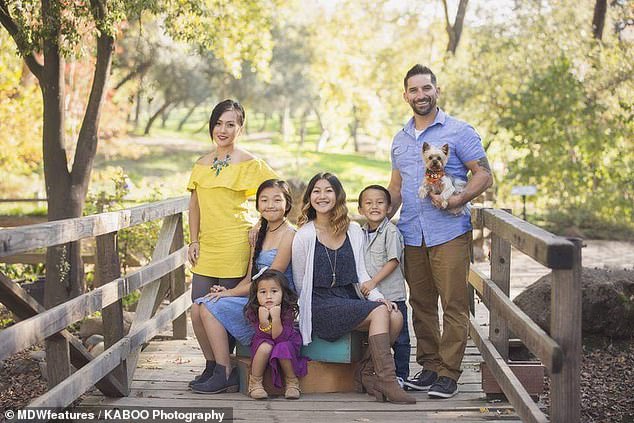 Mrs McClain (left) had a total of 16 round of chemotherapy. She had a lumpectomy to remove the cancer from the breast this month. Pictured with her family

Mrs McClain said: ‘Never think that it could never happen to you. It only takes a minute to do a self-exam. Please do it because cancer does not discriminate’

‘My mother in law is a huge help as well. She keeps the two younger children busy so I can rest.

‘I’ve accepted that I have cancer which makes it easy for me to breeze through everything.’

Since her diagnosis Mrs McClain has been encouraging women to check their breasts regularly.

She has been sharing her story on Facebook and Instagram after not having any knowledge of breast cancer before she was diagnosed.

Sharing on social media has helped Mrs McClain stay positive and she hopes she’ll be able to save a life by raising awareness.

She said: ‘I wanted to spread awareness and share my journey so people could experience it with me. It is amazing how many people actually aren’t aware of all that this cancer entails.

‘It makes me happy knowing that people are interested and asking questions. It helps me stay positive and optimistic. If I can save a life by sharing my story, why not.

‘Never think that it could never happen to you. It only takes a minute to do a self-exam. Please do it because cancer does not discriminate.

‘When something doesn’t feel right, speak up. It’s important to be your on advocate. You know your body best.’

HOW TO CHECK YOUR BREASTS

What to look out for

This is why it is so important to feel AND look at you r boobs. Dimpling and puckering of the skin can look similar to orange peel

It is important to check not just your boob but your upper chest and armpit too, as these areas also contain breast tissue

This is liquid that comes from the nipple without squeezing it

Most women may naturally have one boob bigger than the other or experience their boobs gradually changing as they get older.

Many changes are perfectly normal, however if you notice a sudden, unusual change in size or shape then get it checked out

All this means is your nipple has become pulled into the boob or looks different to usual. This could be a change in its position or shape. That’s why it is important to pay special attention to your nipple during your regular checks

There are many reasons why your skin could become irritated, especially if you are breast feeding, but if you notice any redness or a rash on the skin and/or around the nipple or any crusting of the nipple, make sure you get it checked out by your doctor

What to feel for

Some boobs are naturally lumpy and this can be perfectly normal. The key is to get to know how your boobs feel, so you would notice if any new lumps appear or if your boob starts to feel thicker in one area compared to the rest

Some breast pain can be perfectly normal, especially around your period. But keep an eye out for any unexplained pain in your breast or your armpit that’s there all or almost all of the time