A mother-of-three was left ‘shocked and embarrassed’ after being told she couldn’t breastfeed her 10-week-old daughter during a speed awareness course.

Claire Jefford, 34, from Holme Pierrepont, in Nottinghamshire, was on a speeding course run by Drive Tech in the Park Inn Hotel on Saturday.

She had brought her daughter, Maud, so she could breastfeed her.

However she was told children were not allowed in the class and she would have to leave Maud with someone else and go out when she needed feeding.

As she had no-one to look after her daughter for her, she had to leave, and is now worried she will face court if she cannot finish the course.

A spokesman for Drive Tech said those on the course needed the ‘ability to concentrate, participate and learn without external distractions.’

Claire Jefford, 34, was left ‘shocked and embarrassed’ after being told she couldn’t breastfeed her 10-week-old daughter during a speed awareness course

Recalling the incident Mrs Jefford said: ‘I was shocked and embarrassed, I did not even think it would be a problem to bring my baby. I’m worried about what I am going to do now.

‘I have never had a problem with breastfeeding and bringing my babies to places before.

‘I would never have brought my older children along but I had to bring Maud with me, she needs feeding as much as every hour.

‘Breastfeeding is the best thing for a baby, I would not consider using a bottle and I cannot express so I had no other option but to bring her.’

Mrs Jefford had been caught speeding in Nuthall on July 28, driving 36mph in a 30mph zone.

She decided to attend a four-hour course instead of getting three points on her licence.

But if she does not go to one of the speed awareness courses by the end of November she could have to go to court.

The former physiotherapist, who is now a full-time mother to her three children, said there is no one who could sit with Maud as her husband Mark has to look after their other children, five-year-old Olive and Cyril, three.

Her 46-year-old husband, a General Practitioner in Newark, said: ‘Maud is well-behaved and wouldn’t cause any problems, she only makes a noise when she wants feeding. 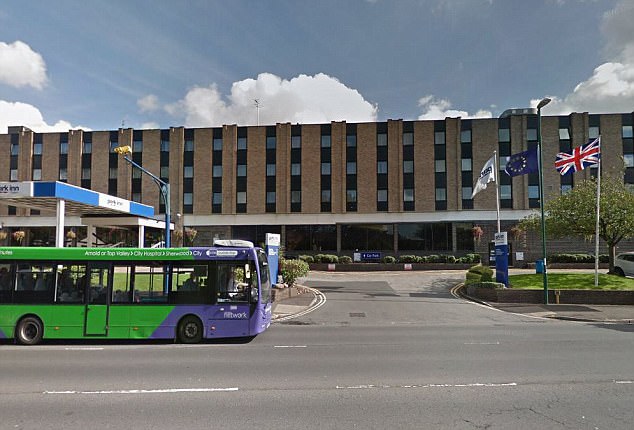 ‘We were never told that taking a baby and breastfeeding would be a problem. Bringing a baby somewhere should be normal, you should not have to be thinking about it in this day and age.’

A spokeswoman for Drive Tech said: ‘It is important that everyone attending a speed awareness course, which is an alternative to prosecution, has the ability to concentrate, participate and learn without external distractions.

‘Because of this, we are unable to allow entry into the course room to anybody other than the individual(s) due to undertake the course, with the exception of medical aides or interpreters.

‘We, and all other suppliers, must adhere to the guidelines laid down by NDORs (National Driver Offender Re-training scheme). As such our stance regarding the provision of service for breast feeding mothers is laid out for us.

‘She would have been very welcome for a friend or family member to care for the baby in another room while the course took place and indeed, would have been able to take a break to attend to the baby.

‘I am very sorry if any distress was caused to the mother in this case. A member of our customer relations team will be in touch with the lady directly to resolve this with her.’