A Canadian mother was forced to stop breastfeeding her daughter during a mommy and me class at a gym on Sunday.

Nursing mom, Monica Makey, took her daughter, Vayda, almost two, to her first session at Dynamo Gymnastics in Hespeler, Ontario, where the toddler said she wanted to be fed.

Makey stopped participating in the activity and quietly sat down near the mats to nurse her daughter.

That’s when a supervisor walked toward the two and ordered Makey to stop feeding due to the gym’s strict food and drink rules. The supervisor claimed the reasoning was because ‘breast milk could stain the mats’. 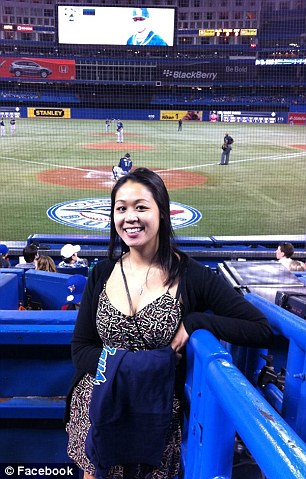 Nursing mom, Monica Makey, (pictured right) took her daughter, Vayda, (left) almost two, to her first session at Dynamo Gymnastics in Hespeler, Ontario, where the toddler asked to be fed 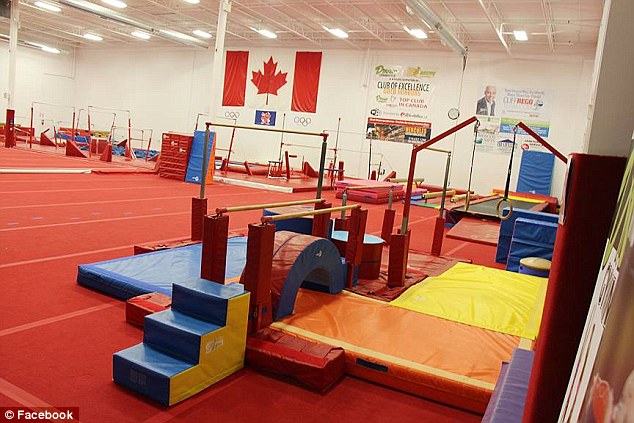 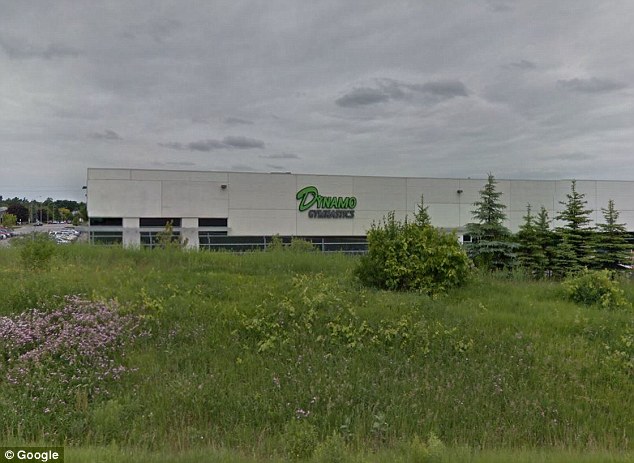 However when the mother asked to move to another area in the gym, she was again told she could not breastfeed

Makey then requested she and her baby relocate to another area inside the gym, where visitors kept their water bottles and belongings. The supervisor again refused.

Later on, Makey took the matter up with the owner, stating her freedoms under the Ontario Human Rights Code, which says mothers have the ‘right to breastfeed a child in a public area’ and should not be asked to ‘cover up’ or ‘move to a more ‘discreet area’.

The Cambridge woman took to her Facebook page following the incident to share details as way to highlight mothers’ rights as well as help others understand that breastfeeding is vital.

‘I am genuinely happy to see that the gym is taking measures to ensure they are now following the OHRC laws surrounding breastfeeding and that this doesn’t happen to another mother in the future,’ Makey wrote to Facebook later Sunday. 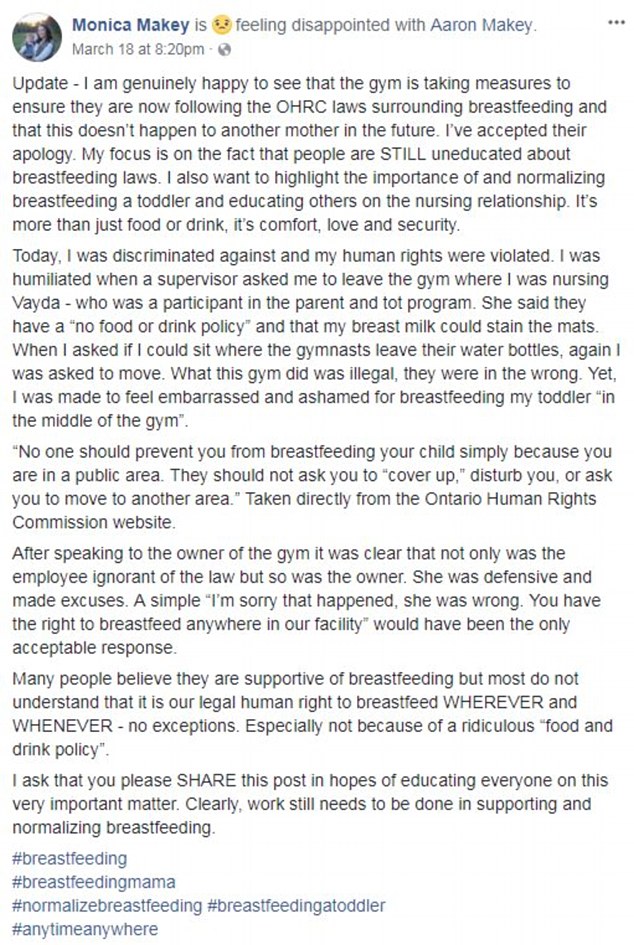 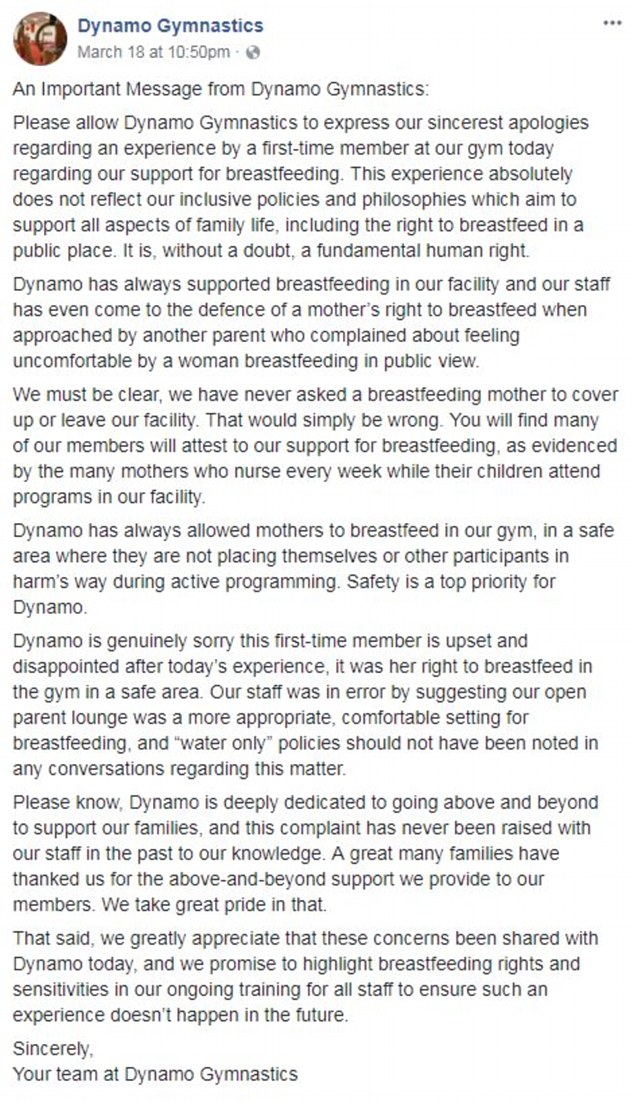 Dynamo Gymnastics also posted a message to their social media page, and apologized to Makey 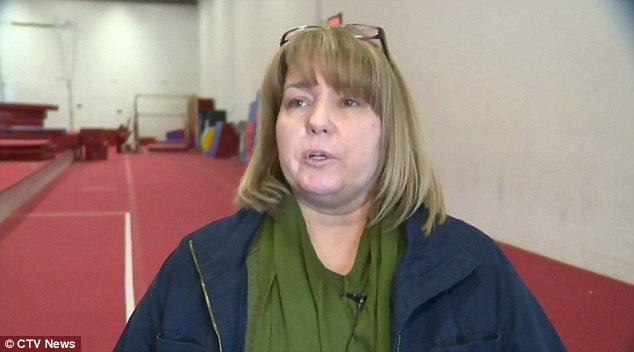 Dynamo also took to their Facebook page to issue a public apology over the matter.

‘I’ve accepted their apology… my focus is on the fact that people are STILL uneducated about breastfeeding laws,’ Makey’s post read in part.

‘I also want to highlight the importance of and normalizing breastfeeding a toddler and educating others on the nursing relationship. It’s more than just food or drink, it’s comfort, love and security.’

Makey received a refund for the gymnastics session. Gym co-owner, Lisa Rutledge, told CTV News Canada the incident was ‘unfortunate’ and the supervisor was ‘misinformed’ about their policy.

Rutledge furthermore said that a breastfeeding specialist will be visiting Dynamo to re-train staff members.

‘Regardless of the situation and anybody’s views, it’s a mothers complete right under the Human Rights Code to breastfed wherever and whenever she likes,’ Rutledge added. 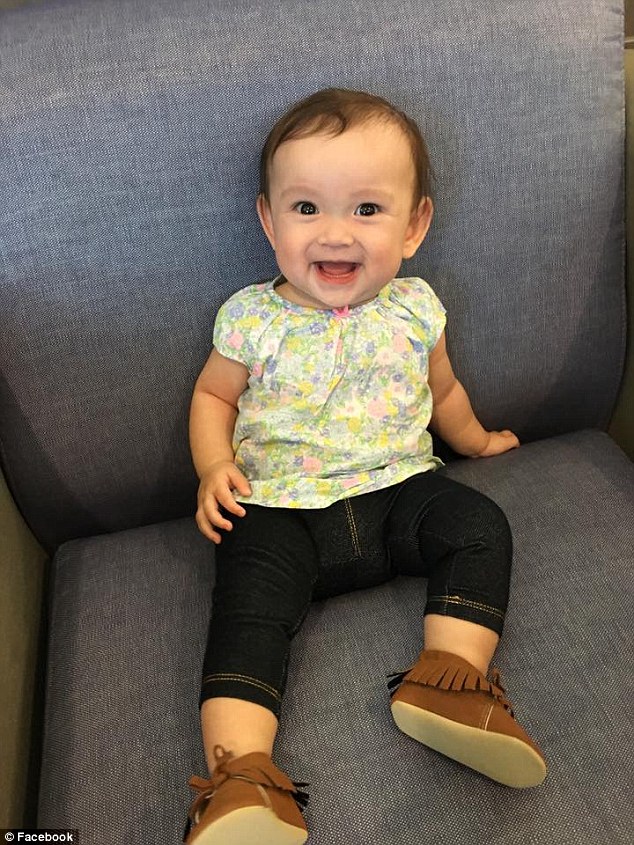 Toddler Vayda, almost two, was at her first session at Dynamo Gymnastics in Hespeler, Ontario at the time 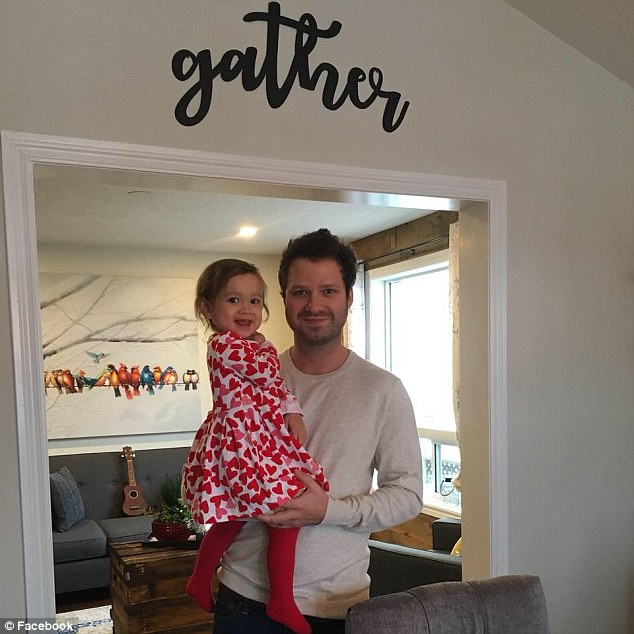