A mother caring for her leukaemia-stricken son lost an eye to cancer after neglecting her own health.

Janna Clark, 36, was diagnosed with cancer the day before her son, George Wyatt, now seven, was given the all-clear after a three-year battle.

She received the devastating news that she had a tumour inside her right eye, and the only option left was to have the eye removed.

The mother, of Harold Wood, Essex, had dismissed her symptoms of tiredness, headaches, and blurred vision down to stress.

The former hairdresser has now posted a moving video to Facebook, urging other carers and parents to look after themselves and get their eyes tested.

Janna Clark, 36, was diagnosed with cancer the day before her son, George Wyatt, now seven, was given the all-clear after a three-year battle 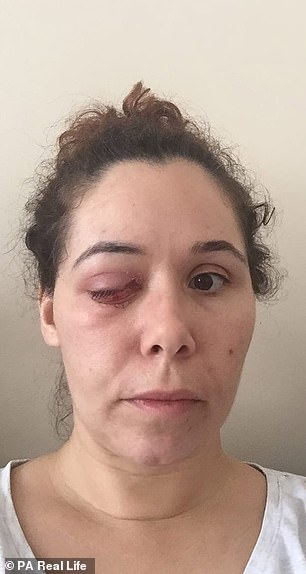 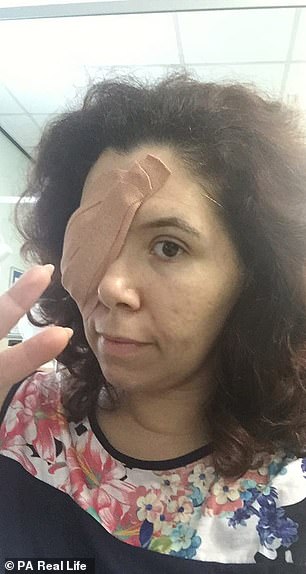 She received the she had a tumour inside her right eye, and the only option left was to have the eye removed. Now, she wears a plastic shield to protect the socket as it heals 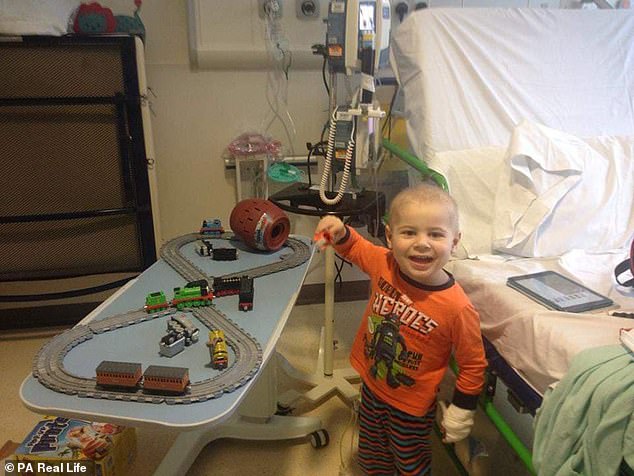 George was diagnosed with acute lymphoblastic leukaemia aged three. He was given the all-clear after three years of cancer treatment

In a video that has already attracted 15,000 views, Ms Clark takes off her sunglasses to reveal her lost eye.

She recalls the horror her family, including daughter Bonnie Wyatt, 10, and husband security engineer Jay Wyatt, 40, have suffered.

‘And it should have been an iconic and amazing day for us. Unfortunately, the day before I got the heartbreaking news that I had eye cancer.

‘I didn’t know what was going to be happening, I didn’t know my course of treatment, all I felt was that moment of joy for our family had been taken away, yet again, by this cruel disease.’

George was diagnosed with leukaemia aged three in October 2014, after suffering with constant infections, including streaming colds and suspected asthma.

‘As a mum, I knew something wasn’t right with him’, Mrs Clark said. ‘We’d been up to the accident and emergency department around 12 times before he was finally diagnosed.’

Mr and Mrs Clark were told their little boy had acute lymphoblastic leukaemia, an aggressive form of the disease. 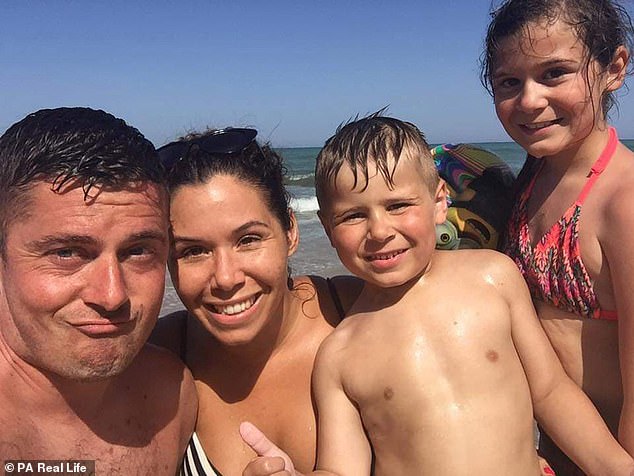 ‘All I felt was that moment of joy for our family had been taken away by this cruel disease’: Mrs Clark, pictured before her diagnosis, recalls the day she was told she had eye cancer (pictured with husband Jay and children George and Bonnie before her diagnosis)

‘It was totally devastating for us,’ Mrs Clark said.

‘When we were told I just lay on the floor and cried and screamed, I couldn’t believe it was true.’

Supporting her son left Janna with little time to worry about herself and when her vision blurred, she dismissed it as stress.

Mrs Clark said: ‘I had all the symptoms of eye cancer, but just did not read my body. I didn’t recognise what was going on.

‘I had constant headaches, dizzy spells, was always tired, had stabbing pain and blurred blobs in my eyes, but I just thought they were migraines.’

In November 2017, when she started getting headaches every day and her energy hit an all-time low, she finally visited her GP.

Told to get a blood test, Mrs Clark admits she was too preoccupied with the final months of her boy’s treatment and forgot all about it.

Then, whilst shopping in January in Grays, Essex, Mr Clark, who she has been with for 14 years, finally persuaded her to get her eyes tested.

She said: ‘He coaxed me, saying, “Why don’t you just go to Vision Express here and get them tested?” 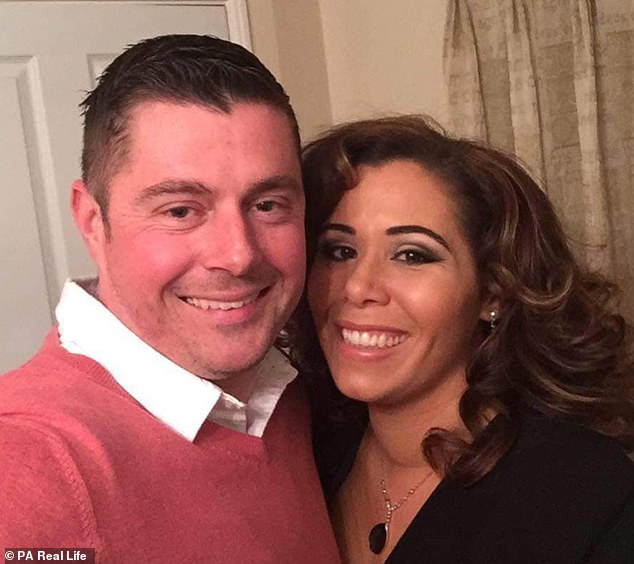 Mrs Clark’s husband, Jay Wyatt, convinced her to get an eye test in January, after Mrs Clark admits she was too preoccupied with her son’s final months of treatment to check her own 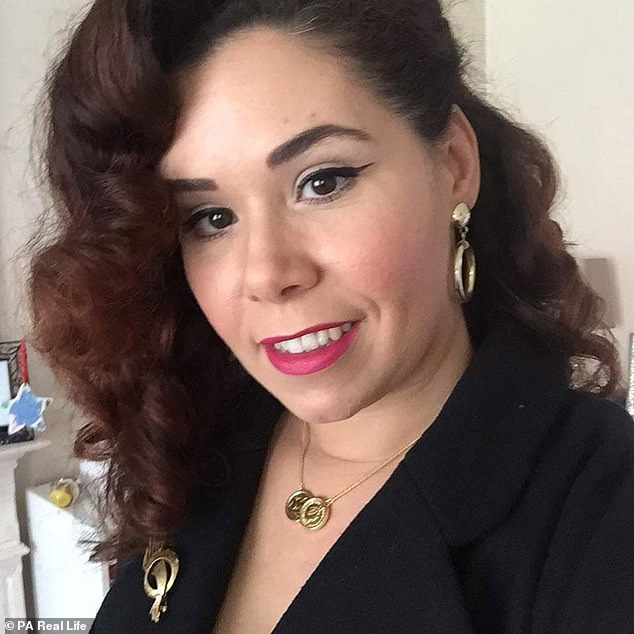 Mrs Clark had a 7.8mm tumour inside her right eye, called a uveal melanoma. Being darker skinned and dark eyed, it was rare for Mrs Clark to have eye cancer

‘I’d not been in a good way over Christmas, shutting one eye without even knowing it and losing some of my peripheral vision.

‘So I told the assistant I was never without a headache, had blurring and saw flashing lights sometimes so big when I was driving that I thought they were a car.’

The alarmed optician referred Mrs Clark to London’s Moorfield Eye Hospital and a month later, she received the devastating news there was a 7.8mm tumour inside her right eye, called a uveal melanoma.

Eye melanoma occurs when the pigment-producing cells in the eyes divide and multiply too rapidly. This produces a lump of tissue known as a tumour.

People with lighter eye colour and skin are at a greater risk of developing eye melanoma, although it is unclear why.

Told she would need proton beam therapy – a type of radiotherapy, which can cause less damage to surrounding tissue but is not widely available in the UK, she was referred to The Clatterbridge Cancer Centre in Liverpool for treatment.

But there, just two days into the four-day treatment, doctors discovered her retina had become badly detached.

Sadly, reattaching it came with a high chance of spreading the cancer, meaning the only option left for Mrs Clark was to have the eye removed.

Telling her children that she had a poorly eye, so was ‘getting a new one’, was one of the hardest things she had ever done.

Since going under the knife on May 14, Mrs Clark has experienced some complications with wearing the prosthetic eye, so is currently wearing an ocular conformer – a temporary acrylic plastic shield used to protect the healing eye socket.

Both she and George have now had the all clear, and Mrs Clark wants her story to act as a cautionary tale to others, who are putting health checks off. 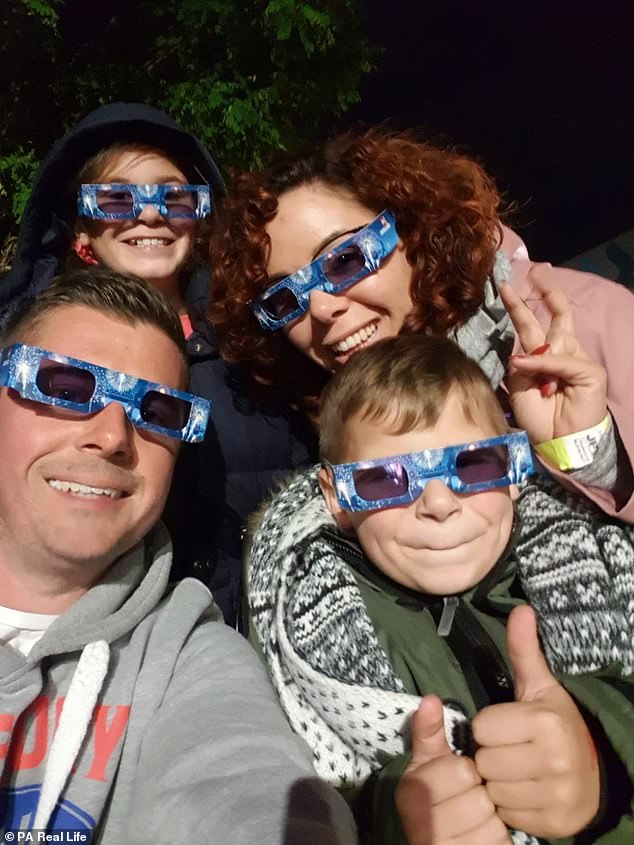 Telling her children, daughter Bonnie Wyatt and son George Wyatt, that ‘Mummy had a poorly eye, so was getting a new one’ was one of the hardest things Mrs Clark had ever done 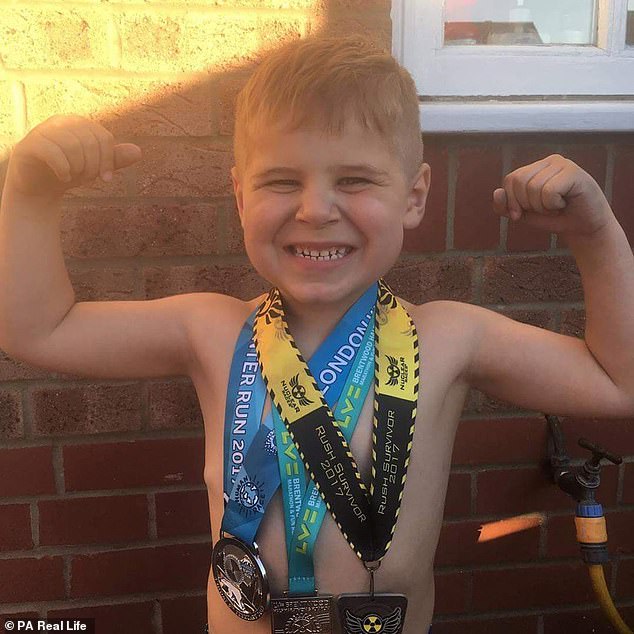 WHAT IS EYE CANCER?

Eye cancer most commonly affects the middle layer of the organ.

Around 750 new people in the UK are diagnosed with eye cancer every year.

It affects approximately 3,500 new people annually in the US.

The main cause is over exposure to UV light, leading to melanoma.

This is more common in people with fair skin, hair and eyes, as well as those with a large number of moles.

Treatment depends on the type and size of the cancer, as well as whether it has spread.

It may involve radio or chemotherapy and surgery.

She said: ‘The moral to this is, if I had got seen quicker I would probably still have my eye.

‘Now I want parents or carers to remember to look after themselves while they are looking after others. As a parent or a carer you put yourself on the back-burner.

‘I had headaches for over a year, but I thought I was tired and stressed out, because I was looking after everybody.

‘I am ashamed to say the last time I’d had a sight test was nine years before the one that detected something was amiss.

‘Call me ignorant, but I never knew you could get eye cancer. Going to the optician is not just about getting glasses, it’s about your eye health.’

‘Please watch my video and please share it, it could save a life.’

Jay Ghadiali, director of professional services at Vision Express said: ‘As Janna’s story highlights, even if you believe your vision is fine, it is still crucial to get a regular eye test, and the NHS recommends one at least every two years.

‘Janna is not alone – 13.8 million Brits don’t have regular eye tests and over 2.3 million believe they should only head to an optician when they start having problems or experiencing pain.’