A mother who nearly died of COVID-19 has opened up about meeting her newborn son nearly one-month after he was born via emergency C-section while she was on a ventilator.

Jessica Rowlett, 35, feared for her life when she welcomed her second child, a baby boy named Rowdy, on May 31 in a hospital in Nashville, Tennessee. The mother of two didn’t get to meet her son until weeks later.

‘Honestly I was kind of numb,’ the mother of two told Good Morning America of the first time she saw Rowdy in person. ‘I just looked at him from across the room and he didn’t feel like he was mine.’

Reunited: Jessica Rowlett, 35, was battling COVID-19 when she welcomed her baby boy, Rowdy, on May 31. She didn’t get to see him in person until nearly a month later 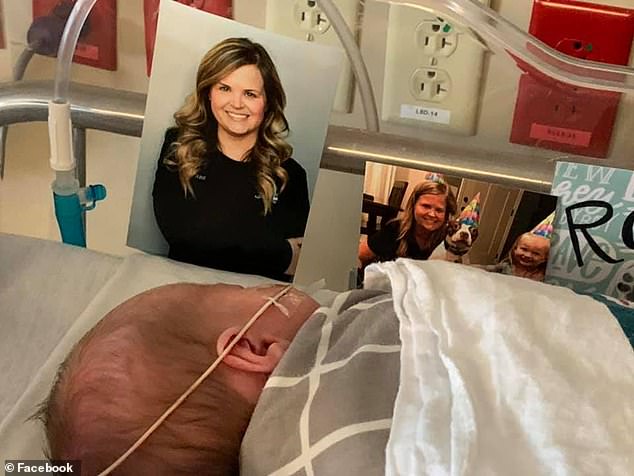 Separated: Rowdy tested negative for COVID-19 and was taken to the NICU after he was born via emergency C-section while his mother was on a ventilator

Jessica was 31 weeks pregnant when she was diagnosed with COVID-19. She contracted the novel illness just a few weeks after she returned to her job as a dental hygienist following the office’s temporary shutdown in March due to the pandemic.

‘I had a very hard time breathing and kept falling asleep and wasn’t making any sense when I was talking to my husband,’ she recalled.

Jessica’s OBGYN instructed her husband, James, to take her directly to a larger hospital with a COVID-19 unit in Nashville, which is about 40 minutes away from their home.

James was forced to drop his sick wife off because he wasn’t allowed to go into the hospital due to coronavirus restrictions.

The expectant mom was put on oxygen immediately, but a few days later, her oxygenation became so poor that it was unclear how much oxygen the baby was getting through the placenta. 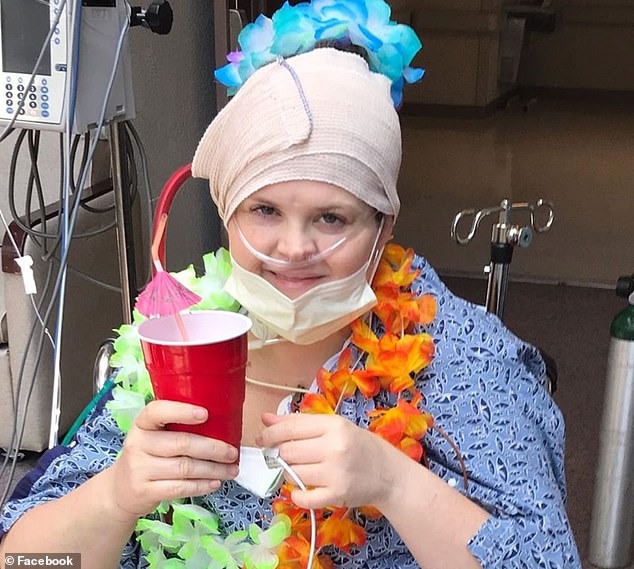 Life saver: As she continued to battle COVID-19, she was placed on an ECMO machine, which pumps and pumps and oxygenates a patient’s blood outside the body

Jessica was 33 weeks pregnant when it was determined she would have to have an emergency C-section. James was allowed to see his wife briefly before the surgery, and they both recalled being terrified at that moment.

‘I remember stopping [the doctors] and telling my husband that I was sorry,’ Jessica recounted. ‘He said, “Why are you sorry?” and I said, “Because I’m about to leave you with these two kids.”‘

The couple’s son Rowdy was born premature, weighing 4 pounds, 15 ounces. Although he tested negative for COVID-19, he had to be briefly intubated because of the heavy sedation Jessica was under during the C-section.

The preemie was too small to be fed using a bottle and his mother was unable to breastfeed, so when he was taken to the hospital’s neonatal intensive care unit (NICU), he was given a feeding tube.

After being with Jessica in the hospital, James had to quarantine for two weeks before he could see their baby boy. Once it was safe for him to visit their son, he arranged childcare for their four-year-old daughter and traveled to the hospital daily. 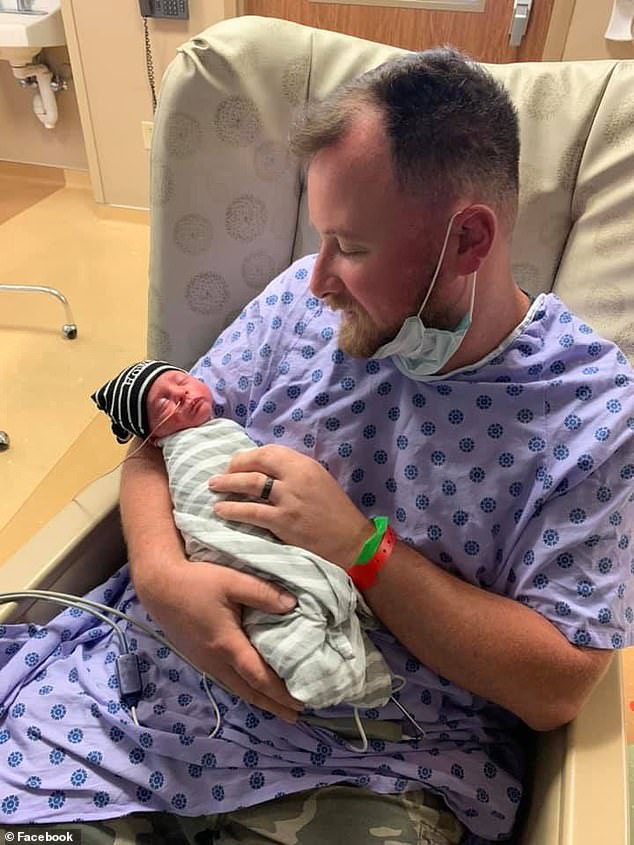 Precautions: Jessica’s husband, James, had to quarantine for 14 days before seeing their premature son in the hospital 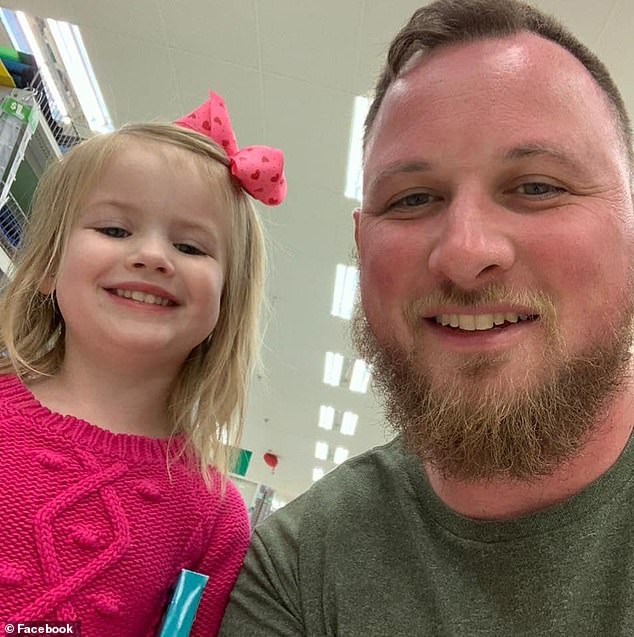 Devoted dad: Once it was safe for him to visit their son, he arranged childcare for their four-year-old daughter and traveled to the hospital daily

When Jessica woke up from the sedation the day after her C-section, she felt her belly confused. A nurse had to tell her that her baby was fine.

As she continued to battle COVID-19, she was placed on an ECMO machine, which pumps and pumps and oxygenates a patient’s blood outside the body. Only a small number of hospitals in Tennessee have the machine, which she insists saved her life.

Rowdy’s crib in the ICU was decorated with pictures of his mom, who was only able to see her husband and children through FaceTime calls.

Jessica slowly began to recover and was eventually moved out of the ICU and off the hospital’s COVID-19 floor. After she was taken off the ECMO machine, she and Rowdy were both released from the hospital on June 26.

The mother of two took to Facebook a few days later to share a heartwarming photo of herself wearing a mask while holding her baby boy.

‘All is well with my world again! I’ve got a lot of work to do, but am so thankful to finally meet my son and be home with my family,’ she wrote. ‘We appreciate all the love, support and continued prayers. It’s been truly overwhelming to have a community’s support! 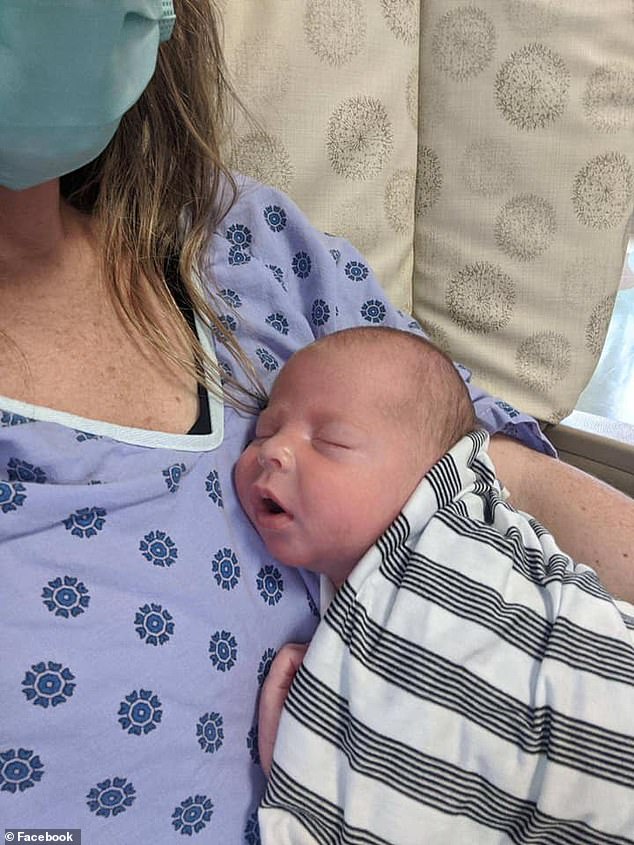 Surreal: Jessica said she felt ‘kind of numb’ when she saw Rowdy in person for the first time. They were both released from the hospital on June 26 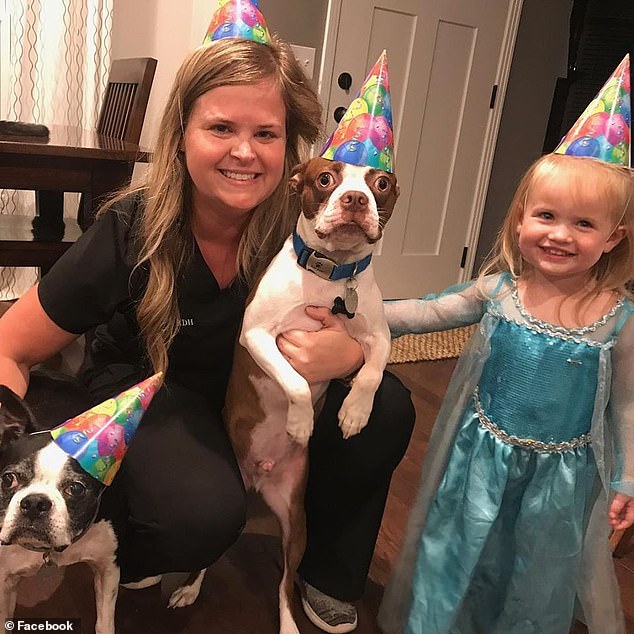 Long road: Jessica, pictured with her daughter before her battle with COVID-19, is expected to need oxygen for the next year or two and physical therapy to build her strength back up

‘I’m still not at 100% and with having a preemie at the house, in the middle of a pandemic, we ask for no visitors please,’ she added. ‘All phone calls, texts, and prayers are greatly appreciated!’

Over the past three weeks, the mom has been able to bond with her son, but she still has a long recovery ahead of her. She is expected to need oxygen for at least the next year, and she will also have to undergo physical therapy to regain her strength.

‘I have 30 per cent lung capacity now because of the scar tissue and the respiratory therapist said I’ll be on oxygen for one to two years but I’m going to prove her wrong,’ Jessica told GMA. ‘She also said running a marathon is not in my future and I said, “That’s fine. I’m more of a mall walker.”‘

Tennessee is one of the many states that has seen a steady increase in the number coronavirus cases over the past few months.

On Monday, the Tennessee Department of Health reported 79,754 confirmed cases and 784 probable cases of COVID-19, an increase of 1,639 total cases since Sunday.

Statewide, there have been 847 confirmed deaths, 3,712 hospitalizations, and 45,974 recoveries, according to the health department.