A mother who went viral with a heartbreaking picture kissing her tiny baby’s lifeless body has shared new images of her ‘rainbow baby’ born a year later to give hope to other parents.

Positive birth companion and author Justine Zampogna, 31, from Perth, shared her loss on Instagram in 2018, showing followers a picture of her kissing terminated baby Gigi, 16 weeks, who was diagnosed with anencephaly, a major neural tube defect, at 14 weeks.

She’s now revealed how she welcomed a rainbow baby boy, now two, a year after losing Gigi, who was born on what should have been his sister’s due date if she’d survived.

The term ‘rainbow baby’ is used to describe a baby born to a family after a miscarriage, pregnancy loss, or stillbirth.

Positive birth companion and author Justine Zampogna, 31, from Perth, went viral in 2018 for sharing a heartbreaking picture of her daughter Gigi, who was born stillborn due to a brain defect. A year after, she welcomed Jagger, in an emotional home birth (pictured) 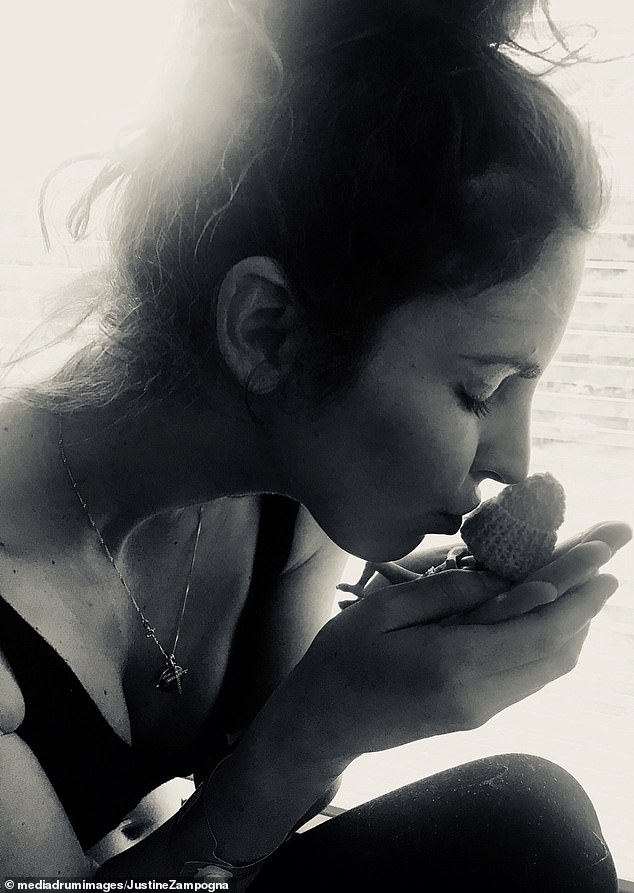 This poignant image of Justine kissing Gigi, who was born stillborn at 16 weeks, made worldwide headlines in 2018

Justine, who looks after Jagger and his big brother Chase, now six, recalled how she allow herself to enjoy her pregnancy in spite of the previous traumatic experience, and that Jagger was born with the same team and home birth she had planned for Gigi.

At the time, Justine’s heartfelt post spread across the world, encouraging parents to open up about their own losses and feel supported by an empathetic community.

‘For as long as I can remember I have always had a journal and written all of my feelings down,’ said Justine. ‘However, Instagram for me was only ever a space to share our awesome family beach adventures – I never went deep.

‘But the moment I was confronted with having to terminate my baby girl I shared my feelings in a post and I could not believe the response from other grieving mamas.

‘My words now had a real purpose and I knew that so many women suffer in silence with this type of loss. 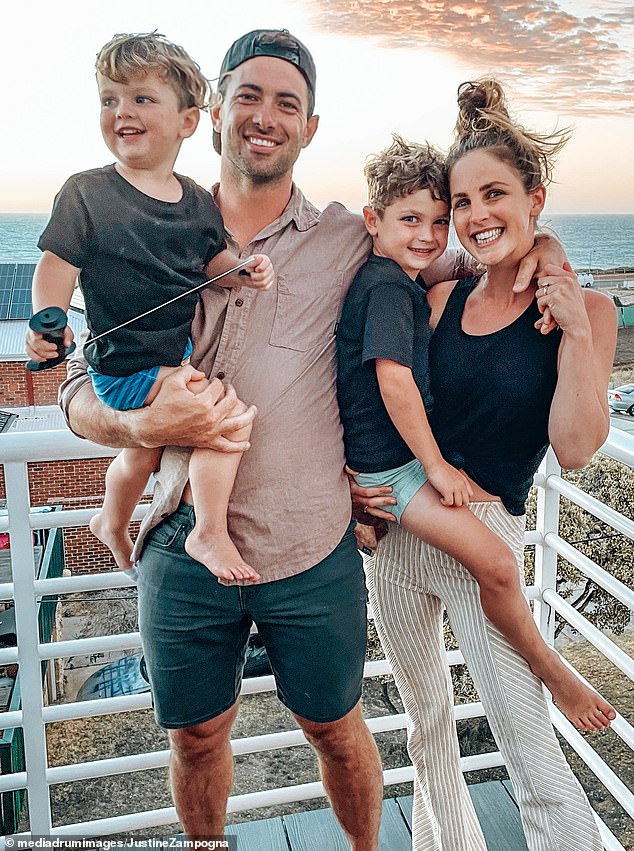 Three years on from losing Gigi, Justine is a happy mother-of-two boys, Chase, six, in her arms, and Jagger, now two, in his father’s arms, left. She admitted she was uncertain about ever having another baby after Gigi’s stillbirth

‘My very first journal entry I shared – “my new normal” – the day after birthing Gigi, I received over a thousand private messages from women across the globe telling me that my words were healing and helping them.

‘I think there is something really powerful about seeing the way you feel written by someone else – it’s externalised and also knowing that you are not alone.

‘Every message I read, I cried. I felt so blessed that these women felt as though they could open up to me and share their own pregnancy loss stories with me. 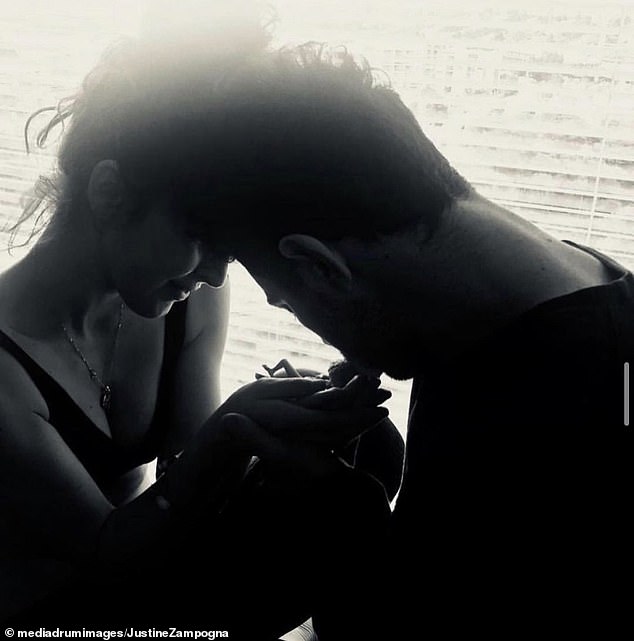 Justine and Ty with Chase and Jagger when the boys were younger. Jagger was born on the estimated date of Gigi’s birth if Justine had completed the pregnancy

‘But the most special part of it all – these women were helping me just as much as I was helping them.

For a short time after giving birth to Gigi, Justine was uncertain about having another baby – but soon she and her husband Ty, 32, decided to try again.

‘I already so deeply knew that being a mum was such a blessing,’ said Justine. ‘But my loss just really intensified this to me. 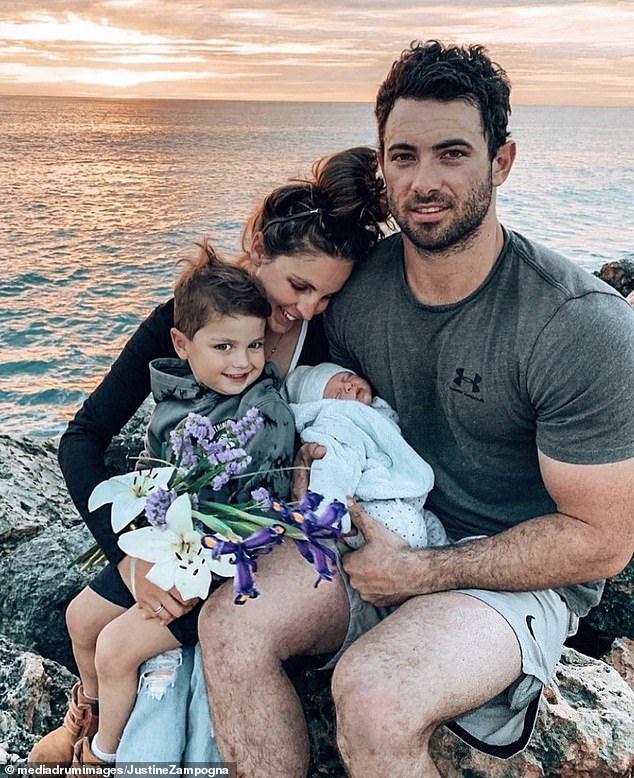 The family shortly after Jagger’s birth in 2019. Justine revealed how she decided to celebrate her new pregnancy after losing Gigi 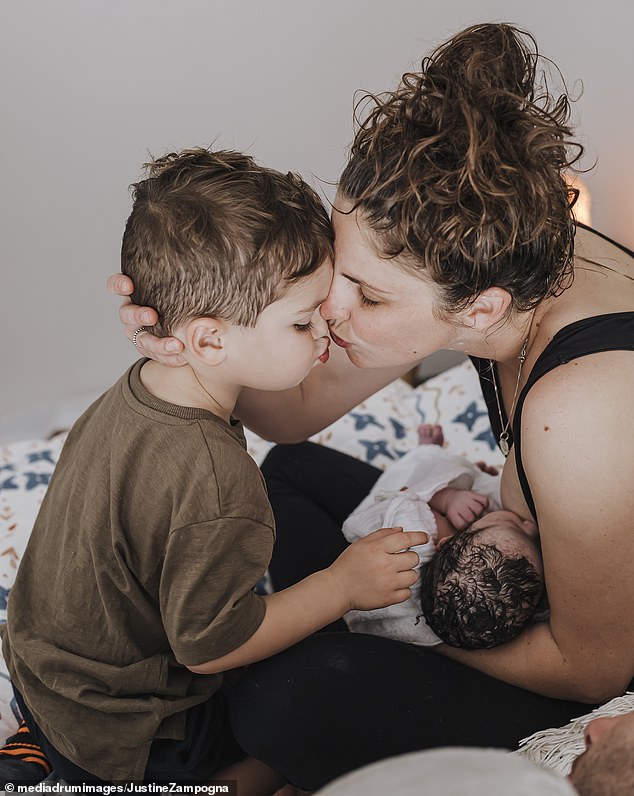 ‘I was scared the longer I waited, the harder it would be. So after a few months of allowing my body to heal we decided to try again.’

Justine discovered she was pregnant again in December 2018 – and was surprised by the new baby’s due date.

‘As soon as I saw those positive pink lines, I celebrated them,’ she said.

‘I quickly switched my Flo app over to “pregnant” to see when this precious baby of ours would be due and – you wouldn’t believe it – the exact same date I birthed Gigi. I knew she was close by.’ 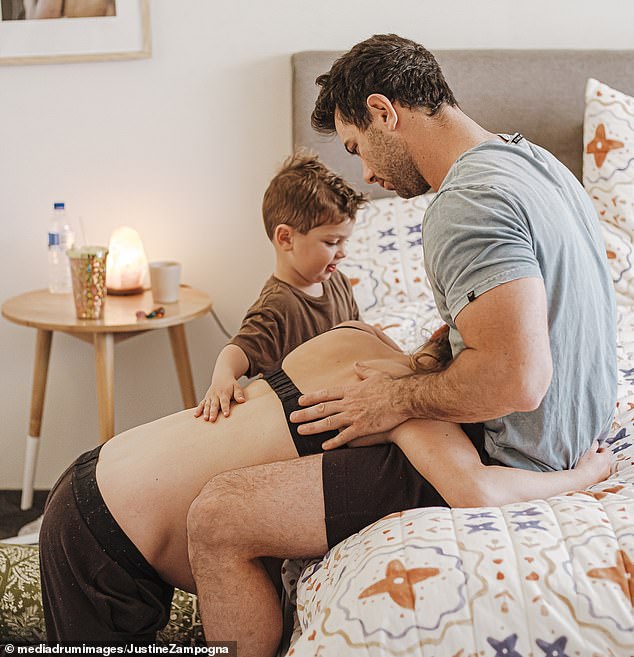 Chase and Ty comforting Justine during her labour with Jagger in 2019. Justine revealed how her family and community supported her in her recovery from Gigi’s passing 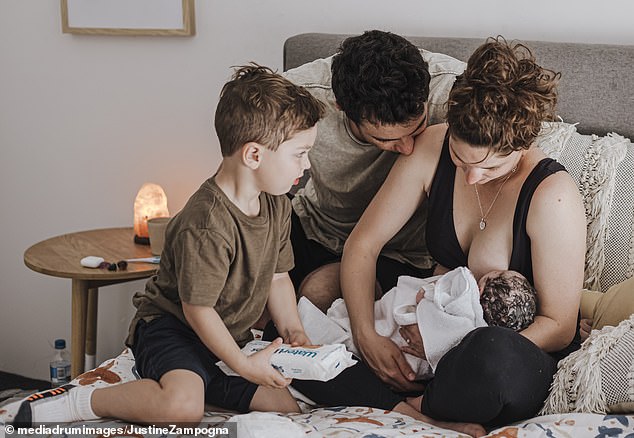 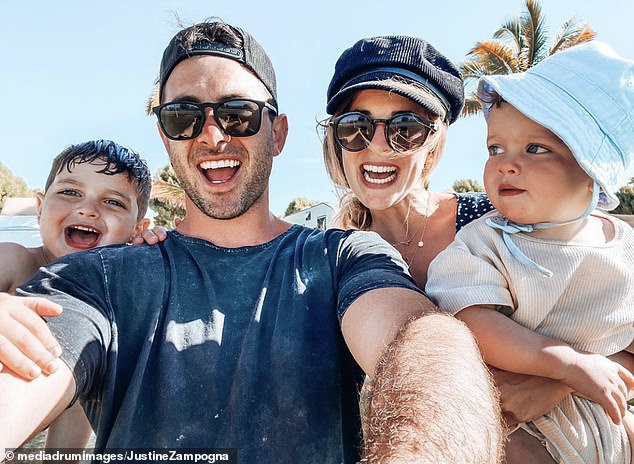 The family when Jagger was a baby. Justine said she received thousands of messages from women who went through similar experiences after she went public with Gigi’s death

Anencephaly, sometimes referred to as ‘open skull’, is a rare birth defect.

It causes parts of a foetus’ brain, scalp and skull to not form completely.

The defect occurs during the third and fourth weeks of pregnancy, according to Cleveland Clinic.

It happens when the neural tube, a channel in the foetus that normally closes to form the spinal cord and brain, doesn’t close as it should.

As a result, children with anencephaly are born without part of their skull and brain. They are often blind and deaf.

Babies with the defect, which strikes one in 5,000 babies each year, tend to die within weeks. There is no cure.

As Justine’s third pregnancy, she was used to the morning sickness and other symptoms – but this time, there was a new poignancy to the experience.

‘With Chase, my eldest, I absolutely loved pregnancy,’ she said.

‘I felt so blessed I was growing life and that we were starting our very own family. Yes, I still always felt a little anxious and so desperately needed that moment of him being safe earthside in my arms but it was nowhere near as heightened as the anxiety I had post-loss.

‘This time round was different. We had been exposed to pregnancy loss and the heartache that comes with it.

‘So there was anxiety and very mixed emotions with it – not to mention I was still healing from my loss.

‘To be completely honest, pregnancy after loss is hard. It’s just so different and I’m not sure it will ever be the same.

‘A loss intensifies motherhood and just how unbelievably beautiful and precious it is – every single part of it.

‘It also exposes you to the heartache on a much deeper level where it’s only normal to feel fear, sadness, pain, regret and guilt when experiencing your next pregnancy.

‘I think the most important thing was to know that it’s okay to feel different – it is only normal. 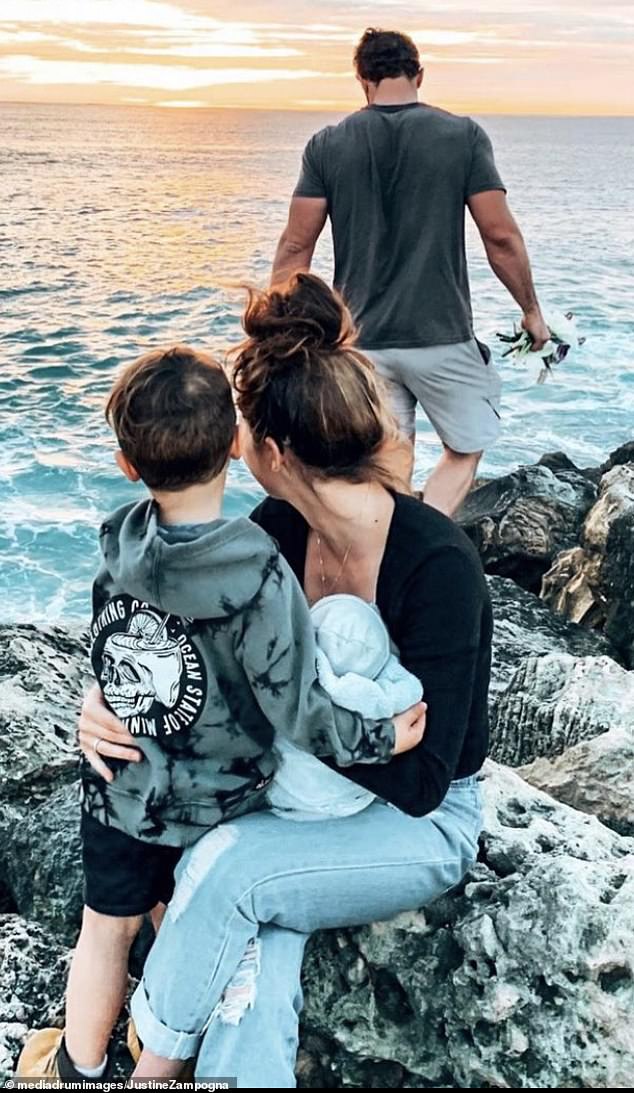 Justine admitted being pregnant again after losing a baby had been hard, because she suffered from heightened anxiety. Pictured with Chase and Jagger when her youngest son was a baby

‘Some days were filled with pure happiness and gratitude where I felt so unbelievably connected to my bubba that I was growing.

‘And other days were spent missing Gigi so intensely, days of guilt and days of fear, wishing away time, to be in that very moment of having my baby finally here safe in my arms.

‘I continued to honour every single emotion. I allowed myself to feel every emotion and then I let it go… sometimes over and over each day.

‘But most of all, I gave myself permission to love my rainbow baby that I was growing so much.’

Justine decided to have a home birth for Jagger, as she had planned for Gigi, using the same supportive team of midwives. 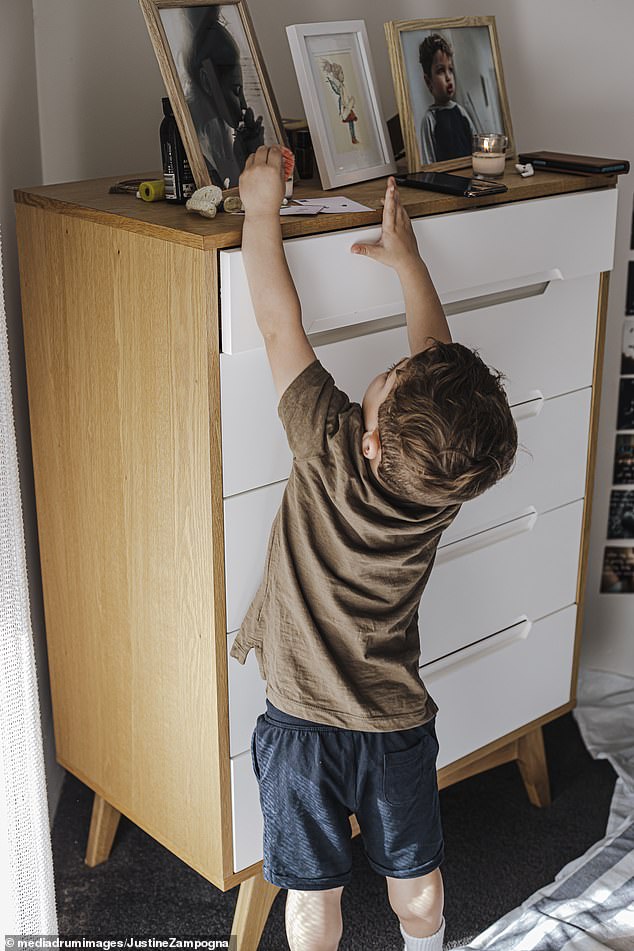 Justine said Chase still talks about Gigi and the family have framed the picture of Justine kissing the stillborn child, left 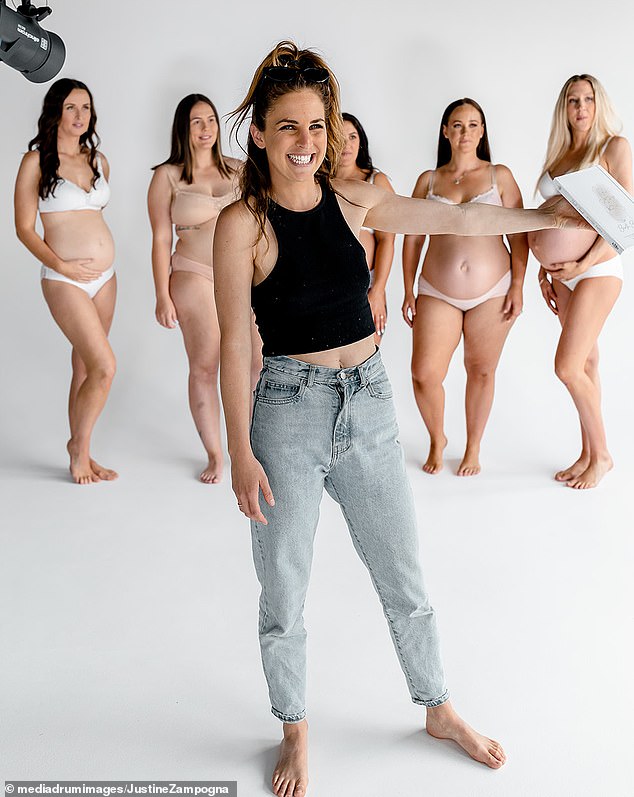 Justine opens up about her experience with grief and pregnancy in her book Birth Book, which is designed to support and empower mothers to experience positive births through their own methods and trust in their own instincts

‘During my birth, I drew so much strength from my pregnancy loss journey, having my eldest son by my side and being so close to finally having my rainbow baby in my arms,’ she said.

‘It was absolute magic. I went in to a whole new world, where I felt so connected to my body and to my baby and the more powerful it became the deeper I went.

‘I wanted to make the most of each surge, and as weird as this may sound, after my pregnancy loss journey and that pain I felt, I really wanted to feel birth for all that it is.

‘It was at this moment I knew I had to write my interactive book – “Birth Book” – and get it in the hands of all the pregnant women in the world.’

Birth Book is designed to support and empower mothers to experience positive births through their own methods and trust in their own instincts.