An Adelaide woman who fatally shook her infant son withheld information from medical staff trying to save the child, a court has heard.

Jennifer Nicole Kennison, 31, appeared in the South Australian Supreme Court on Monday March 26 after last year pleading guilty to one count of manslaughter over the 2016 death of her child, who suffered a brain injury and 16 rib fractures.

Her lawyer, Justin Wickens, told the court Kennison’s actions were the result of a momentary lapse of judgment after she became frustrated with the unsettled baby.

Jennifer Nicole Kennison (pictured), 31, appeared in the court on Monday March 26 after pleading guilty to manslaughter over the 2016 death of her child 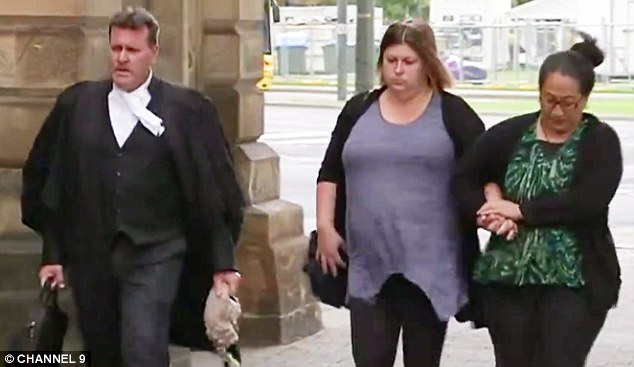 ‘There is nothing else to suggest that this is a bad parent,’ he said.

‘She is not charged with intentionally killing the child.’

Mr Wickens also told the court, according to Nine News, that Kennison is an ‘otherwise loving mother who is also a victim of her own offending. She has lost her child and that is something she will carry for the rest of her life.’

But prosecutor Emma Wildman said Kennison, a former childcare worker, showed no remorse and put her own interests ahead of the child’s.

‘Whilst the defendant called triple zero and she herself administered first aid, she did not provide an accurate history of events to any person who was rendering medical assistance on that day,’ Ms Wildman told the court.

‘She made one brief mention of shaking to a nurse… but to no paramedic, to no medical practitioner at any hospital did she provide an honest account of the shaking.’

Ms Wildman said Kennison’s actions were not consistent with a mother who had a momentary lapse, instead suggesting she knew she had done something wrong and tried to protect herself from an early stage.

Nine News reported that Kennison realised a prison sentence was warranted but asked the court if it could be served as home detention.

She allegedly delayed court proceedings to have a psychological assessment but a doctors report found that she had no cognitive difficulties, showed no signs of post-natal depression or drug abuse and had no contact with child protection agencies, the court was told according to the news program.

The court also learnt that Kennison still has custody of one of her children.

Justice David Lovell continued Kennison’s bail ahead of her sentencing in April.