A mother who suffered six miscarriages kept her pregnancy a secret for nine months so she wouldn’t jinx its success.

Amy Whatley, 28, and her husband Vincent, 37, suffered six devastating losses over four years while trying for their fourth child.

The cause was never understood, and the couple learnt to accept their dreams of having another baby were over.

When Mrs Whatley fell pregnant in March 2019, the pair decided not to tell anyone in case the pregnancy ended in heartbreak again.

Mrs Whatley, from Newbury, Berkshire, managed to keep the pregnancy a secret from everyone apart from immediate family as she passed every month.

She covered herself with baggy clothes so friends and colleagues didn’t spot her growing bump – and incredibly, no one suspected a thing.

In November 2019, Mrs Whatley gave birth to a healthy baby girl who she decided to call Hope as a reminder of the journey her family had gone on.

Amy Whatley, 28, managed to keep her pregnancy hidden for nine months so she wouldn’t jinx its success after suffering six miscarriages. She is pictured with her baby, Hope 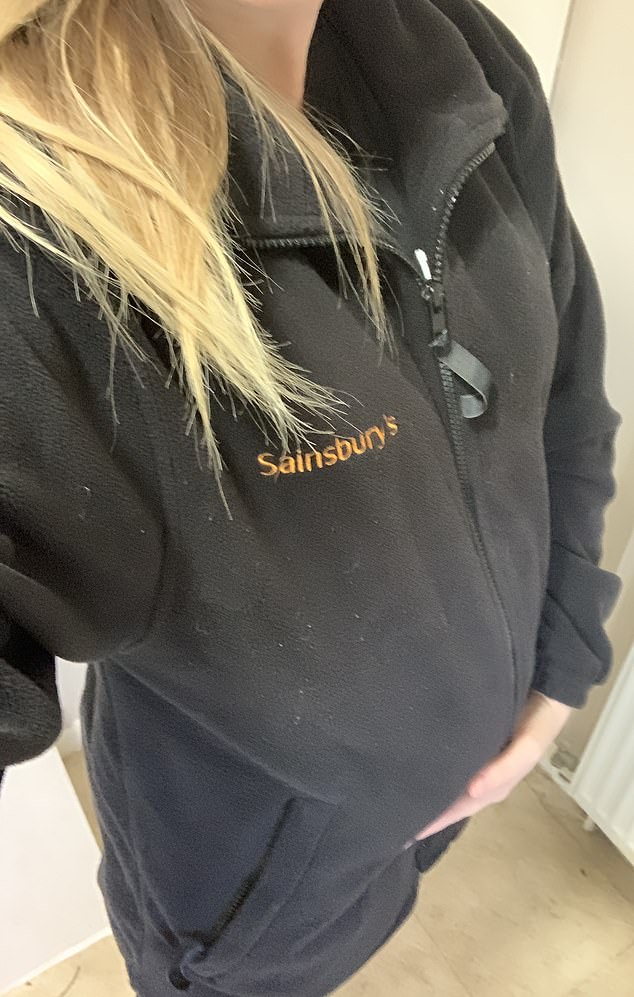 Mrs Whatley covered herself with baggy clothes so friends and colleagues didn’t spot her growing bump. She is pictured in a large jacket at her job where her bump is visible 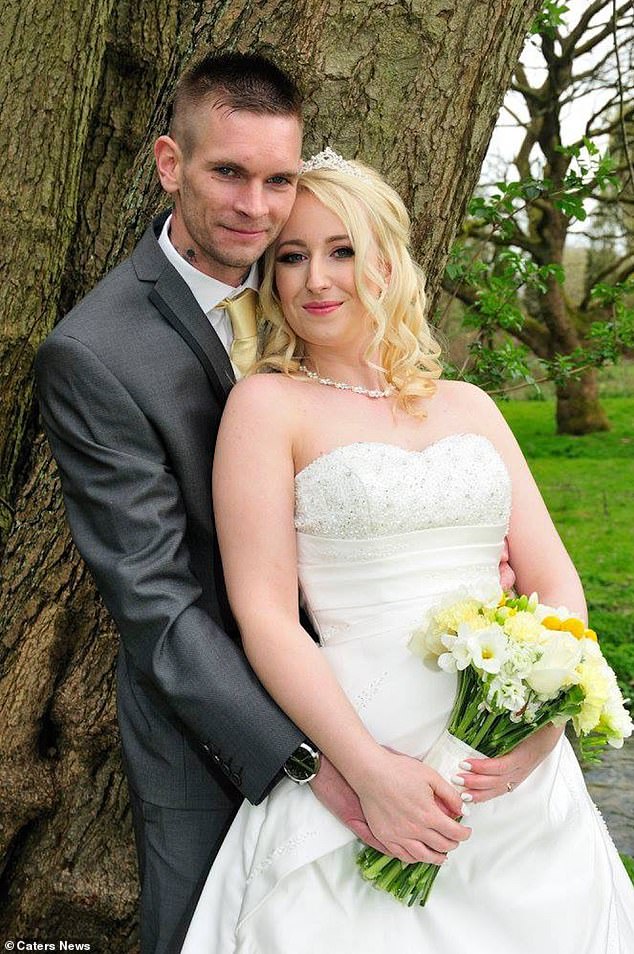 Mrs Whatley and her husband Vincent, 37, suffered six devastating losses over four years. They are pictured on their wedding day and have three other children

Mrs Whatley, a retail sales assistant, said: ‘We revealed Hope’s arrival by posting a video on Facebook showing pictures of her and pictures of some baby scans and it explained the whole story to our friends and family.

‘There was a lot of crying- especially from my family and other mothers who had had a miscarriage.

‘People couldn’t believe that I had managed to hide it for this long but they were so happy for us.

‘I wanted to keep it a secret. I couldn’t deal with anymore loss and after posting my last pregnancy on social media and then losing the baby, I didn’t want the same thing to happen again.’

She they suffered a further four early miscarriages in quick succession. ‘Recurrent miscarriages’ is a medical issue defined as the loss of two or more consecutive pregnancies.

Around one in 100 women are thought to suffer three in a row. The reasons why are not always clear.

Mr and Mrs Whatley were thrilled when in early 2017, they fell pregnant again and a 12-week scan revealed the baby was doing well.

Convinced they had passed the ‘danger point’ of 12 weeks pregnant, Mrs Whatley announced her pregnancy to the world.

She said: ‘I was thrilled and put it on social media for all to see.

‘But just four weeks later, I had to post again and tell everyone we had lost the baby.

‘That was the reason why I decided to keep our next pregnancy a secret from everyone. I couldn’t go through it again.’

The devastated couple named their baby Harper, and still celebrate her birthday every year. 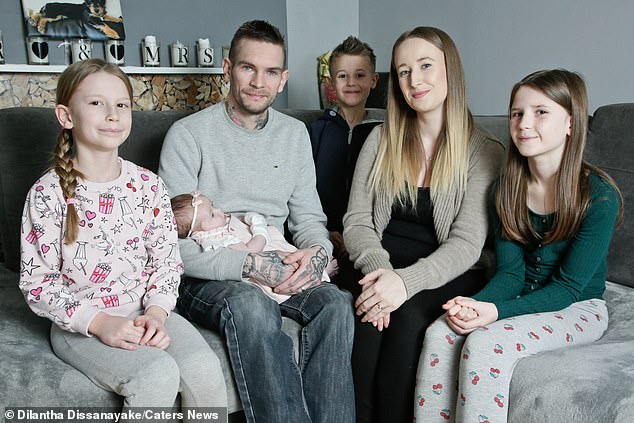 The couple, who already have children, Sky, 10, Lola, 8 and Levi, 7, began trying for a baby to complete their family in 2016. They are pictured with Hope who was born in November 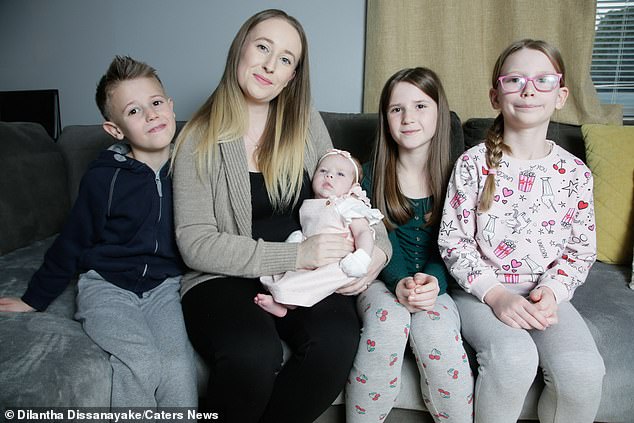 Mrs Whatley said: ‘I wanted to keep it a secret. I couldn’t deal with anymore loss and after posting my last pregnancy on social media and then losing the baby’ 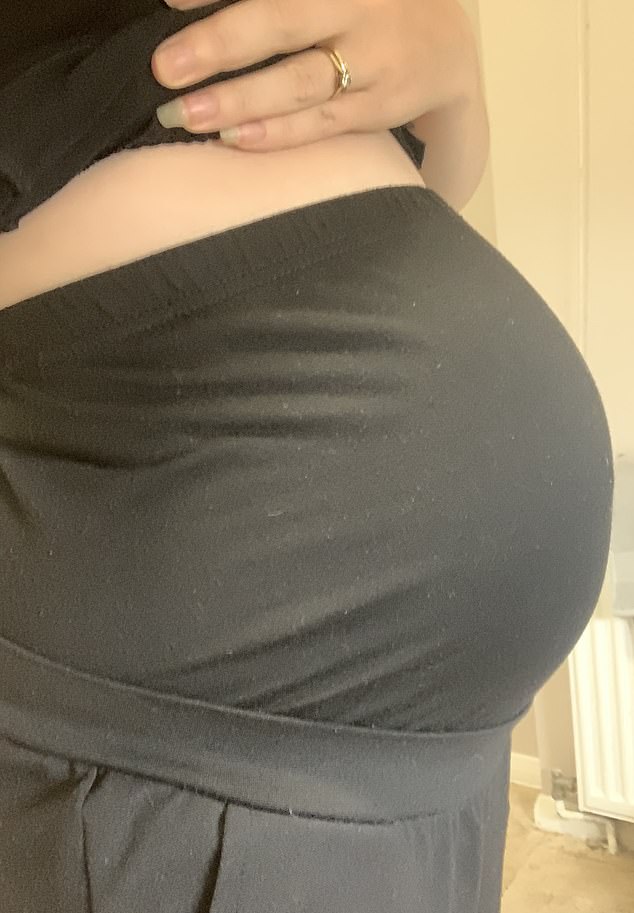 Mrs Whatley, pictured showing her bump which was usually hidden under her clothes, said: ‘If I had a different job, I probably wouldn’t have been able to hide it’

Mrs Whatley said: ‘I had three other children to look after. They kept me going but if I didn’t have them, I would have had a complete breakdown’.

After the miscarriage, Mr and Mrs Whatley’s lives were turned upside down.

The couple had tests to try and determine the cause of Harper’s death at 16 weeks. It was due to a lack of oxygen reaching the baby.

But they said they are still in the dark about why Mrs Whatley suffered so many miscarriages beforehand.

Mrs Whatley had to quit her job as a result of the trauma due to not being able to take enough time off to grieve.

Eventually. Mrs Whatley and Mr Whatley, a self employed scaffolder, had stopped trying for a baby and had given up all hope.

But one day in March 2019, out of the blue, Mr Whatley thought his wife might be pregnant. She took a pregnancy test which confirmed it.

This time round, Mrs Whatley wanted to keep her pregnancy a secret due to fear she would have another miscarriage.

She said: ‘I started wearing big coats and at work I would wear over-sized uniform so that no one would know I was pregnant. I managed to get to 30 weeks without anyone questioning it.

‘I’ve never been a drinker so if I didn’t drink- it wasn’t questioned.

‘My morning sickness was a bit difficult to hide at work but luckily I usually work on my own so I was able to keep dashing off to the loos. 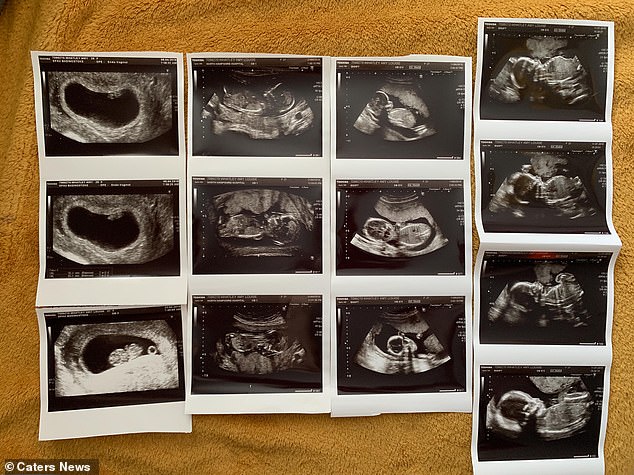 One day in March 2019, out of the blue, Mr Whatley thought his wife might be pregnant. She took a pregnancy test which confirmed it. Pictured, Hope’s scans 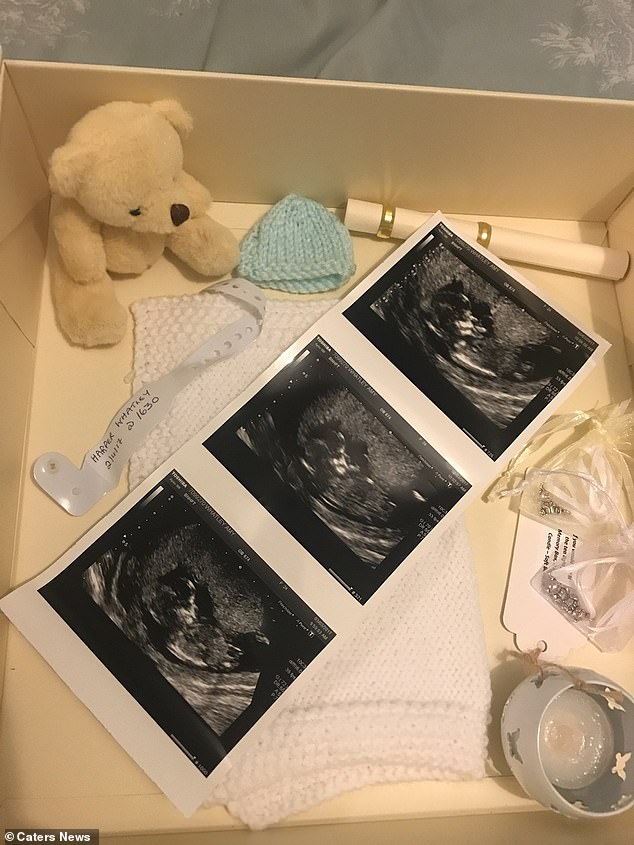 Mr and Mrs Whatley were thrilled when in early 2017, they fell pregnant again. A 12-week scan revealed the baby was doing well. But sadly, they lost the baby four weeks later. The devastated couple named their baby Harper (pictured, a memory box for her) 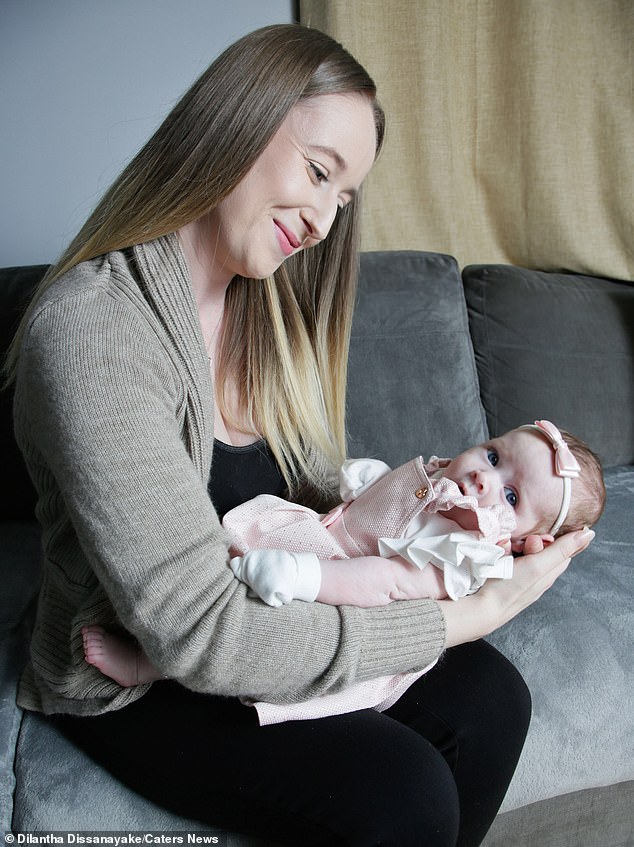 Mrs Whatley, pictured with Hope, said: ‘When I gave birth to Hope, it didn’t feel real. How could I finally have the baby I had always dreamed of?’

HOW COMMON IS MISCARRIAGE?

One in four women will lose a baby during pregnancy or birth, according to the charity Tommy’s which funds research into this area.

One in six pregnancies in women who know they are pregnant become miscarriages.

But even more happen among women who don’t know they have conceived.

Miscarriage occurs when a pregnancy is lost within the first 23 weeks after conception.

The main symptoms are bleeding from the vagina, which may be accompanied by lower abdominal pain.

There are various reasons women may have a miscarriage – it is common and is not usually caused by something they have done.

If a miscarriage happens in the second trimester – between weeks 14 and 26 – it may be a sign of an underlying problem.

Often, miscarriages are isolated events and women will go on to have successful pregnancies.

The majority of miscarriages can’t be prevented, although being generally healthy will help reduce the risk.

Losing three or more pregnancies in a row – known as recurrent miscarriages – is uncommon but still affects around one in 100 women.

An estimated five per cent of women experience two consecutive miscarriages and one per cent have three or more.

‘I also had to inject myself with blood thinners at work so I had to sneak off to do that but sometimes I would bleed badly from it so I would be constantly worrying that people would notice.

‘If I had a different job, I probably wouldn’t have been able to hide it for so long.’

Having suffered six devastating losses, Mrs Whatley was on edge during her whole pregnancy.

She said: ‘We lived in constant fear of losing the baby. I couldn’t relax and enjoy the pregnancy because I was so terrified of what might happen again.

‘I would go to the toilet every 30 minutes to check if I was bleeding and my husband was also worried.

‘When I gave birth to Hope, it didn’t feel real. How could I finally have the baby I had always dreamed of?

‘For two weeks, I wouldn’t leave her alone. I was so scared I just wanted to be with her at all times to make sure she was okay because it didn’t feel real.

‘I couldn’t believe she was here and she was healthy.’

The birth of Hope was also a reminder of Harper, Mrs Whatley said.

‘It made me relive the whole miscarriage again because it just made me wonder what Harper would have been like.

‘I’m so grateful for my miracle baby defeating all the odds.

‘Now we finally have our big family and I couldn’t be happier.’