Mother who was bullied for having a unibrow embraces natural look

A mother of three who was bullied relentlessly for having a unibrow has finally ditched the tweezers in a bid to inspire her children to embrace their own natural looks.

Shari Loeffler, 38, first decided to pluck her eyebrows aged 13, after being tormented at school about the way she looked.

For the next 24 years, the artist, from New York, continued hiding behind two eyebrows—until the summer of 2017, during which she worked alongside her children at a Farm in Long Island.

Owning it: Shari Loeffler, who was bullied relentlessly for having a unibrow, has been inspired by her third child to ditch the tweezers and embrace her unique look 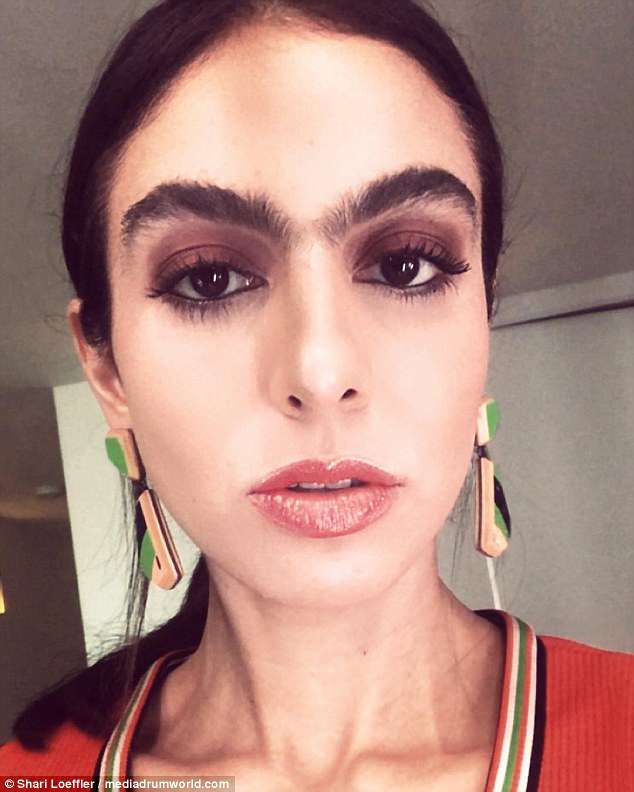 Past: The artist first decided to pluck her eyebrows aged 13, after being tormented at school about the way she looked 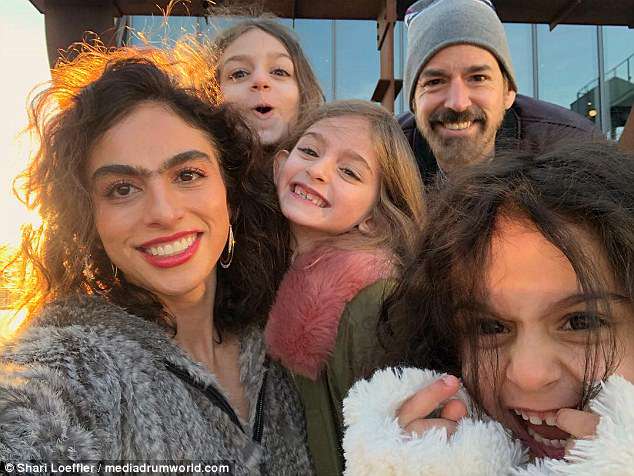 Family: It wasn’t until the mother (pictured with her husband and three children) gave birth to her youngest that she changed her outlook

The immersion in nature sparked many internal explorations, her beauty routines being one of them. She decided to embrace her natural look and stopped tweezing and shaping her eyebrows for the remainder of the summer. The seeds of acceptance were planted.

Shari’s memories of being bullied about her unibrow date back to her childhood.

‘When I was ten years old, I was at my cousin’s birthday party, I was surrounded by a group of boys who were two years older than me,’ she said.

‘When they saw me, I could see some of them whispering and laughing at my appearance and I remember at one point a handful of boys started to trace their own eyebrows and have it crawl down their face and then up their legs and arms as if it was a symbol of my hairiness, like a railroad track all over my body.

‘That hurt so much—it was just a reminder to me that when I’m exposed to new people and environment and they don’t know my true self, that is the reaction that I can get from people.

‘I was born and raised in America, I’m of Persian descent and as a young child I felt quite lonely and sad about the fact that I had a unibrow because I didn’t really know anyone outside of my family who looked like me.

‘I didn’t really have any role models or examples in the media that visually represented the way I looked, so it made me feel quite different. I felt at that young age that I did not look normal.’ 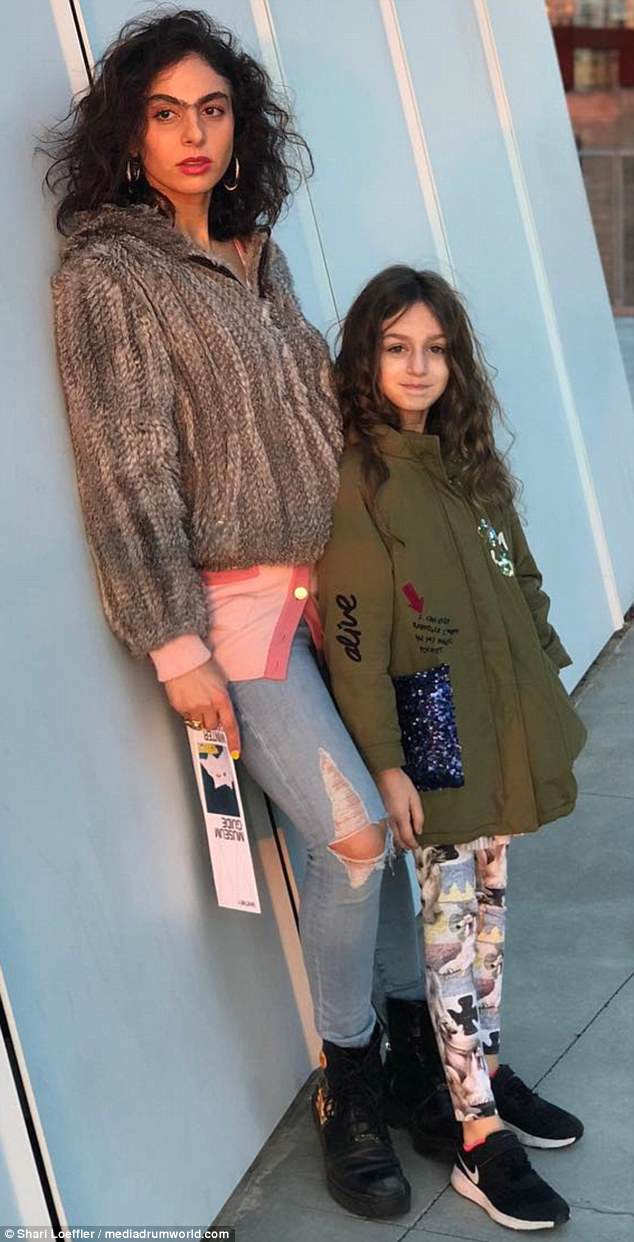 Thinking: Shari (pictured with her eldest daughter) reframed her thoughts regarding her unibrow after beginning to think about how she could be a role model for her children 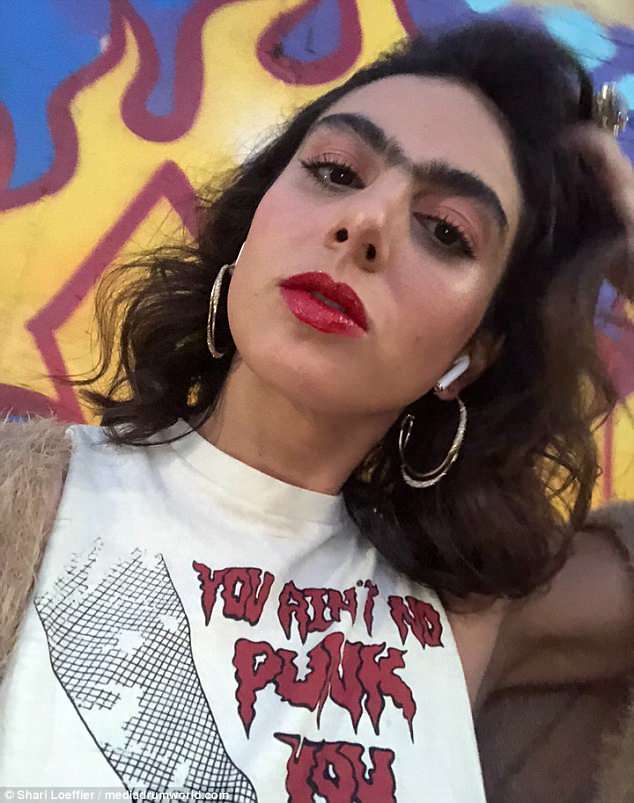 Struggles: As a girl, Shari started plucking her unibrow after her school peers tormented her about her physical appearance 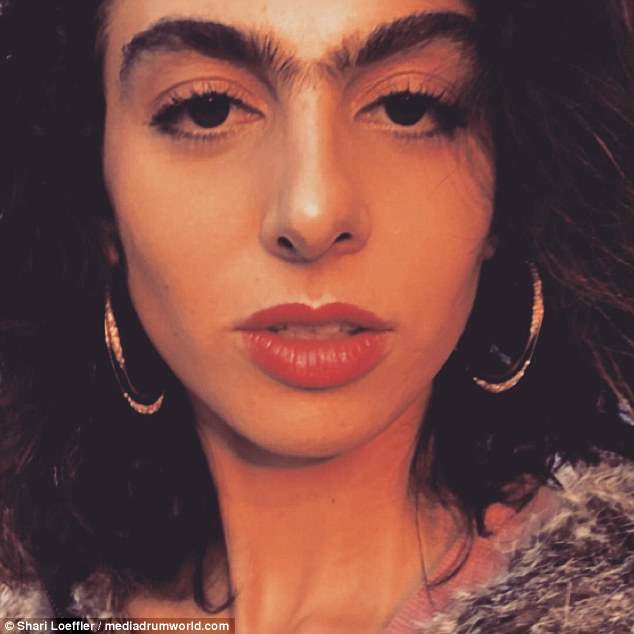 Embracing it: In an attempt to encourage her children to embrace their natural look, she decided to accept her own

When Shari was 13, after her family moved to Florida, she prepared to meet her new classmates. One day, just before her basketball practice, she said she ‘basically turned to [her] mother and grandmother and said: “I must have my unibrow tweezed before I go to this new school.”‘

‘I refused to have this identity that plagued me so much follow me, so for the next 24 years I did what I could to strip away the stigma of my unibrow and hide from it,’ the artist added.

‘Fast forward to being a 37-year-old, a mother of three children and seeing how girls are portrayed in the media, I decided to make a positive impact for my kids and myself.

‘I started to re-examine my identity as a relation to beauty standards and time it took to create an image that I started to see as visually pleasing.

‘How do I want to accept myself? Why do I feel compelled to look a certain way? How do I want to be a role model to my children? As a result, I stopped tweezing my eyebrows.

‘When summer ended, I was approached by an artist who wanted to paint my portrait for her upcoming show, and it made me begin to question why? If she wanted to paint my thick eyebrows and she thought that they are beautiful, why do I not find them beautiful?

‘So, it dawned on me in September 2017 that I needed to grow out the rest of my unibrow, so I could sit within that initial awkwardness. Then I could stare at it, look at the face that I was born with, and learn to accept it and really embrace myself for who I am.’ Appearance: Shari once feared that her youngest daughter, too, would be teased for her looks, because she has inherited some of her mother’s features 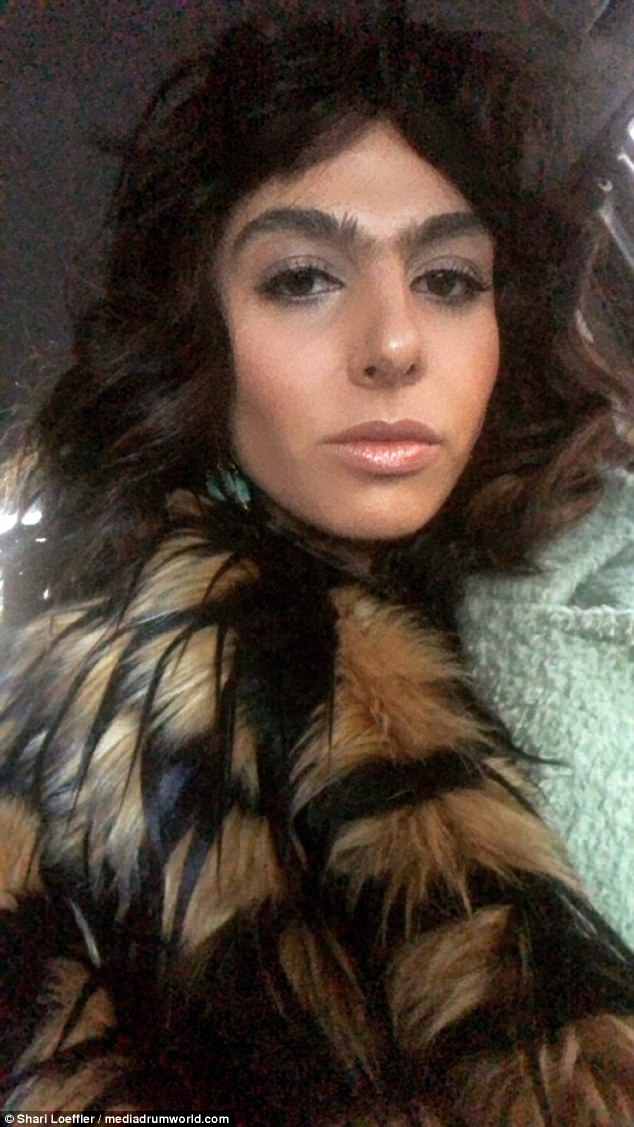 Sharing: The mother has now created an Instagram account where she shares photos of herself in a bid to reclaim her unibrow and to celebrate her natural look

Shari explained that it wasn’t until she gave birth to her youngest that she started to re-examine her identity.

Her daughter had apparently inherited some of her features, and it seemed likely that she would also have a unibrow, prompting the mother to fear that her youngest, too, would be teased for her looks.

In an attempt to encourage her children to embrace their natural looks, she decided to accept her own.

‘With my first two children, because they are quite fair, like blonde hair blue eyes, I remember thinking wow they don’t have to deal with a unibrow,’ Shari said.

‘That’s how much it bothered me that I actually saw my children and thought “Oh, OK, they’ve dodged a bullet, they don’t have to deal with the same trauma”, so to speak.

‘With my baby, she looks a lot like me, so with her, I remember thinking “Wow, she resembles me and my coloring, so maybe she will have to deal with it.”

‘At 34, I wondered how I was going to parent about this, what I could do to help her not feel bad about her appearance, but I didn’t have any answers then. I think it took me a few years and also being submerged with creatives; artists, writers, musicians, dancers, curators, educators, which provided me with a sounding board to explore many of these concepts about myself.

‘In the art community, many create art out of examining their own identity, and for me there is such power in positive friendships and supportive environments where this work can be done.’ 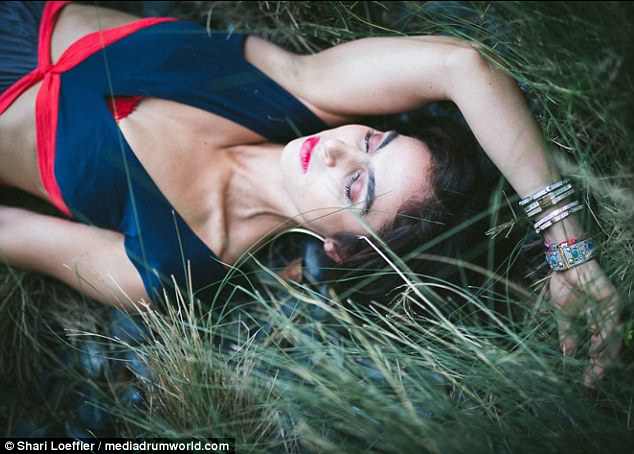 Message: Her account, @myfiercebrow, has resonated with people between the ages of 18 and 35 who have faced similar insecurities and who have felt inspired by her journey 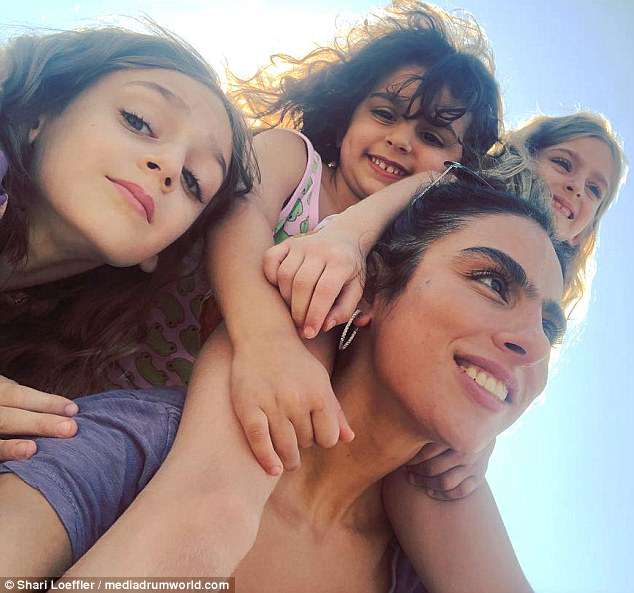 Rocking it: ‘What is more empowering for me as an adult is to see that evolution in my children,’ Shari (pictured with her three kids) said

The mother has now created an Instagram account where she shares photos of herself in a bid to reclaim her unibrow and to celebrate her natural look.

Her account, @myfiercebrow, has resonated with people between the ages of 18 and 35 who have faced similar insecurities and who have felt inspired by her journey.

‘One girl said to me; “I admire your mindful words so very much. I have an Arab background, I have struggled with thick eyebrows and body hair my whole life,”‘ Shari read.

‘I feel like there is finally an outlet for my body positivity that is related to me. You really make me proud of who you are and who I am. Keep promoting the message, we will get there in the end.’

Shari has also inspired her children to love themselves at young ages.

‘My middle daughter is very fair, just after my account was created, she felt inspired to write a book and one page is all about how the unibrow comes in all shapes and sizes,’ she said.

‘She tells me that she traces her eyebrows and her invisible blonde unibrow daily because she feels connected to me. I never thought in my life that a unibrow is something that my children would want but they all want one now, because I think they see it as a source of strength for me, not a weakness.

‘What is more empowering for me as an adult is to see that evolution in my children. You may not look like everyone else, but you can rock it.’