A mother-of-four was told she had just two hours to live after going to the doctors for a routine check-up.

Kay Dewhurst, 45, from Marlborough, Wiltshire, went to her regular hospital appointment, after being born with holes in her heart.

However, she was shocked when the specialist told her that her heart was failing, and that she should say her goodbyes to her family.

Kay Dewhurst, 45, from Marlborough, Wiltshire, (pictured in hospital) was told she had just two hours to live during a regular check-up for her long-standing heart condition

The doctor told Kay her heart was functioning at just 10 per cent of its capacity, and that it was a miracle she was still alive.

Incredibly, she managed to survive for months while waiting for a heart transplant, undergoing a life-saving operation in April this year.

Speaking to the Daily Star, Kay – who has four children, Danielle, 28, Kane, 19, Charlotte, 18, and Corbyn, eight – explained how she had open-heart surgery at the age of six, after being born with holes in her heart, or septal defects. 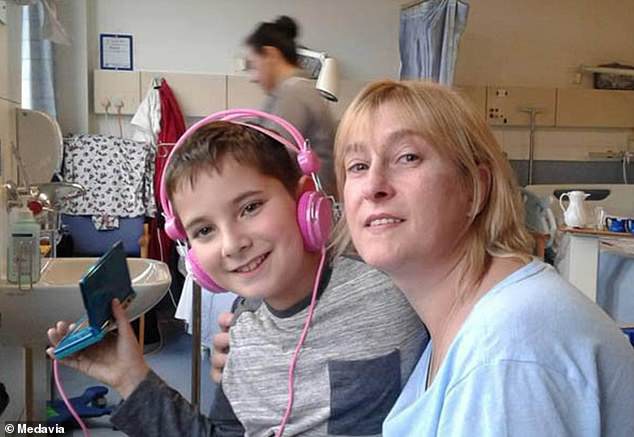 Kay (pictured with youngest son Corbyn) incredibly managed to survive for months while waiting for a heart transplant, undergoing a life-saving operation in April this year

However, she didn’t have any problems until last June, when she went for her five-yearly check-up.

WHAT IS A SEPTAL DEFECT?

A septal defect is where there’s a hole between two of the heart’s chambers.

The exact cause of congenital heart defects is often not clear.

Most heart problems in children are present from birth due to an anomaly in the way the heart forms during the very early stages of pregnancy.

The defect causes an abnormal flow of blood from one chamber to the other, meaning that the oxygen-rich and the oxygen-poor blood are allowed to mix and flow from the heart to the body and lungs.

‘In all the years I had been monitored, doctors had never found anything wrong. My appointment felt like more of a friendly catch-up than anything,’ she said.

‘But this time, I was called into the consultant’s office and I knew something was wrong.  He said “There’s no easy way to say this. Your heart’s failing. You have two hours left to live”.’

Kay’s husband Mark quickly called family members to tell them the devastating news, with their eldest three children arriving at hospital to say their goodbyes.

However, Kay miraculously managed to survive the night, with doctors at Great Western Hospital in Swindon deciding to put her on the waiting list or a heart transplant.

A match was only found for her in April this year, when she underwent a life-saving operation.

Three weeks later, she was allowed to go home to family, and is currently recovering well.

Kay said: ‘I still can’t believe I nipped into hospital for my five-year check-up and left nearly a year later with a new heart.’