Mother with Dr Pepper addiction wishes she was ‘still fat’

An obese mother who guzzled 20 cans of Dr Pepper a day says she wishes she was ‘still fat’ – after being left with two stone of saggy skin following her weight loss.

Nicky Codrai, 42, from Rotherham, south Yorkshire, ballooned to a whopping 25st 3lbs thanks to her extreme Dr Pepper addiction.

The mother-of-eight managed to shed an incredible 12 stone simply by giving up the sugary drink, and now weighs 13st 5lbs.

But despite now being a size 10 to 12, she says she has been left crippled with insecurity due to the layers of excess skin around her body – which has left her ‘feeling like an 80-year-old’.

Nicky Codrai, 42, from Rotherham, south Yorkshire, says she sometimes wishes she was ‘still fat’ after being left with two stone of excess skin following her dramatic weight loss 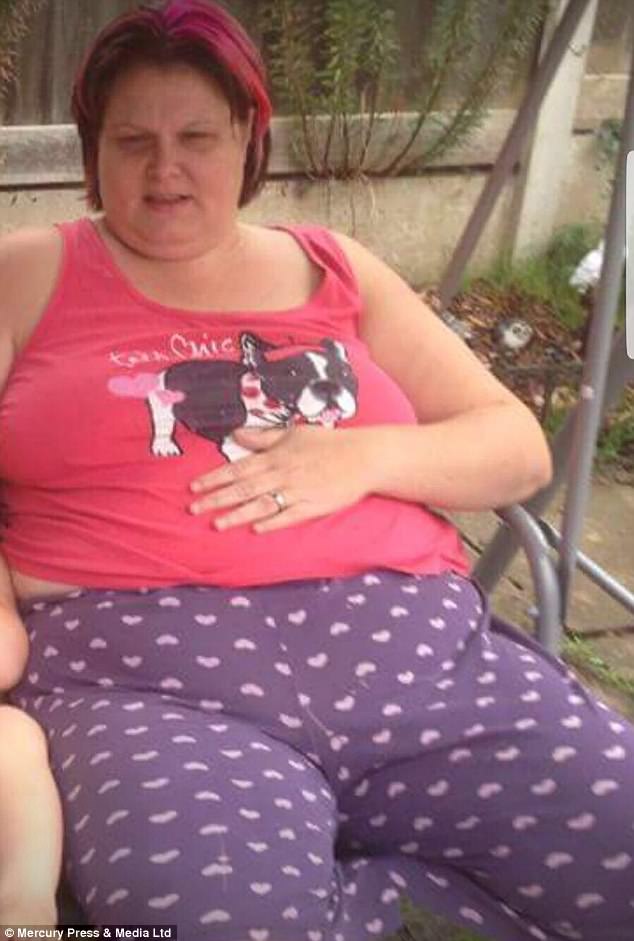 Explaining how she piled on the pounds, Nicky said she became ‘hooked’ on Dr Pepper during her 20s.

‘I was drinking it like there was no tomorrow, I was so addicted I would drink 20 cans a day and just eat one meal,’ she said.

‘Before I knew it I was over 25st. I didn’t realise what was happening until it was too late. Nobody ever said to me “wow, Nick, you’ve got massive” so I just assumed I was okay.’

Nicky said she only decided to make a drastic change after watching the film What’s Eating Gilbert Grape, which features a family who are forced to burn their dead mother in their home as she is too big to move. 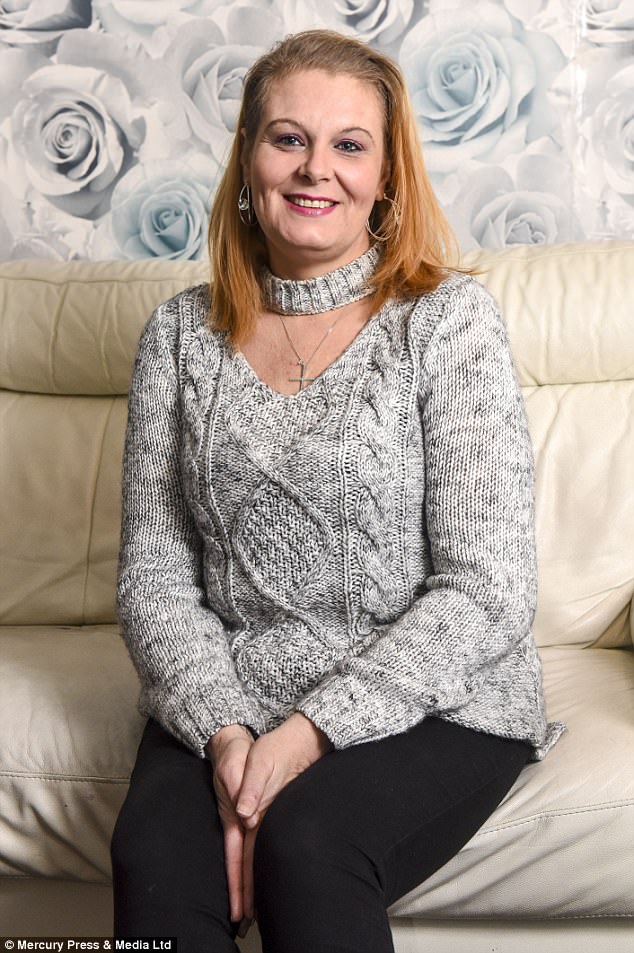 ‘I was huge. I could only wear frumpy clothes, I was struggling to get around and with my breathing. My doctor told me if I didn’t lose weight I’d be dead,’ she explained.

‘That should have been enough motivation but it wasn’t until I watched the house burning scene in What’s Eating Gilbert Grape and I realised I just couldn’t do that to my kids or my husband.

‘I woke up the next morning and instead of having a can of Dr Pepper, I threw them all in the bin. I went cold turkey.

‘The first few weeks I was really moody and grumpy but the weight started to drop off.’

Despite being ‘proud’ of her incredible weight loss, Nicky has been left unhappy with her body due to the two stone of excess skin that remains – and says she sometimes wishes she was ‘still fat’. 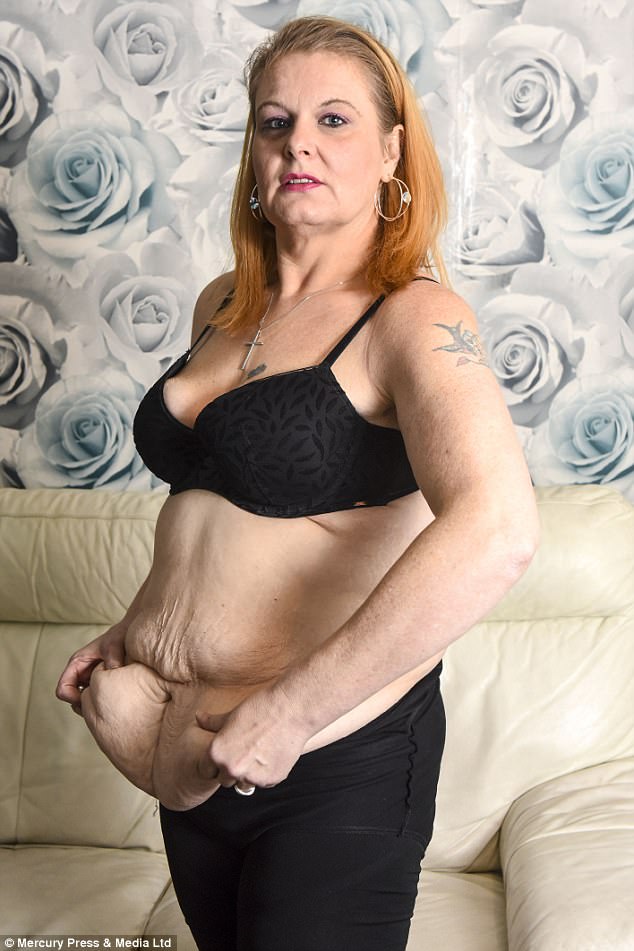 Despite giving up her dangerously unhealthy habit, Nicky has been left crippled with insecurity about the excess skin around her body

‘With my clothes on I feel like a million bucks and losing weight is the best thing I’ve ever done – then I see myself in the mirror without my clothes on and it’s the worst,’ she explained.

‘When I look at myself and see all the loose skin I wish I was still fat. I look like an 80-year-old.

‘I’m so insecure about it, I won’t even let my husband see me get undressed.. He tells me I look gorgeous but to me I don’t.’

Nicky continued: ‘Where the skin hangs it has started to go brown because it is dead and I get infections which leave scars. When I move it slaps around and it is so painful. I have to wear a bodysuit like a wrestler to hold it in place.

‘All the saggy skin requires a lot of care. Sometimes I have to bathe six times a day and then I have to put on cream and talc.’ 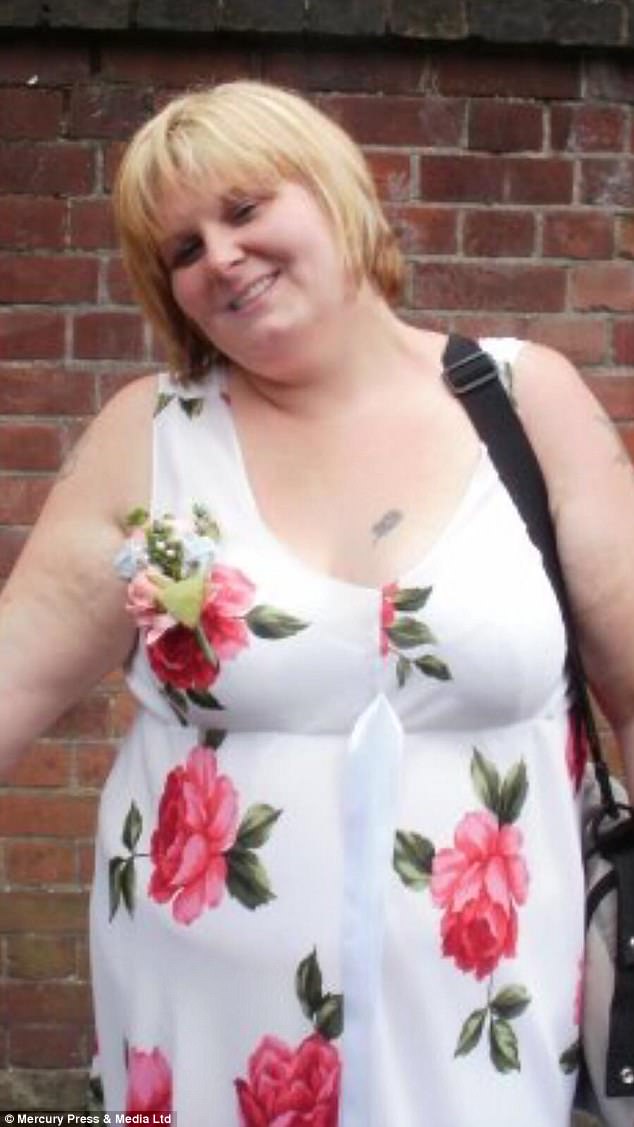 Nicky said she became ‘hooked’ on Dr Pepper when she was in her 20s, when she would drink it ‘like there was no tomorrow’ 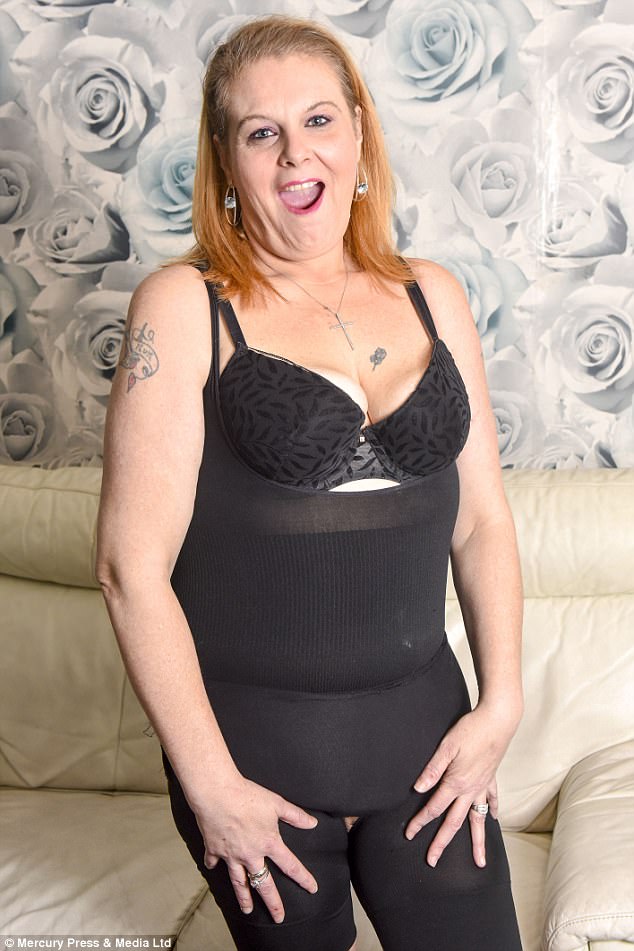 … and her diet now

Breakfast: A bowl of porridge (171 calories)

She says she is now saving up for surgery to remove the excess skin, but says she is encouraging others not lose weight in the meantime unless they can have the procedure done.

‘I tell everyone who asks me about losing weight not to do it unless they can afford the [excess skin removal] surgery,’ she said.

‘Getting rid of this skin would mean the absolute world. I want to be able to look at myself and feel happy and confident. I just want to be normal.’

Despite her insecurities about the excess skin, Nicky says that her weight loss has given her a new lease of life.

Previously, the grandmother – who has four sons and four adopted daughters with her husband Jason Codrai – struggled to find clothes that fit her bulky frame and was forced to buy 48DD bras and attach three band extenders. 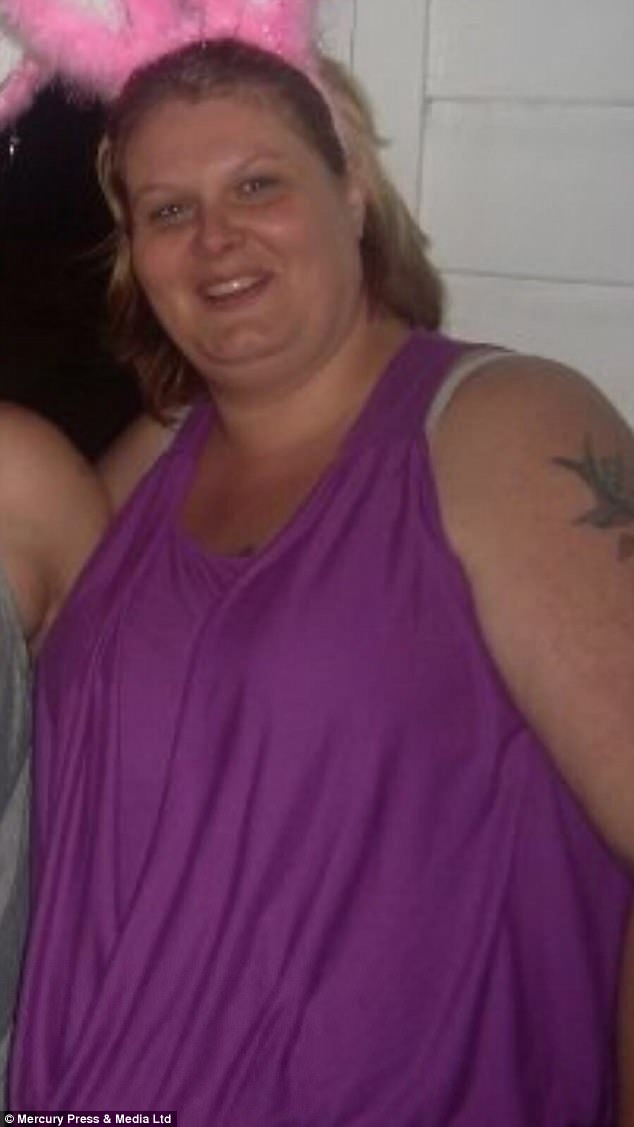 She found that she was left exhausted by simple chores while living off one evening meal and  6.8litres of Dr Pepper a day for two decades.

As well as going cold turkey on her fizzy drink addiction in 2014, Nicky tried different fad diets but found that none of them worked.

Instead in 2015, determined Nicky decided to do things her way eating whatever meals she wanted but on a children’s plate and turning chores like vacuuming and doing the dishes into fat-busting workouts.

Nicky, who can now slip into whatever clothes she wants to, said she would not have been able to do it without the encouragement of Jason, 47, her childen and her doctor. 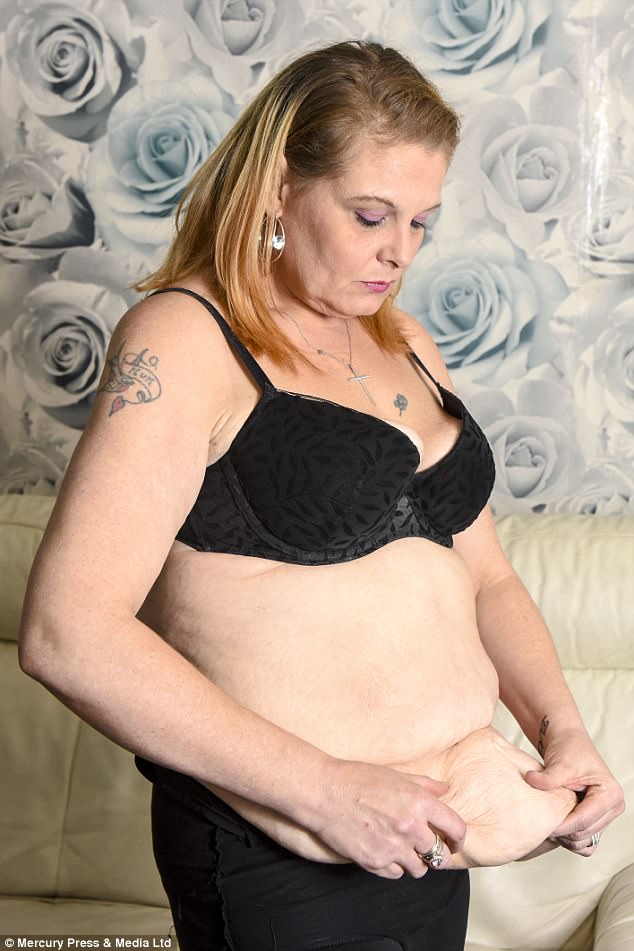 Despite being proud of her weight loss, the mother says she now won’t even let her husband see her get undressed 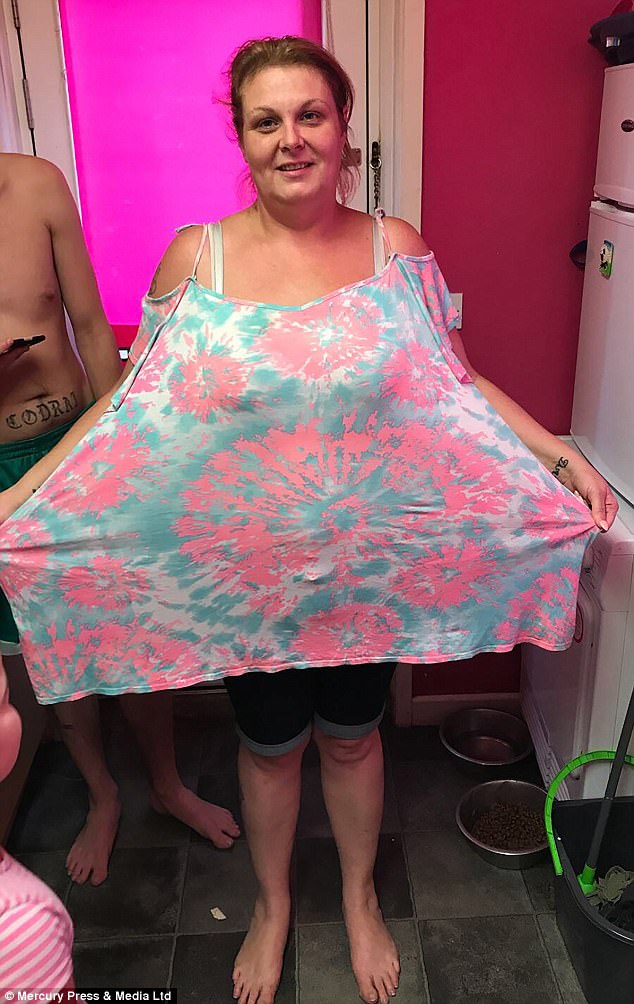 However, Nicky says that she has a lot more energy after managing to shed the pounds

‘I did every diet you can imagine and none of it was helping. The doctors offered me a gastric band but Jason had done some research and he begged me to try to do it on my own,’ she explained.

‘So I decided if I was going to do it, I was doing it my way. I cut out the fizzy drink and I went out and bought a small kids’ size plate and started eating everything off that but I eat whatever I want.

‘I never went on a diet. I still have takeaways, I still eat out but that plate goes everywhere with me so I’m having smaller portions – little and often.’

She continued: ‘I also never went to the gym. They suggest all these exercises and when you’re big they just make you feel bad because your body doesn’t bend that way.

‘Instead I turned my daily chores into exercise and just really had fun with it. I dance around and shake my bum while I’m vacuuming, if I go to the loo I bend down and touch my toes ten times first. 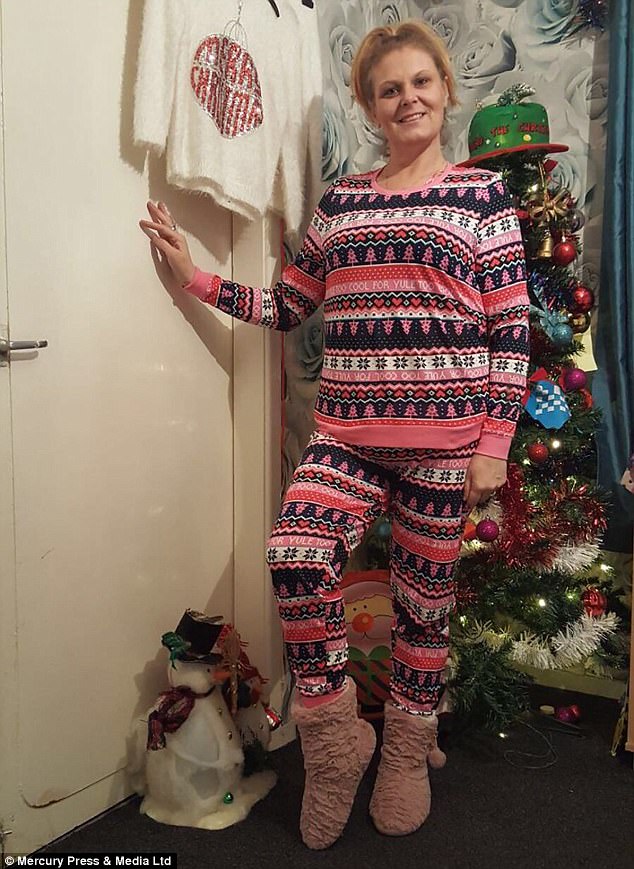 The mother-of-eight, who now fits into a size 10 to 12, says she is happy knowing how much healthier she is

‘When I go to the supermarket, I don’t dawdle around like other mums, I try to get round as fast as possible. It’s all about just having fun and getting moving.’

Nicky says she has a lot more energy following her weight loss, explaining: Before I always felt like I’d done loads and I was exhausted at the end of every day but I’d done a lot of nothing, it was just my weight tiring me out.

‘I was depressed and I didn’t like leaving the house because I only had three outfits that fit.

‘I would get embarrassed when I went out with the kids because I was too fat for rides and couldn’t run around. 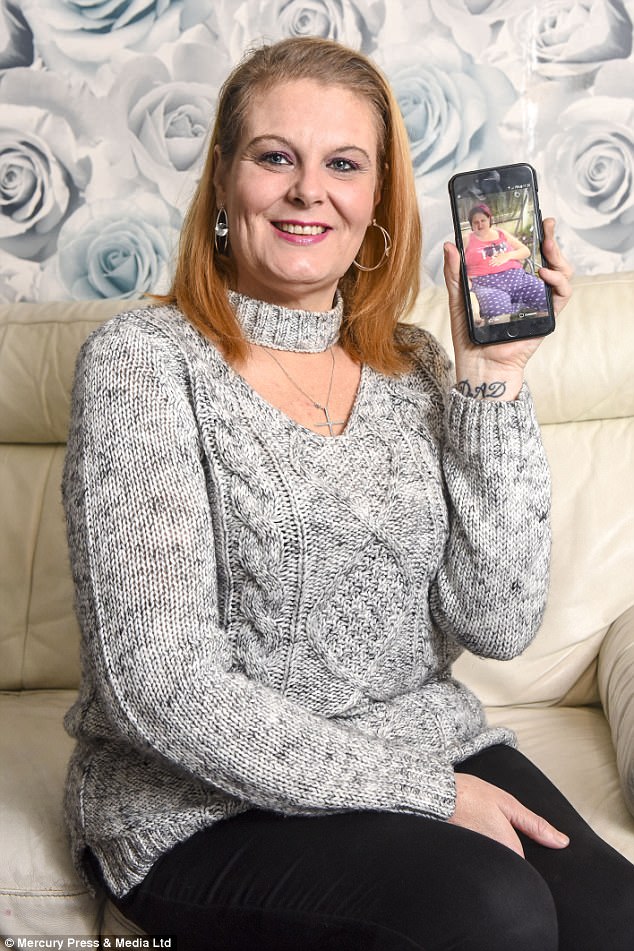 However, she says that she urges other people not to lose weight unless they can afford excess skin removal surgery

Nicky says she is now saving up to have the procedure, adding that her excess skin is the only thing that is preventing her from living her life to the full

‘Now I’ve got so much energy, I charge around doing all the housework and dance about and then I’ve still got the energy to play with the grandkids.’

She added: ‘People make excuses and say they don’t have time to exercise but I want to show every big woman out there that they do have time and they can enjoy getting fit.

‘I am so happy knowing how much healthier I am and that I will be around longer for my family and getting my surgery would be the perfect reward for all the hard work.’

However, Nicky says her excess skin is the only thing that is preventing her from living her life to the full.

‘Now I just need to get all this skin removed. I don’t want to hide my body from my husband, I want to wear shorts. The skin is the only thing holding me back,’ she said.