Mother with the flu hospitalized with flesh-eating disease

A mother-of-three is fighting to survive a flesh-eating disease she caught after coming down with the flu.

Christin Lipinski, of Arizona, has now been in intensive care for more than a week, and doctors have removed entire chunks of her arm to beat the bacteria which has ravaged 30 percent of her soft tissue.

The disease took hold just days after special ed teacher Christin was diagnosed with influenza, which she treated at home.

Just as she seemed to be recovering, her condition started worsening, with an intense pain in her armpit.

Eventually, her husband Nate called an ambulance to take her to the nearest trauma unit where she was diagnosed with necrotizing fasciitis, one of the most deadly flesh-eating bacteria.

Christin Lipinski, pictured with her children, is fighting for life against a flesh-eating bacteria in hospital in Arizona

Within 12 hours, Christin had undergone two operations to remove 30 percent of her soft tissue in a desperate bid to kill the infection.

Now, one week and seven surgeries later, Christin remains in intensive care as doctors keep finding new traces of the bacteria ravaging through her body.

Speaking to ABC News, Christin’s husband Nate said: ‘It felt like a horrible dream that I couldn’t wake up from.

‘To me, it has felt like a life-changing event and we haven’t even gone through the hard part yet.’

The family has set up a GoFundMe to help with the escalating medical bills and to support Christin after she is discharged, since she likely won’t be able to work.

On Sunday night Meredith Noce, the family friend who set up the fundraising account, told the hundreds of donors about Christin’s latest bump in the road.

‘We thought that we had turned the corner on the infection, however, the surgeon who specializes in this disease located some further diseased tissue and had to expand the wound further down her left arm,’ she wrote.

‘Christin’s prognosis is still good and she has made some slight gains through the week but there is still a long and uncertain road ahead.

‘Thank you everyone for your thoughts, prayers and continued support.’

As of Monday afternoon, the account had over $5,000 in donations, about halfway towards their $10,000 goal. 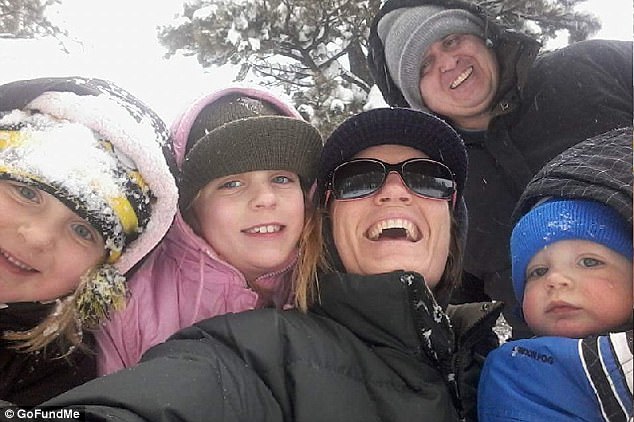