Mother woke from a coma thinking she was 13

An expectant mother whose heart stopped for 68 minutes as she was giving birth, woke from a coma two weeks later thinking she was 13 and had no idea she had two children and a fiancé.

One minute Shannon Everett, 22, turned and told her mother, Nicola Everett, 46, and fiancé Ioan she loved them and the next her heart stopped beating and she started severely bleeding, all while giving birth to baby Nico.

Shannon, who suffered an amniotic fluid embolism last September and delivered Nico while unconscious, was unable to hold her baby for almost two weeks as doctors put her in an induced coma to save her life.

Although her family were relieved when Shannon, who is also mother to three-year-old Mika, woke up, they were devastated to discover she thought she was a teenager and could not remember she is now a mother-of-two or has a fiancé.

After six weeks in hospital, Shannon, from Cwmbran in Gwent, South Wales, is recovering at her mother’s house, a half-an-hour bus journey from her fiancé and children, and is largely confined to a wheelchair, barely able to see anything.

Nicola said: ‘We went to the hospital that day in September expecting to come home with a new baby, but it’s like we have another child, too, because Shannon needs a lot of care.’

The family are fundraising to raise money towards Shannon’s care. 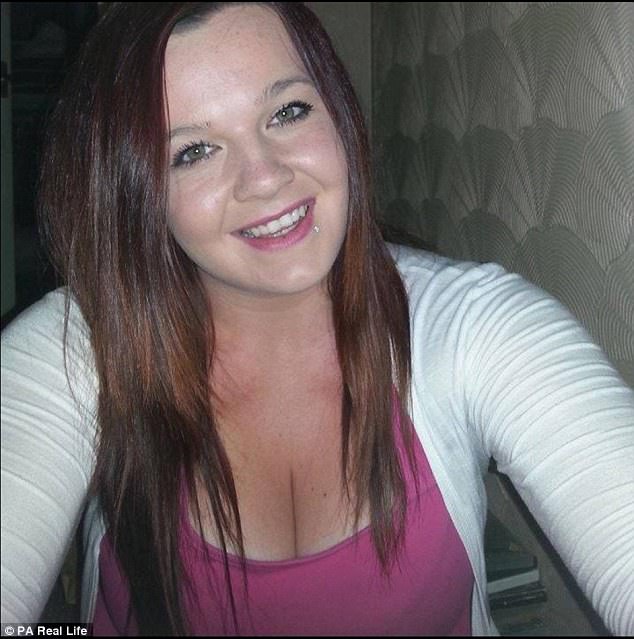 Shannon told her mother and fiancé Ioan she loved them, before losing consciousness 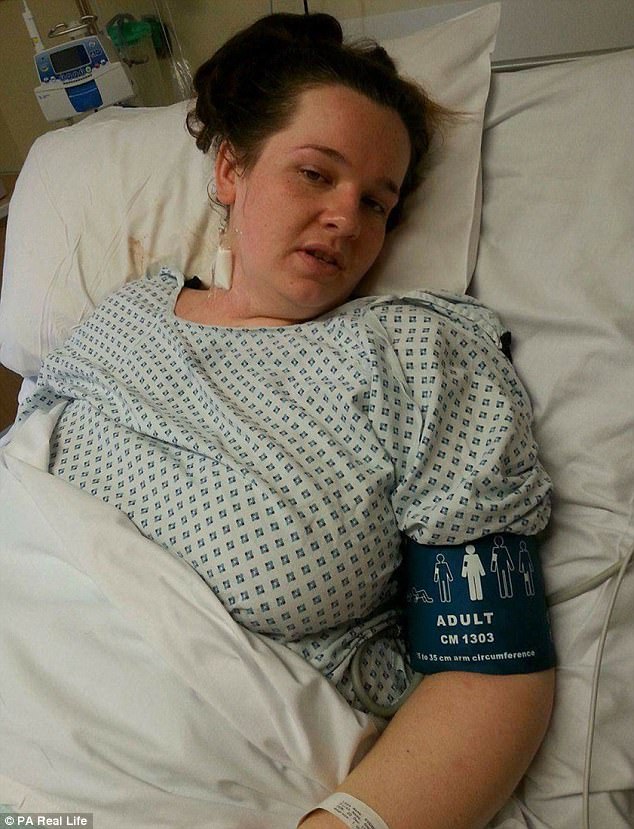 When she woke, she thought she was 13 years old and could not remember her children or Ioan

WHAT IS AN AMNIOTIC FLUID EMBOLISM?

Amniotic fluid embolism (AFE) is defined as the rapid collapse of a mother or baby due to an allergic-like reaction when amniotic fluid enters the mother’s circulation.

Its cause is unclear but may be a immune-system related response to pregnancy.

Treatment focuses on managing symptoms, including via blood transfusions.

While giving birth to baby Nico, Shannon told her mother and Ioan, who she was been with for six years, she loved them before her heart stopped beating and she lost consciousness.

After an astonishing 68 minutes, doctors were able to bring her back from the brink of death but warned her family she may not wake up or could suffer severe brain damage.

Shannon was put in an induced coma to help her recover from her ordeal and, nearly two weeks after giving birth, could finally hold baby Nico.

Yet, as well as being relieved, Shannon’s family were concerned as she reverted to a child-like state.

Nicola, a full-time carer, said: ‘She kept calling me “mammy” and when we asked her where she lived, she gave us the address for a house we’d lived in when she was 13.

‘She had no idea who her fiancé was and didn’t believe us when we told her she had two kids. It was like she’d forgotten her whole life and thought she was a teenager again.’ 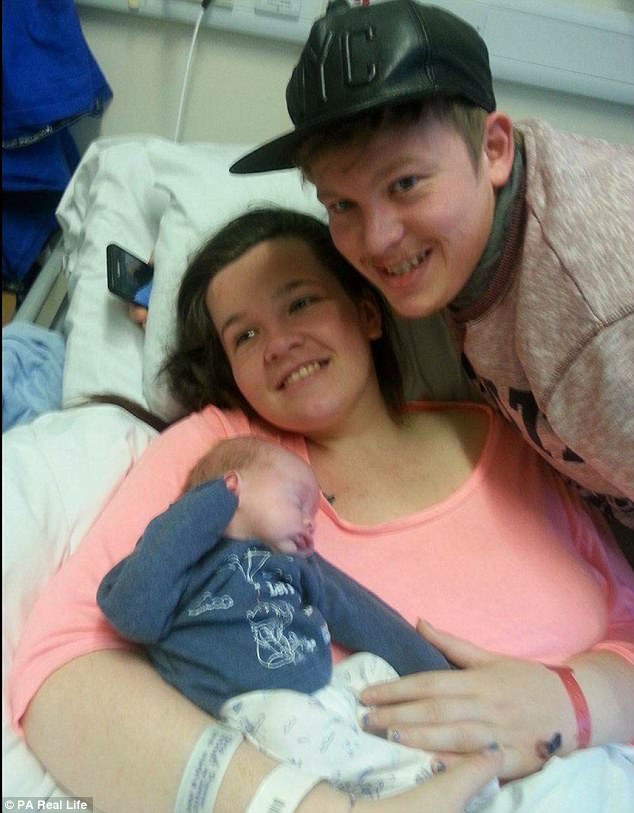 She is recovering at her mother’s, 30 minutes from her children (pictured with Ioan and Nico) 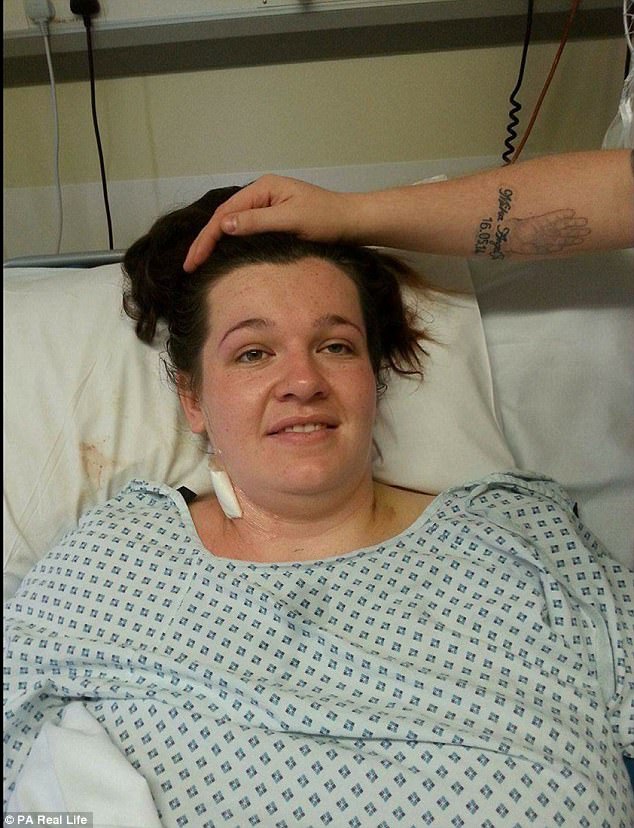 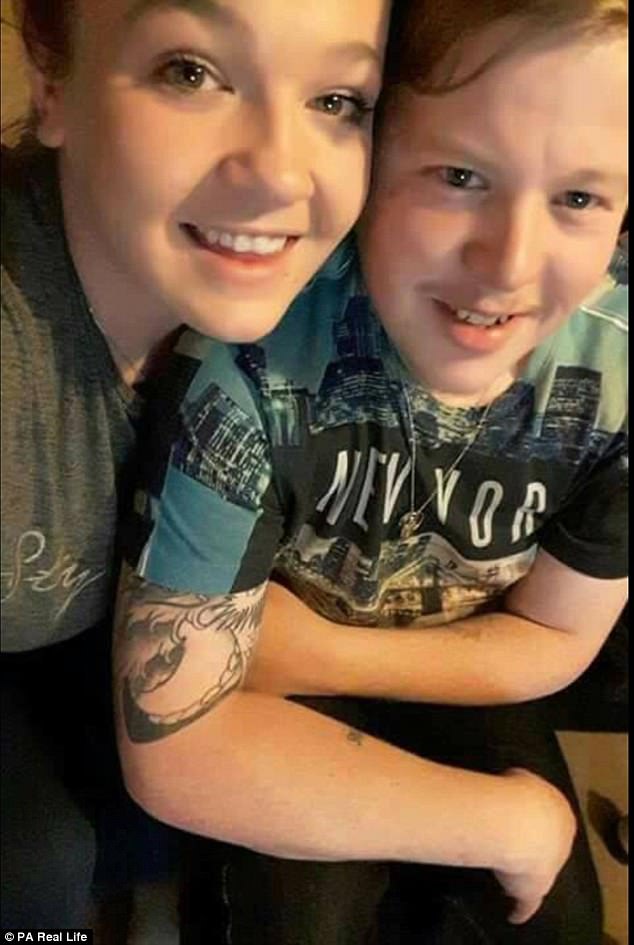 Pictured in happier times, Shannon and Ioan have been together for six years 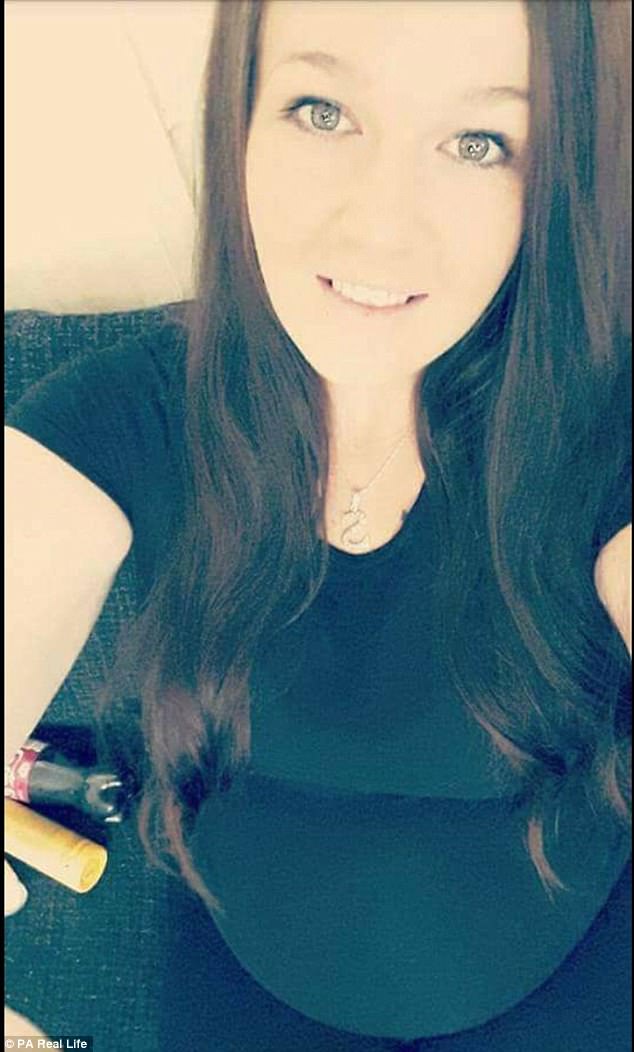 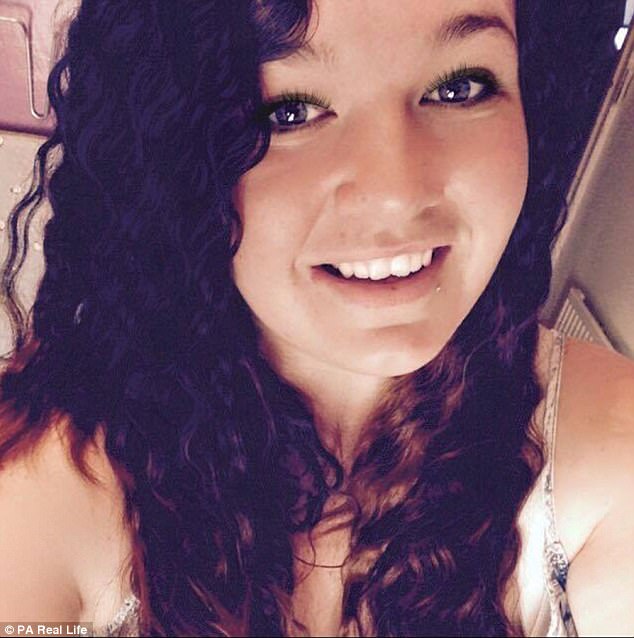 ‘Shannon needs a lot of care’

After spending six weeks in hospital, Shannon was finally discharged last week and is being cared for by her mother at her parents’ home; a half hour bus journey from Ioan and their children.

Nicola said: ‘We went to the hospital that day in September expecting to come home with a new baby, but it’s like we have another child, too, because Shannon needs a lot of care.

‘The brain injury has really affected her sight. Sadly, she is almost unable to see anything. She can just make out the outline of shapes.’

‘Bonding with Nico has been difficult, because she has no memories of being pregnant or giving birth.

‘Ioan brought in videos of their three-year-old daughter, Mika, which at least helped to jog her memory of her.’

Slowly, the family have tried to bring back memories for Shannon, but she is still missing large parts of her life.

She is also having intensive physiotherapy, which doctors hope will help her to relearn how to do everything from feeding herself to taking a few steps.

Although Shannon has worked hard to learn to sit up, move her arms and even take a few steps, she is still mainly confined to a wheelchair and needs help to do most things.

Nicola said: ‘I have a disabled daughter, Evie, so my house is already adapted for a wheelchair and I can help to care for her.

‘Our aim is to find a house closer to us for Ioan and the children, so they can spend as much time together as possible, as they are currently about a half-hour bus ride away. 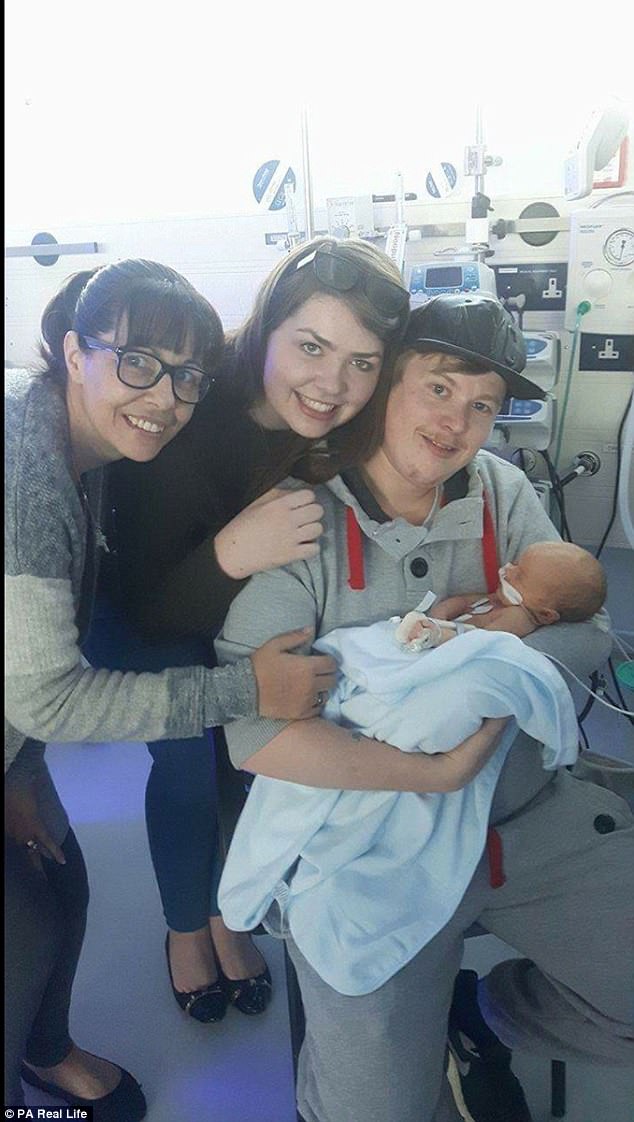 Although Shannon’s memory is returning, she is missing parts of her life (pictured Nicola, sister Tia, Ioan and Nico shortly after the terrifying ordeal in hospital) 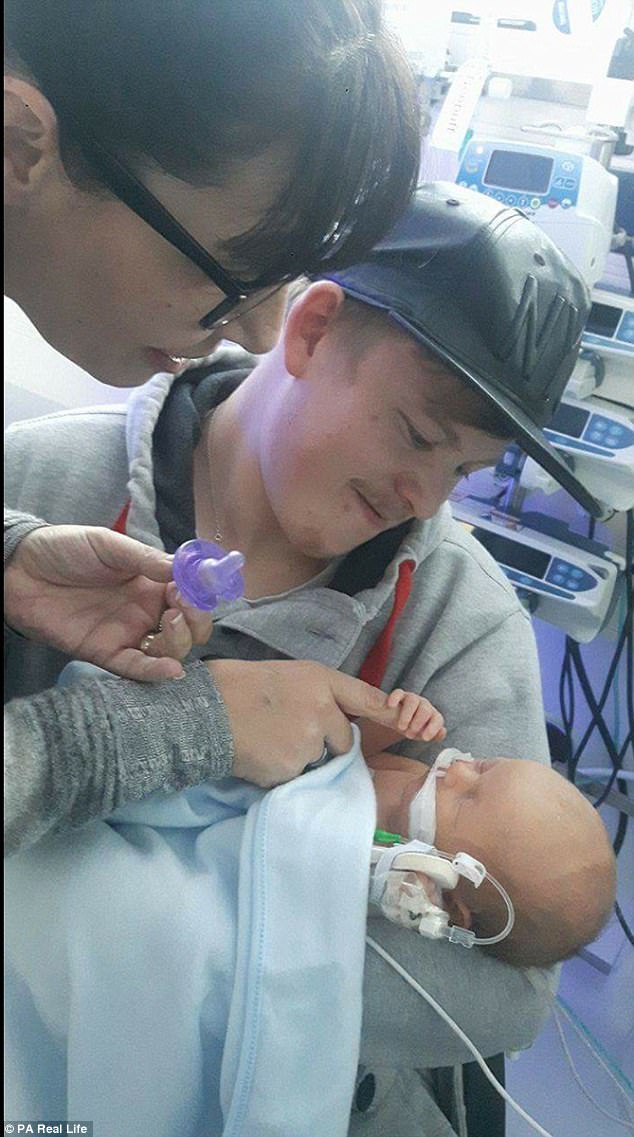 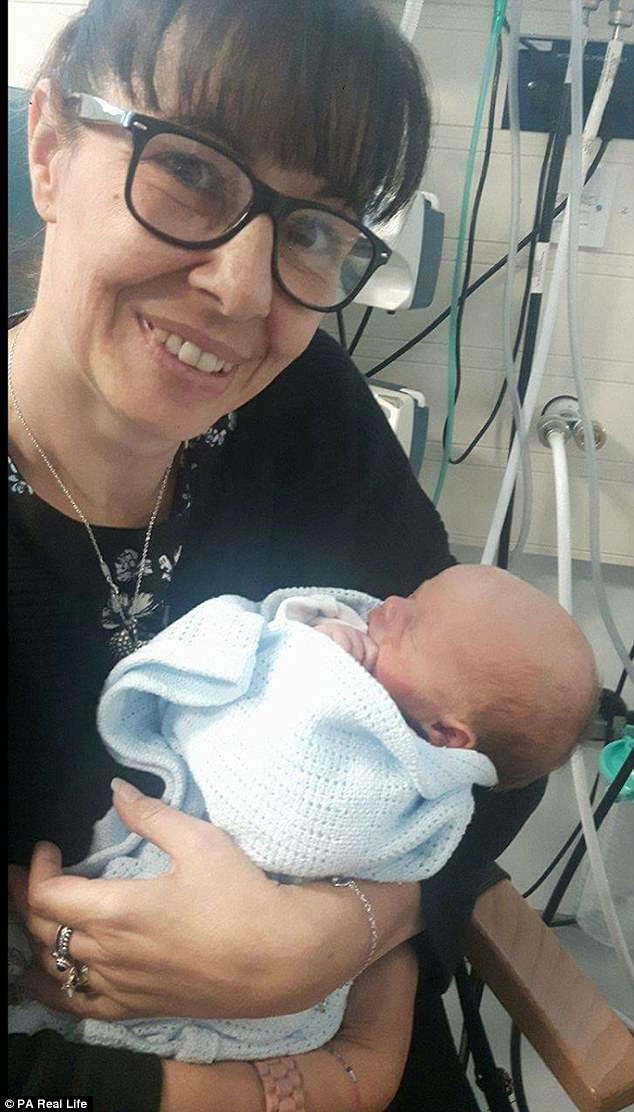 ‘We just want her family to be together again’

Nicola said: ‘We’re so proud of Shannon and how far she has come. Recently, her grandad asked her what has made her push herself so hard and she told him it’s all for her children.

‘It’s been such a difficult few weeks and we just want her family to be together again.’

Nicola is determined to work with Shannon to restore her mobility and memory, with their ultimate goal being for her to walk down the aisle when she is better.

Her mother said: ‘When she was in intensive care, I told Ioan that I wouldn’t think any less of him if he left her, but he told me there was no way. He loved her and he knew he wanted to marry her.

‘I promised him I would get her to walk down the aisle. It won’t be easy but I know she can do it.’ 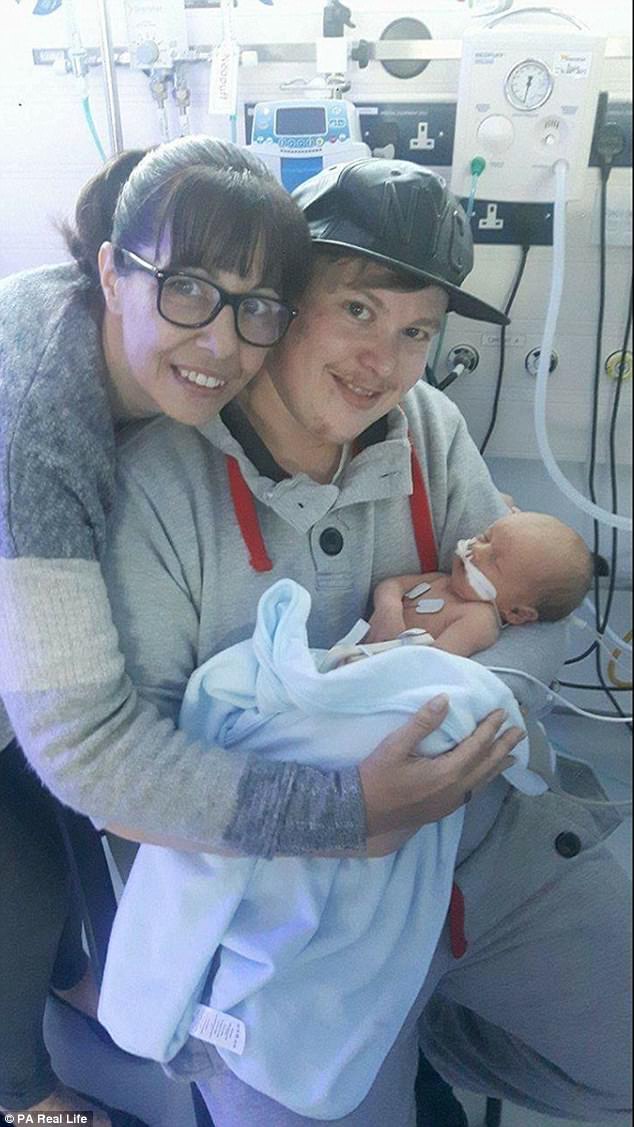 Ioan refused to leave Shannon after the ordeal, saying he loved her and was going to stay 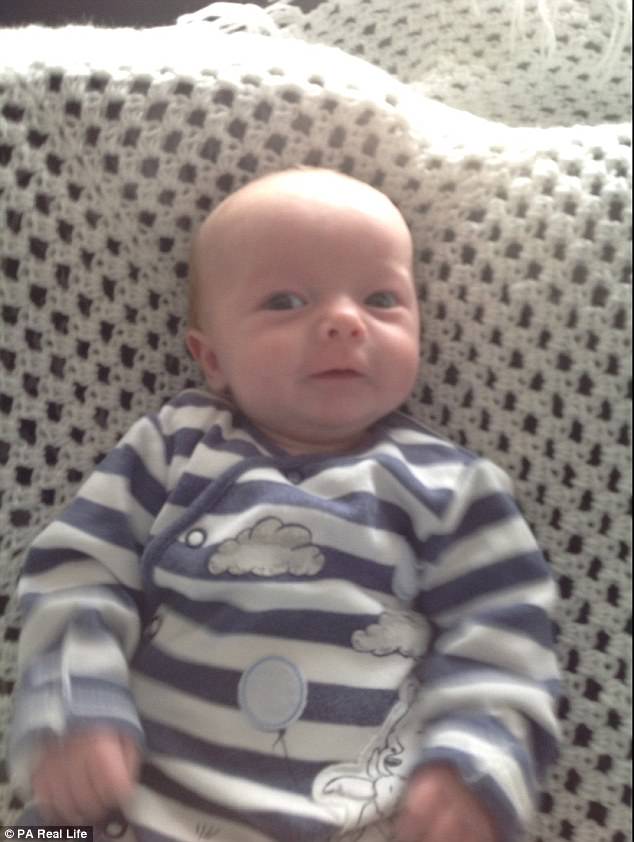 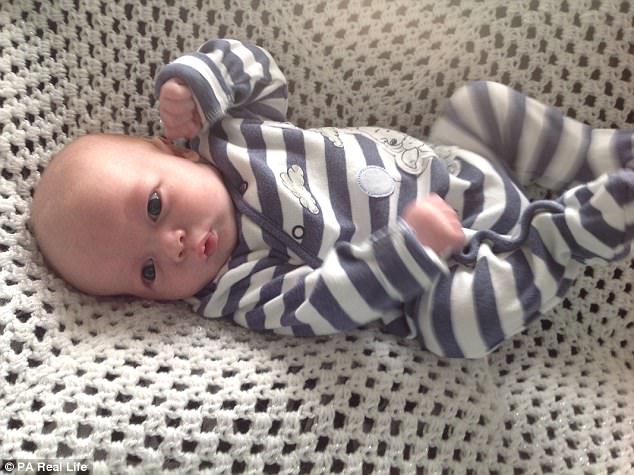 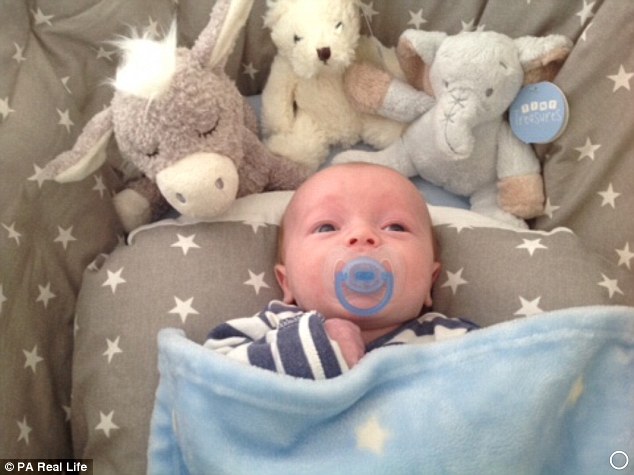 Yet, Shannon woke singing ‘Like A Prayer’ as the Madonna song played in the background

‘I thought she was gone’

Due to the small size of Shannon’s baby, she was admitted to the Royal Gwent hospital in Newport a few days before her due date, however, when she arrived there with Ioan and her mother by her side on the morning of September 29, doctors were shocked to discover she was already two centimetres dilated.

By 11pm the next night she was just 5cm dilated, but was shortly moved to the delivery room where she swiftly became 10cm dilated and was told to start pushing.

Nicola said: ‘It was a lovely moment. First she told her fiancé she loved him and then me and I replied, “I love you too baby.”‘

Then, just before midnight, her heart stopped beating.

Nicola said: ‘Suddenly, I realised Shannon was unconscious. There was noise from all the machines and the room was instantly filled with doctors and nurses.

‘I was just holding her head telling her to open her eyes and keep pushing.’

As the drama unfolded, doctors ushered Nicola and Shannon’s Ioan out of the room.

Nicola said: ‘I didn’t want to leave Shannon. My nine-year-old daughter, Evie, was starved of oxygen at six days old, so the idea of being left in a waiting room while Shannon went through this was so frightening for me.’

‘I called my husband Heath, 43 – Shannon’s dad – and told him I thought she was gone, because they were still working on her.’

After being in a coma for almost two weeks, Shannon started to sing along to Like A Prayer, which was playing in the background.

Nicola said: ‘After that she started singing Somewhere Over the Rainbow and when she finished, she said to me “Mammy, I was over the rainbow.” Tia, Shannon and I are quite spiritual and while Shannon was unconscious Tia and I gave her spiritual healing. We believe that she remembers that.’