Mothercare has bounced back to profitability despite acknowledging that it has been significantly affected by supply chain disruptions and store closures.

The baby products seller recorded profits of £3.6million in the six months to 25 September against a loss of £13.2million in the 28 weeks to 10 October last year.

But global retail purchases for the period declined modestly to £184.3million and were still more than a quarter below what the company would typically anticipate.

Recovery: The baby products seller recorded profits of £3.6million in the six months to September 25 against a loss of £13.2million in the 28 weeks to October 10 last year

As well as lockdowns forcing outlets to temporarily close, the firm noted that its manufacturing plants in India and Bangladesh had been affected by restrictions while producers in China had been struck by power outages.

It added that the problems affecting international shipping were causing its franchise partners to receive products later than expected, including those for the autumn/winter 2021 season, and impacted their ability to sell them at full price.

But it said the various measures it had undertaken to enhance its profitability had begun to ‘bear fruit’, adding it is ‘well-placed for further improvements in performance as retail sales return to their pre-pandemic levels across the globe.’

These include reducing administrative costs, which fell by 13 per cent on last year, reviewing its brands, reforming its supply chain to boost delivery times and cut costs and complexity, and integrating a new enterprise resource planning system.

Mothercare said: ‘Whilst we remain cautious given the ongoing pandemic restrictions and supply chain headwinds, we believe that the second half of this financial year should deliver a performance at similar levels to the first half.’

The company has had a troubled few years due to declining sales, tough competition from rivals like supermarkets and years of losses, and fell into administration in 2019, putting 2,500 jobs at risk. 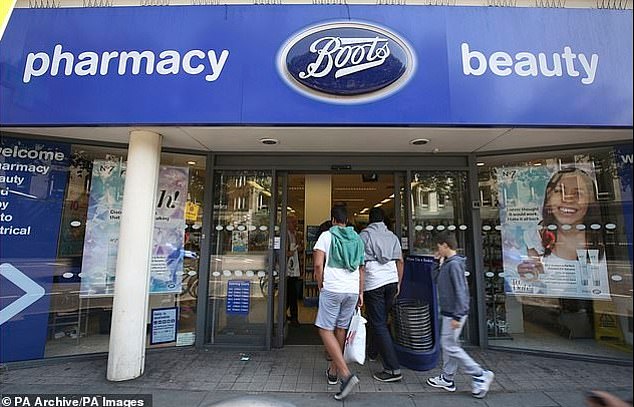 Tie-up: Mothercare made a deal with Boots in the month after it collapsed to sell some of its branded products in multiple stores owned by the high street pharmacy chain

Chairman Clive Whiley was criticised for earning nearly £1million since he took over from his predecessor in April 2018 and for taking another job at funeral care provider Dignity just two months before Mothercare went into administration.

After entering administration, the Watford-based retailer subsequently shut all its shops in the United Kingdom, where it has become an online-only business, but it has 740 international establishments operated by franchisees.

Mothercare also made a deal with Boots in the month after it collapsed to sell some of its branded products, such as prams, clothes and car seats, in multiple stores owned by the high street pharmacy chain.

It stated that if there is no additional major impact from coronavirus, it expects its franchise partners to earn sales of around £500million next year based on the amount of goods they have committed to buying for the two 2022 seasons.

Whiley said the firm’s results ‘demonstrate we are moving closer to unlocking the true underlying potential of Mothercare, reflecting the strong foundations we have created for the business over recent years, despite the impact that Covid-19 still has had over the period’.

‘With positive feedback to our new product ranges and a lean operating structure, we enter the second half with growing confidence for our future prospects.’

Shares in Mothercare were up 3.1 per cent to 19.4p during the late morning today, meaning their value has grown by over 70 per cent since the start of the year.