Mother’s £195,000 dream cliff edge home falls 70ft to the beach below after huge landslide in Kent

A mother-of-five’s dream house, left hanging on the edge of a cliff after a huge landslide, collapsed into the void in the early hours of this morning.

Dramatic images show how the bungalow in Eastchurch, Kent, has been shattered overnight after the ground underneath it continued to give way.

Emma Tullett bought the timber-framed two-bedroom property, complete with swimming pool, in August 2018, but has now ‘lost everything’ as a result of the disaster.

An aerial shot today shows how the property in Eastchurch on the Isle of Sheppey, Kent, completely collapsed off the edge of a cliff 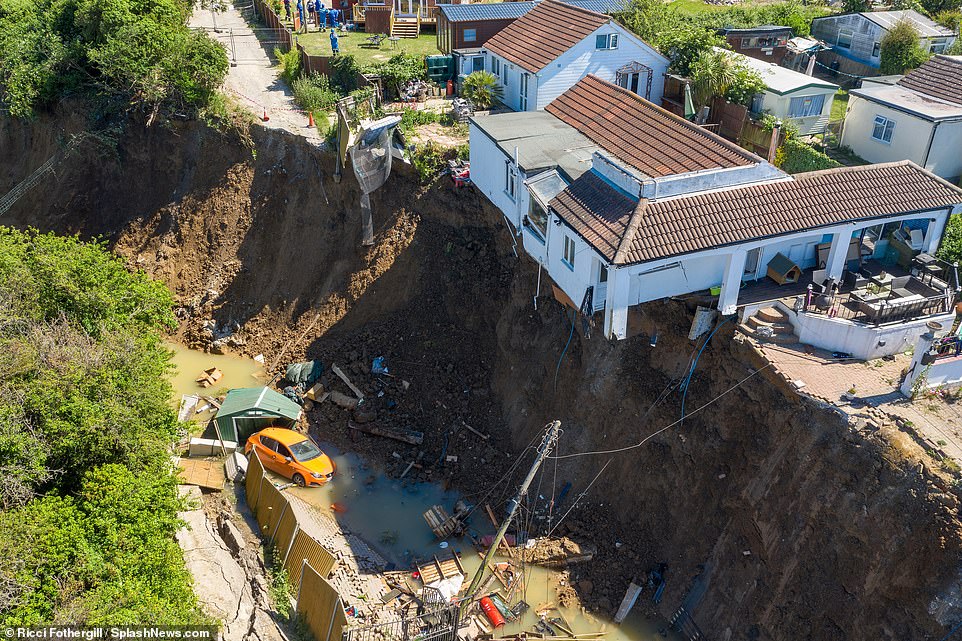 Drone photographs from Sunday show the extent of the eroded cliff collapse, with Emma Tullet’s orange Seat Ibiza among the debris that fell below, but the majority of the property was still intact

But the £195,000 home – which also had an annex housing two of her teenage children – started to collapse during the cliff fall on Sunday.

Half the property fell to the sea below along with her orange Seat Ibiza.

On Monday, video footage showed the gap underneath her home where soil had fallen away.

By today, the rest of the house had also collapsed, with an annex building and pool all that appeared to be left.

She shared her home, ironically named Cliffhanger on the Isle of Sheppey, with her partner and four of her children aged six, seven, 15 and 17.

The family were evacuated on Sunday and have been put up in a house in Sittingbourne on the mainland.

Emma, 42, noticed bricks in her front garden separating after arriving home from work on Friday afternoon.

Within hours, she heard ‘crunching’ and blinds in her living room fell off the wall shortly after 9pm.

Emma grabbed her children and the family left the house with just their phones, chargers and the clothes on their backs. 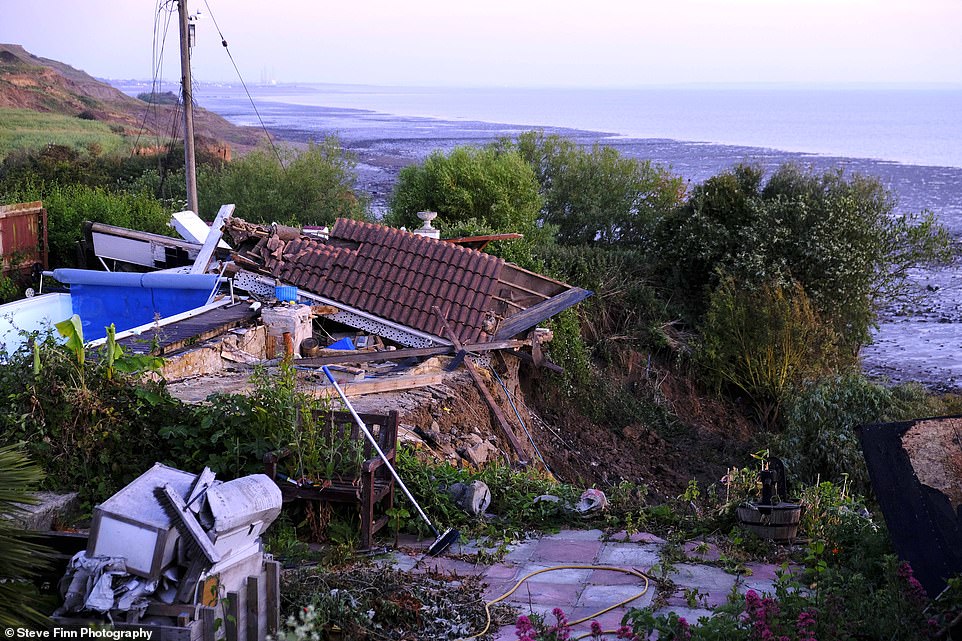 The house, pictured today, was left dramatically hanging on the edge of a cliff after a huge landslide and collapsed into the void in the early hours of this morning 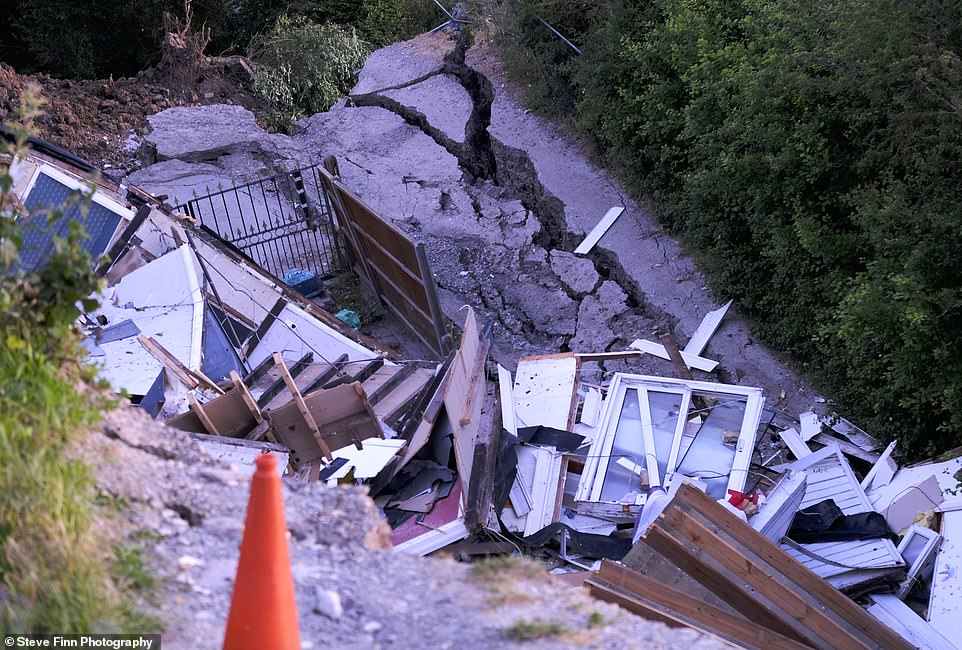 Dramatic images from today show how the bungalow in Eastchurch, Kent, has been shattered overnight after the ground underneath it continued to give way 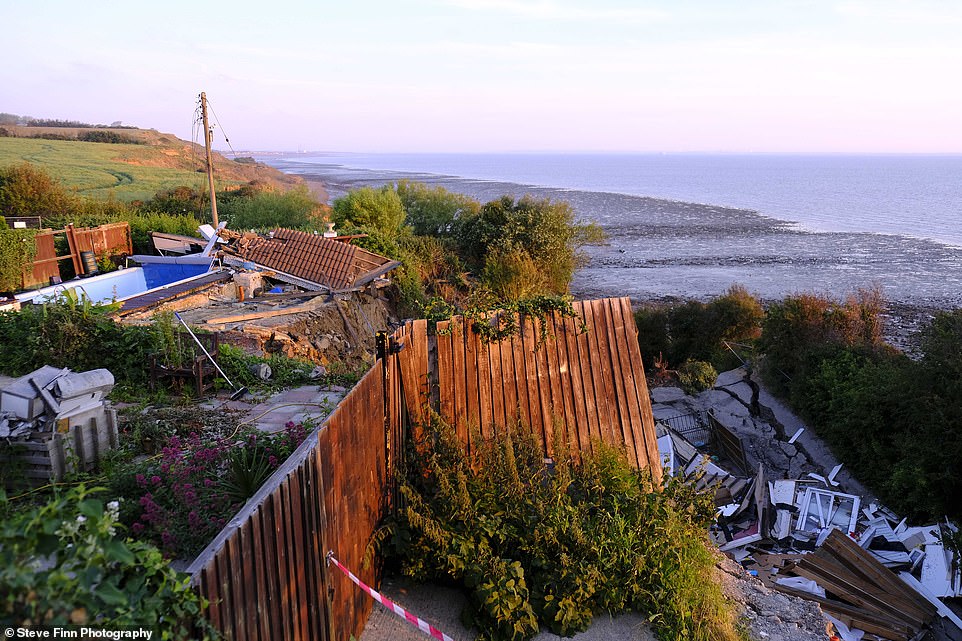 After teetering on the brink over the weekend, Emma Tullett’s beloved property finally collapsed into the void this morning 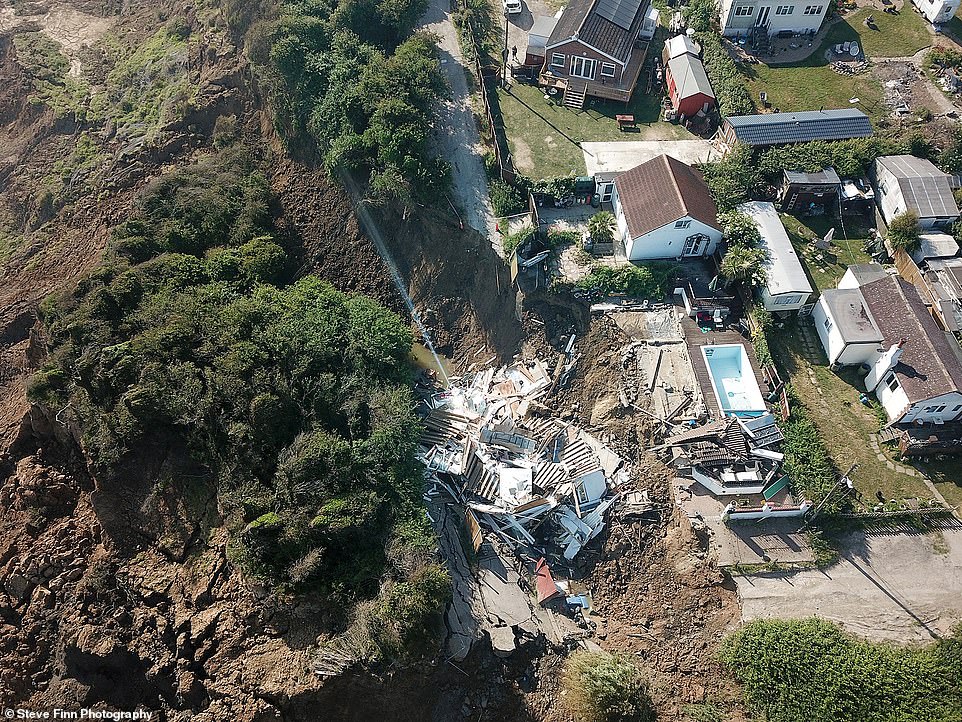 Coastguard officers and council engineers are expected to arrive at the scene today to assess the latest collapse, pictured this morning, to see if other homes are now at risk 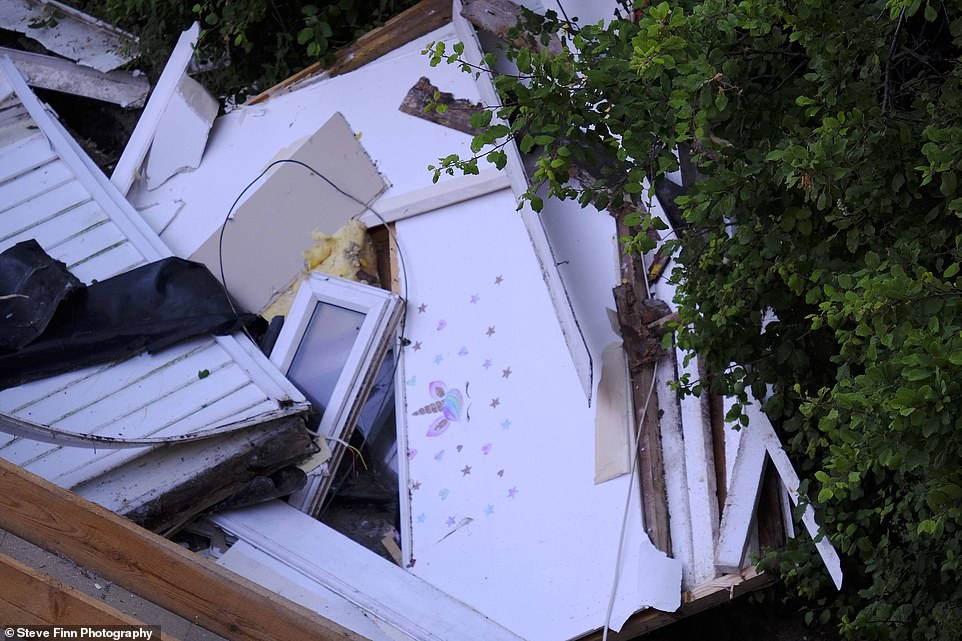 Most of the house, pictured today, has now completely collapsed, with an annex building and swimming pool all that appeared to be left 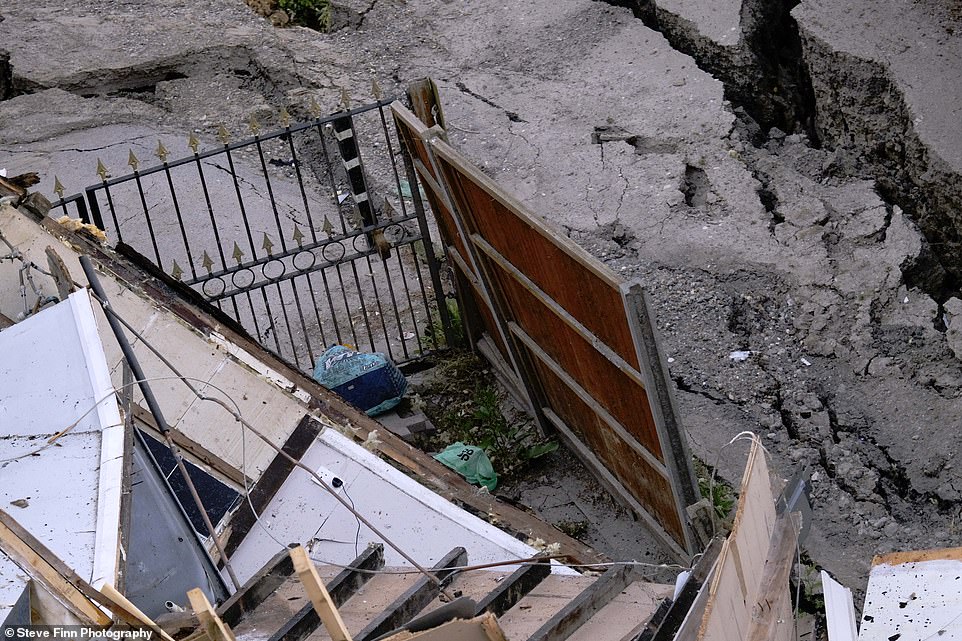 Emma shared her home, ironically named Cliffhanger on the Isle of Sheppey, with her partner and four of her children aged six, seven, 15 and 17. Pictured: The remains this morning 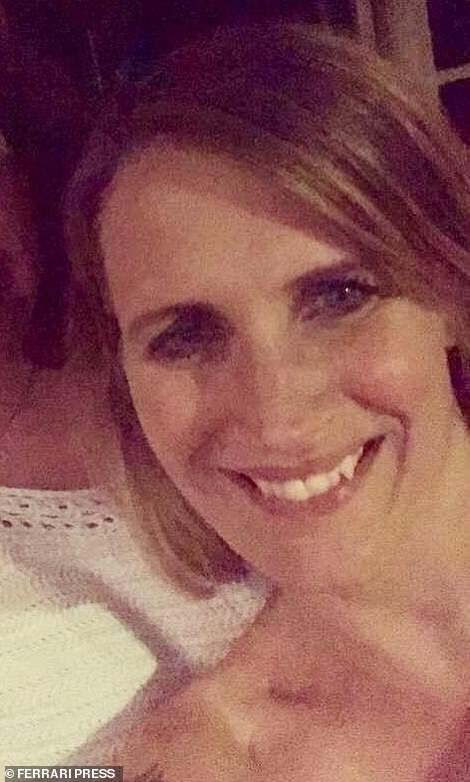 Mother-of-five Emma Tullett, 42, pictured, told how she ‘lost everything’ after a cliff collapsed sending her dream home plunging over the edge

Co-op assistant manager Emma said on Sunday: ‘I was sitting there watching TV with a glass of wine and then the blinds fell off the wall. Everything happened really quickly.

‘I heard this crackling and crunching and then you could tell the cliffs were gone. I think the cracks must’ve been getting bigger over a few days.

‘We grabbed the kids and the teenagers from the annex and just said get whatever you can.

‘Today, half of our house fell off the cliff. All that’s left is the living room, a bedroom, kitchen and the hallway.

‘It’s absolutely heartbreaking – we’ve lost everything. This was my dream home which I paid for in cash.

‘We were told we’d have about 40 years living here, but we’ve not even had two.

‘We can get a new house, a new car – but it’s things like baby photos of my children that will all be at the bottom of the cliff now.

‘It’s the sentimental things that I can’t get back that make this even worse.’

Coastguard officers and council engineers are expected to arrive at the scene today to assess the latest collapse to see if other homes are now at risk.

A video yesterday captured the remaining parts of the home dangling precariously over the clifftop, with a door seen elevated in mid-air above the foundation.

On the ground below, gates, fences and furniture were strewn beneath the cliff, with Ms Tullett’s car covered in dust and murky water which has gathered in the wreckage.

In one moment, more household objects tumbled from the bottom of the home, before crashing into the water and rolling to a stop in the waterlogged rubble below. 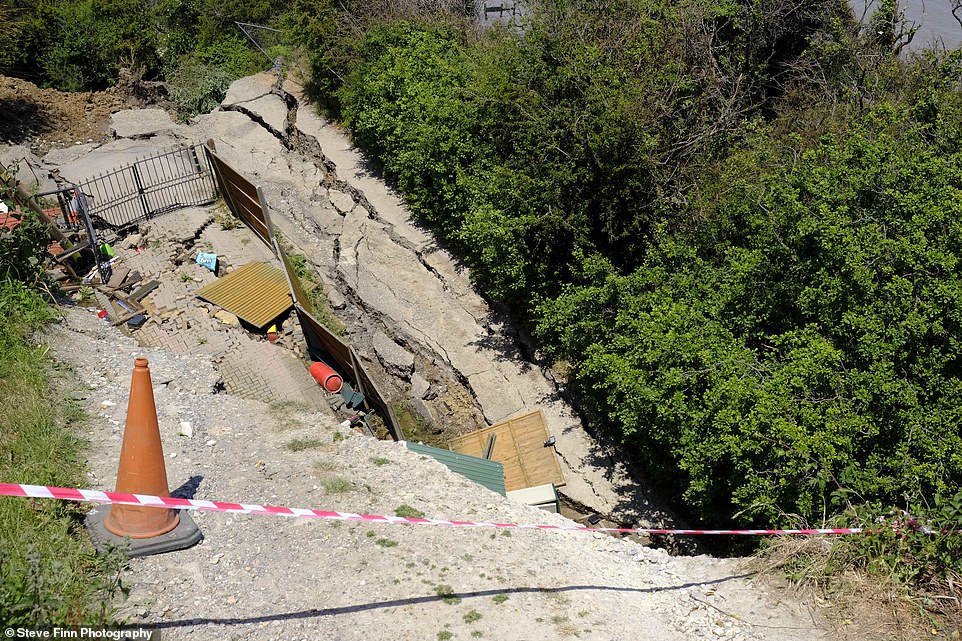 The home, pictured yesterday, was teetering on the brink before completely collapsing into the void below overnight 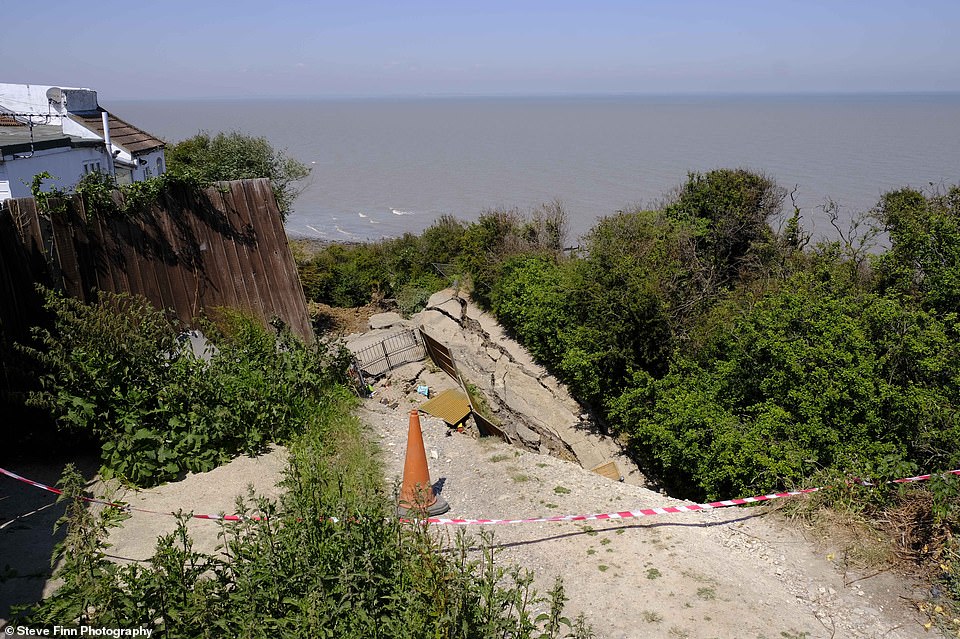 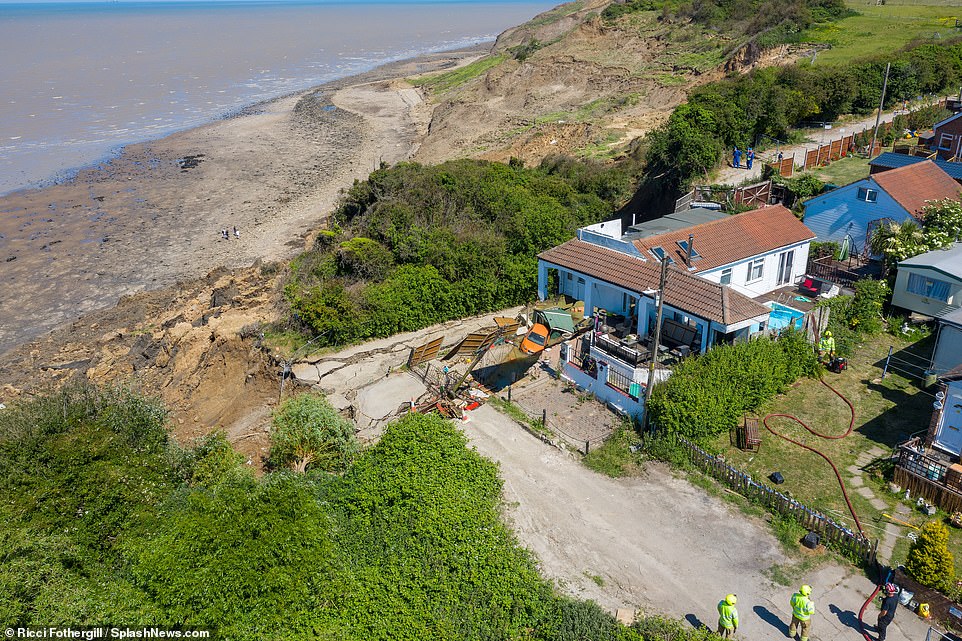 Co-op assistant manager Ms Tullett told MailOnline on Sunday: ‘I was sitting there watching TV with a glass of wine and then the blinds fell off the wall. Everything happened really quickly’. Pictured: The extent of the damage yesterday before the house completely collapsed 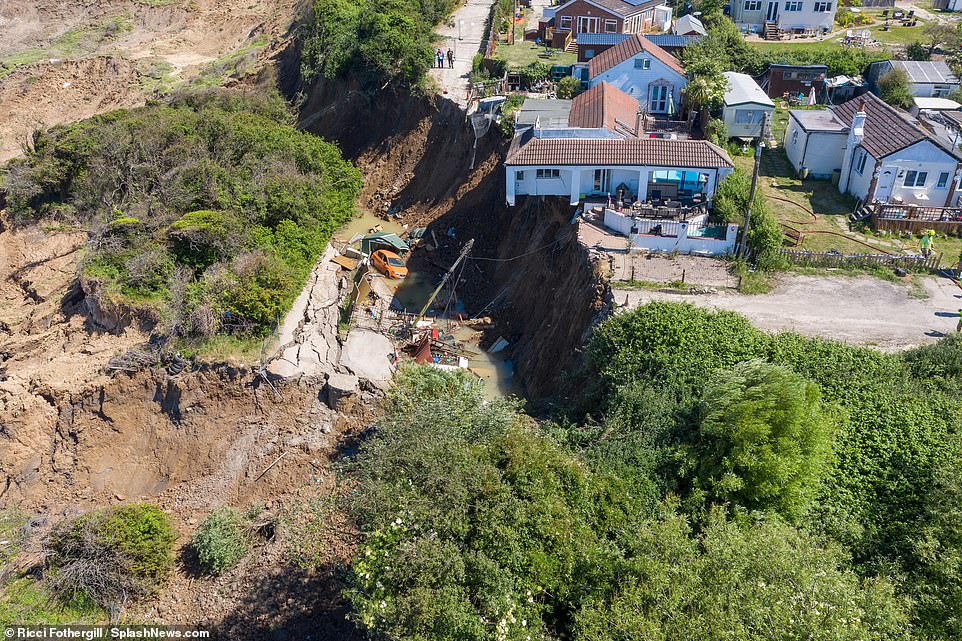 ‘I heard this crackling and crunching and then you could tell the cliffs were gone. I think the cracks must’ve been getting bigger over a few days,’ she said. Pictured: The property was teetering over the edge of the cliff yesterday 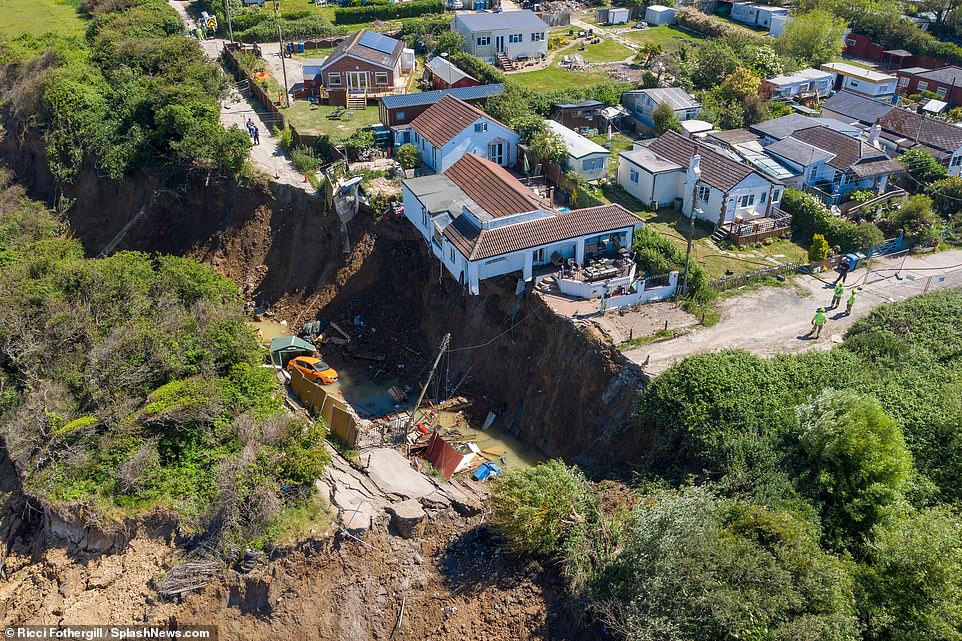 Locals say the collapse, pictured above on Monday, is due to the dry weather. Ms Tullett’s teenage children lived in an annex off the main property, which was the first of the at-risk houses to fall 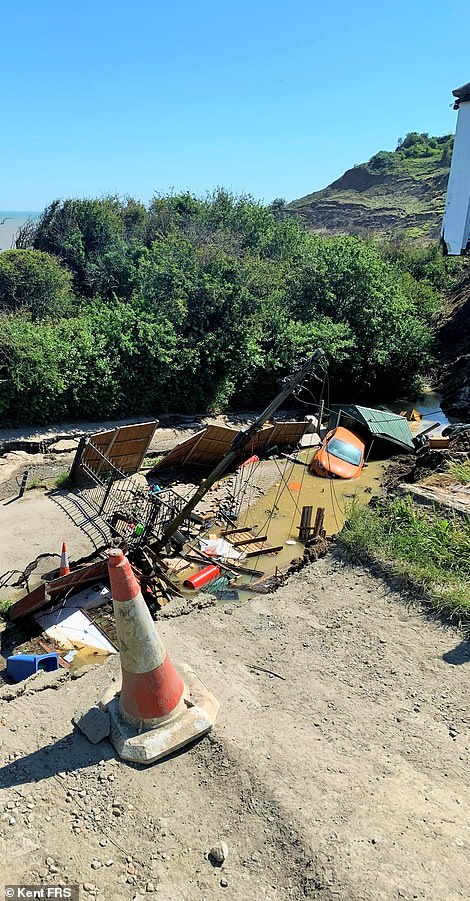 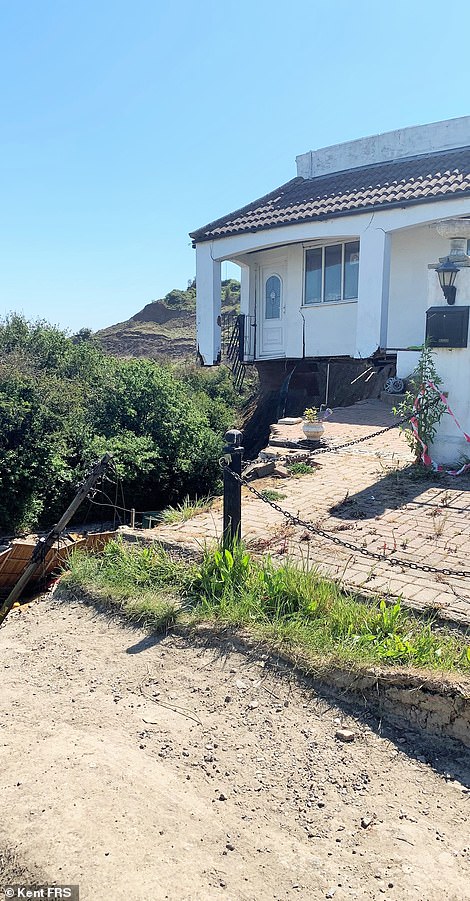 Shocking pictures taken on Monday show the family’s car sunk in a pool of water (left) after cliff erosion caused the house to fall almost-entirely off the edge, before it did collapse completely this morning

Ms Tullett’s neighbour, Ed Cane, yesterday described how he fears his property could be next – as it sits just yards from the perilous drop.

The 67-year-old has been forced to move into a caravan in his back garden after being warned the home he spent thousands on renovating would be next to go.

He said: ‘We were woken up at around 10.30pm on Friday night by the police and told to get out because it had started to go.

‘So myself, my sister and the dog Daisy parked the car up the top and slept there for the night. We were never told about this rescue centre.

‘When we came back on Saturday I knew something was missing. The telegraph pole and cables had all gone. I phoned the electrics and BT to sort them out as they were dropping like flies and it was going to concertina the rest of them.’

The pair then returned to their home on Saturday night, but woke to discover their gates had disappeared from view.

‘I got out of bed at about 4am on Sunday and looked out the window,’ Mr Cane said. ‘I thought something looked different and wondered where the post and gates had gone.

‘I couldn’t believe it. The second hit was devastating. They’re saying it might be a sinkhole.’ 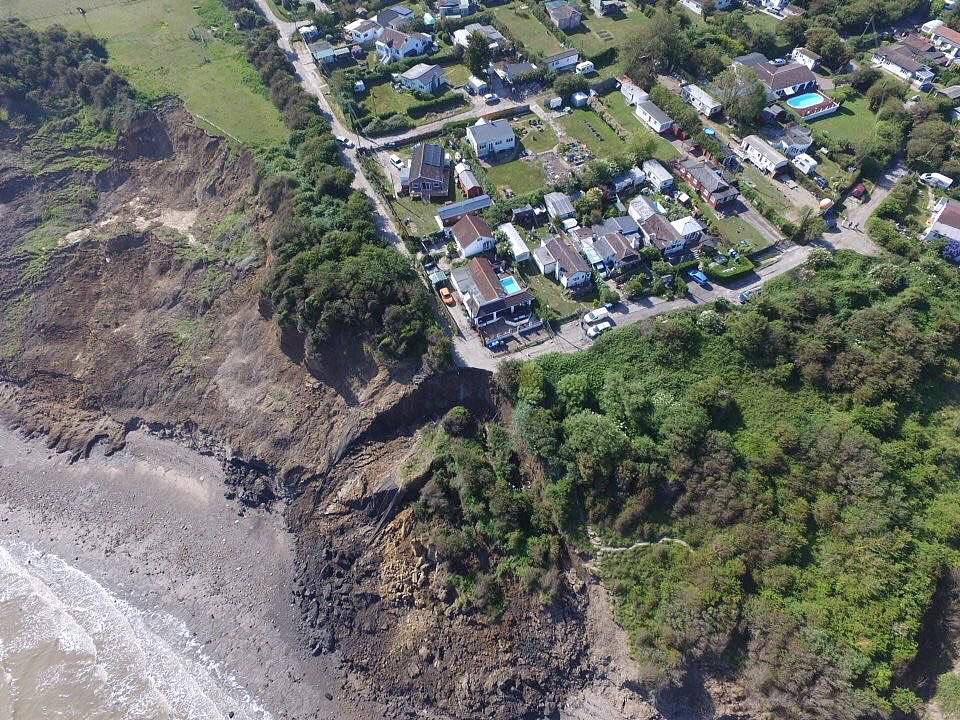 Pictures from Sunday show just how rapidly the cliff crumbled into the sea below. The house had to be evacuated along with four of her five children 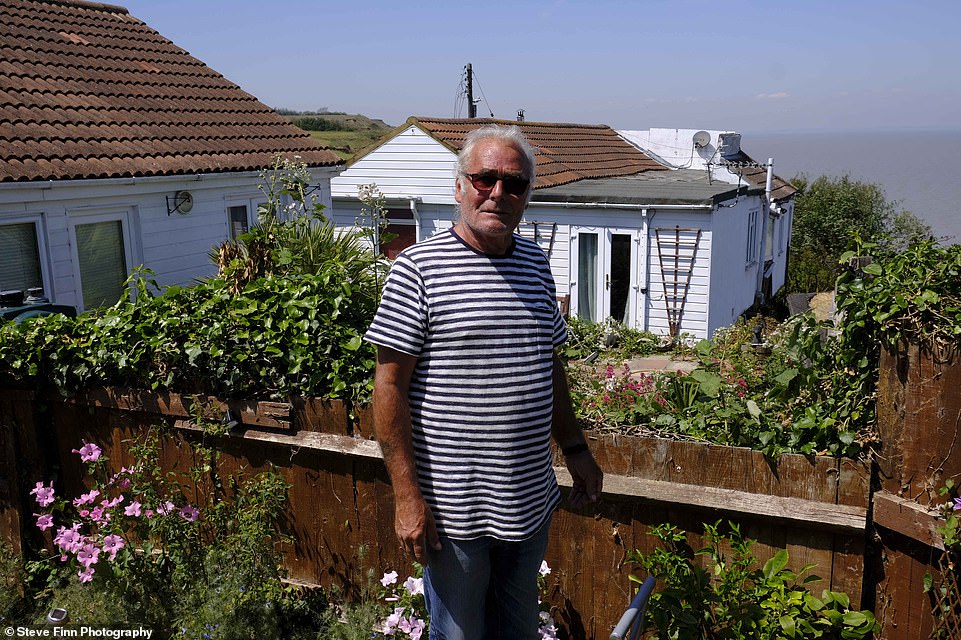 Ms Tullett’s neighbour, Ed Cane (pictured), today described how he fears his property could be next – as it sits just yards from the perilous drop 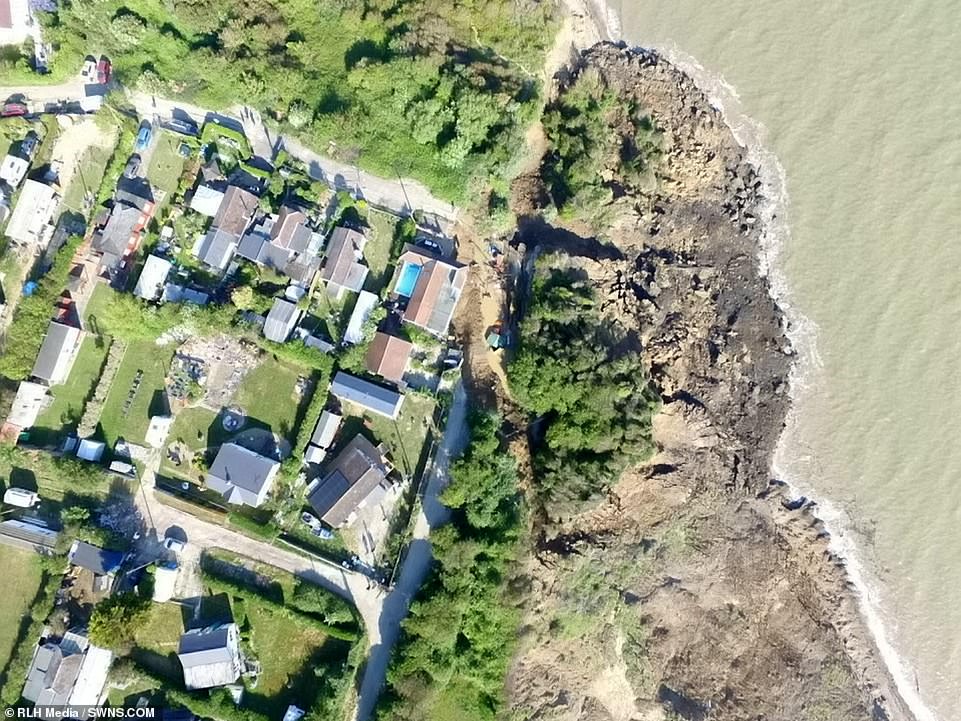 Firefighters were called in to evacuate 20 homes overnight after a ‘significant collapse’ of the cliffs by the houses, pictured on Sunday 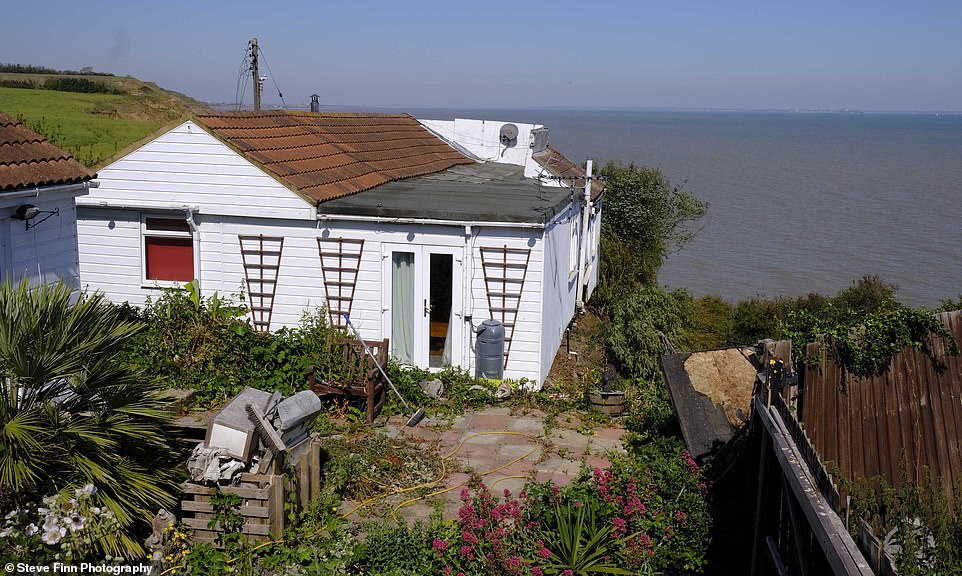 The timber-framed two-bedroom property, complete with swimming pool, pictured last Thursday, was bought in August 2018 and appeared stable just days before the collapse

He added: ‘The first night they were saying you need to get out as it could kill you but now there’s not a soul down here. It’s not safe.

‘Everybody is angry and I’m at the stage now where I don’t know what to do. I don’t want to move out as this is the house I was planning on dying in. I’ve done it up and spent all my money on it.’

More people were evacuated on Sunday as fire crews used a drone while specialist Coastguard cliff rescue teams scoured the collapsed rubble and soil in case people were underneath.

There are not believed to be any casualties, but it is not known at this stage if there could be any further collapse although police chiefs say there is a ‘significant risk’.

Teams from Kent Police, Kent Fire & Rescue Service, coastguard, Swale Borough Council, Southern Water, UK Power and the Environment Agency as well as Eastchurch Parish Council have been at the scene in the idyllic community of Eastchurch Gap.

Malcolm Newell, 70, a local parish councillor, owns two houses that were evacuated – including his own where he has lived since retiring as a wood turner in 2001.

He said that the parish council has been battling to get the cliffs secured for years.

The coastline is a designated as a Site of Scientific Interest (SSI).

Mr Newell and others set up the Eastchurch Gap Cliff Erosion Community Group to try and get action done.