Mothers and daughters: ‘I sang that day for Harry, Meghan… and Mum’

She’s won countless awards and performed at the Duke and Duchess of Sussex’s wedding. But for choir conductor Karen Gibson her happiest achievement is the pride of her mother Nathalie

Karen and Nathalie at the Queen’s Garden Party in 2018

Standing in St George’s Chapel on that May morning two years ago, I knew the eyes of the world were on me. In front of me stood my choir, behind me the newly married Duke and Duchess of Sussex. As I waited for the first bars of music to play, with the chapel quiet, it was my mum my thoughts turned to.

I could picture her so clearly in my mind, at home in Southwest London, chair pulled up close to the TV, absorbing every second of this amazing moment in my life.

Mum arrived in the UK from Guyana in 1962 – she was part of the Windrush generation who came after the Second World War. I was born the following year and my sister Kim is a year younger than me.

Our father, who was also Guyanese, left the family when we were little. Mum rose to the challenge of being a single mother with a determination which, when I reflect on it now, blows me away. Mum worked three jobs to support us. Her generation of women possessed a resilience and courage you don’t often find now. I look back and wonder how she managed to work so hard, run a home and be such a strong maternal figure to us. When she wasn’t working, or sleeping in between shifts, she was in the kitchen cooking hot curries, or we were all at church, scrubbed clean, in our good ‘church clothes’ that weren’t allowed to be worn any other day of the week.

Mum lived with racism every day; it was just part of the fabric of life for her. Sometimes it was obvious hostility, often it was insidious. But it was always there. She didn’t shield that truth from me and my sister. She knew she had to prepare us, as black women, for the world we too would have to face. Time and time again as I grew up, Mum would tell me that as a black woman I had to work harder, achieve more, be better – because the colour of my skin meant the cards were stacked against me. While I didn’t experience the same open hostilities she had, because society had changed, I knew I had to overcompensate.

Mum didn’t want me to have a career in music; she wanted me to become a lawyer and Kim a doctor. ‘Get your piece of paper,’ she would say firmly, because homework always had to come first. Yet, ironically, it was Mum who first fostered my passion for music and performing. When I was ten, she sent me and Kim to piano lessons – she says it was to keep us out of trouble! We were both classically trained but church was where I fell in love with singing. My teenage years were spent travelling up and down the country to perform at gospel concerts, as well as forming a group called New Dawn with Kim and some friends.

I forged a career leading gospel music workshops in churches, schools and communities in the UK and across Europe. In 1994 I founded The Kingdom Choir. We went on to sing for Nelson Mandela and the Queen and perform with Elton John and the Spice Girls. In 2010, when I led a choir of young black schoolgirls to victory in a national televised competition, Mum finally understood why it was my vocation and, for the first time, told me how proud she was of me.

I’d always craved more affirmation from Mum, for her to articulate the pride I knew she felt inside, but it didn’t come easily to her. Life has dealt her many hard knocks which makes her struggle to express her emotions. However, I think that seeing those girls from a tough part of London celebrate their win against the odds, and seeing what my skills could achieve, resonated deeply with her. She phoned me the morning after we won and said proudly, ‘God has given you a gift, Karen.’ Then, in her own inimitable style, said: ‘And don’t muck it up!’

I was on a bus in March 2018 when someone from Prince Charles’s office called to invite The Kingdom Choir to sing at the royal wedding.

I thought it was a joke at first; I couldn’t believe it. Leading the choir that day, I didn’t feel nervous, just happy and honoured to deliver this beautiful gift of music to Harry, Meghan and the world. And I knew that, in her own way, there would be nobody prouder than Mum.

All my life she has supported and pushed me to make the very best of myself. Watching me that day I hoped she felt she was reaping the rewards of all her hard work. 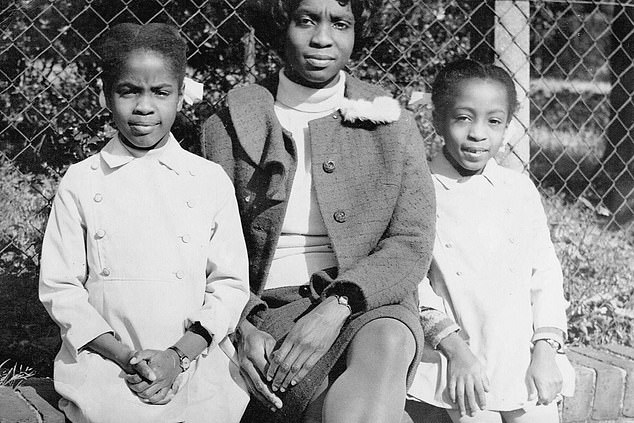 Karen and Nathalie with sister Kim (right) in 1970

Not long after I arrived in the UK, I looked for a church to worship in. I wanted the familiarity of going to a service and to pray for help and guidance as I started my new life. After a few weeks of attending a local Anglican church, the vicar said, ‘Thanks for coming, but the other members don’t like it. Please don’t come back.’

I felt so rejected, especially as it happened in a place where I should have found refuge and acceptance. Every day I sent Karen and Kim off to school and went to one of my three jobs, in nursing and as a telephonist, and would experience racism. People rubbed my skin, to see if the colour came off, and touched my hair; white colleagues were promoted over black ones even if they were less qualified, and I saw signs on doors that read ‘No blacks’.

I learned to keep my mouth shut and my head down, hoping things would change by the time my girls went out into the world. I was brought up in Guyana by my mother and my aunt, I was an only child and my father died when I was 16. My mother didn’t know she was pregnant and delivered me prematurely. I was so tiny the doctor told her to put me in a corner and let me die. My aunt scooped me up and, along with my mum, raised me. They taught me how to be a strong woman, like them.

Leaving Guyana when I was 25 was a very difficult decision because I already had three children there, two sons and a daughter – Karen’s elder half-siblings. Their father had left me for another woman and I decided to entrust my children to their grandmother and great-aunt, and move away. I didn’t want my family to just ‘get by’. I wanted a good life and I worked very hard to provide that for Karen and Kim, as well as sending money home for my children in Guyana, who I visited regularly.

It was important to me that Karen and Kim were well-dressed, studied hard and had luxuries like music lessons. I knew the world would judge them because of their colour and I wanted to give them the confidence and skills to rise above that and succeed.

As Karen became more involved in the musical world it worried me. I didn’t believe there was money or security in music. I thought it was a waste of her intelligence and the education I’d worked so hard to give her. Of course, she proved me wrong – what she has achieved is incredible. I love to hear Karen sing – she sings with her whole body and her heart and has inspired so many people with her voice and her energy.

I’ve spent a lifetime holding back my emotions. My life hasn’t been easy and I am afraid of being too happy in case everything goes wrong. But I am so proud of Karen and Kim, who is also a choir conductor. I watched Karen perform at the royal wedding alone at home. I wanted to soak up the moment privately. I cried tears of joy and gave thanks to God for this wonderful, talented daughter of mine. 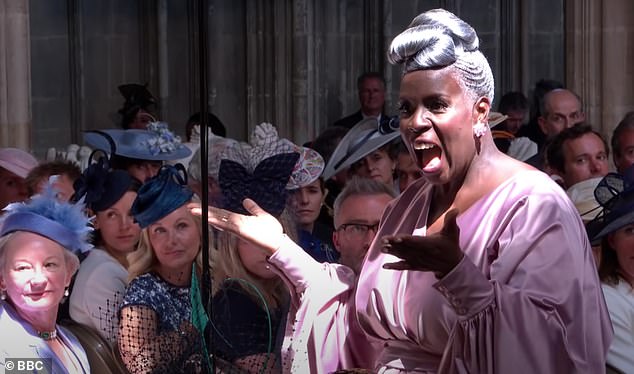 Karen performing at the royal wedding in 2018

KAREN AND NATHALIE IN FOUR

Karen She can fall asleep anywhere, at the drop of a hat.

Nathalie She’s got too much to say sometimes!

Karen She tells me family stories – they’re the soundtrack to my life and have taught me where I came from.

Nathalie Just being in her presence makes me happy.

Karen Her being back from work early once so she could walk me home from school, something she could rarely do.

Nathalie Dancing and singing to Tom Jones on the TV at just one year old.

The Kingdom Choir’s single ‘Real Love’, in aid of the charity Refuge, is out now