Mothers are now able to access free childcare to allow them to attend a cervical screening.

Childcare.co.uk, which has more than two million users nationwide, is offering women across the country one hour of free babysitting so they can have a smear test.

The brains behind the initiative worry many mothers put off the life-saving screening because they ‘cannot find the time’ and hope the programme will make a ‘huge difference’.

Cervical screening attendance is at an ‘all-time low’, with just 71 per cent of those invited going for their smear, NHS figures show.

This is despite 99.8 per cent of cervical cancer cases being preventable with proper tests, according to Cancer Research UK.

Richard Conway, founder of childcare.co.uk, said: ‘There’s been a lot in the media about a fall in women not attending smear tests for various reasons and I suspect a main one for mothers is not finding the time around their children.

‘We wouldn’t want women missing out on their smear test because of a lack of childcare and we loved that individual childcarers were offering this, so we thought we’d help out.

‘Within the first few hours of us asking our members, we had more than 500 childcarers sign up to the initiative. We hope this will make a huge difference.’

Childcare.co.uk helps parents find everything from babysitters and au pairs to private tutors and out-of-school clubs in their local area.

Its initiative was inspired by independent childcare providers that offered a similar free service.

Although a cervical-screening appointment typically lasts just five minutes, childcare.co.uk is offering women a free hour to allow for waiting times at the GP surgery, and travel to and from the clinic.

Robert Music, chief executive of Jo’s Cervical Cancer Trust told MailOnline: ‘It’s fantastic to see so many childminders are very generously offering their services to ensure women do not have to miss or rearrange their cervical-screening appointment.

‘At a time when uptake of cervical screening is at an all-time low across the UK, initiatives like this are more important than ever.

‘We know it can be incredibly difficult to get a convenient appointment.

‘We urgently want to see screening made more accessible with out-of-hours screening clinics, evening or weekend GP appointments, increased access at more sexual health services, and providing women with the opportunity to self-sample.’ 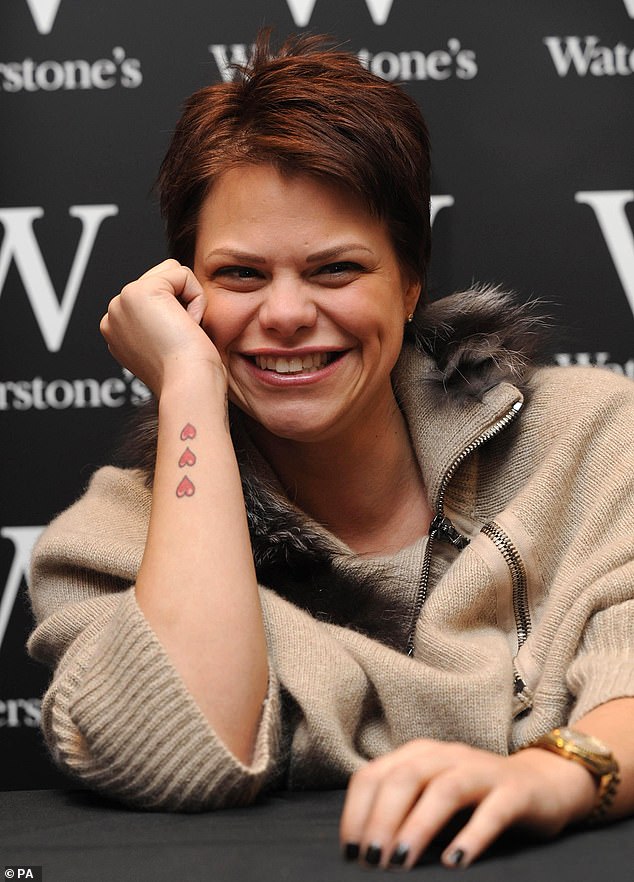 Jade Goody, who rose to fame after starring in an early series of the reality TV show Big Brother, died of cervical cancer aged just 27 in 2009 (pictured in December 2008)

HOW JADE GOODY’S DEATH SHONE THE SPOTLIGHT ON CERVICAL CANCER

Jade Goody, a reality TV star who shot to fame after appearing on Big Brother, died of cervical cancer aged just 27 in 2009.

Goody was diagnosed with cervical cancer on television while she was featuring on Bigg Boss, the Indian version of Big Brother, in August 2008.

By February 2009, Goody’s cancer had spread to her liver, bowel and groin. She underwent emergency surgery to remove three tumours.

The same month, Goody was told she had just months to live so she and her partner, Jack Tweedy married on March 12 – she died on March 22.

Later in the year, cervical screening rates rose sharply in the UK in what was dubbed the ‘Jade Goody effect’.

She brought such a high profile to the disease the number of women screened in 2008/9 was 3.6million, up from 3.2m the previous year, The Guardian reported.

Then-Health Secretary Andy Burnham said: ‘These figures show the remarkable effect that Jade Goody’s tragic case has had in reversing a downward trend in the number of young women attending cervical screening.’

Although screening rates have since dropped again, Goody’s mother, Jackiey Budden, continues to use her daughter’s legacy to encourage women get tested.

She told This Morning  people think smear tests are ’embarrassing or they’re scared’, adding: ‘It takes five minutes and I’ve never, ever missed one.’

Almost a third of women aged 25-to-49 have missed their latest smear test and in some surgeries three quarters have not attended.

The NHS target is that 80 per cent of women aged 25-to-49 be tested every three years, yet in some areas uptake has dropped to less than 50 per cent.

However, the numbers have since plummeted.

Women in the 25-to-24 age group are most likely to turn a smear down, with up to 38.9 per cent of them failing to take up an invitation, NHS Digital statistics show.

Although cervical cancer is most common in 30-to-35 year olds, the precancerous stage can be detected up to a decade earlier.

Experts claim the number of women having routine smear tests has declined over misplaced fears the procedure is painful or embarrassing, as well as a lack of time to attend the appointment.

Around 2,600 women are diagnosed with cervical cancer every year in England and 690 die from the disease, Public Health England (PHE) data reveals.

Women aged between 25 and 64 who are registered with a GP are invited to attend a cervical screening on the NHS.

Those aged 25-to-49 are invited every three years and 50-to-64 year olds every five years.

Smears do not detect cancer but check for abnormal cells that indicate a woman’s cervical health.

Around one in 20 women show abnormal changes, which might go on to become cancerous.

These women have their cervix examined more closely and are treated before tumours can develop.

Find out more about the childcare.co.uk initiative here.