Mother’s body began shaking due to a rare brain tumour

A trip to Disneyland Paris turned into a nightmare when a mother’s whole body began shaking uncontrollably due to a rare tumour growing on the outside of her brain.

Nicola Davies, 45, from Merthyr Tydfil, south Wales, had been unknowingly living with the growth for around 10 years before symptoms started to show.

Ms Davies and her husband, Joe, a draftsman, were on holiday at the theme park with their son Morgan, 11, and daughter Millie, nine, when she was woken in the night by her left leg violently shaking.

She subsequently went to the doctors who were unable to diagnose Ms Davies, who suffered months of night-time shaking, headaches, deteriorating vision and hearing loss.

Yet, an eye test may have saved Ms Davies’ life, as an optician noticed the tumour, known as meningioma, pressing on her optic nerve. Ms Davies later endured a seven-and-a-half hour operation that required she shave off her hair and left her with a prominent scar.

Ms Davies, a former kitchen assistant at a school, said: ‘I am so grateful that the optician got to the bottom of it though, as if the tumour had kept growing, it could have eventually killed me.’ 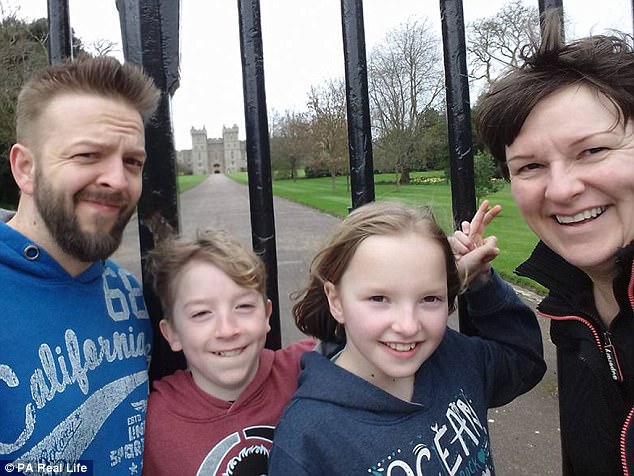 Nicola Davies, 45, (pictured with her husband and children) was on holiday at the time 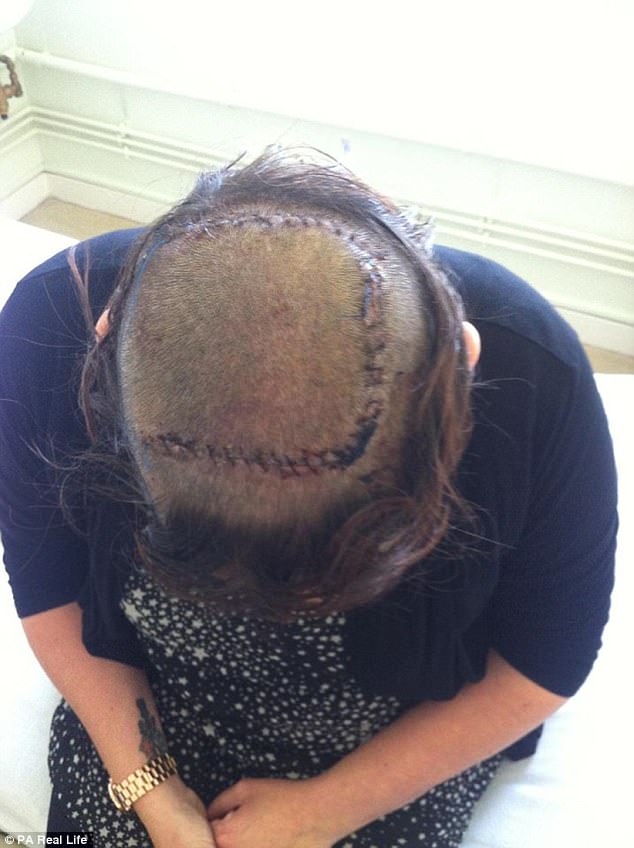 Meningioma is tumour of the tissues that protect the brain and spinal cord.

Such tumours do not spread and are benign in 90 per cent of cases.

Yet, they can cause disability, be life-threatening and regrow.

Meningioma’s cause is unknown, however, it has been linked to genetics and breast cancer.

A sufferer’s senses, movement and ability to swallow may be affected.

Meningioma may also cause fits, muscle weakness and severe headaches.

Treatment options include surgery and radio- or chemotherapy.

‘I was waking up to find my whole body jolting’

Ms Davies said: ‘I woke up at about 11.40pm and my left leg was shaking uncontrollably.

‘I called my husband and woke him up, but it stopped as quickly as it had started. I thought it was just all the walking and excitement.’

Ms Davies thought nothing more of the incident until it happened again approximately three months later.

She said: ‘I didn’t know what it was. I was going to bed and waking up to find my whole body jolting.

‘Joe told me I needed to go to the doctors and I made an appointment, but they couldn’t find out what was wrong. I had blood tests, but they said it could be anything.

‘It kept happening to me when I was relaxed. I would be woken up by the shaking, which would start in my left toe and spread up my leg.’

For months, Ms Davies went back and forth to the doctor, complaining about night-time shaking, headaches, deteriorating vision and hearing loss, but the cause remained a mystery.

Ms Davies said: ‘I knew there was something wrong with me and it was really getting me down. 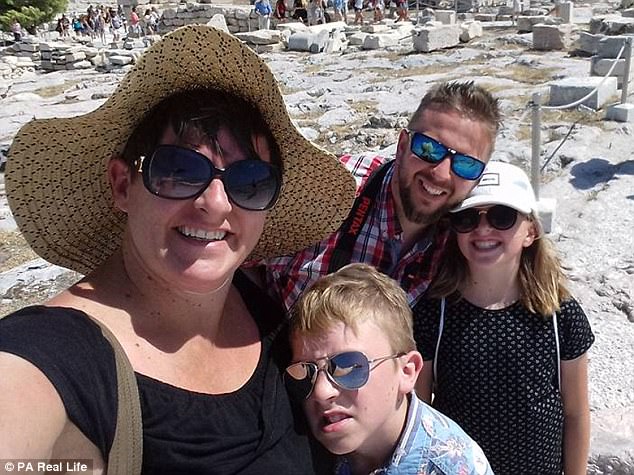 Before being diagnosed, Ms Davies endured months of headaches, fit, and vision loss 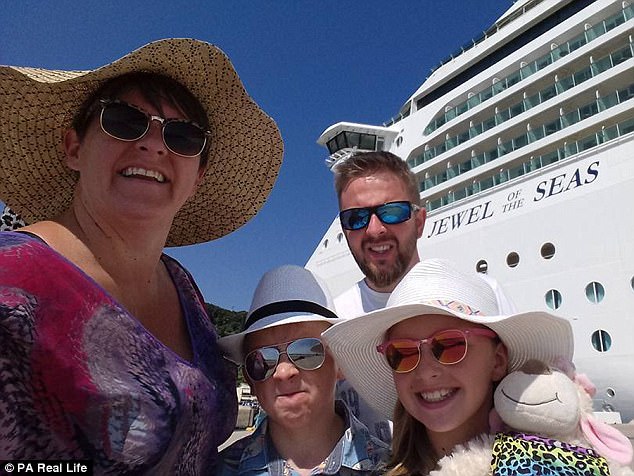 Doctors were unsure of the cause, but Ms Davies booked an eye test to help her sight loss 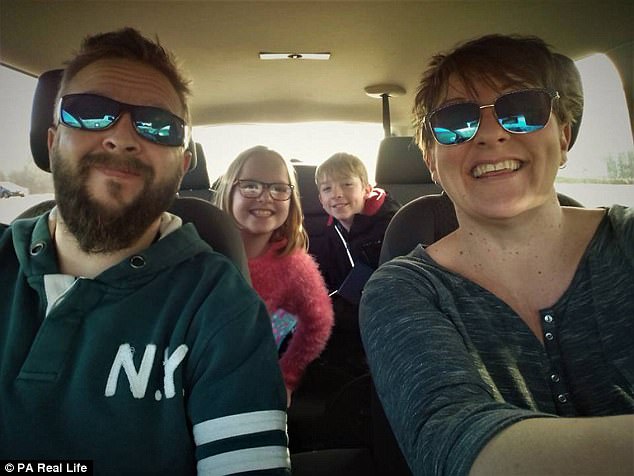 ‘It had been growing for 10 years’

In September 2015, Nicola booked an eye test to at least try and get to the bottom of her deteriorating vision.

Within minutes, the optician spotted something pressing on Ms Davies’ optic nerve and advised her to go to the hospital.

After having CT and MRI scans, Ms Davies was finally diagnosed with a brain tumour.

She said: ‘They told me it was a large one, although I don’t know how big, and that it had been growing for about 10 years.’

‘By spotting the tumour, the optician effectively saved my life. It was quite frightening when doctors told me what it was, but it was also a relief to get a diagnosis and start treatment.’

Referred to a consultant at The University Hospital of Wales in Cardiff, Ms Davies was told she had been experiencing focal epileptic seizures – when an epileptic seizure starts on one side of the brain – but, unusually, she had remained completely conscious the whole time. 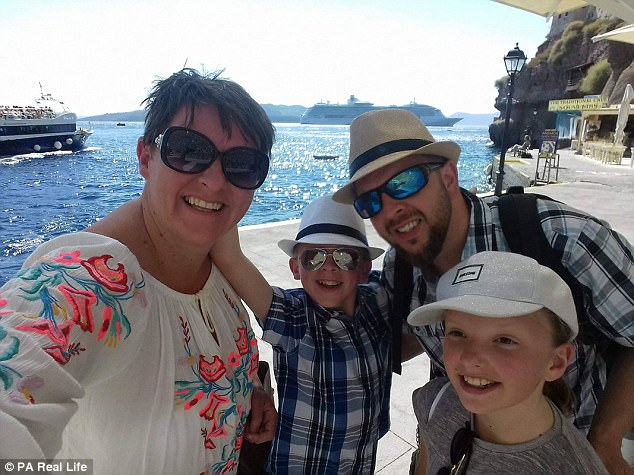 Ms Davies has been left with long-term health problems, including fatigue and hearing loss

‘I’ve been left with long-term problems’

Four weeks after first going to hospital, Ms Davies had a seven-and-a-half hour brain operation to remove 98 per cent of the tumour, known as a meningioma. The procedure required her to shave off her hair and left her with a prominent scar.

Surgeons had to remove her scalp in two parts due to the position of the growth. Ms Davies also required transfusions after losing 25 per cent of her blood during surgery.

Doctors were forced to leave two per cent of the tumour behind, as it was attached to a critical vein.

Ms Davies said: ‘They told me if they had cut into that, I would have died.’

As the tumour was benign, Ms Davies did not require additional treatment after the surgery and was discharged from hospital five days later.

Yet, there is a chance the tumour could grow back and the ordeal has affected Ms Davies’ long-term health, forcing her to give-up work.

She said: ‘The symptoms started to subside after the operation, but it was a long road to recovery.

‘Some damage was already done, so I’ve been left with long-term problems.

‘My hearing is still badly affected and I get tired very easily. I need to have regular check-ups and will need radiotherapy if it starts to grow back.

‘I am so grateful that the optician got to the bottom of it though, as if the tumour had kept growing, it could have eventually killed me.’