Mother’s fury after her young son was ‘SCALPED’ while playing on a ‘death trap’ children’s slide at new £50,000 playground

A mother has been left furious after her young son was ‘scalped’ by hitting his head on a children’s slide at a local playground.

Tasha Spilsbury claims her son Jordan needed emergency surgery after slipping in the sandpit and hitting his head on the metal slide above.

The play castle in Sheerness on the Isle of Sheppey in Kent closed just a week after it opened following a number of injuries and cost the council £50,000.

But after an investigation by officials found there were ‘no faults’ it has re-opened and is being described as a ‘death trap’ by concerned parents.

Jordan suffered the horrific head injury while playing in the park on Tuesday.

He was taken to a specialist plastic surgery unit at the Queen Victoria Hospital in East Grinstead, West Sussex.

His mother shared her anger with locals on Facebook, writing: ‘My son was in the sandpit at Sheerness and slipped on the ground surrounding the castle.

‘He head-butted the metal construction and managed to ‘de-glove’ his scalp to the point where his skull was showing.

‘It was touch and go for a rush to East Grinstead Hospital to have reconstruction on his scalp.’

She warned: ‘This place is extremely unsafe. If no action is taken I will be taking them to court.

‘The place has no lights, no cameras and no security at night. This wasn’t just a bump on the slide. He was scalped.’

Brian Spoor, who chairs the Sheerness Town Team, has called for it to be dismantled.

A petition with more than 300 signatures reads: ‘The council will not accept liability and will not acknowledge that there is any danger. 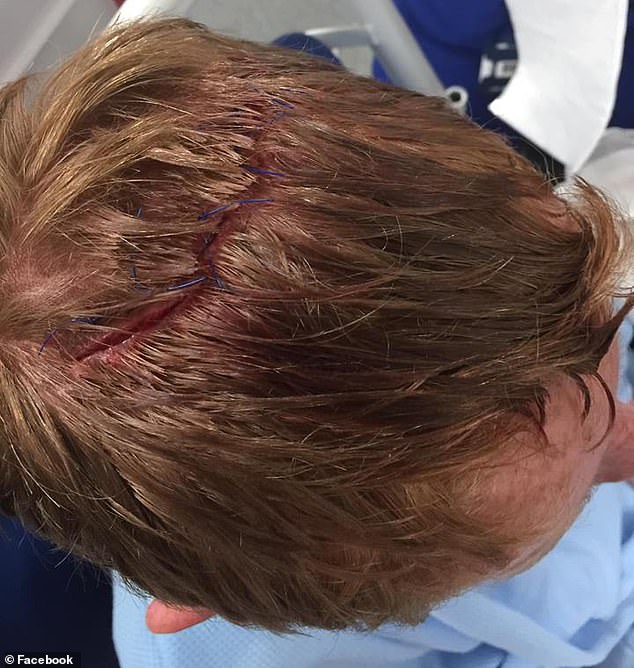 Little Jordan is pictured with his head stitched up after the incident at the park in Sheerness, Isle of Sheppey, Kent

‘This £50,000 investment into the play area has funded nothing but a ‘death-trap’. Young children, as young as 5, are stating that this slide is unsafe and not fit for purpose.’

Ms Spilsbury’s post was met with dozens of angry comments.

Another person posted: ‘OMG thats absolutely horrendous! Poor Jordan! Imagine what this would have done to a much younger child!’

He said: ‘The castle looked great when it was first installed. It has been a fantastic attraction and has been very well used. But it is quite clearly unfit for purpose.

‘Heads should roll. The council should get its money back from the manufacturer and replace it with a good set of swings.

‘The council can’t leave it there. Someone will end up breaking their neck, gashing their throat or dying.’

A spokesman for Swale Borough Council said: ‘We hadn’t received any reports of an accident at the park but now we are aware we are trying to contact those involved to investigate what happened.’